Sadly, the astronauts weren't allowed to taste the cookies before the batch was sent down to Earth for further research. 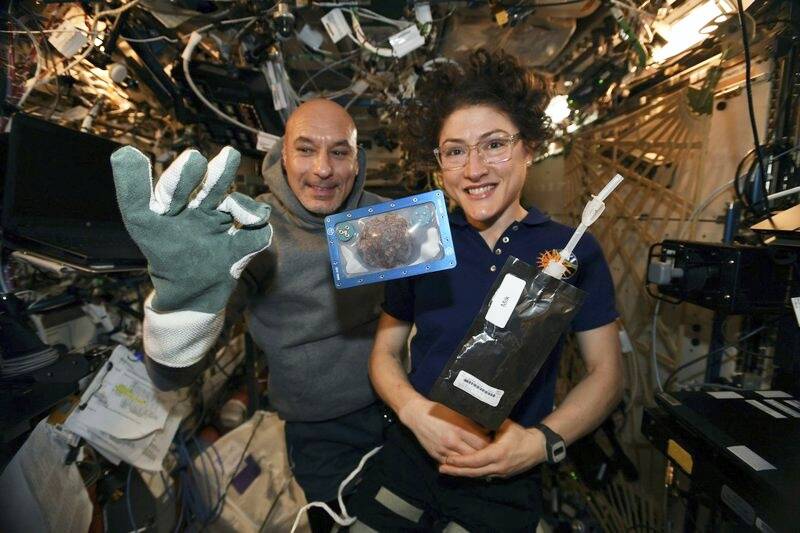 If you were wondering what the astronauts aboard the International Space Station (ISS) were up to this holiday season, you’ll be happy to learn that they were enjoying their own festivities — and baking history’s first-ever batch of space cookies.

As reported by the Associated Press, a special zero-gravity oven was sent to the space station in November so the astronauts could conduct some delicious experiments in zero-gravity baking.

“We made space cookies and milk for Santa this year,” NASA astronaut Christina Koch tweeted, posing with one of the tightly air-sealed space cookies. “Happy holidays from the @Space_Station!”

Not much is known about the space-baked chocolate chip cookies — other than the fact that they don’t look that appetizing. Unfortunately, Koch (who also made history recently by claiming the title of the longest spaceflight by any woman astronaut upon completing her 292nd day high above Earth’s atmosphere) and the other astronauts have no idea what these space cookies taste like because they weren’t allowed to eat them. Instead, the cookies arrived back on Earth this week for analysis.

The pre-made dough used to bake the cookies, which took three days to arrive at the ISS on the Cygnus capsule, was provided by Hilton’s DoubleTree hotel chain, popularly known for their to-go cookie treats dispensed at every location. A hotel spokesperson called the event a “landmark microgravity experiment” meant to make long-duration space travel “more hospitable.”

The hotel also stated that the astronauts had successfully baked five cookies using the custom zero-gravity oven. So far, the company has not shared further details about the space-baking experiment but more details are expected to be released in the coming weeks.

Footage of space cookies being made in a zero-gravity oven along with an explanation of the process.

For now, we do know that Koch’s team used a zero-gravity oven, a cylinder-shaped, insulated container designed to bake goods in an extreme environment like that of the ISS. The oven holds food steady while it bakes and later cools it on a built-in cooling rack.

Because microgravity makes convection difficult, the temperatures needed for baking are generated via electric heating components similar to those found in a toaster oven. A pocket of heat around the food inside the insulated container allows the dough to bake.

The space-baking experiment is part of NASA’s attempt to figure out the impact that high heat and zero gravity have on the shape and consistency of baked goods. The end goals seems to be figuring out a way to cook food in space because NASA contends that being able to eat flavorful, cooked meals while in space could have both psychological and physiological benefits for the astronauts. 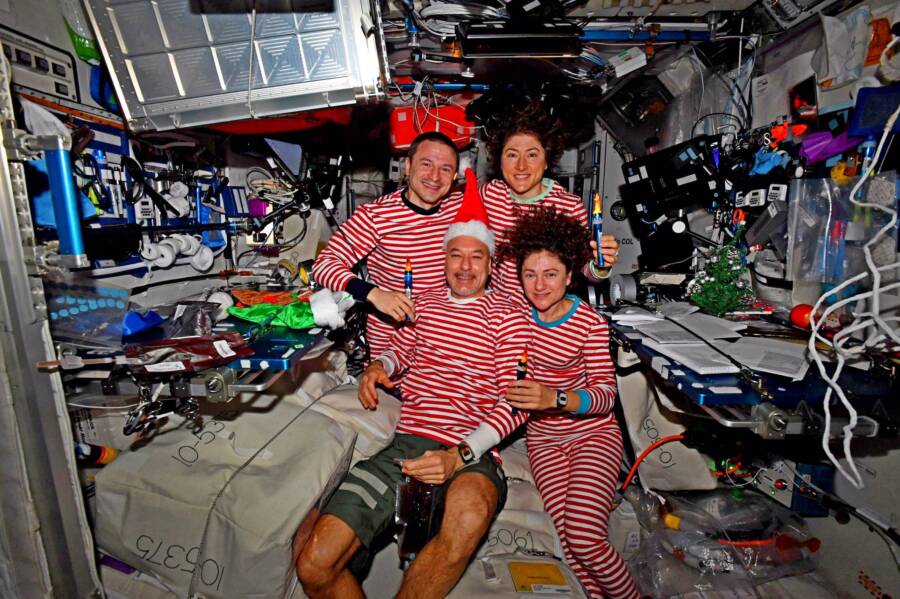 Andrew Morgan/TwitterThe crew of the International Space Station decked out in holiday gear during Christmas.

This is just the latest in NASA’s ongoing experiments to bring a bit of Earth to the ISS. Astronauts aboard the station have also successfully been growing plants and, like baking or cooking real food, performing these kinds of activities in space provides a multitude of benefits for the crew and their mental health.

When you’re floating through space some 220 miles away from the rest of humankind, the small comforts of home can no doubt make a big difference.

“There’s a great deal of joy in growing and watering the plants and producing a flower,” ISS Chief Scientist Julie Robinson said of the station’s agriculture project.

Surely baking those space cookies brought the astronauts some of that same joy.

Next, read about why NASA sent sperm samples into orbit. Then, learn about all the weird things that happen when you spend time in space.