Archaeologists are not sure if this Neolithic structure was used as a labyrinth, a ritual gathering spot, or as a fortification. 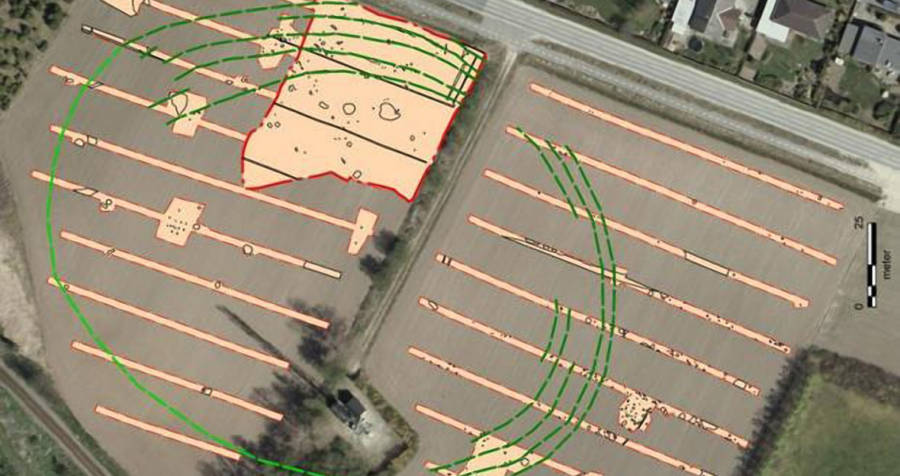 Danish Geodata Agency/Pernille Rohde Sloth The excavated area is marked in red, while the green lines are where the palisade rows are expected to be.

Archaeologists in Denmark have uncovered a bizarre labyrinth that dates back to the Neolithic period, and nobody is quite sure what it was meant for.

The labyrinth itself seems to have been an oval palisade enclosure with roughly 60,000 square feet of space inside. Located some 40 miles from Copenhagen, the structure is situated in a piece of land near Stevns that is intended to be the home of a sports arena.

And nothing quite like this has been found here before.

“Since 2013, rescue archaeology related to large-scale development of infrastructure has allowed us to locate a number of features, but we very rarely get the opportunity to reveal such a big part of a palisade enclosure,” Pernille Rohde Sloth, the archaeologist from the Museum Southeast Denmark who led the excavation, told Seeker.

So far, Sloth and her team so far have found artifacts in the pit that date back roughly 4,900 years. These artifacts are typical of Middle Neolithic Funnel Beaker Culture, which is comprised of the first farmers in Scandinavia and the north European plain, according to Seeker.

“The pits contained numerous flint flakes … Some pits also held ceramic sherds and axe fragments,” Sloth said. “The results of radiocarbon dating can give more detailed information about the period of construction and use … The current picture does not tell us whether all five palisade rows were built at the same time or for how long the structure was used.”

As to what the structure was meant for, a labyrinth is the best guess. Palisades were used in the Neolithic period as a way to build fortifications and protect villagers from marauding tribes, but this structure is very peculiar.

“The openings in the parallel fence rows are not always opposite one another,” Sloth said. “It has been suggested that the fence rows and their openings form a sort of labyrinth.”

However, some think that the structure was used for ritual gatherings, a common occurrence in the Early and Middle Neolithic periods.

“The palisade enclosure in Stevns thus reflects a sort of continuity in ritual practice,” said Mette Madsen, an archaeologist and curator at the Museum Southeast Denmark, to Seeker. “[The Stevns structure] clearly shows some new tendencies as well, and the rituals themselves remain somewhat elusive.”

Still, if there’s one thing that is known for sure, it is that more work needs to be done. The inside of the labyrinth has yet to be excavated, although Sloth says her team will be tackling that task soon.

Next, check out the McDonald’s that recently opened up over an ancient Roman road, before finding out about the rare child footprints that were uncovered at an ancient Egyptian royal temple. Finally, step inside some of the world’s oldest structures.