The Incredible Story Of Starfish Prime, When The U.S. Detonated A Nuclear Bomb In Space

On July 9, 1962, the Atomic Energy Commission set off a 1.4-megaton thermonuclear warhead in outer space, 240 miles above the Pacific Ocean near Hawaii. 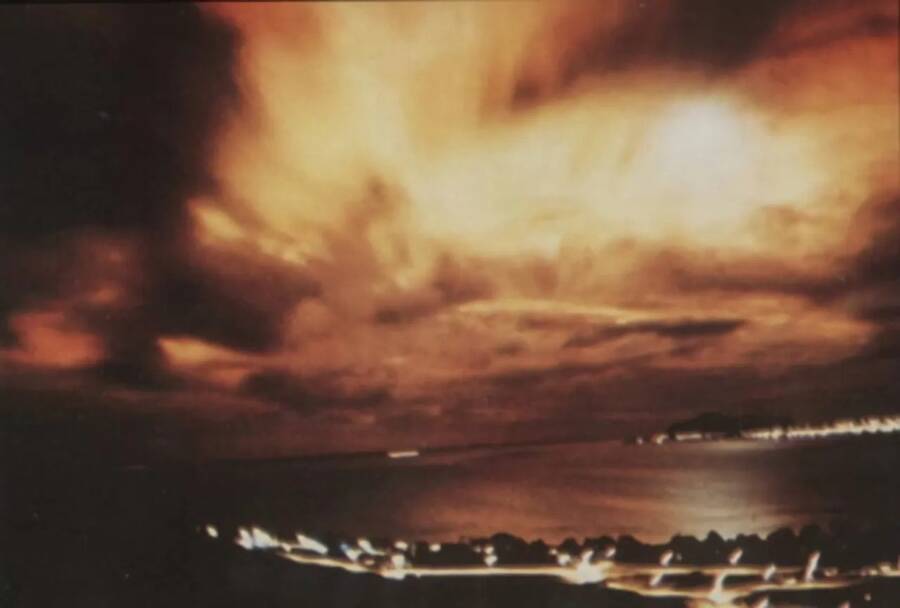 Public DomainA view of the nuclear explosion in space caused by Starfish Prime from Honolulu, Hawaii, 900 miles away.

On a summer night in 1962, the sky above the Pacific Ocean suddenly burst into an array of stunning colors visible from Hawaii to New Zealand. But the gorgeous show was no quirk of nature. It was actually the effect of a high-altitude nuclear bomb test called Starfish Prime.

Launched by the United States, Starfish Prime was part of Operation Fishbowl, a series of nuclear tests that aimed to achieve two goals: to rattle the American nuclear saber and to simply see what would happen when a nuclear bomb exploded at a high altitude.

But no one predicted what would happen after the Starfish Prime test, the biggest nuclear test the U.S. ever conducted in space. In its aftermath, satellites failed, electrical services faltered, and radiation lingered in the atmosphere for years.

Why Did The U.S. Launch Starfish Prime?

By the time the U.S. conducted the Starfish Prime nuclear test, nearly 20 years had passed since the atomic bombing of Hiroshima and Nagasaki during World War II. So why did the U.S. decide to test a nuke in space?

One reason was the Soviet Union. Though the two nuclear powers had circled each other since the Soviets successfully tested nuclear weapons in 1949, the U.S. and the U.S.S.R. had agreed to suspend atmospheric nuclear weapons testing in 1958.

By 1961, however, the U.S.S.R. had started testing nuclear weapons again. And the U.S. — concerned that a high-altitude nuclear bomb launched by the Soviets could knock out U.S. intercontinental missiles — started to develop its own high-altitude tests for a project codenamed Operation Fishbowl. 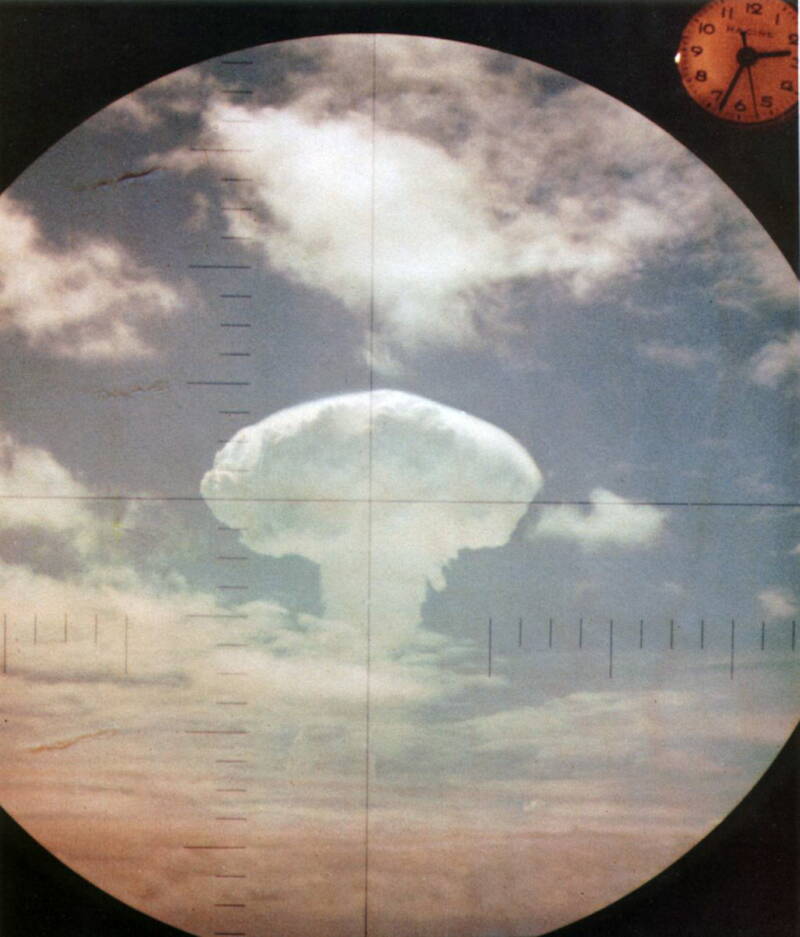 Universal History Archive/Universal Images Group via Getty ImagesA nuclear explosion during Operation Dominic, of which Operation Fishbowl was a part, in May 1962.

But as Smithsonian Magazine explains, the U.S. wanted to test high-altitude nuclear weapons for reasons beyond competing with the Soviet Union.

In 1958, a physicist named James A. Van Allen announced his discovery of belts of radiation in outer space — dubbed Van Allen belts — that some believed would make space travel impossible. Others have hypothesized that the U.S. also theorized that these belts could be weaponized.

Operation Fishbowl sought to see what would happen to the belts after a nuclear explosion in space. But of its five tests, Starfish Prime would be the biggest.

Inside The Starfish Nuclear Test

The United States made no secret of its Starfish Prime test, which was scheduled for July 9, 1962 (following a failed launch on June 20). Smithsonian Magazine reports that news of the test inspired protests all over the world, as well as viewing parties in Hawaii. There, one Honolulu newspaper declared: “N-Blast Tonight May Be Dazzling; Good View Likely.”

Starfish Prime was launched shortly after 11 p.m. Thirteen minutes later, the 1.45-megaton hydrogen bomb exploded about 250 miles above Johnston Island in the Pacific Ocean — and the sky erupted.

“[A] brilliant white flash burned through the clouds rapidly changing to an expanding green ball of irradiance extending into the clear sky above the overcast,” an eyewitness said, per a military report. 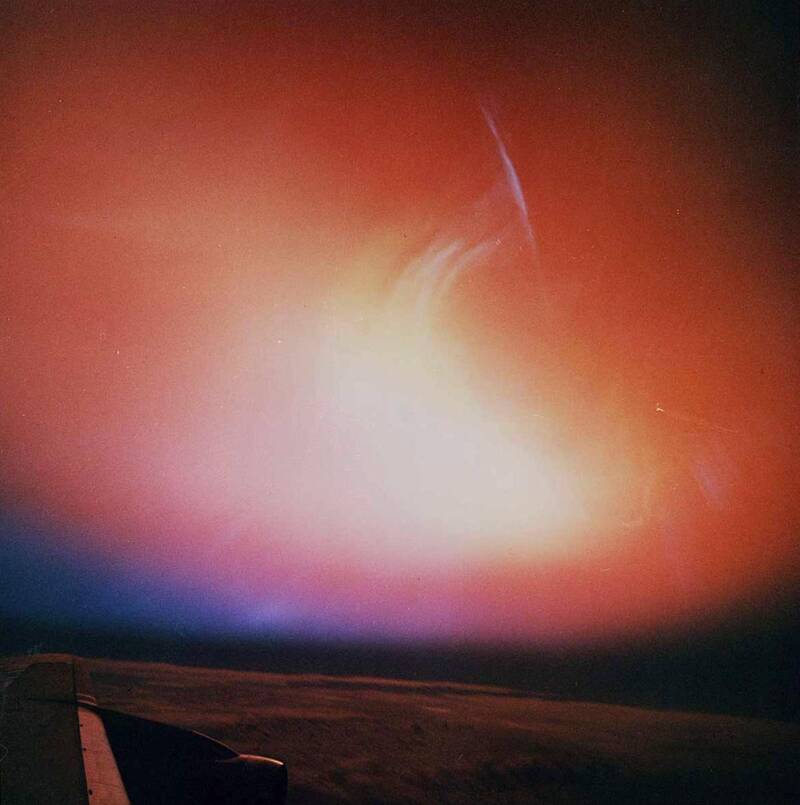 The Atomic ArchiveWitnesses described how Starfish Prime lit up the entire sky in an array of dazzling colors.

The witness described “great white fingers” like an unclenching fist, green, purple, and red lights, the sky dully burning, blocking out the stars, and “tremendous white rainbows” which dazzled for seven straight minutes.

The Hilo Tribune-Herald described the explosion by writing: “It looked as though the heavens had belched forth a new sun that flared briefly, but long enough to set the sky on fire.”

Other witnesses remembered that the whole sky lit up “in every direction” as if it were noon, and some spectators as far as Fiji — about 2,000 miles from the Johnston Island launch — called the explosion “breathtaking.”

The Disastrous Impact Of The Explosion

Starfish Prime did more than light up the sky. After the explosion, streetlights in Hawaii went dark, telephones stopped working, airplanes had electrical surges, and radios went quiet.

“Some electronic and electrical systems in the Hawaiian Islands, 1400 kilometers [almost 900 miles] distant, were affected,” noted a 2012 report about Starfish Prime, “causing the failure of street-lighting systems, tripping of circuit breakers, triggering of burglar alarms, and damage to a telecommunications relay facility.”

Footage of the Starfish Prime explosion in space.

What’s more, the radiation wave from Starfish Prime shredded satellites in its path. The explosion destroyed Telstar 1, the first satellite to broadcast a live television signal, Ariel-1, Britain’s first satellite, and a handful of others.

“It came as a surprise how bad it was, and how long it lasted, and how damaging it was to satellites that flew through that area and died,” David Sibeck of NASA acknowledged.

Starfish Prime may have been visible for mere minutes, but it would affect the Earth for years to come. According to National Geographic, the explosion created an artificial radiation belt that lingered in space for a full decade. This belt was even stronger than the Van Allen belts.

But the era of high-altitude nuclear testing was short-lived. Though the U.S. and the U.S.S.R. continued to conduct similar tests, the Cuban Missile Crisis of October 1962 spooked both superpowers. Each recognized that the world had come dangerously close to full-out nuclear war.

“It is insane that two men, sitting on opposite sides of the world, should be able to decide to bring an end to civilization,” President John F. Kennedy remarked at a White House meeting, according to the JFK Library. 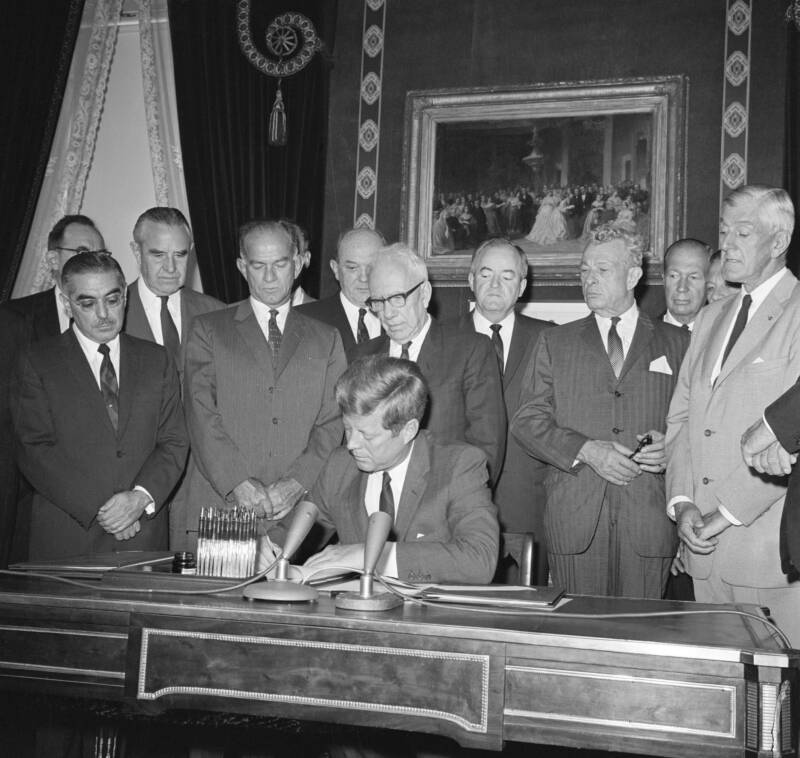 Bettmann/Getty ImagesPresident John F. Kennedy signs the Limited Nuclear Test Ban Treaty in October 1963 after it was ratified by the U.S. Senate.

Introducing A Ban On Nuclear Tests In Space

Kennedy and Soviet Premier Nikita Khrushchev opened a private dialogue which led to the signing of the Limited Nuclear Test Ban Treaty in July 1963. The treaty banned nuclear testing underwater, in the atmosphere, or in outer space, which meant that American scientists wouldn’t conduct experiments similar to Starfish Prime anytime soon.

That said, high-altitude nuclear explosions continue to be a national security concern.

As Science points out, the U.S. and Russia would probably not use high-altitude nuclear weapons today because of the damage they could incur on worldwide satellites, including American and Russian ones. But nuclear powers like North Korea have no satellites, and could potentially explode a bomb that made the world’s communications go dark.

This, or even a powerful geomagnetic storm, could potentially affect everything from computer chips to cars. According to National Geographic and Science, researchers are working now on how to “drain” radioactivity from the atmosphere in the unlikely event that a bomb goes off in space.

In that way, the Starfish Prime explosion — and the surprising way it disabled satellites in 1962 — helped educate scientists on the impact of radiation in space. But it also offered a terrifying glimpse at the deadly and destructive potential of nuclear weapons, especially when they’re detonated high above the Earth.

After reading about the 1962 Starfish Prime test, look through these harrowing photos of nuclear tests. Or, discover the story of the Soviet Tsar Bomba that was bigger than the bombs dropped on Hiroshima and Nagasaki combined.