Stevie Ray Vaughan is often credited with reviving blues guitar in his heyday, but his spectacular musical career was cut short by a tragic helicopter accident when he was just 35. 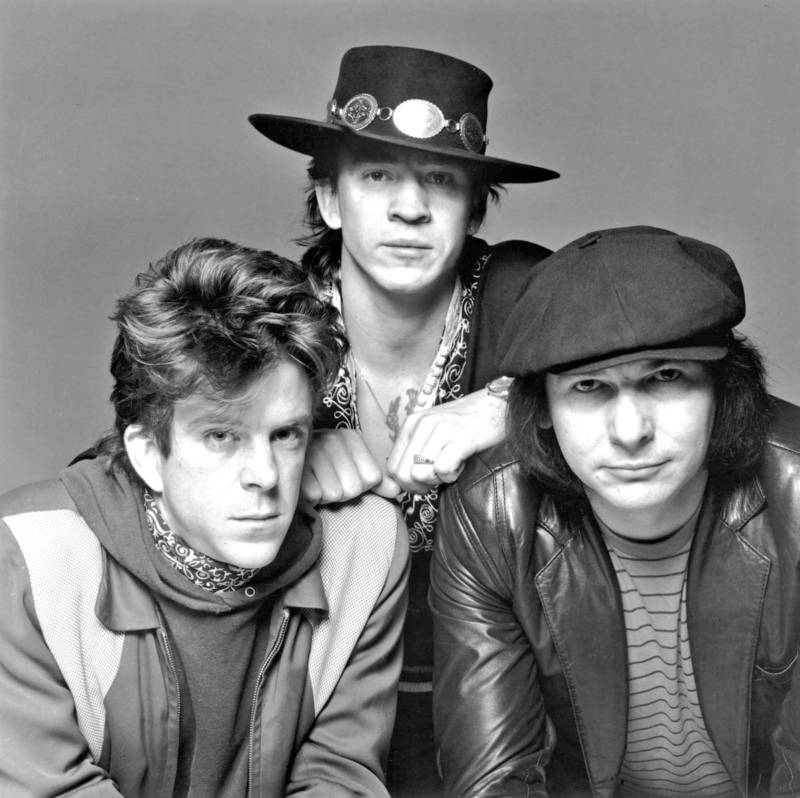 Wikimedia Commons Stevie Ray Vaughan, center and with his distinctive hat, with his band Double Trouble in 1983.

Stevie Ray Vaughan was a celebrated blues guitarist and was largely seen as a talent that could revitalize the genre. Critics compared his style to that of Jimi Hendrix, Otis Rush, and Muddy Waters. All four of his major studio albums were commercial successes, and he played to sold-out stadiums across the world. But Stevie Ray Vaughan’s death would bring a sudden and tragic end to his fantastic career.

At age 35, Stevie Ray Vaughan was killed in a late-night helicopter crash in Wisconsin. The accident has been hailed preventable since, and the music world was never the same. 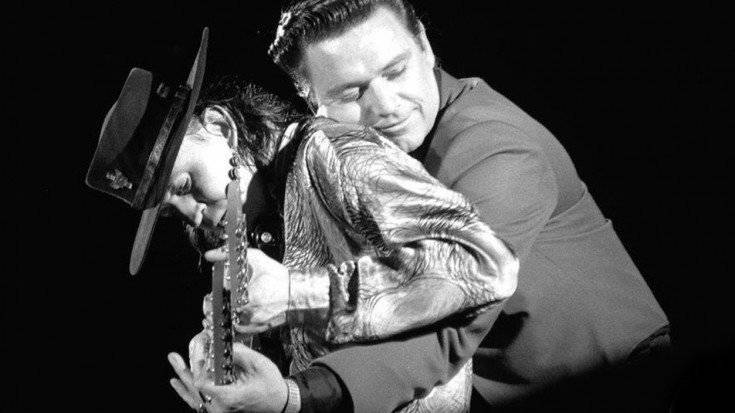 Stevie is hugged by his brother Jimmie.

Vaughan was born On Oct. 3, 1954 in Dallas, Texas. Inspired by his older brother Jimmie, the blues legend picked up a plastic toy guitar at age 10 and taught himself how to play. He never learned to read sheet music, but Vaughan proved to have had an extraordinary ear. By the time he reached high school, he had already played with several bands across the Dallas club scene.

As Vaughan became a regular at Dallas nightclubs, he forewent a typical college route, though he did receive a small stipend from Southern Methodist University which he used to move to Austin, which was then the center of Texas’ music scene in the ’70s.

Money was tight, and the would-be star collected soda and beer bottles for money while crashing at friends’ homes.

But the hard work was paying off. By 1982, Vaughan and his band, Double Trouble, were well-known in Texas. The band had even been recognized by the Rolling Stones’ Mick Jagger, who invited Vaughan and his bandmates to play at a private concert in New York.

Stardom came soon after. David Bowie heard Double Trouble in Switzerland and consequently invited the group to play on his forthcoming album Let’s Dance — and the rest is history. 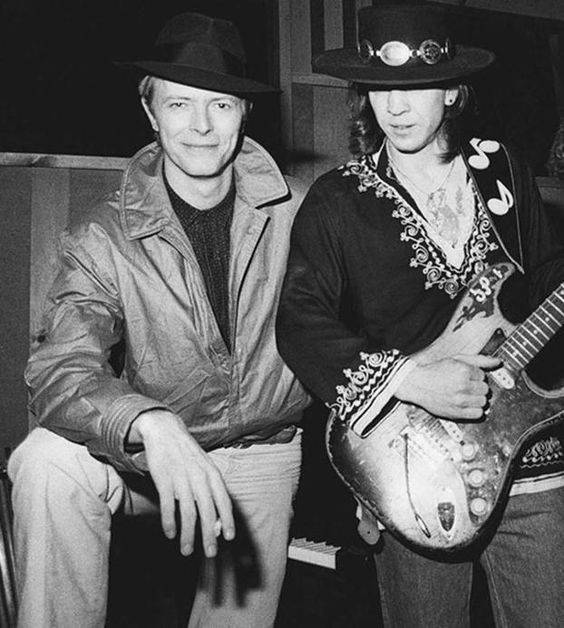 Double Trouble signed a record deal with Epic, and they came under the tutelage of John Hammond Sr., the legendary talent scout responsible for the careers of Aretha Franklin, Bruce Springsteen, Bob Dylan and Count Basie, among others.

Vaughan was achieving mainstream success and he had become a two-time Grammy-award winning guitarist, but his personal life was gradually coming to tatters. He divorced his wife Lenora Darlene Bailey in 1979, and suffered drug and alcohol addiction. He checked himself into rehab in 1986 following a collapse while on tour in Germany.

Vaughan pushed himself through his struggles and continued to perform with the likes of Robert Plant, Eric Clapton, and Buddy Guy. He was at the height of his career in the summer of 1990, when he decided to record an album with his brother Jimmie.

That same summer, Vaughan and Double Trouble embarked on a headlining tour across the United States. After a concert in Wisconsin on Aug. 26, 1990, Stevie Ray boarded a helicopter bound for Chicago.

There were three seats intended for Stevie, his brother Jimmie and Jimmie’s wife Connie, but members of Clapton’s crew had taken up two of those seats. The blues rocker climbed on board the chopper with Clapton’s crew. Stevie, consequently, went without his brother and sister-in-law onto that fateful flight.

The helicopter departed at 12:50 a.m. But minutes afterward about half a mile after taking off, Vaughan’s chopper crashed into a mountainside near the Alpine Valley ski resort.

No fire nor explosion accompanied the crash. The bodies and debris were scattered over an area of 200 square feet. No one knew of the crash until hours later when the aircraft failed to show up at its destination the following day.

Deputies arrived at the crash site at 7 a.m. The helicopter had hit a hillside 50 feet from its peak. A report on the accident claimed that no drugs or alcohol were involved and all victims were wearing seatbelts. The report also ruled out mechanical failures and malfunctions. The NTSB concluded that fog was a factor in the crash, as was the hilly terrain: the pilot simply did not see the hillside.

Everyone on board Vaughan’s helicopter died instantly, mostly from blunt-force trauma, according to the autopsy report. Stevie Ray Vaughan died at just 35-years-old. 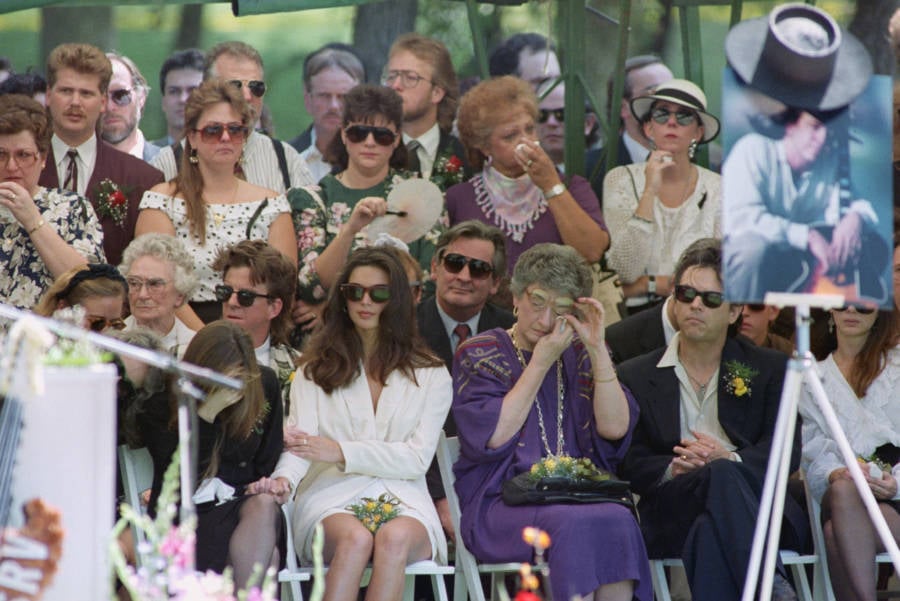 Getty ImagesMartha Vaughn, mother of Stevie Ray Vaughn is center. To the left is Vaughn’s girl friend Janna Lapidus, to the right of Martha is Vaughn’s brother Jimmie Lee Vaughn.

Tributes and outpourings of grief followed Vaughan’s death. In the spring of 1990, Stevie and Jimmy recorded studio tracks for the album Family Style before going on tour. After its release in October of 1990, two months after Vaughan’s death, sales of the album went through the roof.

But sales of the posthumous albums eclipsed those that came out when Vaughan was alive — as if in perfect tribute to the star’s brief but brilliant career.

After learning about Stevie Ray Vaughan’s death, read about 10 of the 27 Club members and their tragic ends. Then, check out Lee Morgan, the jazz musician shot to death by his own wife.