A new study analyzes the fur, feathers, and plant matter found in the 8,000-year-old grave of a young child.

Recently, a team of archaeologists working in eastern Finland made a fascinating discovery in the grave of a Stone Age child dating back 8,000 years. When they sifted through the soil, they found that various canine hairs were present alongside the body.

As Live Science reports, though many of the hairs had badly deteriorated, their presence in the grave could imply that a dog or wolf was laid to rest at the child’s feet.

“Dogs interred with the deceased have been found in, for example, Skateholm, a famous burial site in southern Sweden dating back some 7,000 years,” said Kristiina Mannermaa, a researcher and associate professor in the Department of Cultures at the University of Helsinki. “The discovery in Majoonsuo is sensational, even though there is nothing but hairs left of the animal or animals — not even teeth.”

The Stone Age grave was first discovered in Majoonsuo in 1991 when researchers noticed that a gravel roadway had been stained by red ochre, iron-rich clay commonly associated with burial sites. In 2018, a team from the Finnish Heritage Agency again examined the site and determined it was “at risk of destruction” due to traffic and erosion. Fearing its loss, researchers began excavating the site that same year. 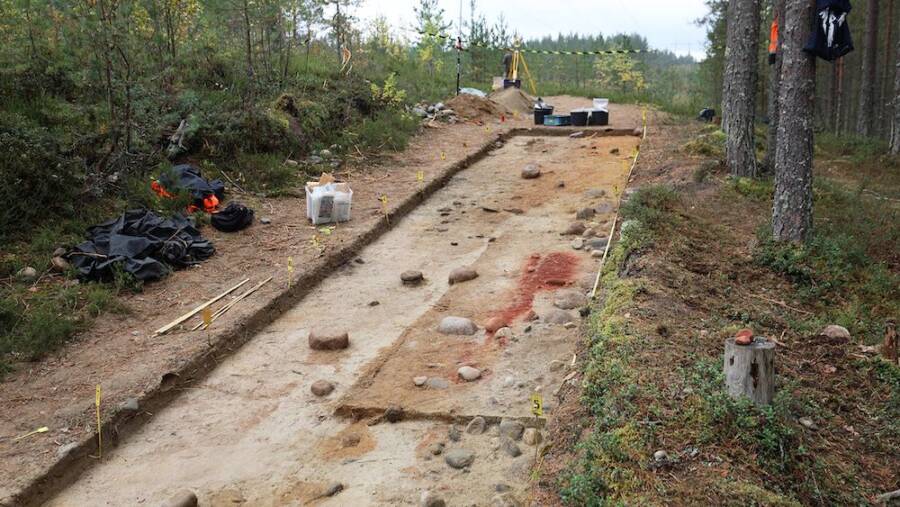 Kristiina Mannermaa/University of HelsinkiThe large stain caused by red ochre led the team of archaeologists to begin investigating the site.

Finland’s soil is highly acidic, meaning organic matter is rarely preserved well, so archaeologists weren’t surprised when they discovered there were few remains left in the grave. However, they did find the teeth of a Stone Age child who, based on dental analysis, died between the ages of three and 10.

In addition, microscopic analysis of the soil itself revealed that traces of animal fur were still present. Researchers published the results of their study of the grave’s contents in the journal PLOS One.

Along with the teeth and canine fur, researchers found fragments of bird feathers and plant fibers, all of which in combination offer insight into how Stone Age humans treated their deceased.

The collection of feathers may mean that the child was laid to rest on a small downy bed or perhaps wrapped in a feather parka.

A falcon’s feather was also among the assortment. It was possibly part of an arrow or worn as a decoration by the child.

And of course, there was the canine fur. “We don’t even know whether it’s a dog or a wolf,” Mannermaa explained. 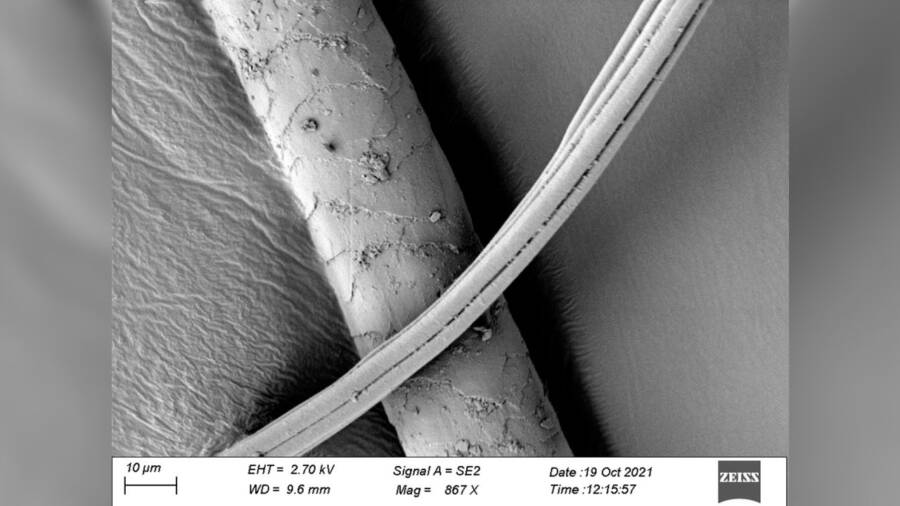 Tuija Kirkinen/University of HelsinkiOne of the canine hair fragments retrieved from the grave, examined under microscope.

The study’s lead author Tuija Kirkinen, a postdoctoral researcher in the University of Helsinki’s Department of Cultures, and her team collected 60 bags of soil samples for analysis. They separated organic matter from the soil with water, after which three laboratories analyzed the samples for microparticles and fatty acids.

Kirkinen is a member of the Animals Make Identities project, which is led by Mannermaa and seeks to identify the “social links between humans and animals in hunter-gatherer burial sites” in northeastern Europe. The hope is that by identifying these connections, researchers can learn more about what life was like for ancient humans living as far back as 9,000 years ago.

“The work is really slow and it really made my heart jump when I found minuscule fragments of past garments and grave furnishings, especially in Finland, where all unburnt bones tend to decompose,” Kirkinen said. “This all gives us a very valuable insight about burial habits in the Stone Age, indicating how people had prepared the child for the journey after death.”

After reading about this glimpse into Stone Age life, learn about the Stone Age settlement that was found at the bottom of a Finnish lake. Or, read about the strange Stone Age burial site found in Sweden that left researchers baffled.