A self-taught slave who escaped to freedom, Susie King Taylor educated African American soldiers at a time when it was illegal for a Black woman to read. 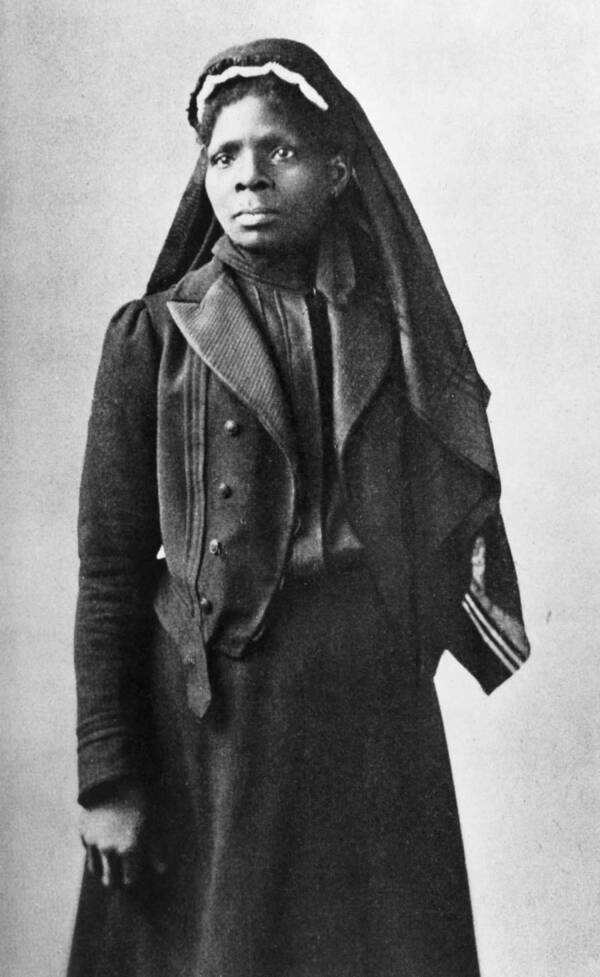 In 1850s Georgia, in the deep American South just before the outbreak of the Civil War, a young Black woman dared to read. Even though it was illegal, Susie King Taylor’s grandmother was adamant that she become literate, and she ensured that her books were wrapped and hidden from the police. Without her grandmother’s urging, Taylor would not have become the barrier-breaking icon she is known for today.

As the Civil War loomed, Taylor was forced to flee with her family to St. Simon’s Island, a Union-controlled outpost that proved pivotal in Taylor’s young life. Precocious and well-read, Taylor impressed the Union Army soldiers so that they even asked her to become a teacher for the freed Black soldiers in their ranks. She became the first Black teacher of freed Black students — a historic feat she’d soon eclipse.

At Camp Saxton, home of one of the first Black regiments in the Union Army, Taylor then became the first Black Army nurse. She was not yet 18 years old — and her story had just begun.

Susie King Taylor Educated Herself Despite The Risk

Susie King Taylor, née Susan Ann Baker, was born into slavery on Aug. 6, 1848. She spent her childhood on the Great Plantation in Liberty County, Georgia. But when Taylor turned seven, her mother sent her to live with her grandmother, Dolly, in Savannah.

Dolly arranged for Taylor to attend two secret schools that were taught by free Black women and family friends. Everyone involved knew the risk in educating their children in the Antebellum South.

Taylor quickly transcended the intellectual capacity of her teachers, but as she thrived in the classroom, war began to brew in the country. In April 1861, the Civil War erupted when Confederate forces fired on Fort Sumter, South Carolina. Deadly skirmishes forced Taylor to move back home in April 1862, although things weren’t much safer there. 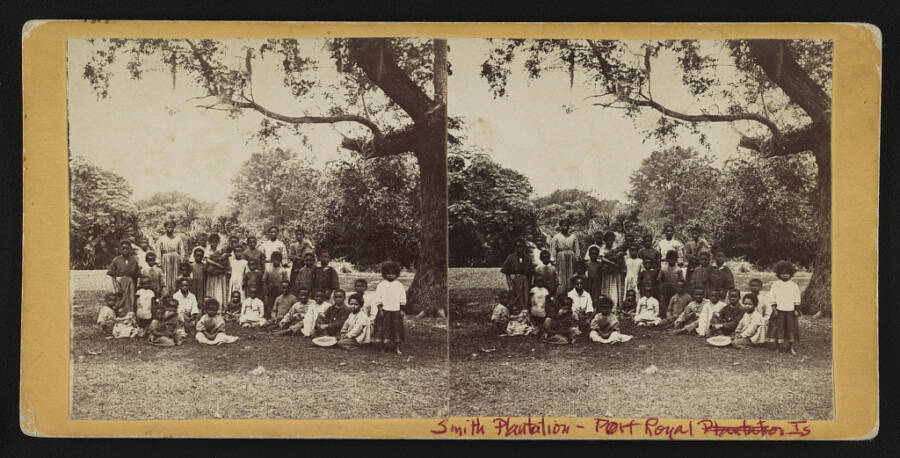 Library of CongressFreed Black men on the Smith Plantation near Camp Saxton on Port Royal Island in South Carolina. By the end of the war, 186,000 slaves had joined the Union Army.

Taylor and her family found safe passage to St. Simon’s Island aboard the Union ship USS Potomska, where Taylor impressed Commander Lieutenant Pendleton G. Watmough so much with her intellect that he gave her a job upon their arrival at the Union base.

“He was surprised by my accomplishments (for they were such in those days), for he said he did not know there were any negroes in the South able to read and write,” she later recalled in her memoir, Reminiscences of My Life in Camp: An African American Woman’s Civil War Memoir.

Taylor taught up to 40 illiterate children by day and even more adults by night. She was just 14 years old at the time.

When the island was evacuated that October, Taylor moved to Beaufort, South Carolina where she settled at Camp Saxton and tended to the all-Black 1st South Carolina Volunteers Infantry Regiment (later named the 33rd U.S. Colored Infantry Regiment), which was a legion of escaped slaves who joined in the Union’s fight against the Confederacy and the institution that dehumanized them.

The all-Black 1st South Carolina Volunteers inspired a change in the Union Army’s mindset toward Black soldiers. Earlier in the war, Union soldiers simply sent escaped slaves back to their owners, but now Union officials classified them as “contraband” so that they could be legally conscripted into service. 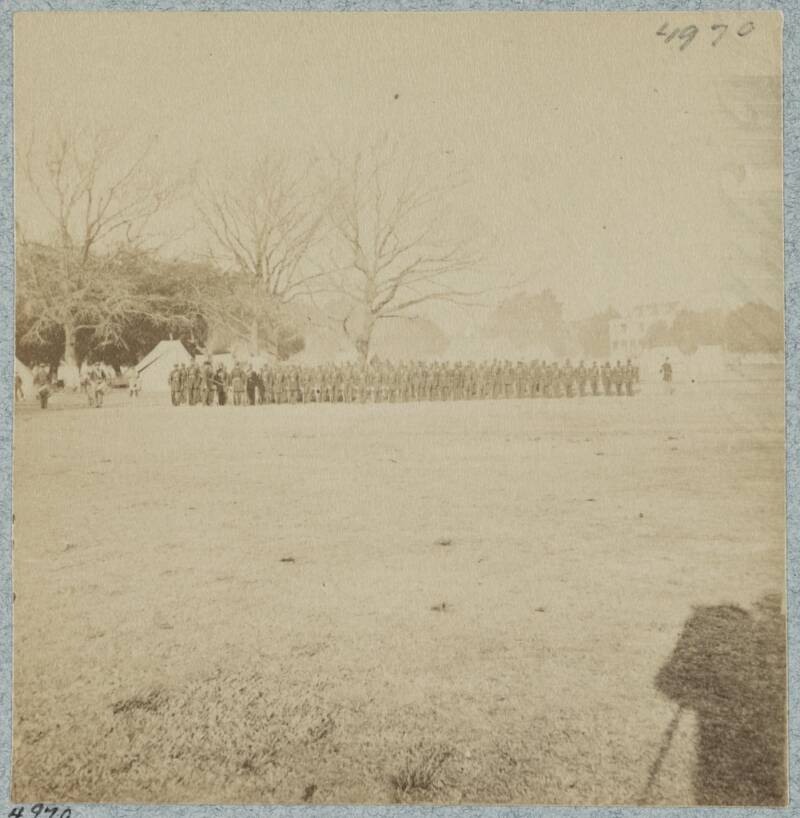 Library of CongressThe 1st South Carolina Volunteers during a dress parade in Beaufort, South Carolina, 1862. Though the brigade was all Black, its leaders were white, as was common in segregated infantries.

Although she was officially designated a “laundress” to this brigade, Taylor did more for the Union Army than wash clothes. Her dedicated physical care made her the first Black Army nurse in American history.

She Was An Invaluable Civil War Nurse

While in the service of the Volunteers, Taylor formed deep friendships with the colonels who saw past their racial differences.

The Volunteers were formed on Nov. 1, 1862, by Colonel Thomas Wentworth Higginson and Lieutenant Colonel Charles T. Trowbridge, both of whom would befriend Taylor. Higginson was a staunch abolitionist and Trowbridge, who later replaced him, was respected by his all-Black regiment. One of his soldiers was Sergeant Edward King, whom Taylor married — and accompanied during his tour. 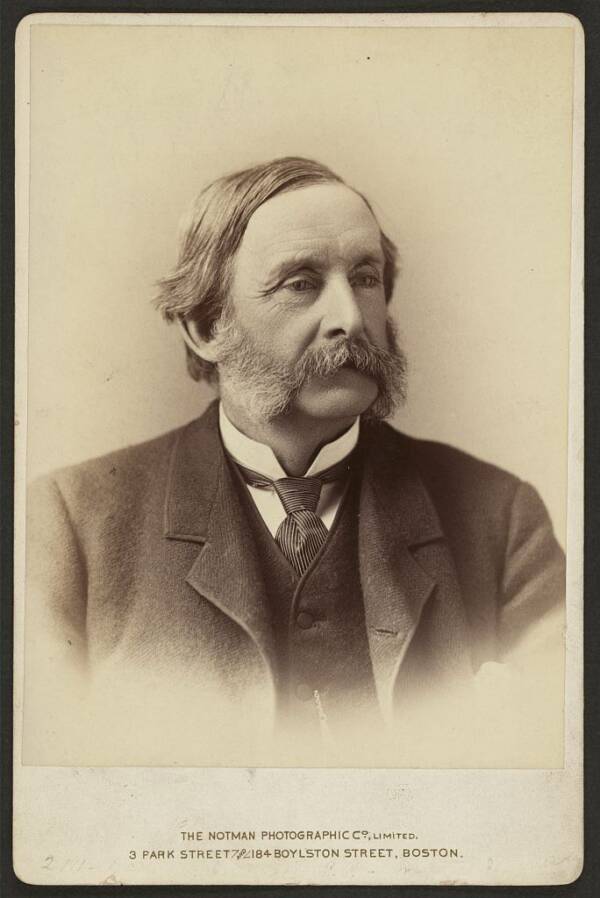 Library of CongressColonel Thomas Higginson — abolitionist and leader of the Volunteers.

The famed abolitionist and Underground Railroad conductor Harriet Tubman also worked with the Volunteers at this time. Tubman acted as a nurse, scout, and spy. It’s unclear whether Taylor ever met Tubman, as Taylor had her hands full tending to ill and wounded men.

Taylor fearlessly helped soldiers inflicted with malaria, measles, cholera, and smallpox. “I was not in the least bit afraid of the small-pox,” Taylor wrote. “I had been vaccinated, and I drank sassafras tea constantly, which kept my blood purged and prevented me from contracting this dreaded scourge.”

When she wasn’t teaching Company E soldiers how to read and write, Taylor learned how to shoot a musket and kept the cartridges in the Army’s guns dry.

But Taylor would see little reward for her hard work. Nurses received pay and pensions, but laundresses did not. Trowbridge later apologized for what this “technicality” in her title cost her. 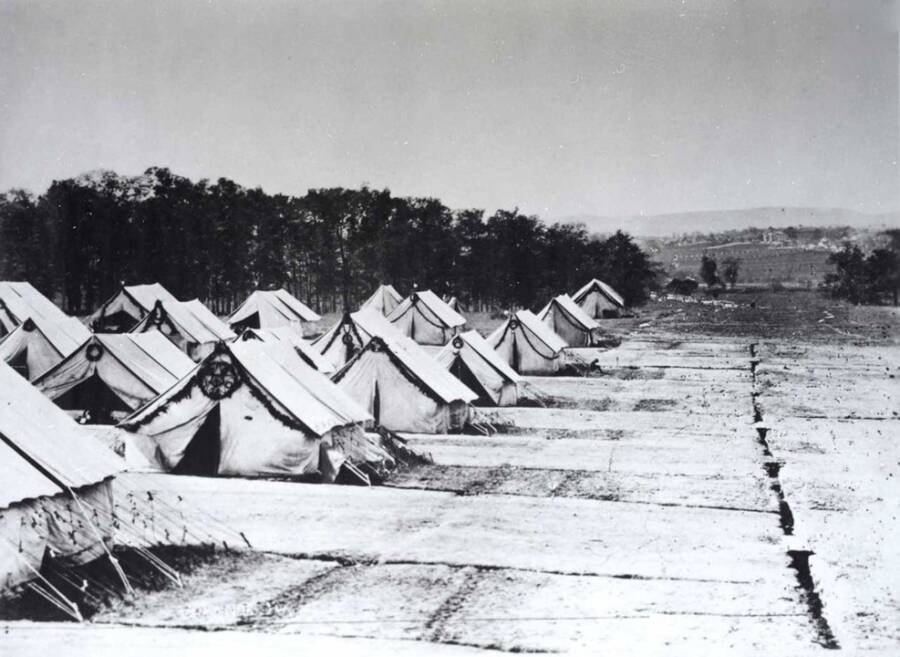 Wikimedia CommonsCamp Letterman, a military hospital near the Gettysburg Battlefield, which treated more than 14,000 Union and 6,800 Confederate soldiers following the historically bloody clash.

Nonetheless, in March 1863, the Volunteers were ordered to march to Florida — and Taylor determinedly followed to help.

She Marched With The Union Army Across The Nation

As the brigade marched into Florida, they were met with a legion of Confederates in blackface. “They were hiding behind a house about a mile or so away, their faces blackened to disguise themselves as negroes,” Taylor wrote. “And our boys, as they advanced toward them, halted a second, saying, ‘They are black men!'” 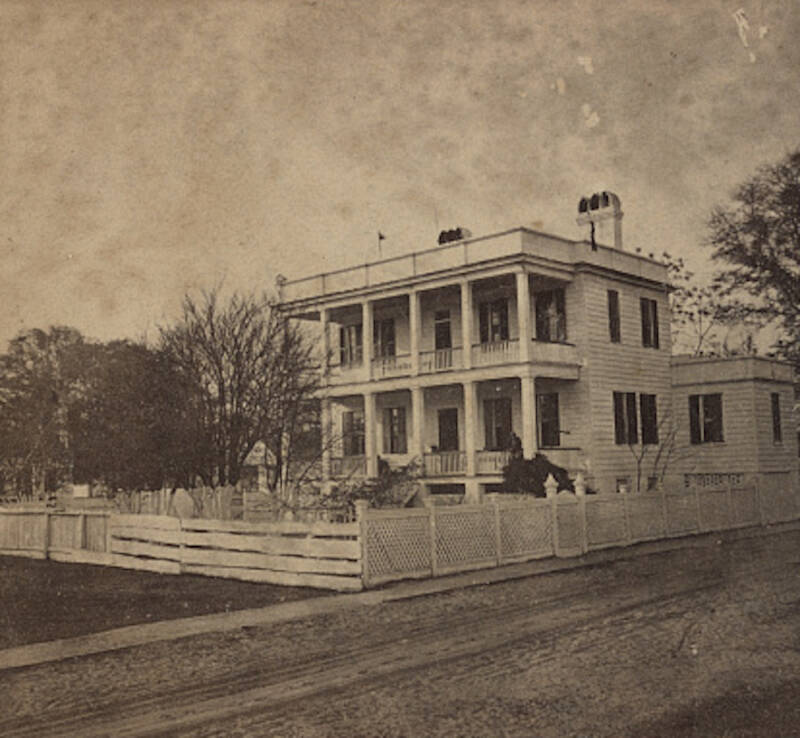 The treacherous trick worked. Several Volunteers were injured or killed before the regiment returned to South Carolina.

“It seems strange how our aversion to seeing suffering is overcome in war… how we hurry to assist in alleviating their pain, bind up their wounds, and press the cool water to their parched lips, with feelings only of sympathy and pity.”

Taylor even met Red Cross founder Clara Barton during this period while on a hospital visit in Beaufort’s Camp Shaw. 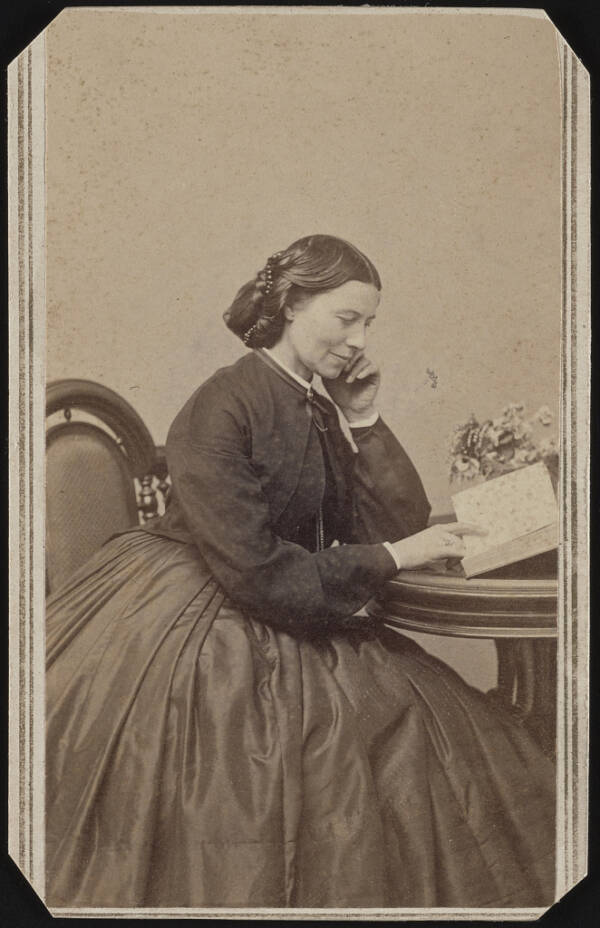 Taylor’s wartime experience grew more tumultuous in 1864 as the war dragged toward its bloody end. Violent clashes at Fort Wagner echoed in her mind as the Volunteers led a charge against Fort Gregg on Morris Island, which yielded losses too graphic for Taylor to forget.

“Outside of the fort were many skulls lying about… They were a gruesome sight, those fleshless heads and grinning jaws, but by this time I had become accustomed to worse things and did not feel as I might have earlier in my camp life.”

Before the war’s end in 1865, Taylor nearly died aboard a capsizing ship, evaded “bushwhackers” who shot at Union soldiers from the trees, and saw her men extinguish fires in war-torn Charleston as white civilians spat at them. 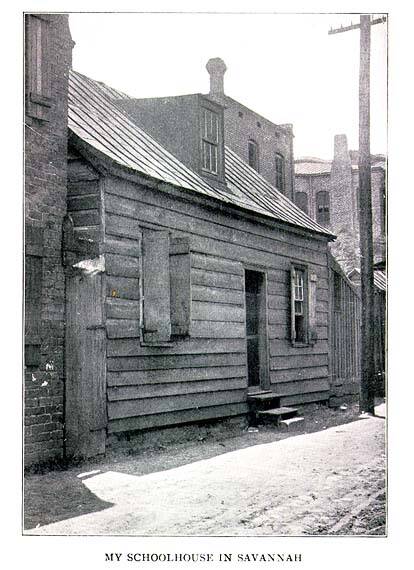 Nearly a year after the war ended, Trowbridge assured his troops that their “valor and heroism has won for your race a name which will live as long as the undying pages of history shall endure.”

But this was not entirely true. Even though the Civil War ended and ushered in the freedom of American slaves, racism had not been destroyed. Newly-freed Black Americans faced huge challenges in the period that followed, known as the Reconstruction Era, including the struggle to be seen as human.

“In this ‘land of the free’ we are burned, tortured, and denied a fair trial, murdered for any imaginary wrong conceived in the brain of the negro-hating white man,” Taylor wrote. “Each morning you can hear of some negro being lynched.”

Taylor faced numerous challenges in the post-war years herself. Her husband, a skilled carpenter, struggled to find a job. He eventually accepted work as a longshoreman but died during a docking accident in 1866. Taylor, now a single mother, wanted to keep teaching. But she could find no opportunities to do so. 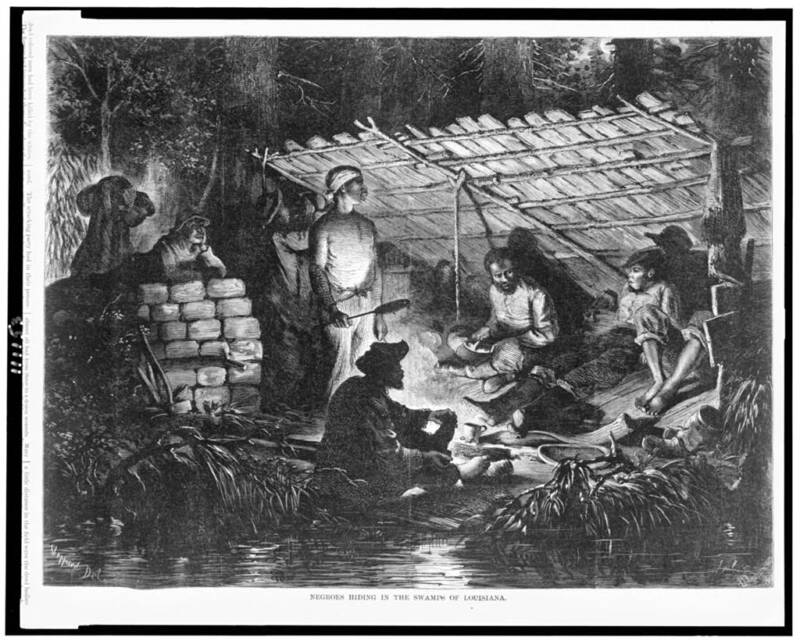 Library of CongressFree Black men during the Reconstruction period hide in the swamps from unjust law enforcement.

She briefly opened her own school, but competition forced her to close it and find employment as a domestic worker. However, Taylor’s activism never ceased. She organized Corps 67 of the Women’s Relief Core, which supported the Grand Army of the Republic, a support group for Union Army veterans.

This work took Taylor to Boston, Massachusetts where she found a thriving community that accepted her. Her memoir, written after a 1902 trip to Louisiana to care for her dying son, was published that year.

Susie Taylor King died ten years later in 1912. She remains a symbol of courage and caring even in the face of malevolence, and is one of the unspoken heroes of the American Civil War.

After learning about Susie King Taylor and her life as the first Black Army nurse in American history, read about seven horrible acts committed by America’s Founding Fathers. Then, learn about abolitionist John Brown, a white man killed for staging a violent uprising of slaves.