Travis Gienger hauled the nearly two-and-a-half-ton gourd on a custom-made trailer from Minnesota to California for the competition. 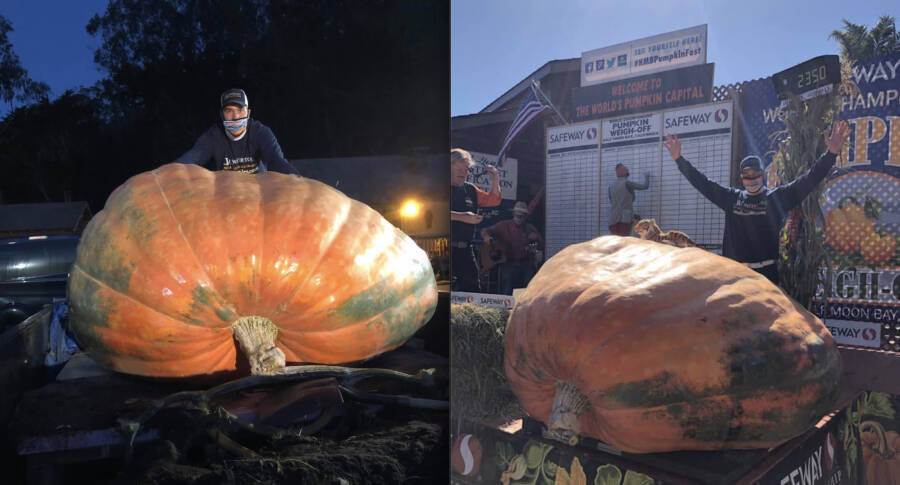 FacebookGienger had to build a custom palette for his truck in order to properly transport the gargantuan pumpkin.

Every year, the supermarket chain Safeway holds a World Championship Pumpkin Weigh-Off in California, and the winner of this year’s 47th annual contest was a 2,350-pound pumpkin named “Tiger King.”

Travis Gienger of Minnesota stunned judges and onlookers alike with his prized contender, which he named after the Netflix series of the same title, Tiger King. According to CNN, Gienger won $16,450 for his gargantuan gourd.

The competition is held in the town of Half Moon Bay and uses a “pay-by-the-pound” system, where champions earn $7 for every pound. The curious regional contest congratulated Gienger on Facebook and dubbed him the 2020 Pumpkin King of Half Moon Bay. 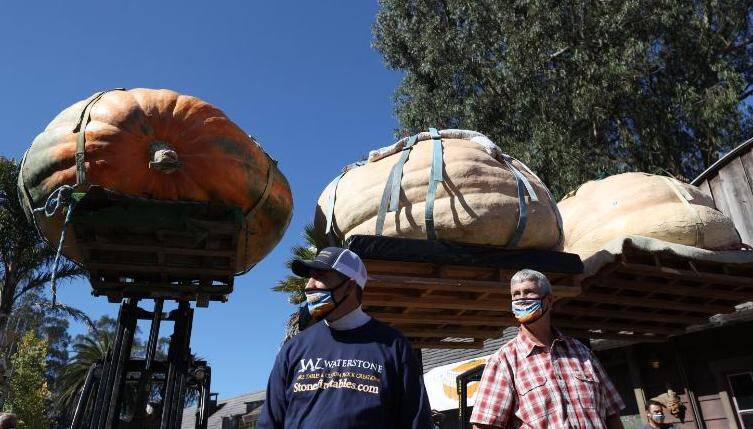 On top of that, the colossal fruit even broke an official 2020 record — as the heaviest grown pumpkin weighed in North America. As for the name, well, it grew just as organically.

“It was kind of funny deciding the name for this little, little pumpkin at the time,” he said. “I noticed that it might be orange with white stripes and my brother goes, ‘Oh it’s 2020. We should name him Tiger King.’ And I thought that’s great!”

Tiger King: Murder, Mayhem and Madness took the quarantined world by storm this year as millions watched the show’s controversial lead, Joe Exotic, and his seedy dealings as the owner of an exotic animal zoo in Oklahoma. 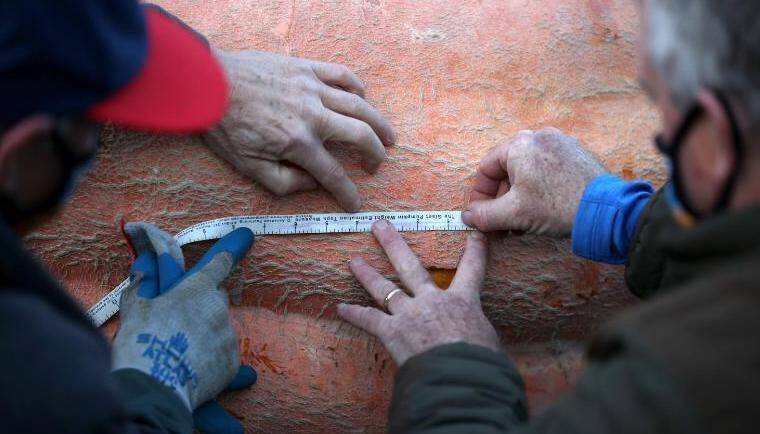 Getty ImagesJudges measure one of the pumpkins.

Most of us will engage with pumpkins this season by carving them into Jack-O-Lanterns or sipping on pumpkin-infused coffee drinks, but Gienger and his peers had to partake in more extreme activities. Transporting the enormous gourd to Half Moon, itself, was quite the challenge and required a careful 35-hour drive.

According to Patch, it took 10 people and a forklift to load the colossal gourd onto Gienger’s trailer. He not only built a custom palette for it but wrapped the pumpkin in pool noodles and blankets in order to protect it. He then covered the palette with dirt and stopped periodically while on the road to water the gourd in order to prevent it from shrinking or losing weight.

“People were wondering what we were hauling when we stopped at the gas station and we had to throw buckets of water on it,” said Gienger. “It was kind of funny.”

Gienger explained that pumpkins like his grow at a staggering two to three pounds per hour when treated properly. To think it all started with an $80 seed that came from a 1,501-pound pumpkin is certainly remarkable. Gienger said his gourd “Tiger King” grew to 1,000 pounds in just 20 days.

Travis Gienger takes the stage to be crowned 2020 Pumpkin King of Half Moon Bay.

“There was about 180 days of suspense there, wondering, ‘what will this thing weigh?'” Gienger said. “We could have weighed it [in Minnesota] but I just think that wrecks the fun.”

Ultimately, the pumpkin measured 19.5 feet in diameter and stood three feet tall. Gienger certainly has experience in growing pumpkins, starting at 15 and managing to grow a 447-pounder in the mid-1990s. Entering a nearly half-century-old competition, however, was entirely new to him.

Other gargantuan gourds have made the news this time of year in the past. In late October of 2019, a Tennessee farmer managed to grow a 910-pound pumpkin that he then hallowed out and transformed into a canoe. 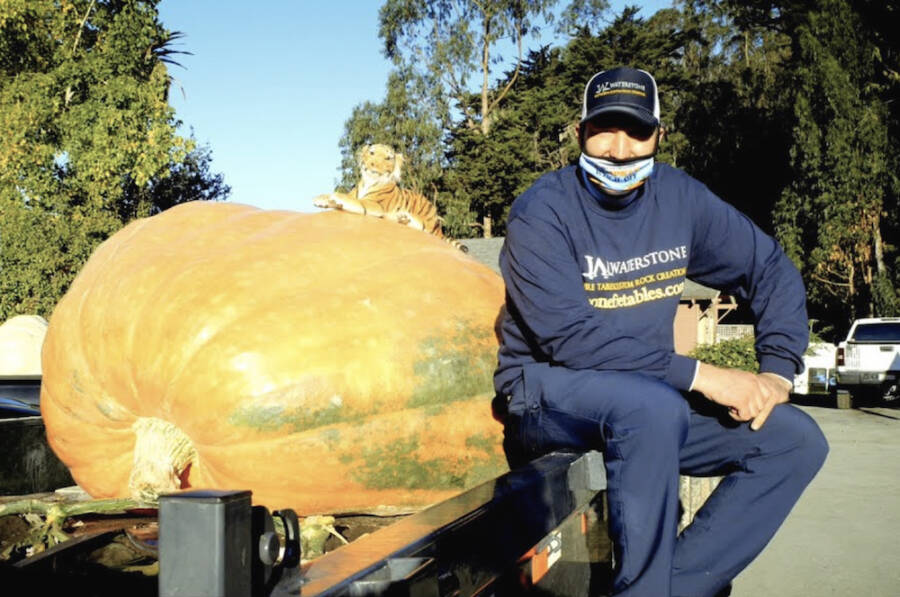 FacebookTravis Gienger said watching people stare at his pumpkin at gas stations was the best part of his trip to the contest.

Meanwhile, as fulfilling and lucrative as Gienger’s feat was, the Minnesotan also had the opportunity to walk home with an additional $30,000 — if his pumpkin was able to beat the world record of 2,624 pounds, which was set in Germany in 2016.

The Safeway sponsored pumpkin-weighing event began in 1974 and is annually held on Columbus Day. Growers from around the country flock to Half Moon Bay to test their mettle and hope to score. For Gienger, seeing his hard work pay off was “quite a joy.”

“I just want to say thanks to Half Moon Bay and all the people around the country and even overseas for all their support,” said Gienger. “It’s just been amazing how many people have reached out.”

After learning about the 2,350-pound pumpkin that won the “Super Bowl of Pumpkins,” check out these incredibly carved Jack-O-Lanterns. Then, learn more about the man who inspired Gienger, Joe Exotic.