"He chose a spot where the water ran off easily, keeping it cool in the heat of the day, keeping it watered and making sure that squash beetles didn’t overtake it." 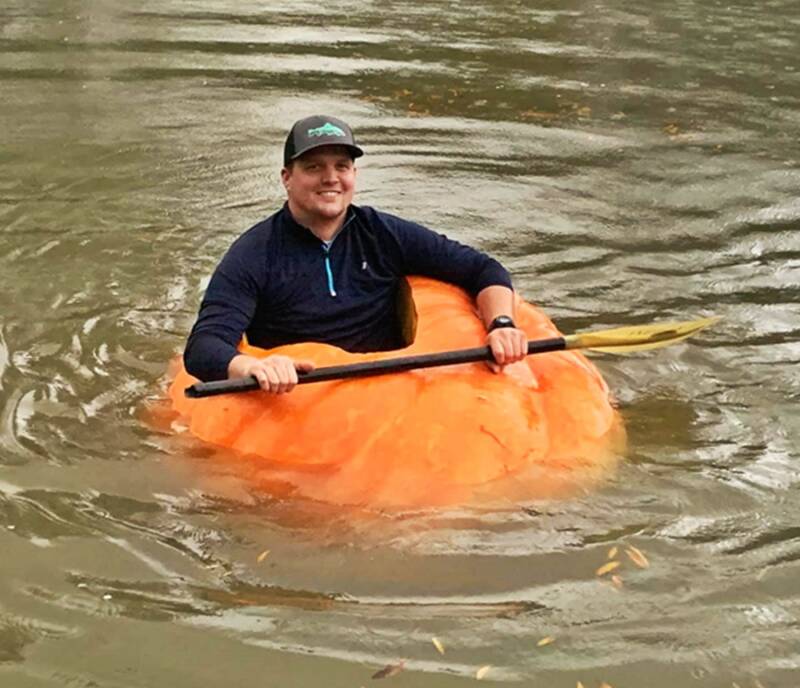 Christin Ownby/FacebookJustin Ownby used a seed from another record-breaking pumpkin that had also been grown in Tennessee.

Dreams come in many forms. For Justin Ownby, his dream was to grow a giant pumpkin. Recently, his wildest dream finally came true.

According to the local Chattanooga station WTVC, the farmer from Cleveland, Tennessee spent the last four years pursuing his dream of growing a monster pumpkin.

Like any other ambitious goal, growing an enormous pumpkin requires a lot of work — and, in Ownby’s case, a special pumpkin seed. He was able to get his hands on a seed that came from a record-breaking pumpkin grown in the state. At a whopping 1,700 pounds, that pumpkin won last year’s title for biggest pumpkin in Tennessee.

But this year, it was Ownby’s turn to shine. Armed with his special seed, the farmer immediately got to work. He planted the seed in May and took gentle care of it, almost like a father raising his son.

“He chose a spot where the water ran off easily, keeping it cool in the heat of the day, keeping it watered and making sure that squash beetles didn’t overtake it,” his wife, Christin, told WTVC. She added that instead of growing several pumpkins as they would normally do, this year all of her husband’s energy was concentrated on the giant gourd growing on their farm.

All that hard work did pay off in the end when the Ownbys were left with a massive 910-pounder. Weighing almost half a ton, it’s certainly the biggest pumpkin the family has ever produced.

“It’s the biggest we ever grew,” Christin told CNN. “The largest before was 220 pounds.”

Her husband Justin was so ecstatic of their success that he decided to take the family’s celebrations a step further. He harvested its seeds and then crafted its hollow soft shell into a floating device. Towing his giant pumpkin with him, the farmer took his kids to the nearby pond on their property to test it out.

Pushing the giant pumpkin out onto the water with an oar in his hand, the farmer climbed inside the makeshift boat and began paddling his way around the pond. The hilarious moment was captured by Christin, who published videos of Ownby’s pumpkin boat on Facebook.

At one point, Justin tries standing up inside the fragile vessel, struggling to keep his balance. As his family and friends shout encouragingly from the sidelines, he assumes a faux-stoic position after someone off-camera instructed him to reenact “Washington crossing the Delaware!” But the little bit of motion was too much and the floating pumpkin finally tipped over into the water, bringing the overzealous farmer with it.

In case you were wondering what we did with that giant pumpkin…. The second video is a must watch!

Unfortunately, the family fun was the only glory Ownby got for his giant pumpkin. The family was unable to submit their 910-pound pumpkin at the local fair because they had booked a trip during the time of the event. But there’s always next time.

“He is hoping to break the 1,000-pound mark next year,” Christin said. 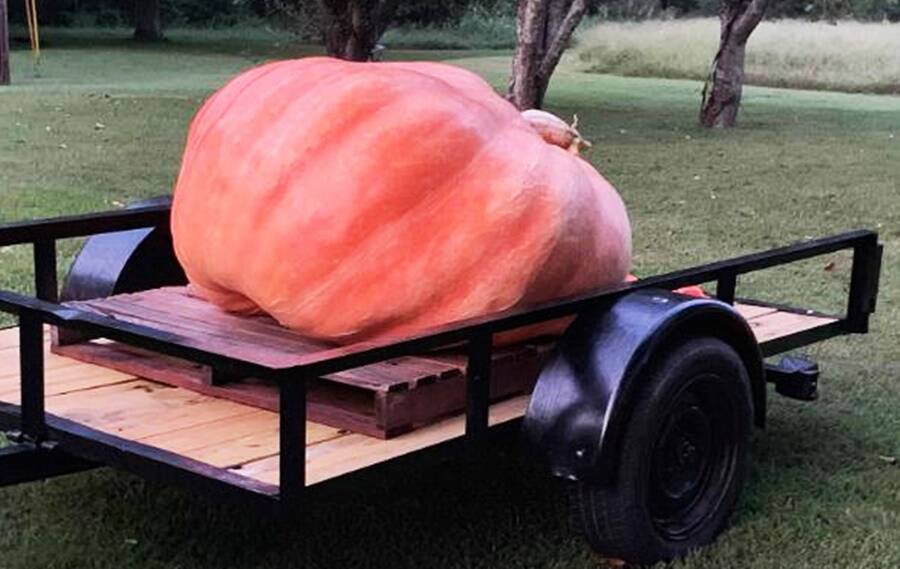 Pumpkins have become a staple in fall season celebrations, appearing in our seasonal drinks and creating one-of-a-kind competitions.

And Ownby’s giant pumpkin is indeed impressive. But compared to the heavyweights competing in this year’s New England Giant Pumpkin Weigh-Off at the Topsfield Fair in Massachusetts, Ownby’s giant gourd is practically puny. In fact, Connecticut resident Alex Noel set a new record for the heaviest pumpkin at the competition with his 2,294-pound pumpkin.

“It’s a dream come true. I’ll sleep better tonight than I have in 18 years,” Noel said of his victory. His restful night might have more to do with the $8,000 prize than his pride.

Now that you’ve witnessed a farmer turn his beloved 910-pound pumpkin into a boat, check out this incredible pumpkin art. Next, learn the surprising origins of Jack-O’-Lanterns.