Fossils uncovered at the Tanis dig site in North Dakota appear to contain evidence from the aftermath of the asteroid strike, even though the impact was almost 2,000 miles away. 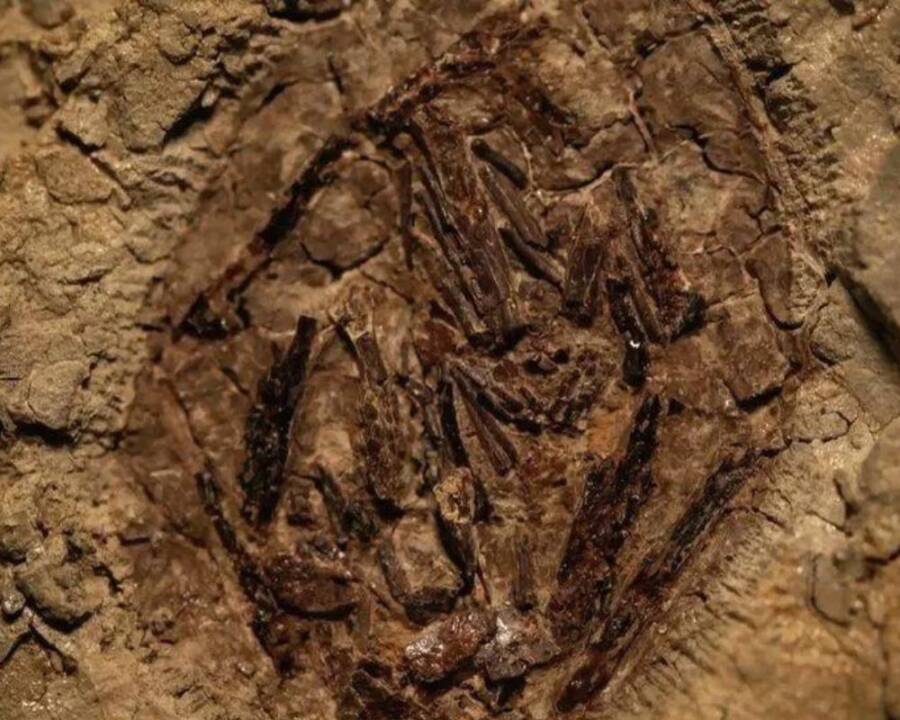 BBCPaleontologists uncovered a pterosaur embryo within an egg at the dig site.

Some 66 million years ago, a devastating asteroid struck Earth, obliterating the dinosaurs and heralding the rise of mammals. Now, paleontologists working in North Dakota believe that they’ve found a number of unlucky creatures who died on that fateful day. Their findings will be presented in full in a BBC documentary, Dinosaurs: The Final Day.

At the Tanis dig site in North Dakota, University of Manchester graduate student Robert DePalma led a team that uncovered a number of ancient animals that appear to have perished in the hours following the strike. They found a preserved pterosaur egg, fish with debris in their gills, and, remarkably, the leg of a dinosaur called the Thescelosaurus.

“The time resolution we can achieve at this site is beyond our wildest dreams,” Phillip Manning, a professor of natural history at the University of Manchester, and DePalma’s Ph.D. supervisor, told BBC Radio 4, as reported by The Guardian.

“This really should not exist and it’s absolutely gobsmackingly beautiful. I never dreamt in all my career that I would get to look at something a) so time-constrained; and b) so beautiful, and also tells such a wonderful story.”

“This looks like an animal whose leg has simply been ripped off really quickly,” he told the BBC. “There’s no evidence on the leg of disease, there are no obvious pathologies, there’s no trace of the leg being scavenged, such as bite marks or bits of it that are missing.”

Barrett added, “This could be the first bit of dinosaur ever found that died as a direct result of being involved in the cataclysm after the meteor hit.”

DePalma told the New York Times that while it’s possible the dinosaur perished another way, it certainly seems likely that the asteroid did it in. “This is like a dinosaur C.S.I.,” he said. “Now, as a scientist, I’m not going to say, ‘Yes, 100 percent, we do have an animal that died in the impact surge.’ [But] is it compatible? Yes.” 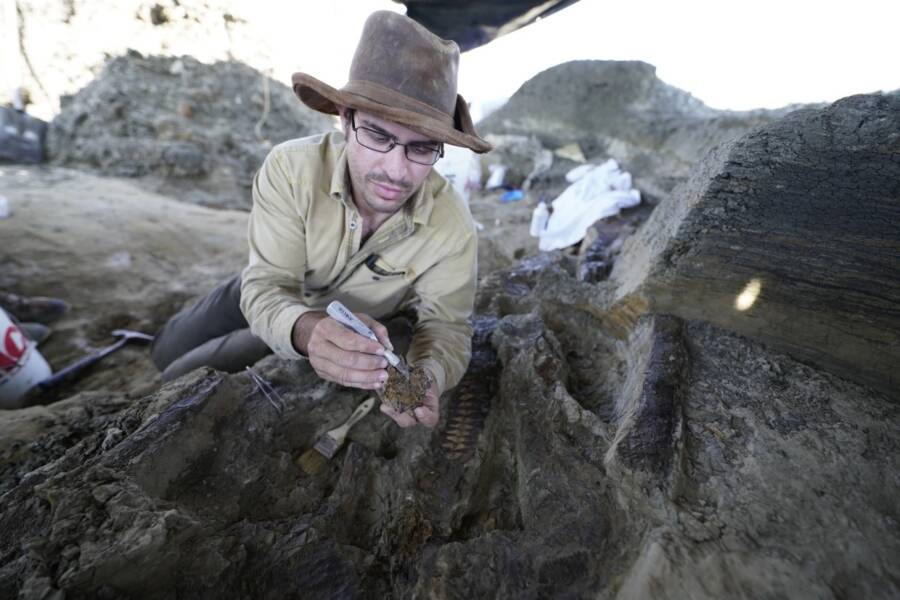 When an asteroid — or possibly a comet — hit Earth some 66 million years ago, it struck the planet off the Yucatán Peninsula in present-day Mexico. Though the Tanis site is almost 2,000 miles away, living creatures there felt the aftershocks.

The impact itself, which The New Yorker described as “a billion Hiroshima bombs” in a 2019 piece about the Tanis dig site, unleashed shards of molten material into the atmosphere. As this material cooled, it fell back to the Earth.

Significantly, DePalma and his team found evidence of these tiny glass “spherules” in the gills of fossilized sturgeon and paddlefish. The fish suffocated to death — but left compelling evidence of the asteroid strike.

“We were able to pull apart the chemistry and identify the composition of that material,” Manning explained to the BBC. “All the evidence, all of the chemical data, from that study suggests strongly that we’re looking at a piece of the impactor; of the asteroid that ended it for the dinosaurs.”

However, not everyone is entirely convinced that the fossils found at the Tanis dig site belong to creatures killed by the asteroid strike. Steve Brusatte, a paleontologist at the University of Edinburgh who was consulted on the BBC documentary, has his doubts.

“I haven’t yet seen slam-dunk evidence,” he told the New York Times. “It’s a credible story but hasn’t yet been proven beyond a reasonable doubt in the peer-reviewed literature.”

To the BBC, Brusatte added: “Those fish with the spherules in their gills, they’re an absolute calling card for the asteroid. But for some of the other claims — I’d say they have a lot circumstantial evidence that hasn’t yet been presented to the jury.”

That said, he acknowledged that preserved pterosaur egg uncovered by DePalma’s team was a “super-rare” find, whether or not it was impacted by the asteroid 66 million years ago.

Barrett similarly acknowledged that it’s possible that the dinosaur didn’t die in the asteroid strike.

“While it is plausible that this Thescelosaurus was killed on the day of the strike, it’s also possible it was exhumed by the asteroid impact, and then mixed together with everything else in the aftermath,” he explained.

He added: “But the fact that it is so well-preserved suggests to me that even if the animal didn’t die as a result of the events that caused the deposit, it must have died very close in time to it.”

As always, peering at the past through the periscope of time can make it difficult to determine what actually happened. But these fossils could represent a truly “striking” moment — when an asteroid hit the Earth, and irrevocably changed the course of the planet’s history.

After reading about the dinosaurs who may have died during the asteroid strike, discover some of the weirdest dinosaurs that ever existed. Or, look through these fascinating dinosaur facts and images.