What Are Tardigrades? Meet The Most Resilient Animals On Earth

The segmented invertebrates known as tardigrades may be microscopic, but these indestructible "water bears" are planet Earth's most resilient creatures.

No creature on Earth, or perhaps in the universe, has been through as much as the tardigrade and lived to tell the tale. Measuring just over one millimeter, the tardigrade a.k.a. water bear is by no means a large animal. In fact, you’ve probably never seen one.

But don’t let its minuscule stature fool you. The tardigrade may be tiny, but it’s probably tougher than you are.

What Are Tardigrades, The Little Water Bears That Can Survive Anything? 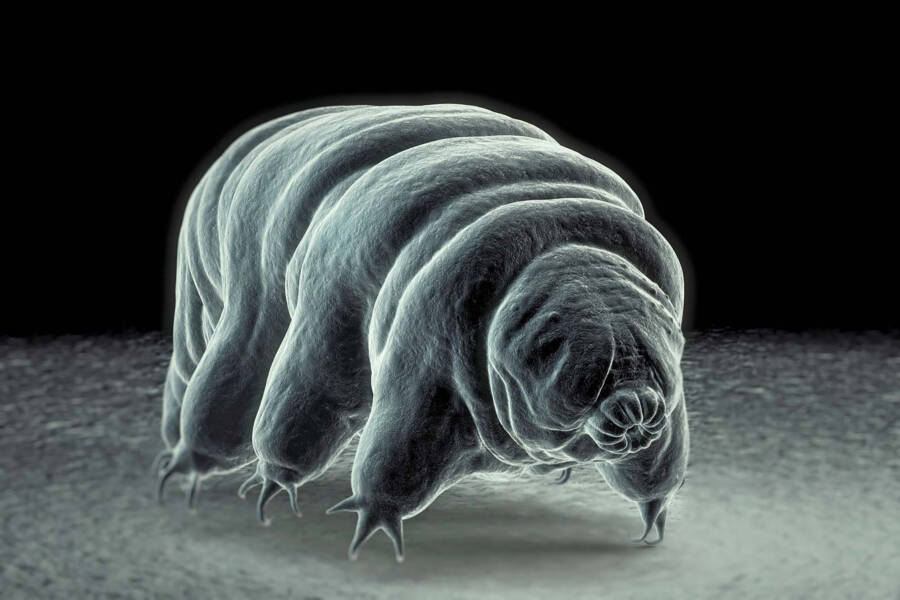 University of FloridaAlso known as water bears, tardigrades are so indestructible that they can even survive in the depths of outer space.

From the bottom of the ocean to the canopies of the rainforest, and from the tundras of Antarctica to the surface of a volcano, the tardigrade has been there and done that. And, most surprisingly, lived through it to baffle scientists worldwide. Water bears have even been sent into the vacuum of space, where no man has gone before, and come back perfectly fine.

They’ve also been around forever. Though they were first discovered in 1773 by German zoologist Johann August Ephraim Goeze, fossils of tardigrades have been found and dated back 530 million years. Today, we know of at least 700 different species of water bear living in a wide range of habitats.

Goeze named his discovery kleiner Wasserbär, meaning “little water bear,” a moniker that has stuck around. The nickname came from the tardigrade’s gait, which resembles that of a bear. Tardigrades have also been referred to as “moss piglets” (a name derived from their rotund bodies and penchant for hanging out in moss and lichen). 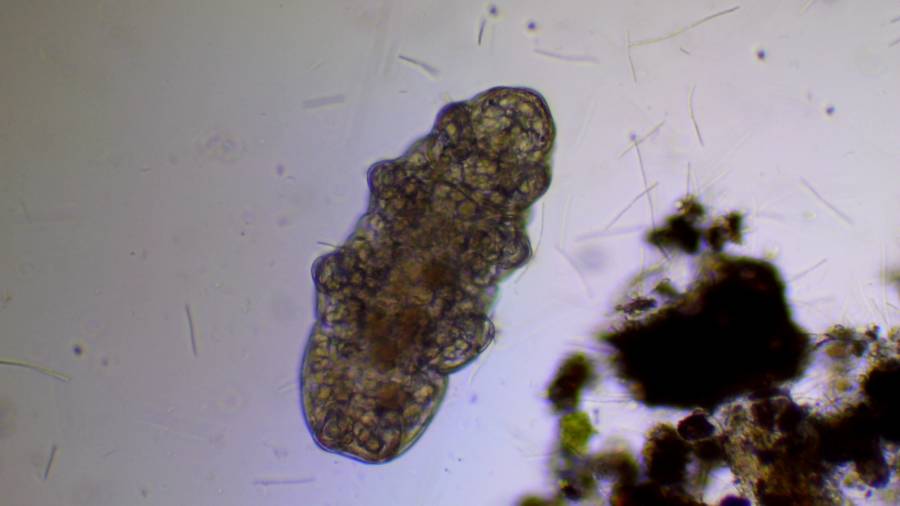 Dmitry Brant/Wikimedia CommonsTardigrades are widely believed to be the most resilient animals on Earth.

The animal’s scientific name tardigradum means “slow walker,” and if you watch videos of the little creatures, it’s almost impossible not to see the similarities between a tardigrade and a slow-moving bear.

While their gait may resemble a bear’s, the similarities end there. Water bears are short and plump, with eight short, stubby legs. Each jointless leg ends in four to eight claws, which help the tardigrade cling to surfaces.

They have a small, flat face, with an extendable mouth that bobs in and out as it moves through its surroundings. Some species even have little eyes, perceptible in a microscope, that give them still more character. They are also typically transparent, which means you can often spot the algae and moss water bears have consumed floating somewhere in the region of their midsection.

Despite their strange appearance, one can’t help but think of a tardigrade as bizarrely adorable.

A tardigrade comes back to life.

The tardigrade has been a favorite of scientists and students for years due to its seemingly indestructible body. In addition to being able to survive water, fire, and space, the little animal has been known to survive radiation, dehydration, starvation, air deprivation, and extreme pressures and temperatures (both high and low).

When it is dried out, the tardigrade goes into a conservation mode, rolling in on itself and turning into what scientists call a “tun.” In this state, it produces glycerol (also known as antifreeze), which helps it survive. As a tun, water bears also reduce their own metabolism by about 99.99 percent so that food becomes unnecessary. In this state, they could theoretically survive for 100 years.

Tardigrades in tun form have been blown about the world, carried on the wind to new climes, where a little water rehydrates them and brings them to life again. They survive arctic winters in just this fashion — freeze-dried tuns hunker down for most of the year and revive in the summer. 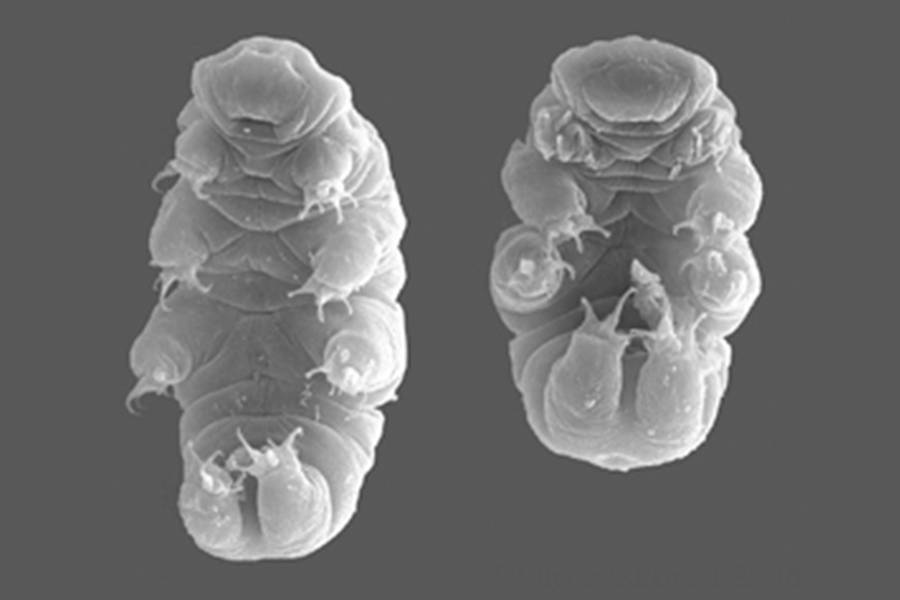 Wikimedia CommonsA tardigrade under a microscope.

For centuries, the tardigrade has baffled scientists and continues to do so. In 2016, scientists successfully revived a water bear that had been frozen for over three decades, opening up new theories on the animal’s survival in relation to extreme temperatures.

So, what does an indestructible animal eat when it’s not in hibernation mode? For the most part, plants. The tardigrade survives mostly on moss and algae, consuming plant substances for sustenance. Some species eat bacteria, and a few rare species are carnivorous. But you’re not in danger — they prey on smaller species of water bear. That is, of course, when they eat at all.

The Secret To Finding A Water Bear Of Your Own 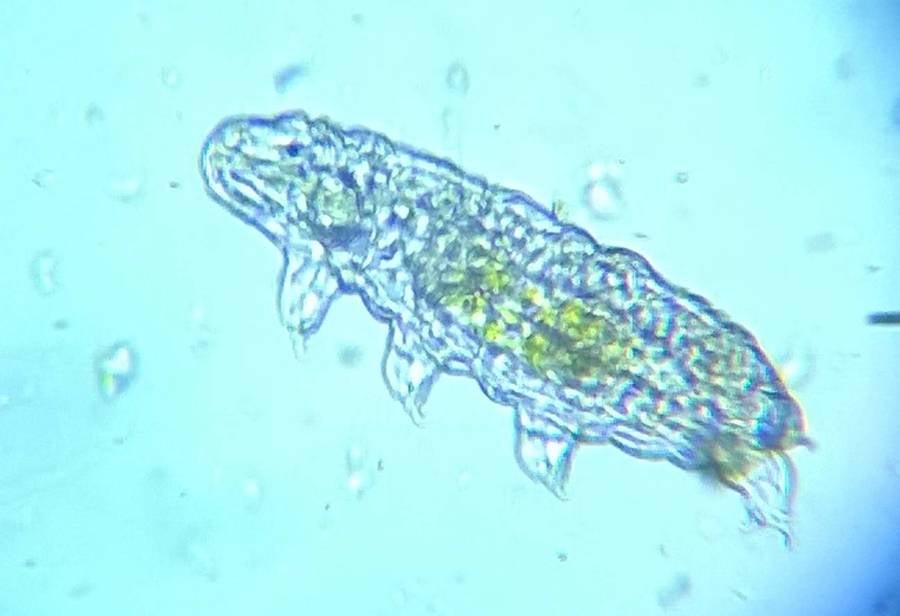 Peter von Bagh/FlickrMost species of tardigrade, a.k.a. water bear, are transparent, meaning it’s not hard to see this animal’s lunch inside of it.

Want to see a water bear for yourself? Surprisingly, it’s not as hard as you might think. For all their excellent survival skills in dramatic climates, tardigrades are also happy to hang out in places humans find habitable. Though they can endure extreme temperatures, the wrong environments will eventually kill them (after a very long time). They prefer a sweet spot not that different from the climates humans like.

First, find and carefully remove a small chunk of moss or lichen (the bases of trees and the sides of old wood are great places to check). Next, soak your harvest in water for a few hours. For your best chance at spotting a tardigrade, leave the moss in water overnight.

Why? Your new water bear is probably a little dehydrated, which means it’s likely to be hanging out in its tun state. A tun is a lot harder to spot than an active tardigrade.

When you’re ready to start your hunt, spill a few drops of water onto a slide (yes, water, not moss—if all went according to plan, the tardigrades should have abandoned ship and will be happily paddling around). Put your slide cover on and use a low-powered microscope (or even a strong magnifying glass) to search for movement.

If you don’t see any at first, don’t panic — just spill a few new drops of water onto your slide and check again. Before long, you should see the little water bears motoring along, tiny legs working double-time in their search for food.

So there you have it, the most amazing creature on earth. Indestructible enough for open space travel and hearty enough to survive decades in hibernation, the tardigrade might just outlive us all.

After learning about water bears, check out the world’s most dangerous animals. Then, read up on this mystery sea creature that washed up on shore in Indonesia.