Though officials know that the girls likely met on social media, police have no leads on their motives in this grisly slaying. 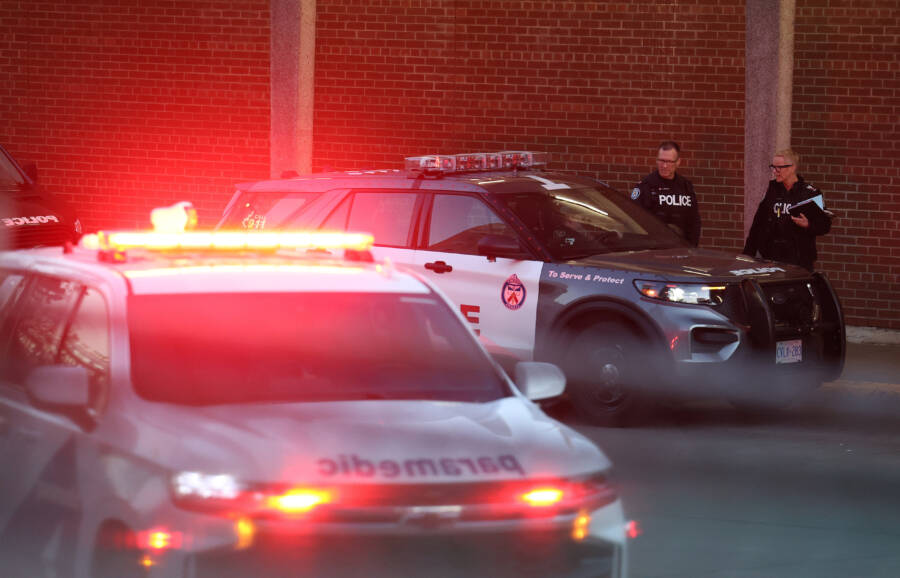 Steve Russell/Toronto Star via Getty ImagesPolice said the victim had been in Toronto’s shelter system since September.

Per CBC, police are not categorizing the girls as a gang, but rather investigators have called the incident a “swarming,” which Detective Sergeant Terry Browne said typically involves victimizing a specifically chosen target.

Their identities are not being released per the Youth Criminal Justice Act. The name of the victim has likewise not been released, as police are still working to notify his next of kin.

“I’ve been in policing for almost 35 years, and you think you’ve seen it all,” Browne told The Associated Press.

“Anyone who isn’t shocked with hearing something like this has clearly just thrown in the towel and just said that anything is possible in this world,” Browne added. “Eight young girls and most under the age of 16. If this isn’t alarming and shocking to everyone, then we’re all in trouble, quite frankly.”

The man had been talking with another person on the street when the group approached, but police are unsure why, exactly, they had done so or why the situation escalated.

In all, Browne said, the whole thing took about three minutes. The man was rushed to hospital with life-threatening injuries and died a short time later.

Browne also said that the girls had been involved in an altercation earlier that evening in the same area, but did not offer any further details.

“They met each other through social media. They come from varying parts of the city,” Browne said. “We don’t know how or why they met on that evening and why the destination was downtown Toronto. We don’t know how long they were acquainted with each other.”

“Maybe these were eight young women that wanted to make a name for themselves and see if they could become socially famous,” he added. 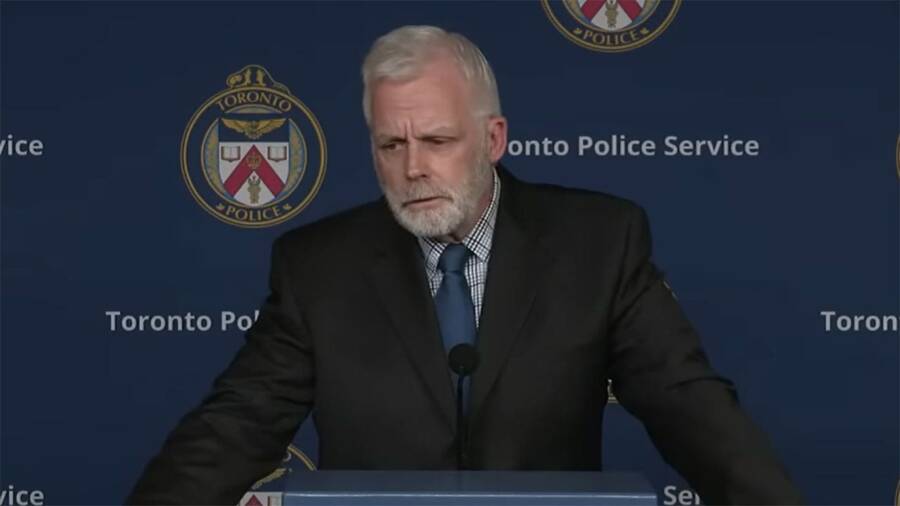 TwitterDetective Sergeant Terry Browne of the Toronto police’s homicide unit during a press conference regarding the incident.

Police seized a number of various weapons as well, but they have not said what sorts of weapons they were. They did say, however, that they believe the girls coordinated the attack.

“They are all equally culpable,” Brown said. “There is no doubt in our minds that they were all working as a singular entity in a swarming mob mentality when they chose to attack this man… It’s bizarre that they would all have hooked up together and found their way to downtown Toronto. Their primary residences are all over the place.”

The girls have made their first appearance in court and remain in police custody, with a second court appearance scheduled for December 29.

As for the victim, Browne said that the man had been living in Toronto’s shelter system since September, but police have so far been unable to reach his family.

“He does have a very supportive family in the area, so I wouldn’t necessarily call him homeless. Maybe just recently on some hard luck,” Browne said.

Another resident of the shelter, the Strathcona Hotel, told CBC that she had been outside with the victim when the girls approached. She’d had a bottle of alcohol with her and said the girls tried to take it; the victim told the girls to leave the woman alone.

“He protected me,” the woman said, after which the girls allegedly punched the man repeatedly. The woman said walked away, frightened, and one of the girls tried to follow her.

Browne said similar incidents occurred more frequently 20 or 30 years ago, when swarms of teenage boys attacked victims trying to steal pairs of Dr. Martens or Air Jordans, but these sorts of attacks had faded away in the years since.

“Has this happened recently that we are not aware of? Have people been posting this stuff online that we weren’t aware of?” he said. “It’s something that we are going to try to find out.”

“Everyone in our city deserves to be treated with dignity and respect. I am so saddened to know that a man has lost his life in this way,” said Toronto Mayor John Tory in a statement on the night of Dec. 20. “I am extremely troubled by the young age of those accused and by the number of people allegedly involved in this murder. My thoughts are with this man’s friends and all those who knew him as they mourn his loss.”

While incidents such as this are rare, this is far from the first time young teens have been involved in horrific crimes. Learn about the Slender Man stabbing, when two teen girls attempted to murder their friend as a sacrifice to the Creepypasta figure. Then, read about the teenage killer Cheyenne Rose Antoine, who was caught because of a selfie she took with the murder weapon.