Terrible Ted made the rounds in WWA fighting, taking on some of the most famous names in wrestling, and almost always coming out on top.

On April 1, 1950, wrestler Terrible Ted debuted in Asbury Park, New Jersey. He defeated renowned fighter Tony Galento, after which he fought him again in a rematch. Despite being a newcomer to the wrestling scene, Terrible Ted proved himself a worthy adversary of more famous heavyweights.

It may have had something to do with the fact that Terrible Ted was a bear.

A Canadian American black bear, to be specific. Born in 1949 (or early 1950 by some accounts), Terrible Ted was seemingly destined for a life of wrestling. As a cub, his teeth and his claws were extracted, making him relatively harmless to tussle with, as the risk of being mauled was greatly reduced. Though, as a 600-pound bear, he was still rather imposing.

His first, second, and third wrestling matches were against famed wrestler Tony Galento, which rocketed him to wrestling fame. After that, he was purchased by Dave McKigney, a wrestler who fought under the stage name Gene DuBois.

For the most part, McKigney dragged Terrible Ted around carnival shows and small town fairs to have him wrestle trained performers. Almost all of the shows had a predetermined outcome, as did many wrestling matches at the time, which resulted in Terrible Ted coming out on top in almost all occasions.

Occasionally, however, McKigney would challenge a brave member of the audience to wrestle Ted. Should they win, he promised, they would receive a large sum of money. Though many attempted to pin the bear, only one man, a welder named John Szigeti, was able to successfully do so.

Unfortunately, when it came time for him to claim his prize money, McKigney reneged on his promise. Instead of paying Szigeti the $3,000 he was promised, McKigney skipped town. When Szigeti sued for the $3,000, Ted was arrested and held in the county jail as security until McKigney appeared in court. 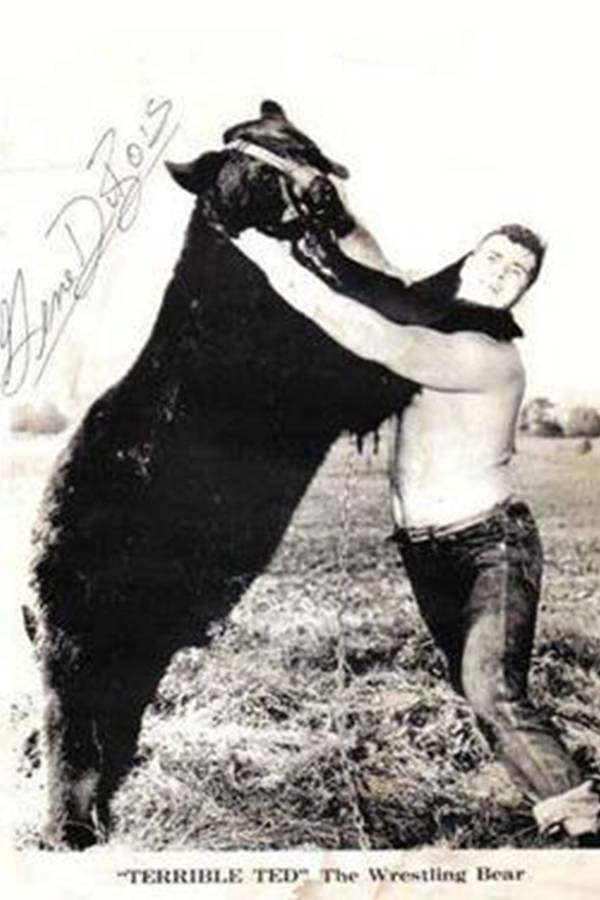 In 1973, he began wrestling professionally for the World Wrestling Association. While with the WWA, he faced his first female opponent, wrestler Tanya West, whom he beat twice – once in a six-person tag match. The WWA transported Ted all around the United States and Canada, arranging performances for him from San Francisco all the way to Halifax, Nova Scotia.

In 1974, he faced his final opponent, wrestler Sam Bass. After defeating him, Terrible Ted officially retired from professional wrestling and settled into a quiet life at home with his trainer, McKigney.

Along with Terrible Ted, McKigney also kept another bear as a pet, a black bear known as Smokey. Unlike Ted, Smokey still had all of his teeth and claws and was not as used to humans as Ted was.

In July of 1978, McKigney left Smokey’s cage door open when he went to answer the phone. Smokey managed to find his way out of his cage and into DuBois’ home, where he mauled McKigney’s girlfriend, Lynn Orser, to death. Smokey was immediately taken by the Ontario Humane Society, and though he wasn’t involved, they seized Terrible Ted as well.

Despite the fact that neither bear showed signs of rabies and the fact that bears often act unpredictably during mating season, the bears were never returned to McKigney, and to this day, their fates remain a mystery. The average lifespan of a black bear is between 10 and 30 years, and though he would have been 18 at the time of Smokey’s attack, it’s unlikely that he survived to be 68 years old.

Though for a bear that survived declawing, de-toothing, wrestling with world-famous WWA competitors, and a jail stint, perhaps an unusually long life doesn’t seem so out of the question.

After learning about Terrible Ted, the black bear who wrestled some of the 20th centuries most famed wrestlers, read about Timothy Treadwell, the man who spent 13 years living among grizzly bears, only to be killed by them. Then, read about Hugh Glass, an explorer and frontiersman who also had an unfortunate run-in with a bear.