The Sword Of Goujian Is 2,500 Years Old And Works Just Like New

Despite the damp conditions of the tomb it was found in, the Sword Of Goujian is still razor sharp after resting for 2,500 years.

In 1965, archaeologists working in China’s Hubei province made an amazing discovery. It was a tomb dating back more than 2,000 years. The find was so old that it reached back to an almost mythical time in Chinese history: the Spring and Autumn Period.

In the tomb in Hubei, archaeologists discovered a sword fit for one of these heroes. The sword rested inside a lacquer and wood sheath laid next to the skeleton of the tomb’s owner. The sheath was in remarkably good condition. Still, no one expected to pull anything out of it but rust.

The sword had, after all, been sitting in a damp tomb for almost 2,500 years. But as the sword was pulled free from its almost air-tight fit in the scabbard, the light still gleamed off of the metal. The surface of the blade had a golden hue crossed by intricate darker patterns. Incredibly, in more than two millennia it had hardly rusted at all.

What was even more amazing was that the blade was still razor sharp. The blade had somehow survived the damp conditions of the tomb to remain as ready for battle as it had been when it was laid into the grave during the Spring and Autumn Period. 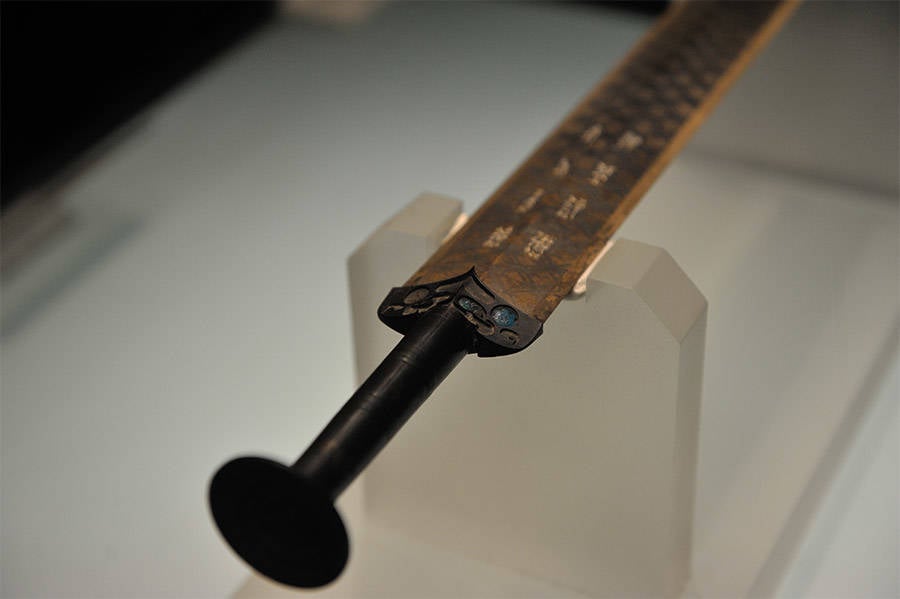 Immediately, the find raised a number of questions. Who was the man in the tomb to be able to afford such a magnificent sword? And how had Chinese blacksmiths living more than 2,000 years ago managed to create a masterpiece that could weather the centuries untarnished?

As far as the first of these questions went, the sword itself provided some important clues. A number of etchings were still visible in the metal. In an ancient Chinese script, they read, “[The] King of Yue made this sword for his personal use.” Of course, this raised its own questions.

Since the time the sword was made to the time it ended up in the tomb, there had been several Kings of Yue. Which was the inscription referring to?

By analyzing the blade and the tomb, most of the archaeologists reached an agreement that the most likely owner of the sword was King Goujian, who had led his kingdom to victory in one of the last major wars of the period.

But what about the sword itself? What made it so durable?

To answer that question, scientists working on the sword studied the composition of the metal. According to tests, the blade was made mainly of flexible copper. The edge, however, was mainly tin. This allowed the blade to keep a sharp edge for much longer.

The sword’s composition, as well as the air-tight fit with the scabbard, probably gave it a better chance at surviving than most other swords.

However, while the sword had withstood the test of time, it was about to come up against an even more dangerous enemy: human error.

In 1994, the Sword of Goujian was loaned for an expedition in Singapore. There, a workman drawing it from the scabbard accidentally banged it against a hard surface. The force opened up a small crack in the blade that remains to this day.

To avoid similar incidents, it is now against the law to remove the sword from the borders of China. The sword now rests in a Chinese museum, where it will continue its battle against time for at least a few more decades.

Enjoy this look at the Sword Of Goujian? Next, read about the mysteries of theUlfberht swords, the all-powerful viking swords. Then learn about the legend of the real sword in the stone and the person it actually belonged to.