Thieves In Paris Drill Through Catacombs To Steal $300,000 In Wine

This is some next-level wine thievery. 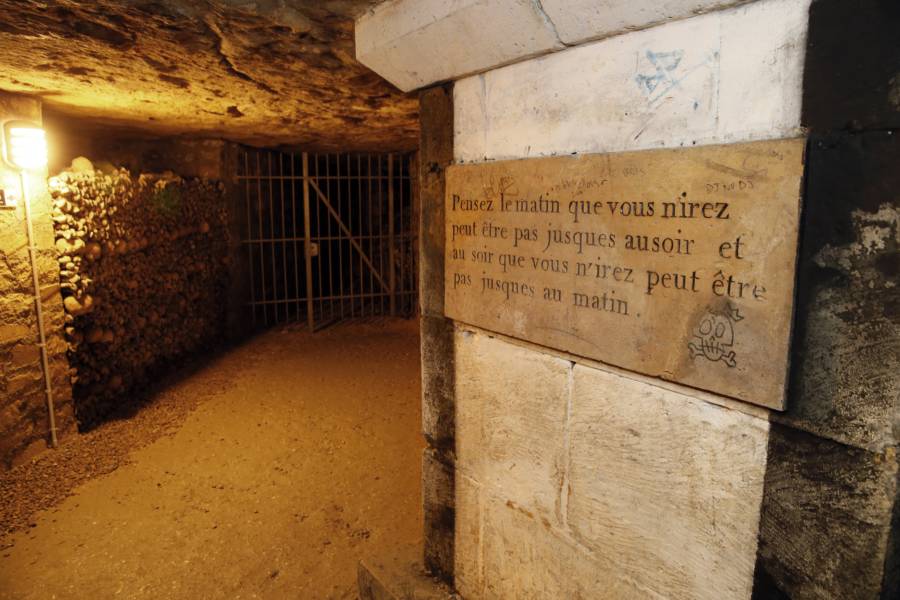 A picture shows the Catacombs of Paris on October 14, 2014. These underground quarries were used to store the remains of generations of Parisians in a bid to cope with the overcrowding of Paris’ cemeteries at the end of the 18th century, and are now a popular tourist attraction. AFP PHOTO / PATRICK KOVARIK (Photo credit should read PATRICK KOVARIK/AFP/Getty Images)

It’s a scene that seems ripped right from the Ocean’s Eleven trilogy. Burglars in Paris use a high-powered drill to bore through tough terrain to earn a big score. Except this one is all too real.

According to The Local, thieves descended into the city’s Catacombs on Monday night beneath the upscale sixth arrondissement. There, in the expansive series of underground tunnels housing scores of human remains, the thieves drilled a into the wine cellar of an adjacent home. They proceeded to make off with about 300 bottles of expensive grand cru wine collectively valued at about €250,000, or $298,000.

Police say the thieves almost certainly scouted their mark ahead of the heist, as they seemed to have a good idea of where to drill from the underground crypt. “We believe they must have made visits before,” said a police spokesman. “The suspects didn’t drill that particular wall by accident.”

There are some 150 miles of tunnels comprising the Catacombs, but only a little over a mile of those are able to be toured during the day and with a guide. The underground ossuary came into existence in the late 18th century, when Paris’ cemeteries were becoming massively overcrowded. Gradually, workers moved scores of remains from aboveground cemeteries to their new subterranean lair, which was formerly an underground quarry. It is estimated that the bones of some six million Parisians lie beneath the city.

During World War II, the Nazis even built a bunker in one.

Although some of the Catacombs’ tunnels are labeled with the corresponding streets above them, it is possible to lose one’s bearings, which is one reason why tourists are required to stay with their group guide at all times. In June of this year, two teenagers became lost for three days before finally being sniffed out by rescue dogs. They were fortunate to avoid the fate that befell Philibert Aspairt, a hospital worker who disappeared when he wandered down to the Catacombs in 1793. His body wasn’t found until 1804.

Urban explorers who enter the Catacombs illegally are known as Cataphiles. Some of been known to have parties down there, and in 2004 police even found a fully equipped movie theater.

The wine theft seems to be the first of its kind. Police say two other cellars were also drilled into, but nothing was taken.