Walrus sightings are a rarity in the British Isles, so the arrival naturally became a spectacle and gathered large crowds — many of whom witnessed the exhibitionist display. 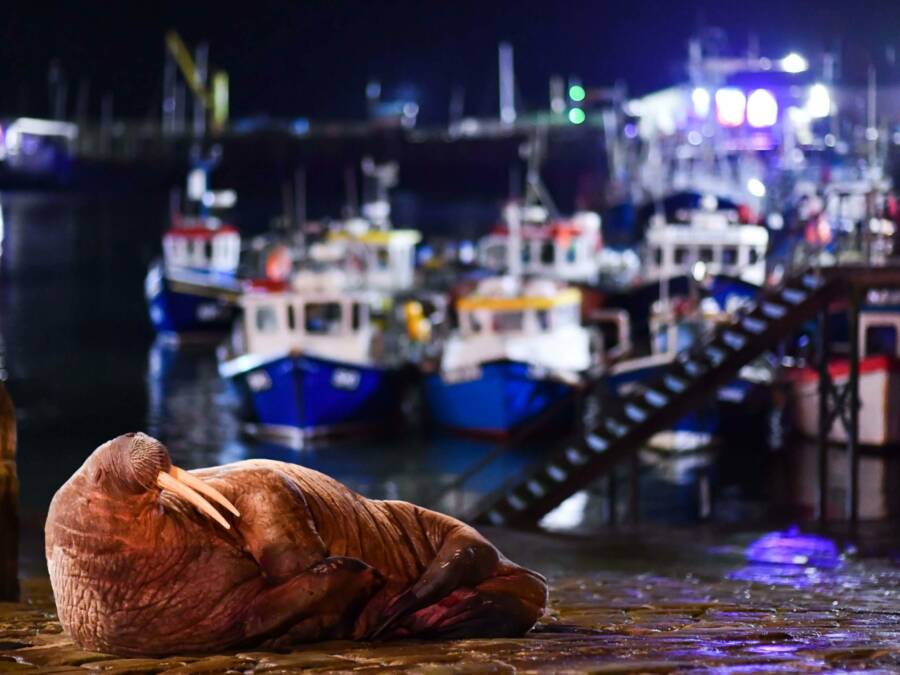 TwitterThor was spotted in Hampshire just a few weeks before his now infamous appearance in Scarborough.

When an Arctic walrus named Thor showed up in Scarborough’s harbor, it caused quite a stir — so much of one, in fact, that the town canceled its New Year’s fireworks display so as not to disturb the animal.

In response, Thor masturbated in front of a crowd and left town.

The video of Thor’s public display has been shared on Twitter and TikTok, accompanied by an assortment of hashtags and captions ranging from #WankingWalrus to “This is the energy we need in 2023.”

This is the energy we need in 2023. pic.twitter.com/5qRmTRkIiY

Per the BBC, the walrus’ arrival in Scarborough is thought to be the first sighting of a walrus in Yorkshire, and the spectacle drew large crowds. Wildlife experts also urged locals to leave the mammal be and suggested he may simply have been “taking a break” as he journeyed north.

Out of respect for Thor, at the behest of the British Divers Marine Life Rescue, Scarborough canceled its firework display, concerned that the explosions would cause the walrus “distress.”

Many locals reported seeing the walrus by the harbor before the viral video, as well. Stuart Ford, operator of the Sealife Safari boat tour agency, told the BBC, “I was going down to my boat and there it was on the slipway – magnificent. It’s got to be half a ton. I think it’s a once-in-a-lifetime, first-time-ever thing in Scarborough to see.” 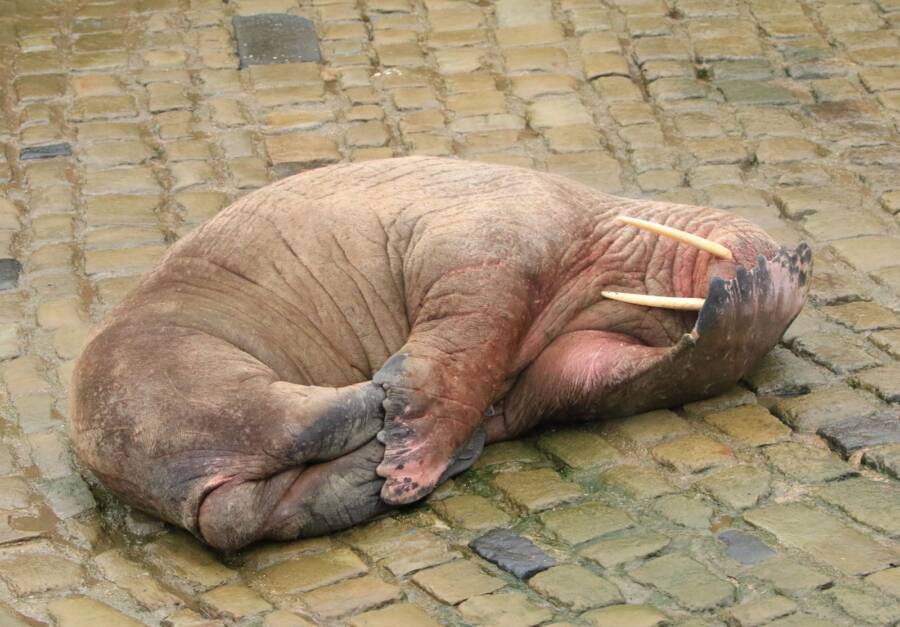 TwitterThor the walrus laying on the Scarborough harbor slipway.

“Please do not worry – he appears well and is just taking a well deserved rest after his long adventure!” the Sea Life Scarborough aquarium wrote on social media. The aquarium’s care team was monitoring Thor’s situation alongside the RSPCA and British Divers Marine Life Rescue.

“Please be respectful of his rest and try not to disturb him,” they continued. “While it is a very exciting opportunity for us, naturally they do not like lots of noise and are not familiar with domestic animals so please keep pets on leads and remain a safe distance for your own welfare and his.”

A small barrier was erected at the top of the slipway where Thor had set up a temporary residence, allowing locals to observe him from a safe distance and take in the spectacle.

“It is absolutely teeming with cars and people. It’s amazing how much attention it’s brought,” local Richard Coulson told the BBC. “It’s the first time I’ve ever seen one. It’s huge. We see seals quite regularly round Scarborough coastline but something of that size, it’s enormous. You respect nature when you see something of that size. Its tusks are bigger than my arms.”

Of course, it seems that the respect was not mutual, and Thor may have become a bit too comfortable — and the morning after his exhibitionist act, he was gone. In short: Thor showed up in Scarborough, got the fireworks display canceled, publicly pleasured himself, and then skipped town.

Luckily, based on comments made online, it seems as if most of the townspeople had a good laugh about the whole thing, and Thor is unlikely to face any public indecency lawsuits.

All things considered, the situation played out fairly well for the locals and for Thor — and a big reason for that is that people left him alone.

Elsewhere, however, walruses haven’t always been so fortunate. In fact, just last August, a walrus named Freya appeared in a Norwegian harbor, and when locals didn’t heed warnings to keep away, officials had her euthanized.

Freya wasn’t known to have hurt anyone, but officials worried that her closeness to humans could inadvertently lead to someone being injured.

“She chased people on paddle boards and kayaks,” said Olav Lekver, a spokesman for the Norwegian Directorate of Fisheries. “In the end, we couldn’t see any other options. She was in an area that wasn’t natural for her.” 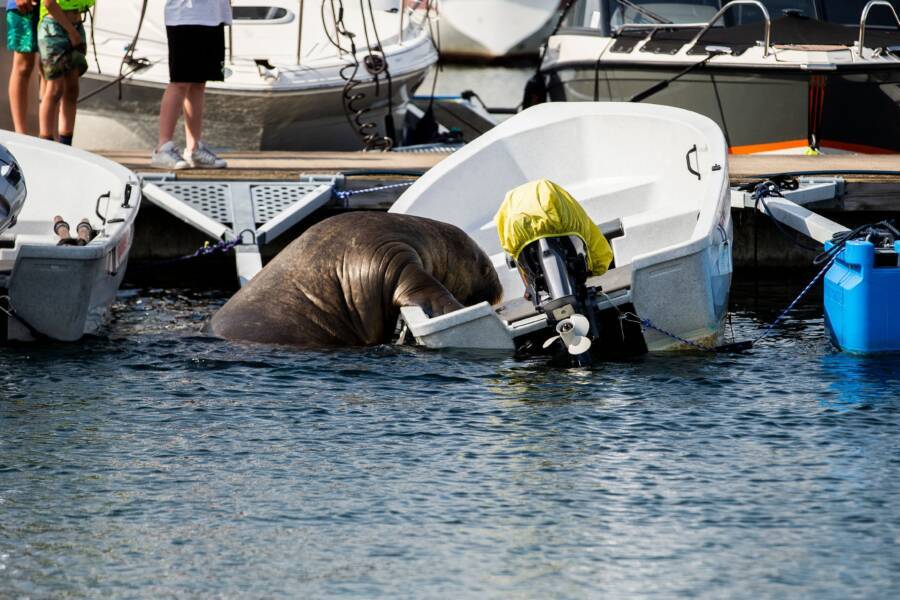 Trond Reidar Teigen/NTB/AFP via Getty ImagesFreya the walrus climbing onto a boat in Norway, shortly before she was killed.

A number of factors contributed to Freya’s arrival in Norway, but one of the most prominent is the ongoing climate crisis that has caused temperatures to rise, melting the icy waters in which walruses normally live and forcing them to seek new environments.

In fact, The Guardian reported that some experts believe Thor’s stop in Scarborough — and his later arrival in Blyth — was also the result of habitat loss caused by rising temperatures.

“It’s not very normal to see walruses down here so we imagine it is because of climate change,” Molly Gray of the British Divers Marine Life Rescue told The Guardian.

Despite this, some climate change deniers continue to argue that the environment is not being impacted by a warming earth. But incidents like those involving Thor and Freya paint a different picture: Walruses are showing up in areas far from their natural habitats, and in some cases, it’s getting them killed.

Fortunately, Thor’s journey continued uninterrupted, and though the spectacle of his arrival may have overshadowed the reason behind it, it’s getting harder and harder to deny that climate change is having a major impact on wildlife.

After reading about Thor’s highly publicized stop in Scarborough, read about the walrus who fell asleep on an ice floe and traveled thousands of miles to Ireland. Then, read about the time a walrus sank a small Russian naval vessel during an Arctic expedition.