Walruses are an incredibly rare sight in Ireland, considering most of them live thousands of miles away in the Arctic Circle. 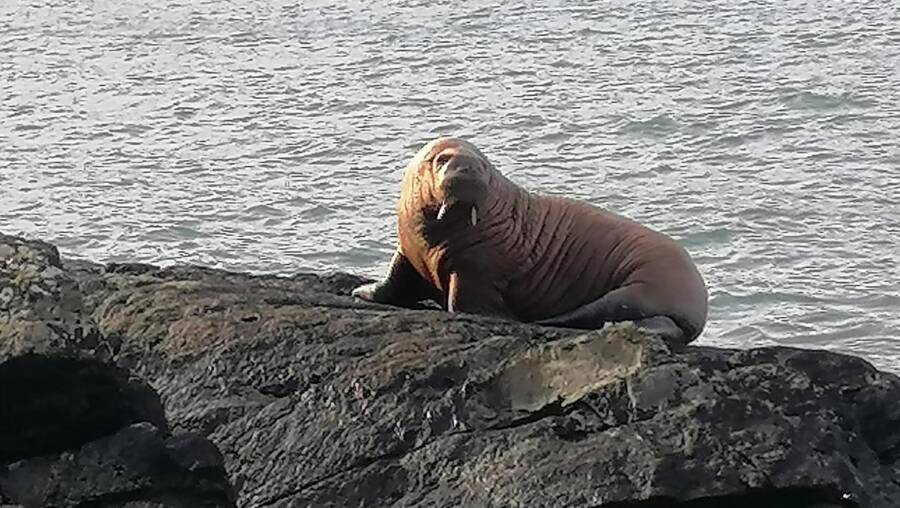 Alan HoulihanWalruses are very rarely seen in Ireland, leading one marine biologist to suspect that this one accidentally fell asleep on an ice floe and drifted there.

Oversleeping can cause all sorts of problems. Just ask this walrus — who seems to have fallen asleep on an ice floe and drifted at least a thousand miles from the Arctic Circle to Ireland.

The walrus was first spotted along the coast of Valentia Island in County Kerry, one of the westernmost points of Ireland. Alan Houlihan and his 5-year-old daughter, Muireann, were walking along the beach this past weekend when they noticed the creature lounging on some rocks.

“I thought it was a seal at first, and then we saw the tusks,” Houlihan said. “He kind of jumped up on the rocks. He was massive. He was about the size of a bull or a cow, pretty similar in size; he’s big, big.”

Walruses rarely appear in Ireland, so how did this one end up on the coast? According to Kevin Flannery, director of the Dingle Oceanworld Aquarium in County Kerry, it may have been an accident.

“I’d say what happened is he fell asleep on an iceberg and drifted off,” Flannery said. “Then he was gone too far, out into the mid-Atlantic or somewhere like that — down off Greenland possibly. It’s incredible. It’s a one-off as far as I’m concerned.” 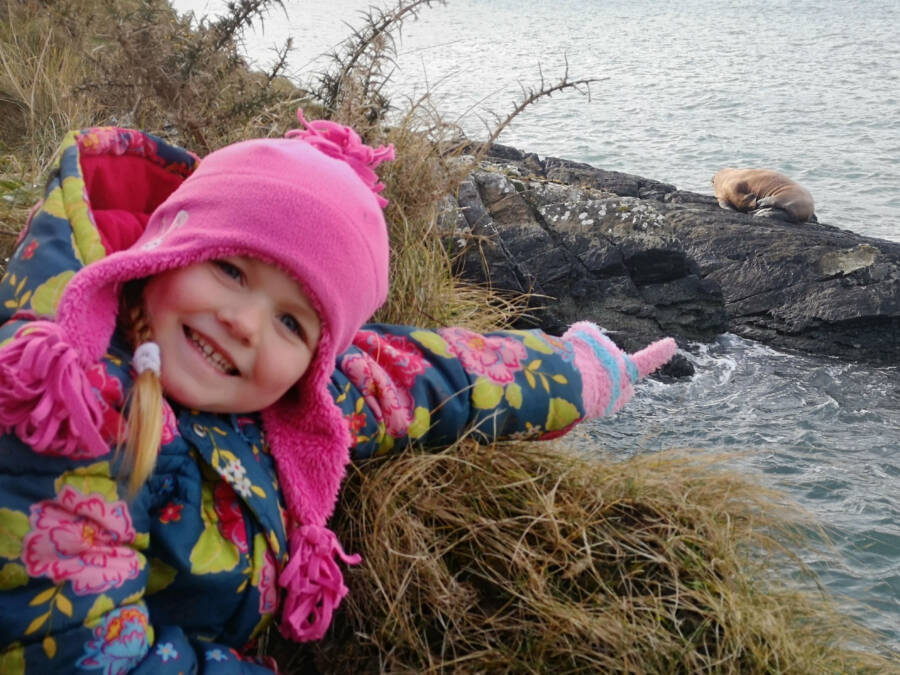 TwitterFive-year-old Muireann was the first to spot the walrus, her dad, Alan Houlihan said.

The first recorded sighting of a walrus along the Irish coast was in 1897 — and no other sightings were reported until the 1980s. In the years since, fewer than a dozen walruses have been seen in Ireland.

That’s because they normally live much farther north, in the Arctic Circle. There, they can hunt for meals in the shallow water and rest on the shore or on ice floes, as appeared to be the case with this walrus that the Houlihans spotted.

Sometimes, Flannery explained, people in Ireland think they’ve seen walruses when they’re actually spotting seals. But, Flannery studied the photos and videos of this walrus and confirmed: It wasn’t just “a seal with a toothache.” 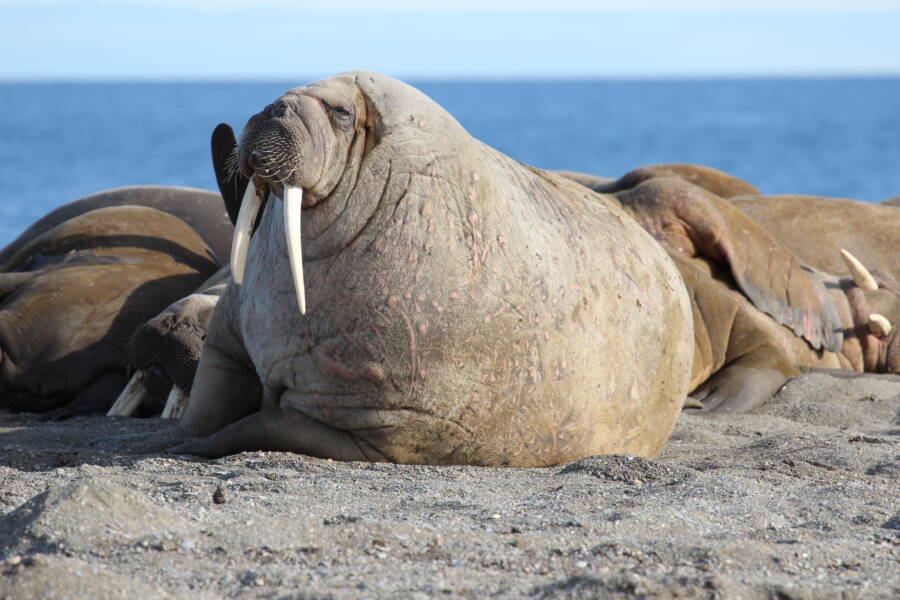 Wikimedia CommonsMost walruses live thousands of miles away from Ireland, in the Arctic Circle.

Judging by the length of the tusks of this walrus, he seems to be young. Adult walruses can grow tusks as long as 3.3 feet. The walrus on the Irish coast has much smaller, roughly one-foot tusks, however.

An Arctic Walrus has landed on Valentia Island… believed to have made its way all the way from Greenland! It appears to be exhausted. Video by Alan Houlihan, who’s 5 year old daughter was the first to spot the walrus. #Kerry pic.twitter.com/TLtBLBAZDk

“He’s come from the North Pole, possibly off Greenland,” theorized Flannery. “He could also be island-hopping and went to Iceland and on to Shetland, but that’s unlikely. I’d say he came in out of the Atlantic. It’s thousands of miles away.”

Although he’d had a long journey, the walrus gave Houlihan and his daughter “a bit of a show.”

“It’s brilliant,” Houlihan gushed. “He was sitting on the rock now, kind of posing; at one stage there, he threw up a fin, and it looked like he was giving us all the birdie.” For spotting the walrus, Houlihan added, he’s dubbed his daughter “the David Attenborough of Valencia Island.”

So, what comes next for this wayward traveler? For now, it looks like the walrus is fairly exhausted after his accidental journey to Ireland. 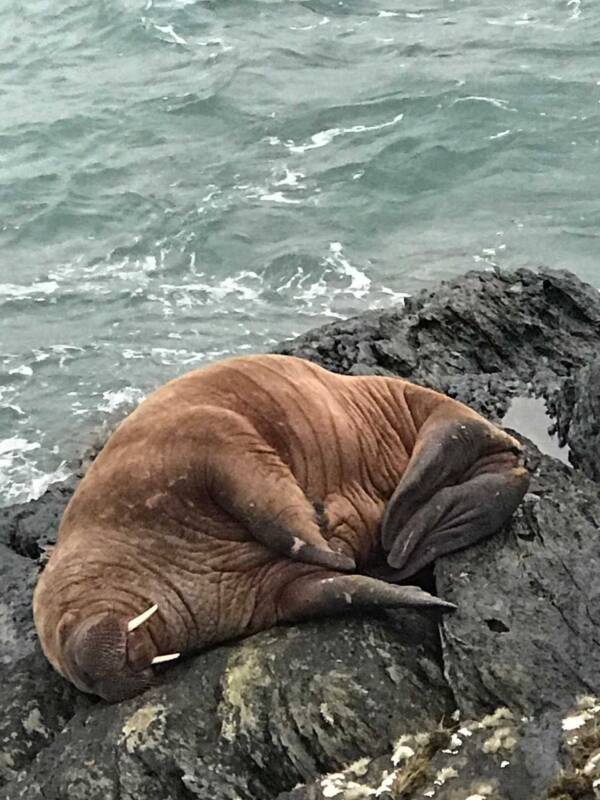 TwitterMarine biologists suggest leaving the walrus alone while he regains his strength.

“Hopefully he’ll get a few scallops around Valentia,” Flannery said, noting that the walrus’s tusks will help him dig up clams. “But at this point, he wants to rest… If he regains his strength, hopefully he’ll make his way back up.”

The walrus, Flannery noted, would be “pretty tired and pretty hungry at this stage.” So, curious onlookers should leave him alone. “He’s on the rocks, asleep. I’m asking for people to [let] him rest until he goes back,” Flannery added.

Perhaps the walrus has already begun his return journey to the Arctic Circle, as Alan Houlihan recently went to check on his new friend and found the beach empty.

“I went down early this morning and there’s no sign of him,” Houlihan said. “So I hope he’s eating scallops and getting ready for his journey back.”

If the walrus decides that Ireland is to his liking and chooses to stick around, Muireann already has names picked out, Houlihan reported.

Lacking any further sightings, it seems that Isabelle — or, more likely, given the tusks, Cian — has already embarked on the long, long journey home.

After reading about the walrus that dozed off and ended up in Ireland, read about these 21 incredible animals found in the Arctic. Or, read about how Ireland’s Cliffs of Moher became one of the country’s most popular attractions.