The tens of thousands of bees are believed to have descended upon the hot dog stand to escape the extremely hot conditions of their previous hive. 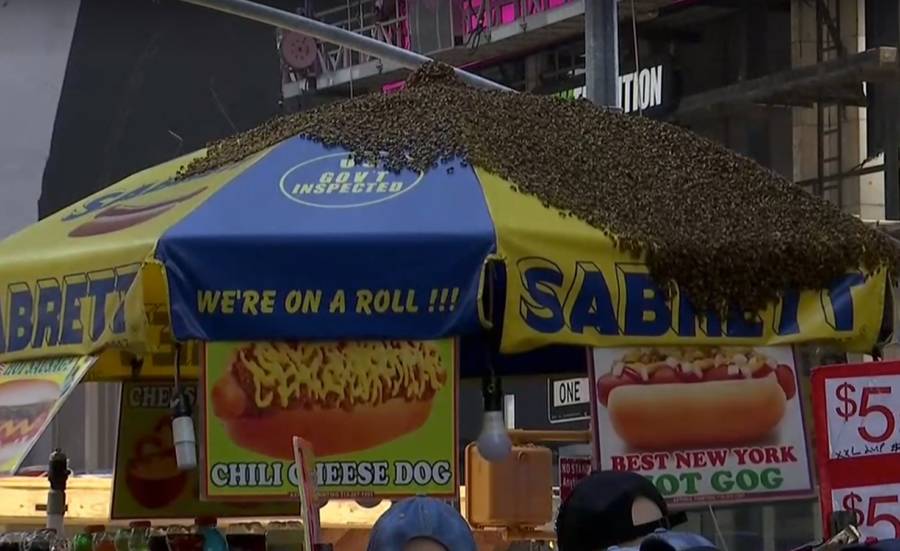 New York City was abuzz this week after a swarm of bees made an unwelcome appearance at a hot dog stand in Times Square.

Around 1 p.m. on Aug. 28, some 20,000 bees swarmed an unsuspecting hotdog stand just one block south of Times Square, according to The Guardian. Clinging to the top of an iconic blue and yellow umbrella of a Sabrett hot dog stand, the thousands of bees packed themselves into a roughly 15-square-foot clump.

A live stream from Reuters captured the madness, giving people around the world the opportunity to catch the saga you have to see to bee-lieve.

Officer Darren Mays, one of the New York Police Department’s two official beekeepers, told CNN that the swarm was most likely just trying to escape the sweltering city heat.

“The hive got overcrowded because it was hot and humid and they just needed a new place to go so they can keep cool,” Mays said. 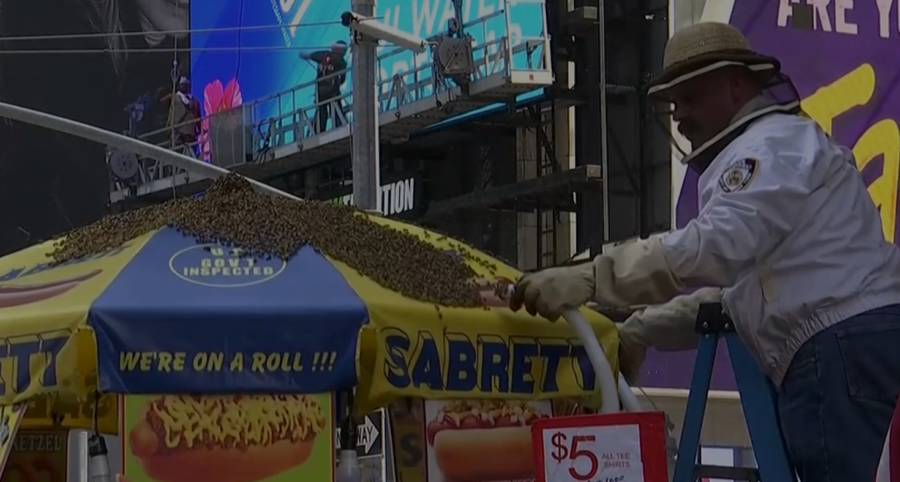 ReutersNYPD Officer Michael Lauriano on the scene in Times Square removing the bees.

NYPD officer Michael Lariano, the other half the NYPD’s official beekeeping team, was called to the hotdog stand in order to safely remove the swarm. The street was shut down in order to avoid any injuries but flocks of people still crowded around to watch the ordeal.

Officer Lauriano arrived on scene decked out in a full beekeeper’s uniform and used a specially designed vacuum to suck up the bees, according to CNN. 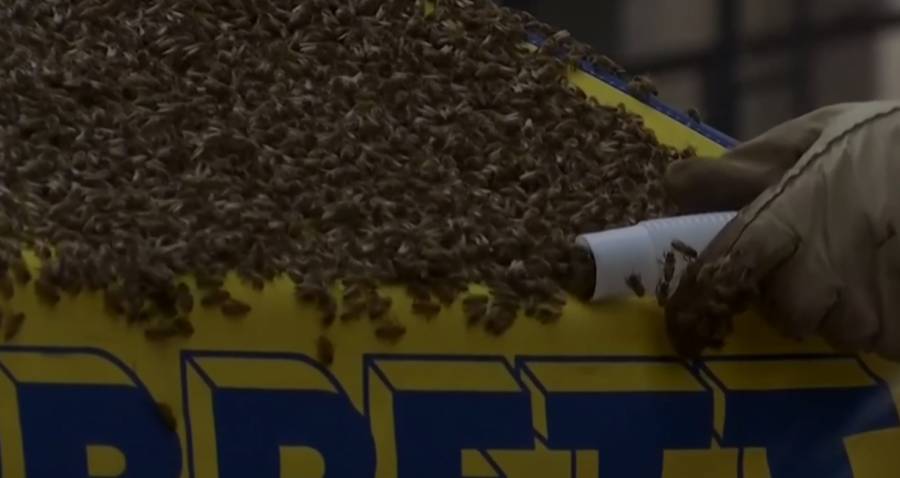 ReutersThe careful process of removing the bees via vacuum.

After roughly 45 minutes, a majority of the bees were safely removed and the street was reopened. Andrew Coté, who runs the New York City beekeepers’ association, was on the scene and jokingly told The Guardian that the bees probably were just a little hungry.

“I think they wanted a hot dog,” Coté joked.

Coté later said that the swarm most likely came to the hotdog stand as a result of living in a poorly-managed beehive. Rooftop beekeeping is a pretty common practice in the city and the experts say that there were likely many rooftop hives in the area surrounding the hot dog stand.

Not sure who’s rooftop, but there are several hives in that area where people are keeping bees. https://t.co/DX8t6S987I

The two-man NYPD beekeeping team has emerged from this story as the city’s newest celebrities. Their Twitter account has seen a huge uptick in followers and interactions following the incident.

Mays and Lauriano serve their beekeeping duties on top of their regular cop duties. According to a tweet from the NYPD Bees account, the officers have served each 17 and 18 years as cops and they have 10 years and 5 years of beekeeping experience.

I actually think they were trying to get an Air🐝n🐝 in Times Square https://t.co/znrVFhMkAi

According to CNN, the bees were captured safely inside of a hive box and are being transported to an apiary on Long Island and, somewhat miraculously, no one was injured during the incident.

It looks like what might have been a potentially dangerous situation actually turned out to be one of the only free shows that tourists can catch in Times Square.

Up next, discover Rat Island, the only privately-owned island in New York City. Then check out these 44 colorized photos that bring the streets of century-old New York City to life.