After fleeing a ranch near São Paulo, the cow explored a nearby amusement park and even slid down a water slide. 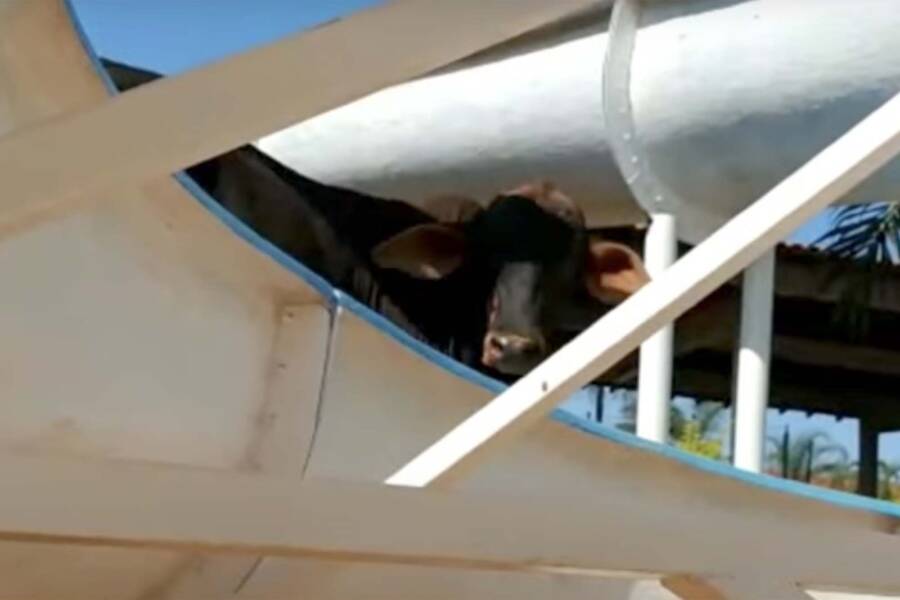 YouTubeThe escaped cow peers at the human who caught its escapade on camera.

With a new lease on life, a Brazilian cow who’d escaped a slaughterhouse headed straight for an amusement park. There, the 700-bovine enjoyed the waterslide. Until it got stuck.

The cow caper took place around 500 miles west of Rio de Janeiro, where the cow destined for slaughter escaped its ranch and trotted over to a cub in Nova Granada. Finding the park closed, the fugitive made its way inside.

“He was in the pasture and from the pasture he escaped to the boundary of the club,” explained Carlos Miguel Serante, who raises cattle on a ranch next to the Nova Granada club. “He entered the club, skirted the fence, and entered the pool.”

Once there, the bovine made a beeline for a bright blue waterside. After scaling the stairs, it did the only thing it could — cows can climb down stairs, but they don’t like to — and started to slide down toward the placid pool below.

Club president João Luiz Andrade Zevole watched in shock as the cow climbed the slide. “He was looking at me, I was looking at him,” Zevole said. “Then he went down the water slide, he was slipping.”

Serante was similarly dumbfounded by the cow’s antics. “A guy came to tell me he had climbed on top of the slide,” he said. “I didn’t believe it.”

He added, “I didn’t think he would go up. He’s a two-year-old garrote. He’s brand new.” 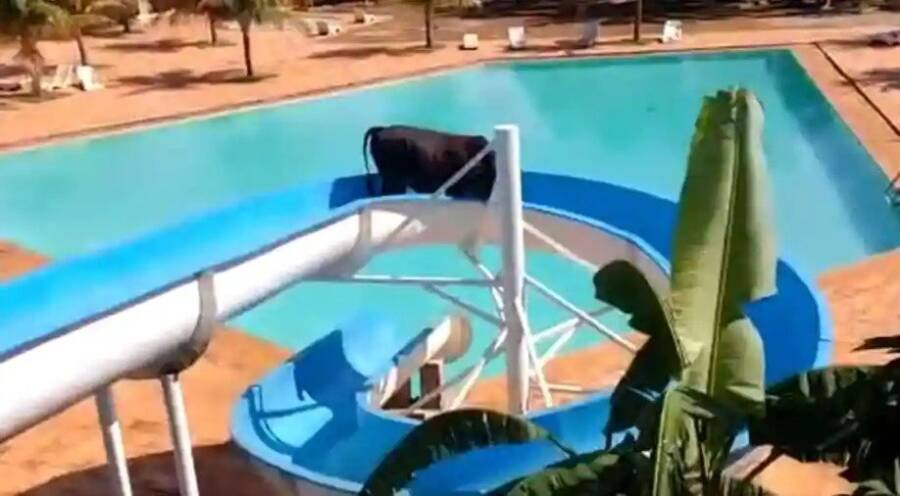 YouTubeThe escaped cow at the top of the slide, shortly before it slid down.

Its jerking, uncertain movements were caught on tape by a befuddled human being standing nearby. The cow, navigating a water slide with no water, first attempted to walk delicately along. But gravity intervened, and the animal soon jerked forward, sliding several feet before it regained its balance.

After taking a few, tentative, wobbly steps, the cow gave up and collapsed.

Incredibly, the slide supported its weight. Although the ride was allegedly just strong enough to support a 450-pound human, the cow clocked in at whopping 700 pounds. Yet the slide held.

From there, Serante and others were able to loop a rope around the cow. They encouraged it forward into the pool, and then were able to pull it out.

“I looked to see if he had any injuries,” Serante said, “but he’s fine.”

Zevole laughed off the bizarre incident. “The animal was a little hot, wanted to swim and use the water slide, that’s all,” he said.

And the pool manager thought that the whole thing was a big joke. “I thought he was joking, joking, and I even thought about taking care of something else, but first I went to see what was going on,” Alaides Alves Pereira da Silva exclaimed.

“When I arrived, he was already struggling with the ox, but he went down, took a dip and left.” 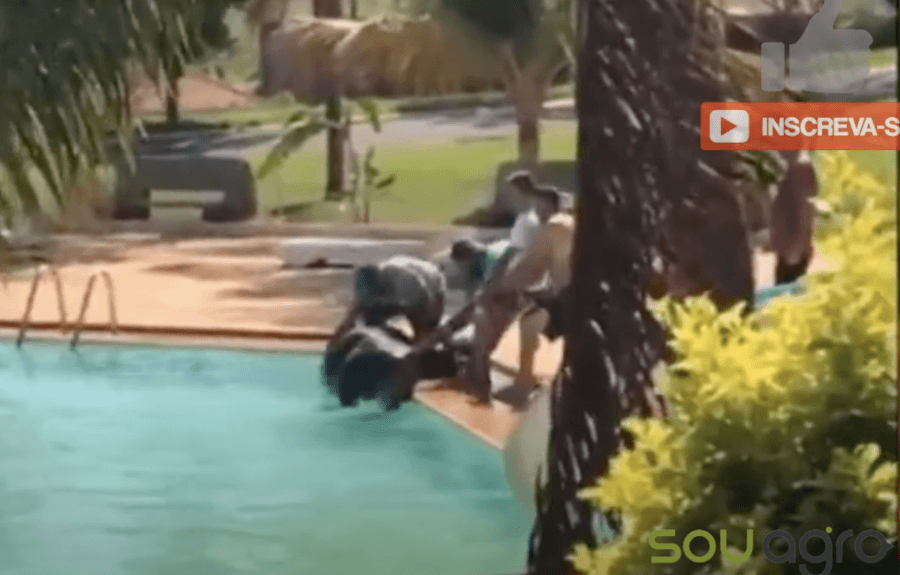 The rancher then brought the cow back home. But its sudden fame — a video of the cow on the slide currently has more than 272,000 views on YouTube — and its brief escape caused Serante to change his mind about slaughtering it.

“He’ll stay here because of the people” Serante said. “The people want to know where he is. He’s been the attraction. Everyone wants to know. We want to take him to the club.”

Instead, the rancher has announced that he’ll keep the lucky two-year-old, 700-pound escapee as a family pet.

He’s even given the cow a new name. From now on, the cow will be called Tobogã. Appropriately, the name is Portuguese for “Slide.”

You can watch all this lucky cow’s water park antics here.

After reading about the cow who escaped to an amusement park, learn about the giant cow named Knickers whose girth saved its life. Or, discover the story of the Polish cow whose daring escaped saved it from the slaughterhouse.