The 72-foot vessel was carrying three metric tons of cocaine. 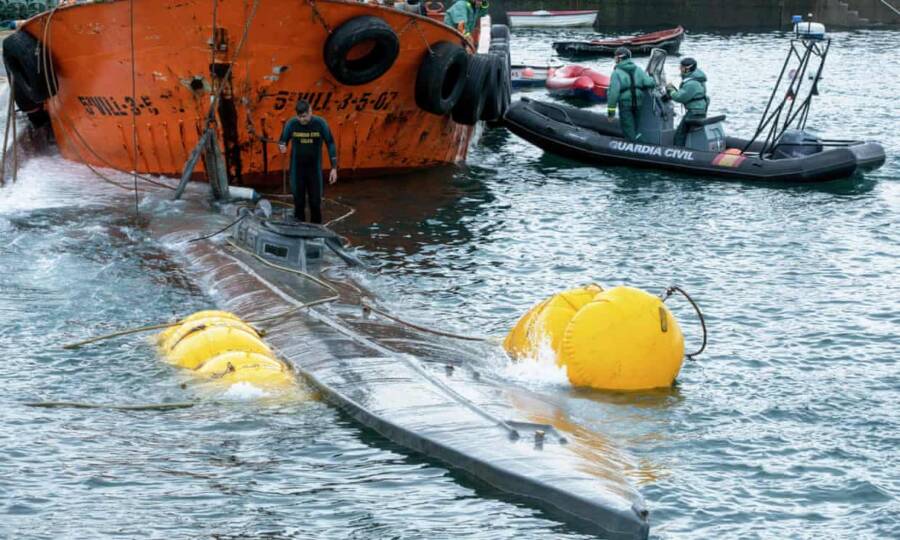 Lalo R Villar/AFP/Getty ImagesMore than three tons of cocaine worth $100 million were found aboard this narcosub.

The history of drug smuggling boasts no shortage of inventive ways to move contraband from point A to point B. And now we can officially add trans-Atlantic submarine transport to that list.

According to the Guardian, Spanish authorities intercepted a drug-smuggling submarine — typically known as a “narcosub” — off the coast of Galicia on Dec. 1. The sub, containing some $100 million worth of cocaine, had started its journey all the way back in South America (exact origins remain unclear, but there are links to at least Ecuador, Colombia, and Guyana).

This maritime sting was the result of international cooperation between authorities from Spain, the U.K., Portugal, Brazil, and the U.S. which tracked the fiberglass submarine all the way across the Atlantic (this was the first captured narcosub ever known to have made such a journey), covering nearly 5,000 miles of open waters between South America and northwest Europe.

But as international police tried to intercept the vessel, it began to sink in the Aldán inlet of Galicia. It wasn’t clear what the cause of the submarine’s sinking was and whether it was deliberately sunk on purpose by the suspects on board in order to conceal their crimes.

Local authorities quickly began efforts to bring the vessel to shore but terrible weather conditions delayed the operation. Police were finally able to refloat the vessel and tow it out of the water. When the 72-foot vessel was unlocked, more than three metric tons of cocaine were found on board. 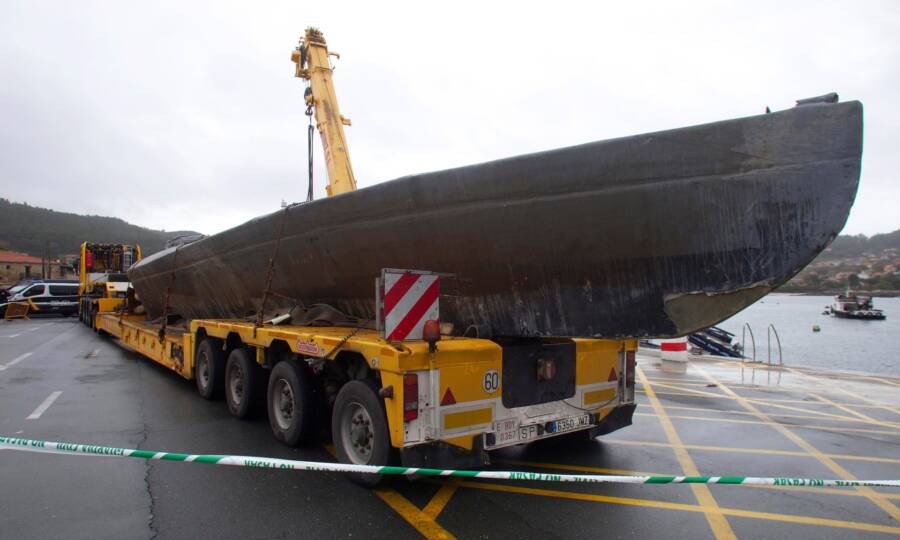 Salvador Sas/EFERumors of drug traffickers expanding their narcosub operations into Europe have been swirling for the last decade.

Javier Losada de Azpiazu, the federal government’s delegate in Galicia, called the drug sting operation “historic,” adding that this was the first time a narcosub had ever been seized in European waters. It’s unclear where the drug delivery was heading exactly, but British authorities believe much of the illegal cargo would’ve made its way into Britain.

“It is highly likely a lot of this cocaine would have ended up on the streets of the U.K., fueling serious violence and impacting on the most vulnerable members of society,” Tom Dowdall, deputy director international of the U.K. National Crime Agency (NCA) — which took part in the drug bust — said.

“Seizures like this are vital in disrupting and dismantling transnational crime groups trafficking deadly drugs, and ultimately protecting the public from the damage they cause.” According to investigators, the drug cargo is believed to have departed from Colombia but the submarine itself was built in Guyana. They also said the vessel appeared to have been “operating for years.”

As for the submarine smugglers, local news agency Efe reported that a total of three suspects have been arrested. The suspected pilot of the submarine was arrested in the Galician town of Cangas — still wearing his wetsuit — while two others were arrested elsewhere.

Narcosubs are not new in the drug-trafficking world. Previous captures of narcosubs carrying illegal substances around the U.S. and South America have been made before but the use of these underwater vessels is quite rare in Europe. However, the recent narcosub capture in the Atlantic could signal a shift in international drug operations. 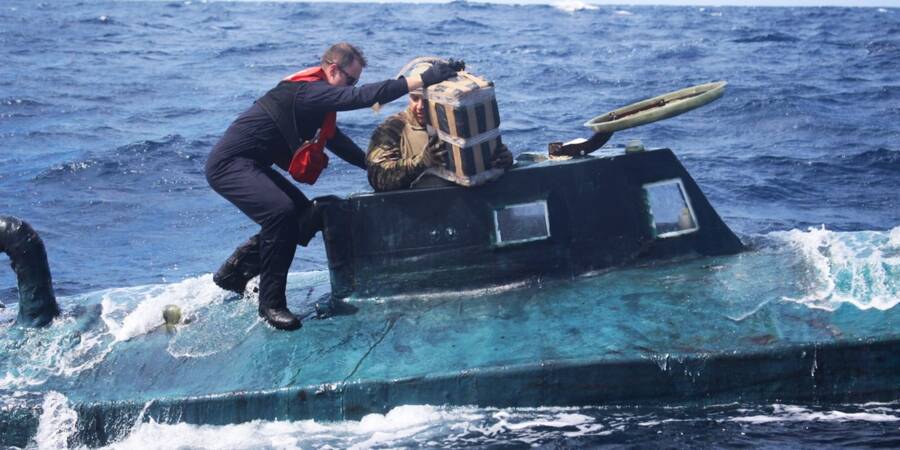 According to Coast Guard Lt. Commander Stephen Brickey, a growing number of Central and South American drug cartels are using semi-submersible submarines to smuggle drugs into the U.S.

These vessels are expensive to build and need remote areas where they can be built without being detected, like in the bush or jungle. Officials estimated the submarine in the recent sting would’ve cost around $2.8 million to build, suggesting a highly-funded drug ring was behind it.

Despite the costs and potential risks, once these narcosubs are submerged underwater, they can easily evade detection which is surely why they have become a popular mode of transport among traffickers in both North and South America.

“They blend in,” Brickey told CNN. “Most of the vessel is underwater, so it’s hard to pick out.”

According to local news outlet El País, rumors of narcosubs smuggling drugs between Spain and Africa through Galicia — a popular drug route due to its strategic coastline — have swirled among anti-drug units for the past decade. But none had ever been detected or caught in European waters — until now.

Next, read the bizarre case of a Missouri nun who smuggled two pounds of cocaine in her heels then blamed it on her internet boyfriend. Then, find out how feral pigs ate and destroyed $22,000 worth of drugs hidden in an Italian forest.