This sewage system was constructed while the Roman Empire was in control of the city of Tripolis in the second century A.D., and it remains fully intact to this day. 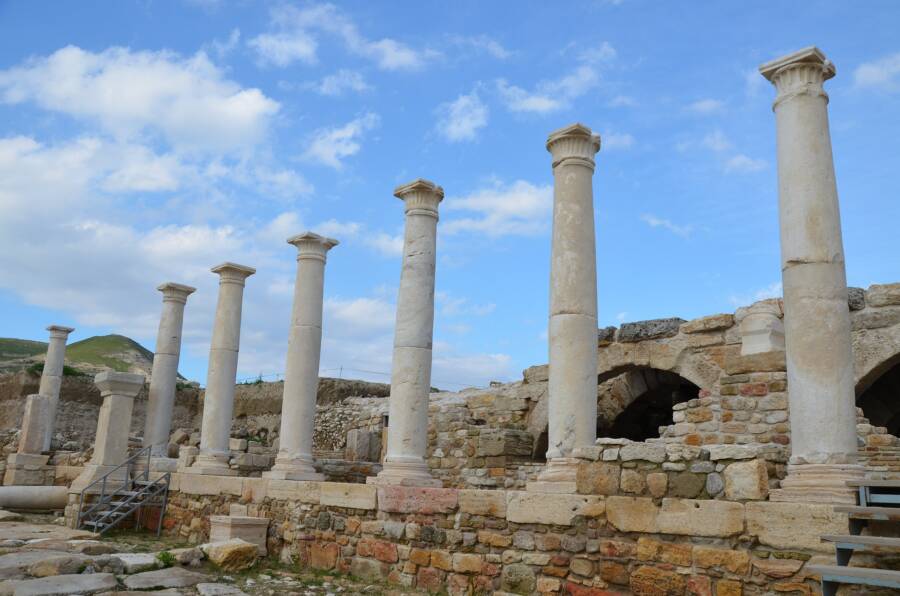 Wikimedia CommonsThe ruins of Tripolis on the Meander in southwestern Turkey.

The ancient city of Tripolis on the Meander in western Turkey has provided historians with invaluable ruins to study. Also known as Neapolis or Apollonia, the town dates back to the third century B.C. and is located in the Buldan district of the Denizli province. Remarkably, it has just yielded a 2,000-year-old Roman sewer system.

According to Hürriyet Daily News, excavations here have been ongoing throughout 2021, spearheaded by Bahadır Duman, an associate professor at the Archaeology Department of the Pamukkale University.

“While working in the sanctuary, which we can call the heart of the city, we found various finds dating back to the Hellenistic era,” he said. “A sewer system was detected right under the one-kilometer-long Colonnaded Street, which is one of the mains roads of the city. This year, we cleaned a part of it during the excavations.”

Remarkably, he said, they were even walkable, measuring over five feet in height and over two feet wide. “The gigantic sewer has dimensions that a person can easily enter and walk through,” he said. 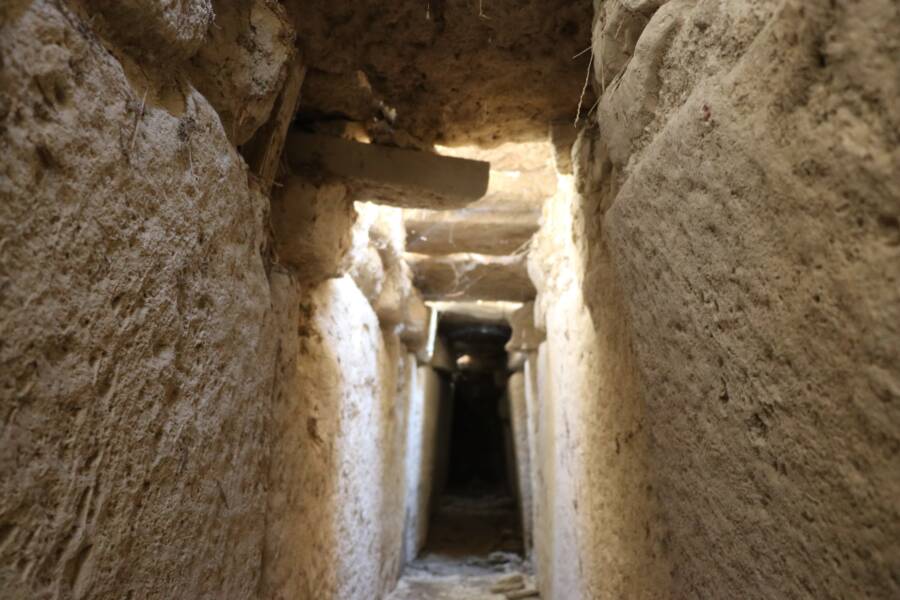 Anadolu Agency/Turkey’s Ministry of Culture and Tourism The sewage system is more than five feet high and more than two feet wide.

The engineering of the sewers marked them as Roman — not an unusual find in this region of Turkey. What differentiated these, Duman said, was the fact that they were fully intact.

“The difference of the systems in Tripolis from the others is that it is still intact,” said Duman. “The main sewer system is one of the rare examples, which makes it important. The city has two nine-meter-wide streets that we have found so far. We believe this system was made to provide a clean environment.”

“We are planning to open the sewerage systems under all the main streets within five years.”

Duman and his research team have already determined that all of the ancient city’s wastewater was collected in the central sewer system, which fed its contents to a nearby stream. At that point, nature ran its course — transporting the waste to the Meander River and eventually to the Mediterranean Sea. 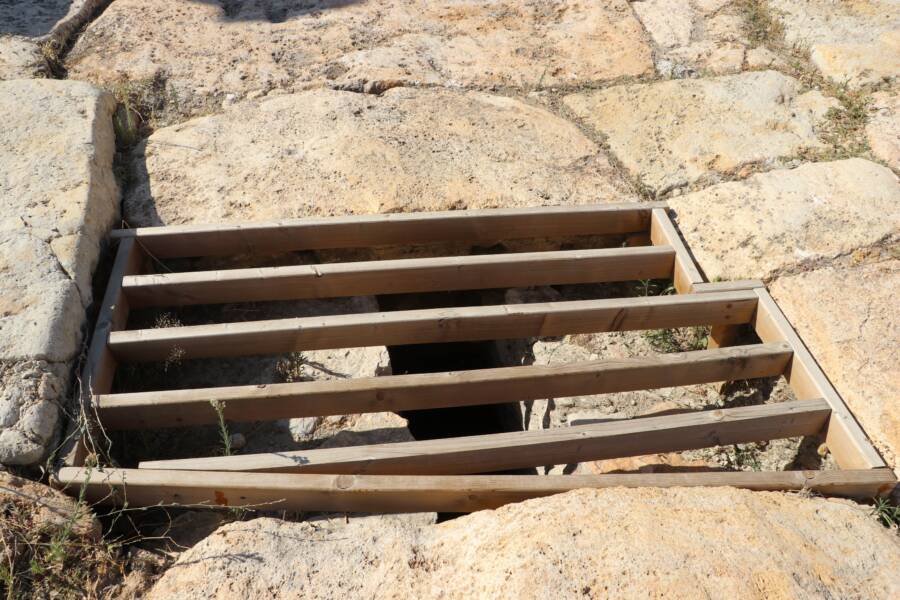 Anadolu Agency/Turkey’s Ministry of Culture and Tourism The sewage system led the city’s waste into a local stream which carried the contents into the Meander River.

Tripolis has a rich and fascinating history. Founded on the northern bank of the Meander River, the city was first documented by the Romans in the first century A.D. by Pliny the Elder, a Roman author whose nephew recorded Mount Vesuvius’ eruption in 79 A.D.

According to Turkish Archaeological News, Tripolis was a very influential city due to its location on trade routes connecting Phrygia, Lidia, and Caria. And its position on the Meander River, which linked inner Anatolia with the Aegean and Mediterranean Seas, only bolstered the town’s popularity. Remarkably, excavations only began in the 1990s.

Historians still debate when exactly the city was founded. However, the most likely dating suggests the sixth century B.C., although sparse evidence exists from the early Lidian, Persian and Hellenistic periods. Most of the monuments date from the Roman era, which spanned from the first to the fourth centuries.

And it was during the Roman rule that the city began to prosper, particularly after the second century, with additions of city gates, baths, a stadium, streets, a city council — and sewers. 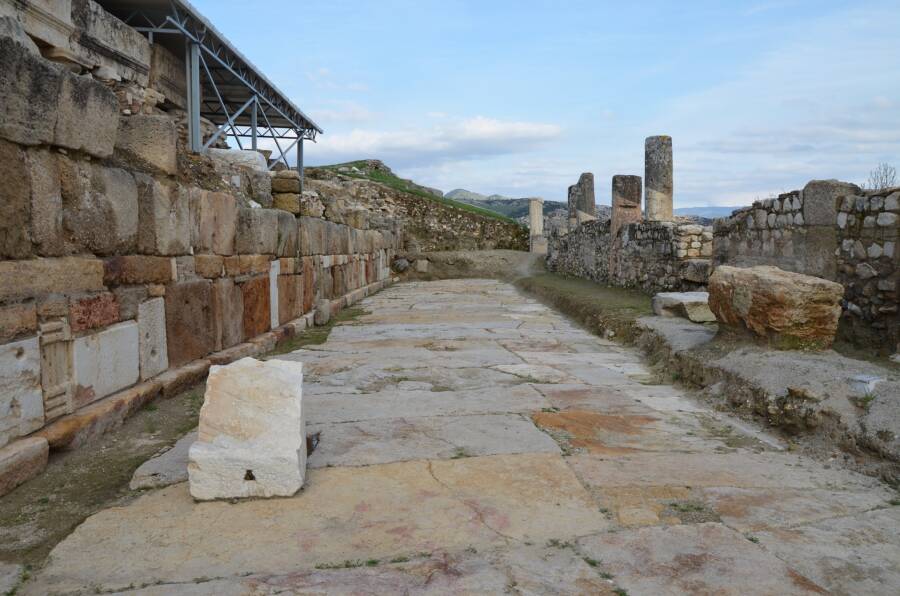 Wikimedia CommonsThe ruins of Tripolis are no longer accessible to the public and exclusively used for archaeological research.

The fall of Tripolis began slowly. Partially destroyed by an earthquake in 494 A.D., citizens began relocating elsewhere. Persian invasions would plague the descendants of those who stayed during the sixth and seventh centuries until the town was fully abandoned in the 13th century.

Fortunately for historians, excavation work by the Museum of Denizli finally began in 1994 and has only ramped up since. Two further archaeological digs followed in 2007 and 2009, with Turkey’s Ministry of Culture and Tourism funding extensive digs in 2012, which have remained ongoing.

Previous finds have included the remnants of a sixth-century Byzantine church, frescoes depicting Jesus Christ, the Virgin Mary, and Biblical apostles. And this discovery of a 2,000-year-old sewage system has showcased the proficiency of Roman engineering and indicated the empire’s dominant presence.

However, those hoping to walk the city grounds themselves might have to join Duman’s excavation team. Although visitors could enter virtually unregulated as recently as 2013, access is now only permitted to those engaged in archaeological work.