For decades, the lives of Soviet citizens hung on the whims of Trofim Lysenko, a man who believed that plants could be taught to bloom in winter and that nature could be mastered by raw force. 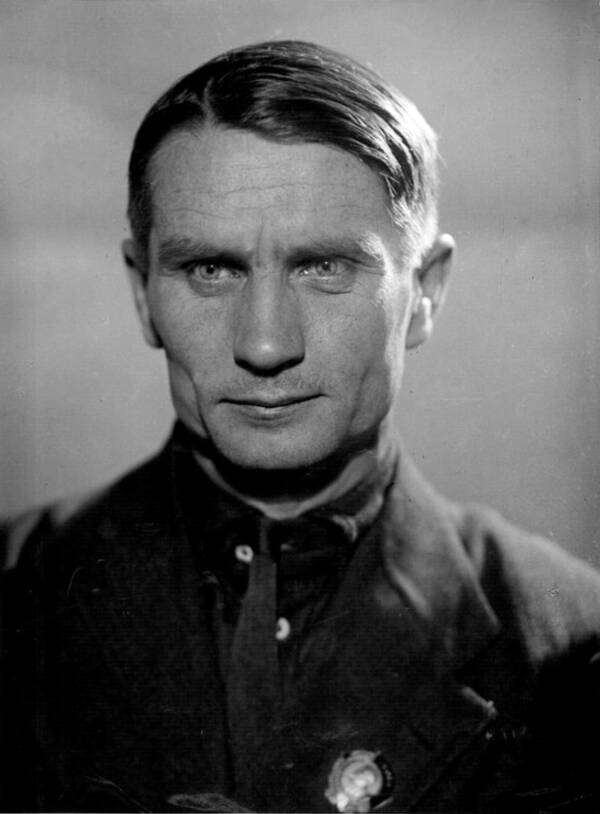 Wikimedia CommonsSoviet scientist Trofim Lysenko brought ruin to millions based on his utterly illogical beliefs about the behavior of plants.

To the earliest leaders of the Soviet Union, nothing seemed impossible. They had toppled their old order and fended off the combined armies of the world’s great powers in World War I. They believed that the next logical step was to conquer the scientific world. Enter: Trofim Lysenko.

Lysenko was an incompetent agronomist who garnered a level of respect among Soviet leaders that was as misdirected as his scientific beliefs. For one thing, he didn’t really believe in genetics. Instead, Lysenko thought that seeds could be “educated” or trained to respond directly to the stimuli in their environment.

As head of Soviet agriculture, Lysenko spun impossible tales of how his pseudoscience could produce all manner of crops in Russia, and Soviet leaders looking to establish their nation as a leader in science supported him.

What ensued was a bizarre series of agricultural experiments that ultimately ended in disaster, famine, and spelled the deaths of as many as 7 million Russians. 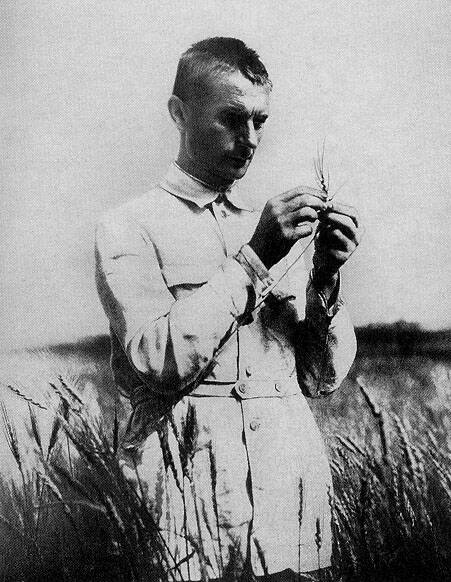 Wikimedia CommonsTrofim Lysenko’s peasant background, love of folklore, and haphazard approach to science made him the darling of the Communist Party, which hailed him as a hero of the Russian working class.

Stalin, however, inherited a desperately hungry and under-developed country. Surveying the war-torn land, Stalin decided that because the preceding centuries hadn’t carried Russian agriculture into the 20th century, it was up to him to drag it there.

One of his most devoted followers was Trofim Denisovich Lysenko, a man who believed Soviet Communism could achieve anything. He grew up in poverty in what is now Ukraine, so he was no stranger to hunger. But as a result of this upbringing, he came to see food, and the lack of it, as enemies to be vanquished.

Dedicating himself to science, Lysenko became an agronomist in 1925 and was soon deployed to a remote research station in Azerbaijan. But despite his degree, Lysenko had garnered some truly bizarre ideas about science.

For starters, he believed that plants and seeds could be trained to follow socialist organizational principles. His theory, which would eventually be dubbed Lysenkoism, stated that crops could be trained to conform and produce vast yields almost from out of thin air. According to what he called “the law of the life of species,” seeds wouldn’t compete with one another, but rather they would cooperate with each other in a near-sentient fashion — like humans.

Applying the Marxist principle of materialism, in which the conditions surrounding an individual dictate its behaviors and responses, Lysenko believed that plants and animals, too, could be reshaped as needed.

In 1927, Lysenko’s theories appeared to be proven when a crop of peas he’d planted in the winter before burst forth into green life. He thought this proved that he had taught the peas to grow even in their off-season simply by exposing them to the cold.

A glowing write-up in Pravda, the Communist Party newspaper, followed, which lauded his achievement in “turning the barren fields of the Transcaucasus green in winter, so that cattle will not perish from poor feeding, and the peasant Turk will live through the winter without trembling for tomorrow.” 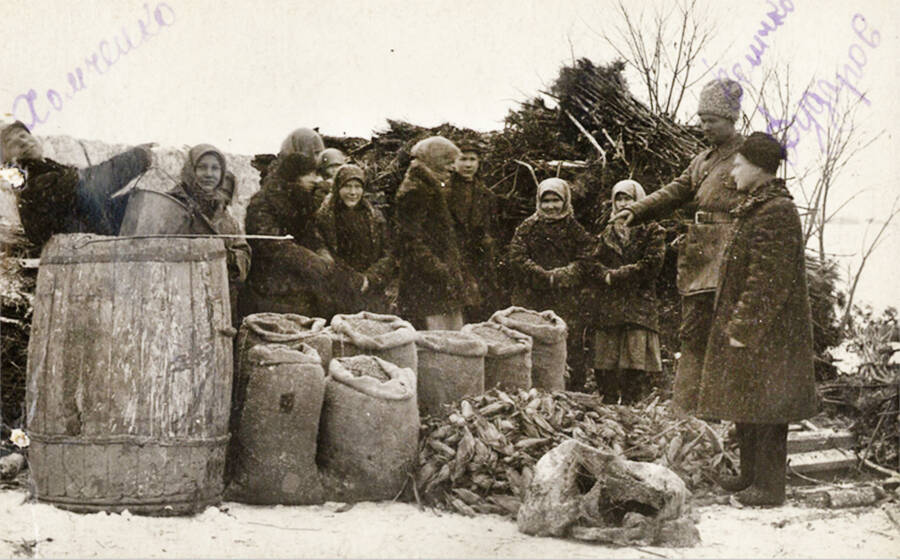 Wikimedia CommonsWhen starving Ukrainians tried to hoard grain to feed themselves, troops were sent out to requisition their crops by force.

What Lysenko had “discovered” was actually a well-known process in which the extreme cold induces the seeds to flower. Russian peasants, and indeed farmers from all over the world, had been doing this for centuries, but Lysenko claimed to have reinvented the idea and proudly promoted it as what he called “Jarovization”. He loudly announced his “success” in the media.

But where Lysenko truly doomed Russia was in claiming that the results of his work, a flowering vegetable in winter, would be remembered by the plant and passed onto its offspring. This idea already existed, it was called “soft inheritance,” or Lamarckism for the French zoologist Jean-Baptiste Lamarck who coined it. The theory posited that traits garnered by a plant or animal while alive could be passed on to its offspring. 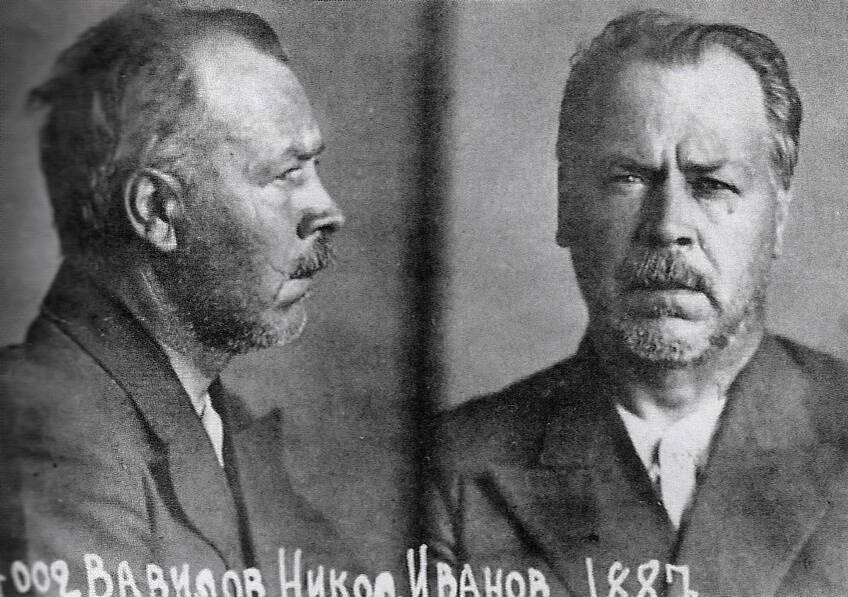 Wikimedia CommonsNikolai Vavilov was once one of Russia’s most promising food scientists, but his rivalry with Lysenko cost him his freedom — and his life.

Even though Lysenko’s scientific credentials and methods were sorely lacking and his theories flawed, he happened to be in the right Russia at the right time.

In 1928, Stalin initiated the collectivization of all farms across the Soviet Union, forcing peasants across the country onto cooperatives under state control in what amounted to a hostile takeover of traditional Russian agriculture. The result was catastrophic. Crops were destroyed, viable land was lost, grain was hoarded, and famine engrossed the country.

Stalin was desperate for a miraculous solution, and so when he received word of the audacious young scientist named Trofim Lysenko, he ordered him to spread his ludicrous ideas to the struggling collective farms.

Lysenko promised to transform the whole of Russia into a super-farm that churned out unnaturally durable produce. It was music to Stalin’s ears — but a death knell for millions.

How Science Was Crushed In The Face Of Lysenkoism 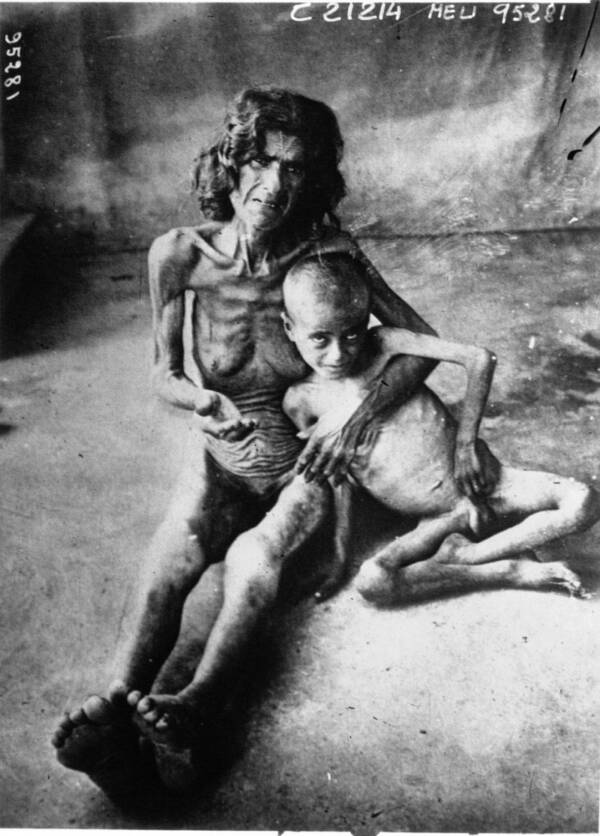 Wikimedia CommonsAlthough most of Lysenko’s victims were Ukrainian, a substantial number could be found elsewhere in the Soviet Union, like these survivors from Kazakhstan.

Consolidating the country’s farms was a disaster in itself, but adding Trofim Lysenko’s dangerous brand of pseudoscience to the mix only worsened the crisis. His choice to expose seeds to different temperatures, pack them tightly together in the fields and forbid the use of pesticides and fertilizers resulted in record crop failures.

Especially risky were his treatments like scraping seeds with sandpaper or treating them with acid, which weakened them to blights and fungal infections, making any plants that did sprout insufficient for food and potentially dangerous to eat.

Stalin’s policies resulted in what is now known as the Holodomor, a Ukrainian term which loosely translates to “hunger plague.” As many as seven to 10 million died of starvation while Lysenko oversaw the country’s farms, and nightmarish stories of cannibalism soon spread across the country.

According to William deJong-Lambert, Professor of History at Bronx Community College, by 1932, “famine in the Ukrainian breadbasket was so severe that the sight of victims dropping dead on the street from hunger ceased to provoke notice.”

Many of these victims might have been saved had sound science been at work on the country’s farms. Instead, there was Trofim Lysenko.

That there weren’t more deaths may have more to do with the fact that farm bosses soon quietly ignored his ideas. 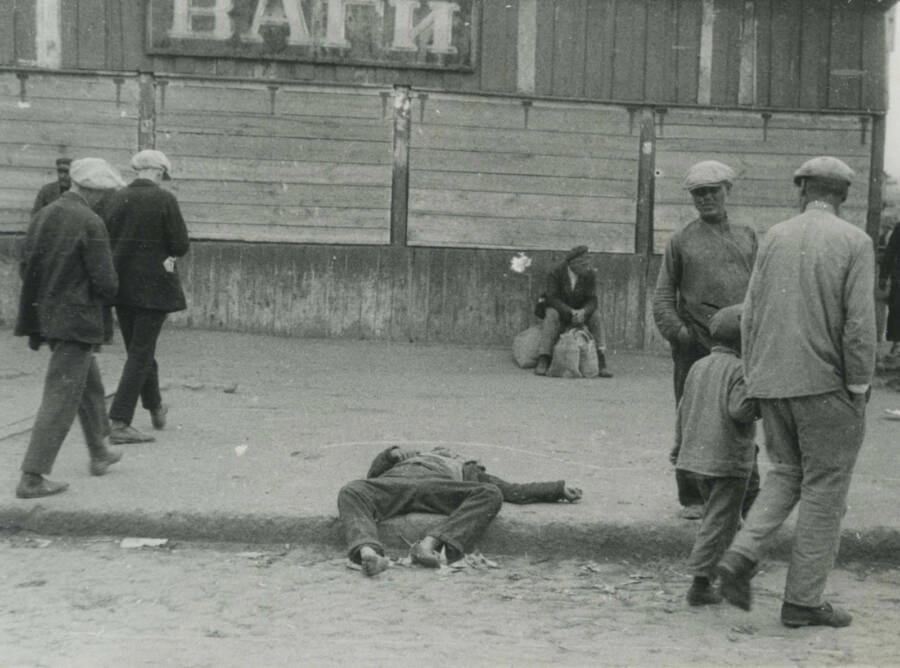 Wikimedia CommonsDeath from starvation, malnutrition, and hunger-related disease were so common by 1932 in Russia that dead bodies left in public were a common occurrence.

Even as his ideas exacerbated one of history’s most devastating famines, Lysenko’s star was rising among Soviet leaders. By 1939, he was so widely supported that after an extended struggle with geneticist Nikolai Vavilov, who debunked Lysenko’s work, Lysenko came into control of almost all of the Soviet food research.

Vavilov was subsequently arrested and imprisoned before dying of starvation in 1943. Any further scientist who dared to question Lysenkoism risked being discredited, imprisoned, or even killed. 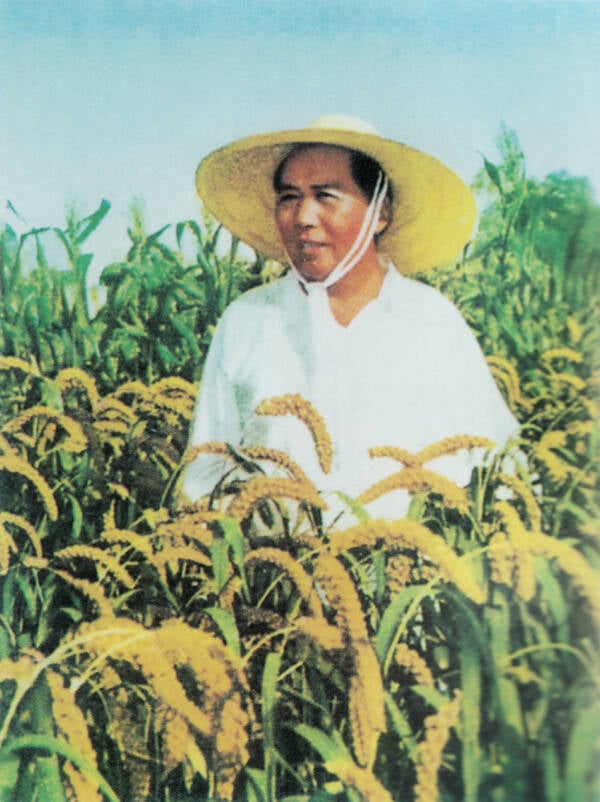 Wikimedia CommonsFor roughly a decade after the foundation of the People’s Republic of China, Mao Zedong imported Soviet advisers, books, technology, and ideas — including Lysenkoism.

In 1948, his ideas were made universal law at a party conference in a speech edited by Stalin himself. By then, Lysenko was given to making outstandingly weird assertions like wheat could be induced to produce rye or that inorganic substances could be combined to create life.

Stalin’s death in 1953 destroyed much of Lysenko’s support, as premier Nikolai Khruschev reinstated proven geneticists and began importing sounder scientific ideas from outside of the Soviet Union, where Lysenkoism enjoyed little more than universal ridicule.

However, Trofim Lysenko’s lethal beliefs hadn’t been entirely abandoned. The People’s Republic of China had been established in 1949, and Mao Zedong’s party began systematically copying everything the Soviets did — including their science.

As a part of Mao’s Great Leap Forward, an effort to jump-start every sector of China’s economy and industry, the mistakes of collectivization and Lysenkoism were mimicked nearly to the letter.

The failure of these efforts was predictable, but the scale of the destruction wrought in China surpassed that of even the Holodomor. Between 1959 and 1961, as many as 45 million Chinese people died as a result of starvation, malnutrition, illness, and injury after the country’s farms were wrecked by Lysenko’s crackpot ideas. This period of time would become known as The Great Chinese Famine. 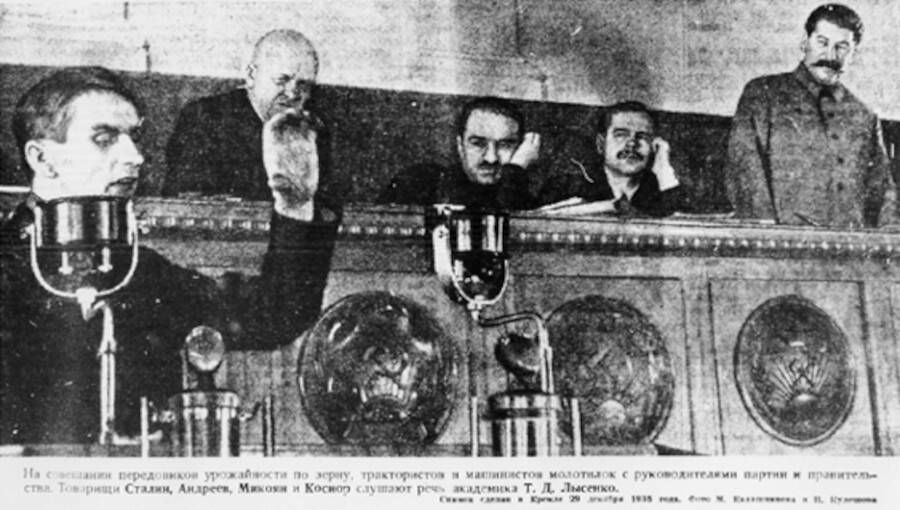 Wikimedia CommonsLysenko was a longtime favorite of Stalin, both of whom are pictured here.

Trofim Lysenko was publicly discredited in 1964 and died in obscurity at the age of 78 in 1976. For over a decade, the Soviet Union appeared to be recovering from its reckless experiment with ideological science, which had set Soviet biology back by decades. The painful lesson of many millions dead and deep scars in Soviet industry and society seemed to have been learned.

But that changed in the early 1990s. As the Soviet Union crumbled, faith in the top-down approach to science — which had been its trademark — fell with it. Meanwhile, the science of epigenetics was taking shape in the West.

Epigenetics is the study of how the physical expression of certain genes can change while the DNA sequence behind it might not. Essentially, epigenetics posits that it is actually possible for offspring to inherit certain traits that a parent developed while they were alive.

On the surface, this might seem to support Lysenkoism, but most geneticists would insist that the similarities are only superficial and that epigenetics may not prove the validity of Lysenkoism.

Nonetheless, many citizens of the new Russian Federation felt that the rise of epigenetics delivered eleventh-hour vindication for Lysenko’s half-baked quackery. Once-serious publications and numerous public figures alike have since taken up the fight for Lysenkoism once more while conveniently ignoring the tragic consequences of it.

Nostalgia for the Soviet Union is pervasive in many parts of the dismantled empire and with it comes admiration for ideas and figures that have long since been revealed to be mistaken, ridiculous, or simply dangerous. Sadly, Trofim Lysenko appears to be one such figure.

After learning about the tragic consequences of Trofim Lysenko’s faulty research, take a closer look at its catastrophic effects in these heartbreaking images of the Holodomor. Then, find out more about the Nazino catastrophe, in which thousands of Stalin’s victims were left to die a slow death in the wild.