While remastering images taken during the 1971 mission to the Moon, a golf ball that Alan Shepard launched into space was found 40 yards from where he'd hit it. 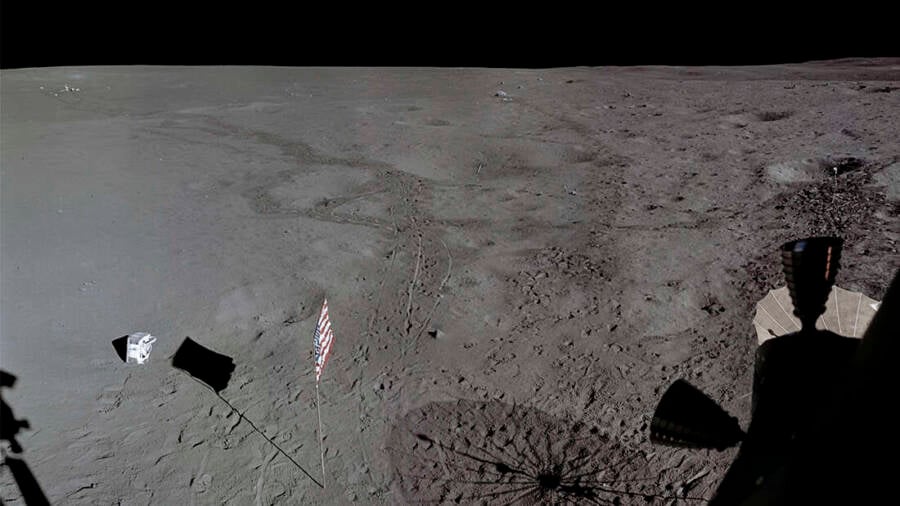 When Apollo 14 landed on the moon on Feb. 6, 1971, humankind had already been there several times, but Commander Alan Shepard nonetheless managed to accomplish the unprecedented — by teeing off just outside the lunar lander.

Though it took Shepard a minute to get the hang of it, he eventually sent his second ball flying for what he believed was “miles and miles and miles.” Now, a NASA digital image restorer thinks he’s relocated one of those balls, and as it turns out, it didn’t go for miles.

“We can now fairly accurately determine that ball number one traveled 24 yards,” he wrote for the US Golfer’s Association, “and ball number two traveled 40 yards.”

Professional estimates originally determined that Shepard’s swing sent the ball flying for 200 yards before landing. “We used to say it was the longest show in the history of the world because it hasn’t come down yet,” said renowned British golf instructor Butch Harmon.

But while the ball may not have gone as far as was once believed, the fact that Shepard could even make contact with it when the Moon’s gravity is one-sixth of the Earth’s is a feat all its own.

“The fact that Shepard even made contact and got the ball airborne is extremely impressive,” said Saunders. “I would challenge any club golfer to go to their local course and try to hit a six-iron, one-handed, with a one-quarter swing out of an unrated bunker. Then imagine being fully suited, helmeted, and wearing thick gloves.”

This is not to mention that Shepard wasn’t even using a conventional club, but one he fashioned out of a sample-collector used on the mission. 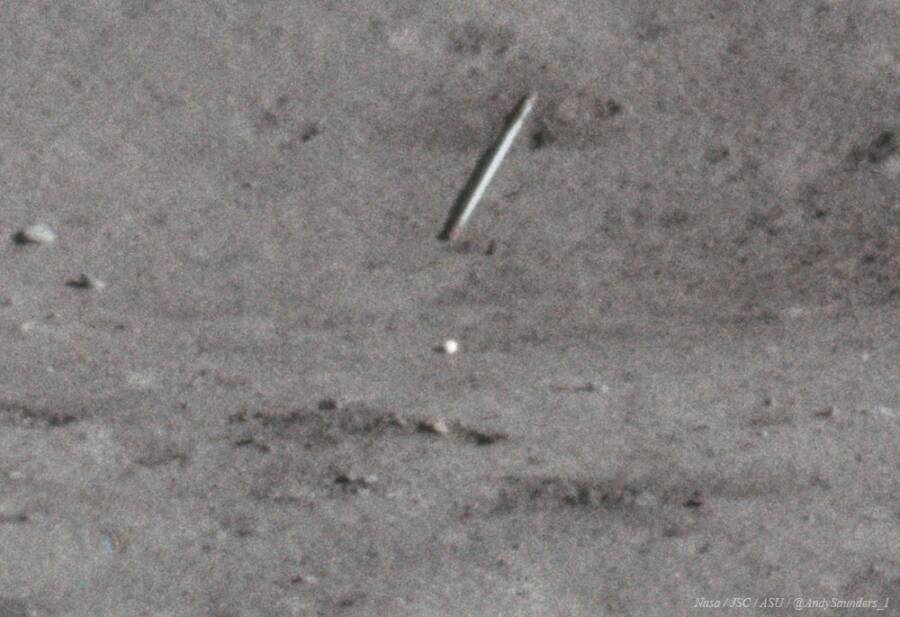 NASAThe golf ball is located beneath the javelin-type object in the center of this image.

Shepard revealed in 1998 that NASA was not on board with his stunt at first. He reportedly asked Director Bob Gilruth of the Manned Spaceflight Center if he could whack some golf balls at the end of the mission, but his immediate reply was, “Absolutely no way.” Gilruth worried doing so would trivialize their mission.

“I will not be so frivolous,” Shepard told Gilruth. “I want to wait until the very end of the mission, stand in front of the television camera, whack these golf balls with this makeshift club, fold it up, stick it in my pocket, climb up the ladder, and close the door, and we’ve gone.”

In video footage of the mission, Shepard can be heard letting viewers back on Earth in on his stunt. “Houston, you might recognize what I have in my hand as the contingency sample return; it just so happens that to have a genuine six-iron on the bottom of it. In my left hand, I have a little white pellet that’s familiar to millions of Americans.”

Shepard brought two balls with him. The first ball he only skimmed, and it was easily recovered by colleague Edgar Mitchell in a nearby crater. By the second ball, Shepard had gotten the hang of it and sent it flying. That ball then remained missing for half a century. 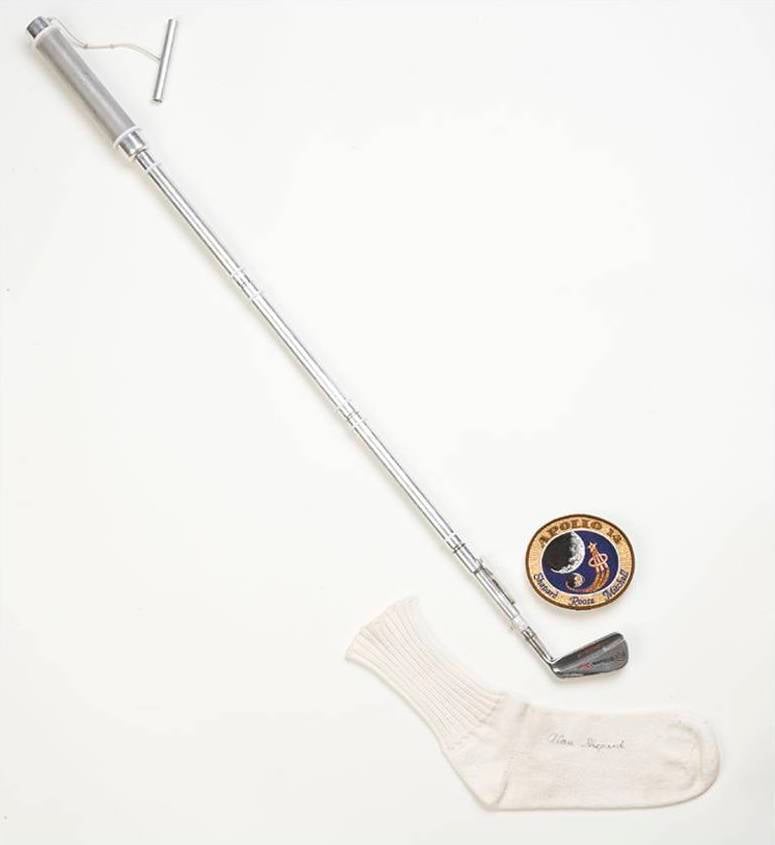 USGA MuseumShepard donated the club to the USGA Museum in New Jersey in 1974.

Apollo 14 was the third of six NASA missions to land men on the moon. Its objective was to assess the Moon’s internal structure and measure its atmospheric composition.

Prior to his status as the only human being to ever play golf on the moon, Shepard broke another record as the first American in space. He was one of the seven astronauts aboard NASA’s 1961 Mercury Mission before an inner ear issue saw him benched for several years. Apollo 14 made him the fifth man on the moon.

Shepard donated the club to the USGA Museum in New Jersey in 1974 during the U.S. Open ceremony — which resulted in a stern phone call from NASA reminding him “that’s government property.” Nonetheless, the deed was done — and the club remains on display in New Jersey to this day.

“He might have put golf on the Moon map,” said pro golfer Jack Nicklaus. “I thought it was unique for the game of golf that Shepard thought so much about the game that he would take a golf club to the moon and hit a shot.”

After learning about how NASA astronaut Alan Shepard’s golf ball was discovered on the moon, take a look at these 25 vintage photos of NASA’s most important moments. Then, learn 18 Apollo 11 facts you’ve never heard before.