The Unbelievable True Story Of Eddie Chapman, The British Criminal-Turned-Spy Who Fooled The Nazis

After offering his criminal services to the Nazis in exchange for his freedom from jail, Eddie Chapman turned himself in to the British and became "Agent Zigzag." 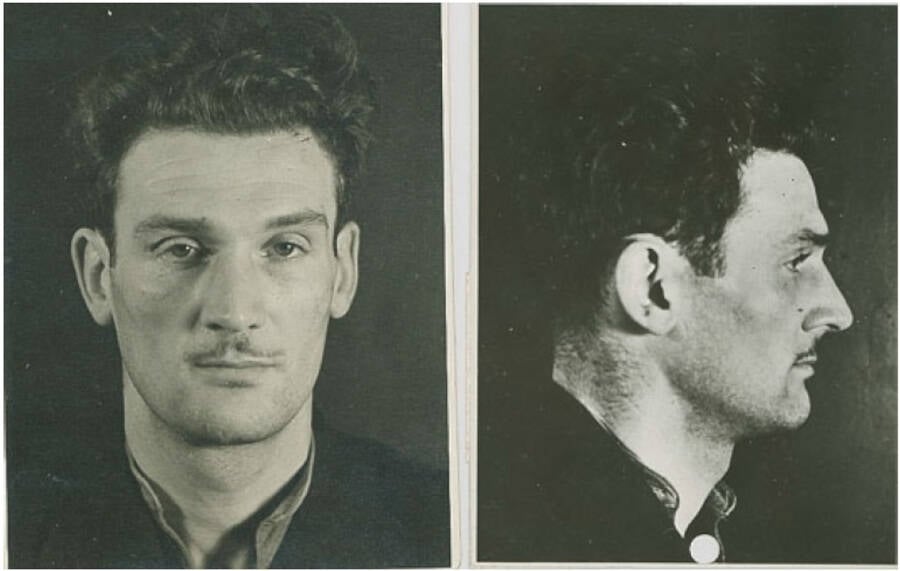 Wikimedia CommonsEdward Arnold Chapman was a professional criminal, an expert safecracker, and one of Britain’s most valuable double agents in the Second World War.

In the dark, early days of World War II, as the Luftwaffe hovered in British skies and U-boats prowled the English Channel, paranoid Britons saw German spies around every corner. What no one knew was that Germany’s star spy — sent to disrupt Britain and sabotage the war against fascism — wasn’t a dedicated Nazi at all. In fact, he wasn’t even German.

His name was Eddie Chapman.

Far from being an Aryan super-saboteur, Chapman was an accomplished safecracker and professional crook from Northern England. Unbeknownst to all but the most secretive agencies in the country, he was also possibly the most daring and successful double agent in the world at the time.

This is the true story of “Agent Zigzag,” the spy who fooled the Nazis — and for nothing more than his own sense of adventure. 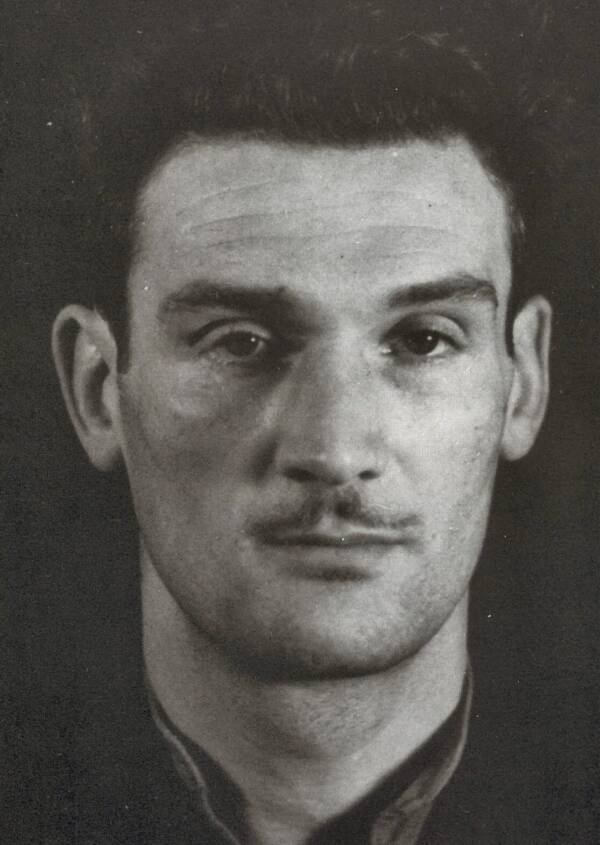 Wikimedia CommonsAfter going AWOL with a woman, Eddie Chapman was dishonorably discharged from the British military.

Eddie Chapman was born to a military family on Nov. 16, 1914, and tried his hand at the military himself when he turned 17. But after just nine months while posted at the Tower of London, he ran off with a woman to Soho.

Naturally, the military caught up to him and imprisoned him. Once he was released — and dishonorably discharged — he returned to Soho where he picked up a number of odd jobs. While there, he dabbled in gambling and petty crime, he had a few run-ins with the law, and he eventually formed his own criminal outfit known as the “Jelly Gang.”

In 1939, following a string of robberies all over Great Britain for which he was wanted, Edward Arnold Chapman escaped to the Channel Island of Jersey, just a few miles off the coast of France. There, he’d hoped to escape notice and perhaps continue his criminal career. 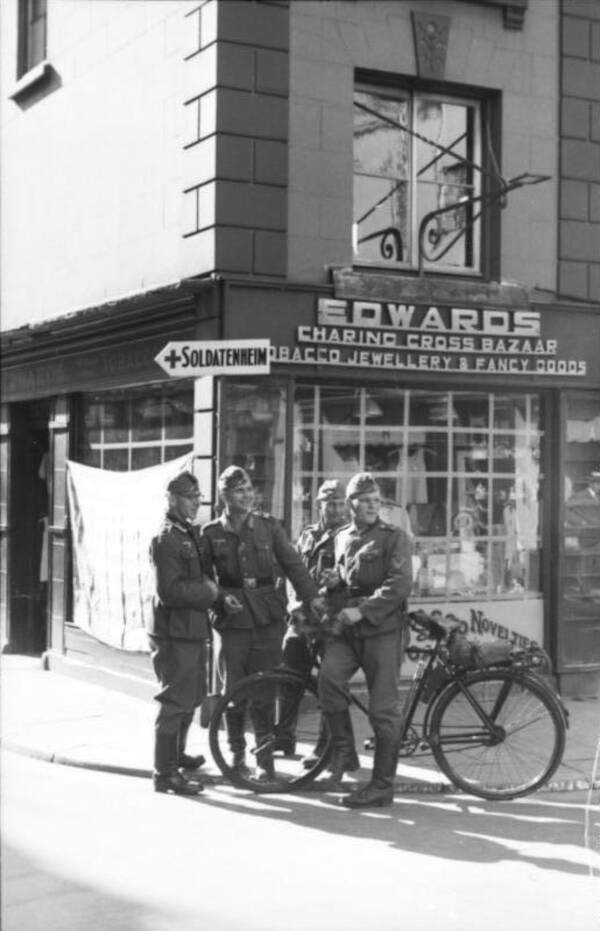 Bundesarchiv/Wikimedia CommonsWhen German troops invaded the Channel Islands in 1940, where Chapman was imprisoned on Jersey, he knew he had to get out by any means possible — including joining up with the enemy.

Unfortunately, Jersey’s police weren’t quite as clueless as he’d hoped, and it wasn’t long before plain-clothes detectives found him dining with his girlfriend in a hotel. He reportedly tried to flee through a dining room window, but was unsuccessful — and was sentenced to two years in prison.

This sentence was later extended when Chapman stole someone else’s clothes while imprisoned and attempted to escape again.

Meanwhile, as Eddie Chapman faced the long arm of the law in the summer of 1940, the German Wehrmacht invaded the Channel Islands, making them the only British territories to be occupied by the Axis powers during the war.

With little hope of either escape or furthering his criminal ambitions, Chapman made a decision that would permanently alter the course of his life: he was going to join German intelligence as a spy.

The Truant Volunteers For The Nazis 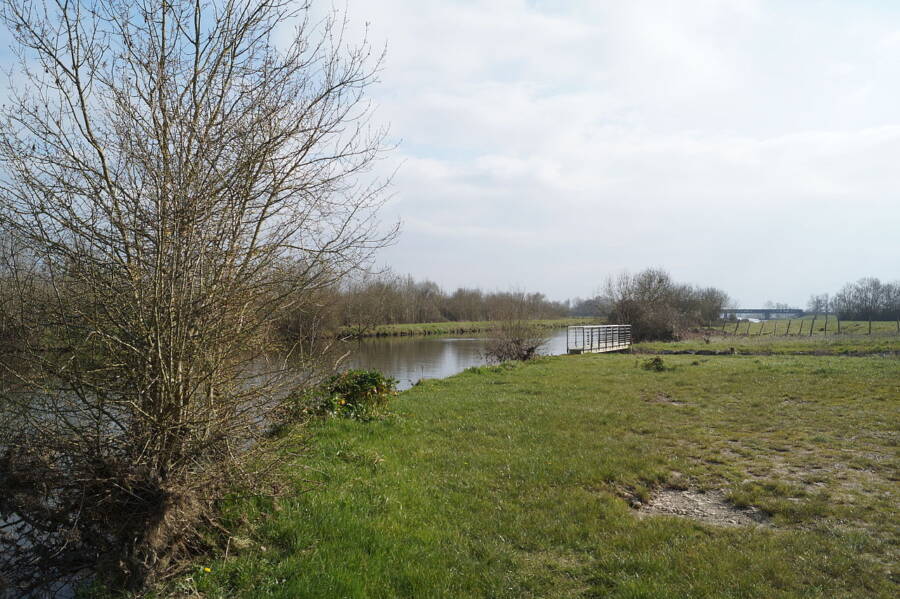 Wikimedia CommonsIn the rustic commune of La Bretonnière-la-Claye, outside of the French city of Nantes, Chapman received training in explosives, radio communications, sabotage, firearms, and disguise.

While in Jersey’s decrepit jail, Chapman teamed up with Anthony Faramus, a hairdresser he’d met in prison and with whom he’d run a barbershop in the capital of St. Helier, and hatched a bizarre plan to escape jail.

“If I could work a bluff with the Germans,” Chapman later wrote, “I could probably be sent over to Britain.”

The two men wrote a letter to the German commandant on the island. In it, they extolled their criminal credentials and virtues, boasted about their abilities with language, and offered to immediately get to work as a spy and saboteur on English soil.

The letter was initially met with silence.

Then, one night, Chapman and Faramus were roused from bed by Gestapo officers, who unceremoniously bundled them into a boat headed for mainland England. As it turned out, their letter hadn’t been ignored at all. Chapman had been selected for training by Captain Stephan von Gröning, an aristocratic intelligence officer who saw unmatched potential in the English thief.

And to ensure Chapman’s obedience, von Gröning threw Faramus into the Buchenwald concentration camp where he was promptly forgotten for the remainder of the war.

After He Surrenders To The British, Chapman Becomes A Double Agent 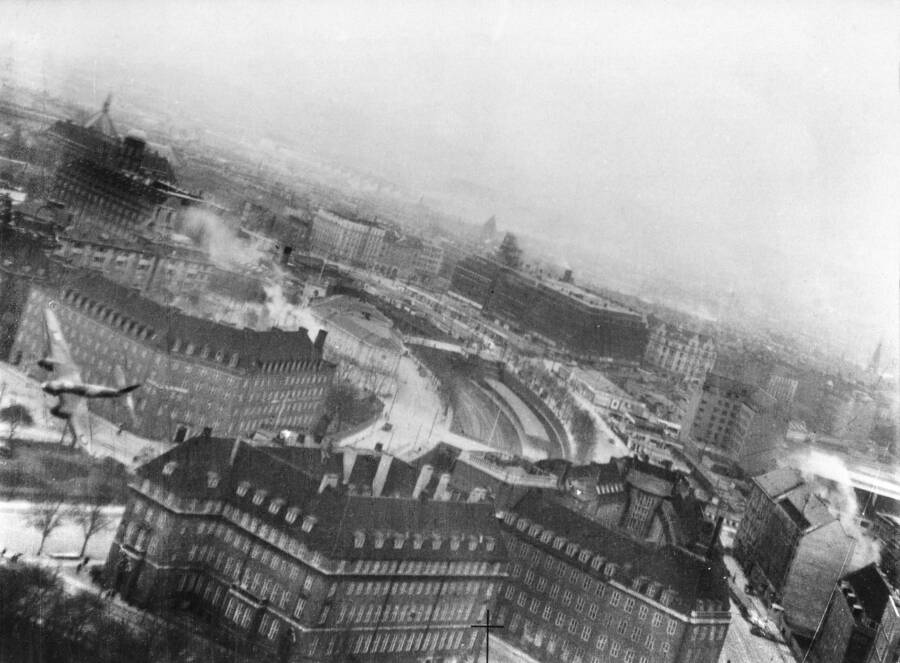 National Museum of Denmark/Wikimedia CommonsThe de Havilland Mosquito, nicknamed “the Wooden Wonder,” was an all-wooden plane with no guns and yet it managed to successfully destroy Gestapo headquarters in Copenhagen and Oslo, humiliating Hermann Göring.

Throughout 1942, the Nazis trained Chapman in explosives, wireless radio communications, and parachute jumping. He became fluent in French and proficient in German, and by the end of the year, he was von Gröning’s proudest achievement and the envy of every secret police chief and spymaster in occupied Europe. He was a spy par excellence.

And von Gröning had a special project saved for Chapman: an effort dear to the senior-most members of Hitler’s inner circle.

These embarrassing victories had infuriated Reichsmarschall Hermann Göring, head of the Luftwaffe. To mollify the Reichsmarschall and gain an edge in the war in the skies, von Gröning planned to send Chapman to England where he was to blow up the de Havilland factory. 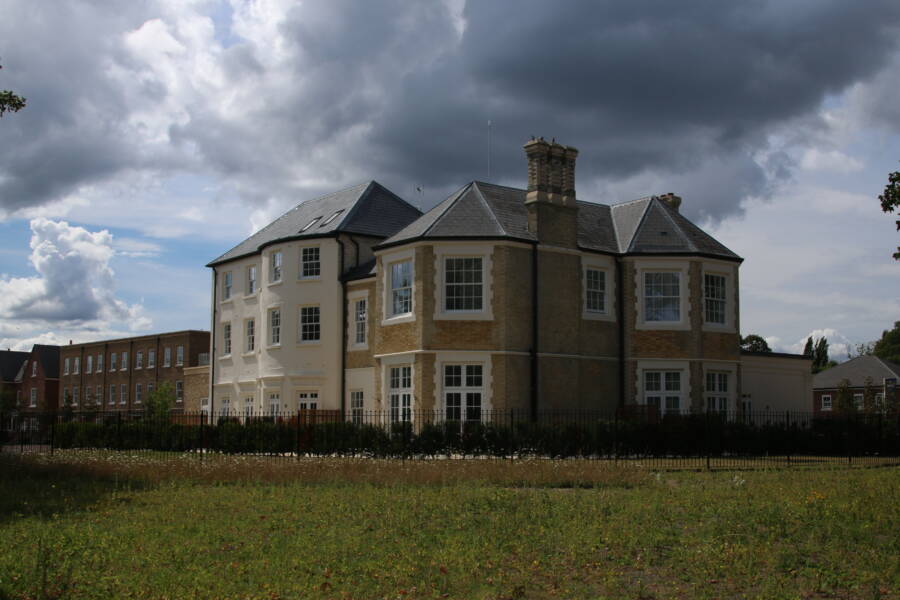 Wikimedia CommonsLatchmere House, in the suburbs of West London, was the site of Camp 020, where a wide range of fascists, criminals, and potential double agents, including Eddie Chapman, were held during World War II.

In December 1942, Chapman landed in a muddy field in Cambridgeshire and did something no one in either the British or German intelligence services had expected: he surrendered.

Chapman had never intended to carry out his mission for the Nazis. Instead, he had a sense of loyalty to himself first and, he found, to Britain in a distant second.

Rapidly taken into custody by MI5, the British counter-intelligence agency, Chapman was interrogated and studied for days before his captors decided he could be trusted. MI5 determined that his motives were “hatred for the Hun coupled with a sense of adventure. There is no woman in the case and no bargain for rehabilitation. He is possessed of courage and nerve.”

From the start of his work with MI5, Chapman showed his new handlers that they’d struck proverbial gold. Not only was one of Germany’s finest agents in their hands, but he was eager to cooperate and subvert the Abwehr‘s efforts in Britain and abroad, beginning with fooling them into thinking the de Havilland factory was destroyed.

British agents made the factory look as though it had been utterly destroyed and broadcast fake reports to complete the illusion. When German reconnaissance planes brought back photos of the apparent wreckage, the operation was deemed a complete success on both sides of the Channel.

Chapman’s MI5 handlers were eager to make the most of this victory and arranged to have him sent back to von Grönig aboard The City of Lancaster, a merchant vessel traveling to Lisbon, Portugal, which was neutral in World War II.

Along the way, he obtained two bombs from his German superiors, ostensibly to destroy the ship, but which he promptly passed along to MI5 for study. 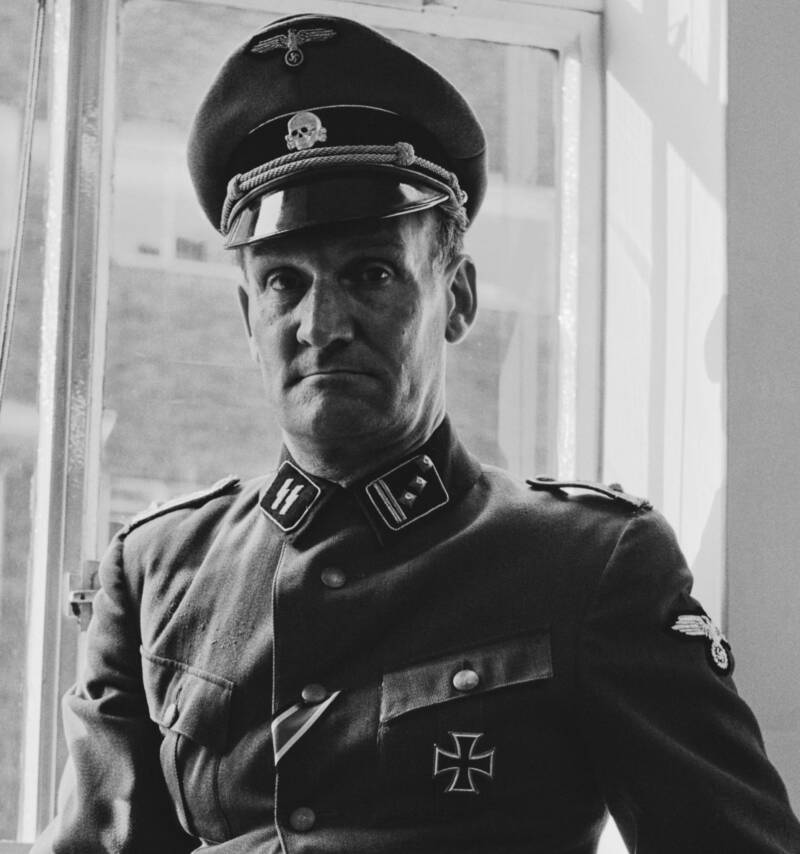 Getty ImagesChapman was briefly drafted into the German Army in 1942, when Hitler decided to disregard the treaty between Nazi Germany and Vichy France and fully occupy the collaborationist state.

By now, Eddie Chapman was so valued that the Abwehr sent him to Nazi-occupied Norway and put him to work training the next generation of Nazi spies. But he would never be allowed to settle in one place for long.

By June 1944, he was on his way back to England to report on the United States military forces, the use of SONAR, and to report on the effects of the V-1 and V-2 rockets shrieking into British skies as a desperate last-ditch attempt to inflict cruel casualties on the Allies.

Unbeknownst to him, the July 20 plot to assassinate Hitler had taken place just weeks after he landed in England again, and the Führer quickly destroyed the Abwehr. Left without an employer, Chapman rode out the remainder of the war sending false information and wilfully misrepresenting the effectiveness of the German rocket program.

As one of Germany’s star spies, Chapman was awarded 110,000 Reichsmarks or about $343,000 today, and the Iron Cross, Second Class, becoming the only British citizen ever to receive the medal.

Despite his numerous successes and unparalleled value, MI5 was tired of a man whom they saw, ultimately, as a liability. Chapman was sworn to secrecy and officially thrown out of the secret service on Nov. 28, 1944. Agent Zigzag was no more.

Chapman Returns To A Life Of Crime

Eddie Chapman’s release from MI5 presented him with a perfect chance to return to his criminal career.

Britain, at this point in history, was sadly a crook’s paradise, with endless opportunities for black marketeering, theft, forgery, and all sorts of shifty deals.

And the criminal formerly known as Agent Zigzag had an unparalleled immunity: having carried out the most daring espionage missions of the war, the British government would never risk his falling into the hands of any police officers or newspaper reporters who might induce him to spill his secrets.

With Abwehr‘s money in one hand and MI5’s free pass in the other, Chapman was free to reach new criminal heights.

But for all the secrecy surrounding the Zigzag case and the Double Cross System, it was only a matter of time before the truth got out. Chapman was the first to break ranks and published his story in France before attempting to do the same in the British tabloid News of the World.

Each time, fines and objections frustrated his efforts — yet, he finally released his memoirs in 1953.

The remainder of his life was quiet in comparison to his shady career and wartime exploits. He married Betty Farmer, the girlfriend he’d deserted on Jersey island, and had a daughter, establishing a quiet life as a businessman and antiques dealer in later years. Edward Chapman died of heart failure at age 83 on Dec. 11, 1977.

Anthony Faramus emerged from the hell of the Mauthausen-Gusen concentration camp missing a lung and seven ribs, and later became a butler for Hollywood star Cary Grant.

In 1960, when asked if he missed his former life of crime, daring, and espionage, Chapman simply replied: “I do a bit. I’ve no regrets. No conscience about anything I’ve done. I like to think I was an honest villain.”

Now that you’ve learned about the wild true life of Agent Zigzag, learn about the bold efforts of Juan Pujol García, alias Agent Garbo, the freelance Spanish spy who fed Nazi secrets to Britain. Then, read about the exploits of Dusko Popov, the real-life James Bond who inspired Ian Fleming.