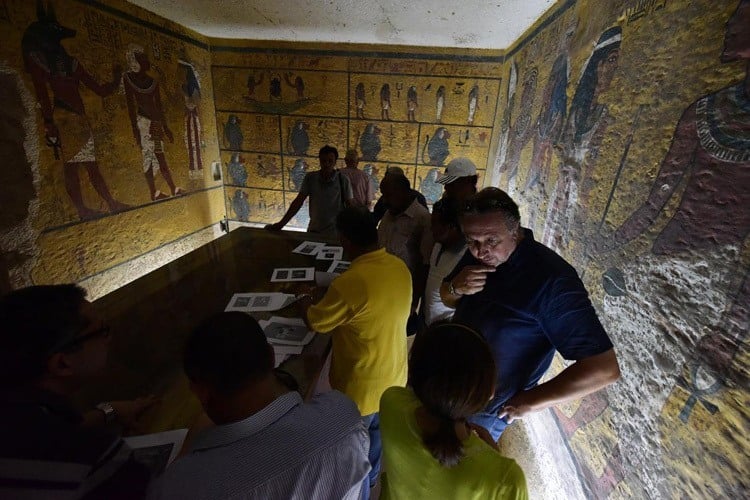 Inside the tomb where Nicholas Reeves believes there are hidden chambers. Image Source: National Geographic/Brando Quilici

Move over, Harry — there’s quite possibly a new “chamber of secrets” in town, and in legendary Egyptian boy-king Tutankhamun’s tomb. British archaeologist and Egyptologist Nicholas Reeves has recently put forth a groundbreaking theory that the famous burial site — discovered by Howard Carter 93 years ago this November — contains not one, but two hidden chambers. Even more interestingly, he thinks Queen Nefertiti, whose burial site remains a mystery, is inside one of them.

Reeves bases his theory on on high-resolution scans of the tomb’s walls, and history. Indeed, three thousand years ago, intruders discovered Pharaoh Horemheb’s sarcophagus after they barged through a false wall adorned with a painted scene — walls with similar decorations and architectural features to those in Tutankhamun’s tomb. 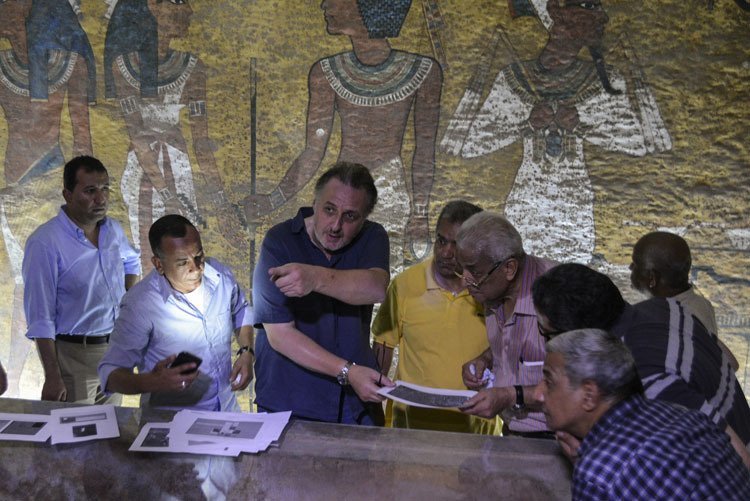 Reeves surveying the interior of the tomb. Image Source: Neurope

Details that support Reeves’ hidden chamber theory keep piling up. “The most obvious [evidence] is a carved line that crosses the stone ceiling of Tutankhamun’s burial chamber,” National Geographic‘s Peter Hessler wrote. “Lines like this are made when workers use chisels to fashion the right angle between ceiling and wall, and such a mark runs the length of the antechamber.

“But as the antechamber opens into the burial room,” Hessler adds, “this chiseled line continues straight across the middle of the ceiling. There’s no logical reason for it to be there, unless the burial chamber was originally part of a longer corridor that subsequently was widened in one section.” 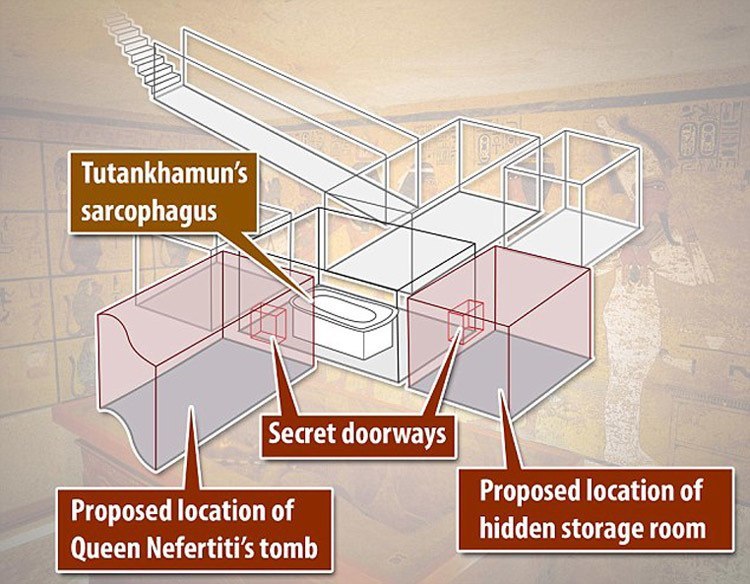 A map of the tomb’s interior. Image Source: Daily Mail

Reeves also believes that the painting on Tut’s chamber wall has been interpreted poorly. In Reeves’ eyes, the painting does not show Tut receiving the “opening of the mouth” death ritual, as commonly thought, but Nefertiti. This supports his hypothesis that Tut’s tomb was originally planned and constructed for the powerful Nefertiti — but since the young king unexpectedly died first, at age 19, he was buried there instead. This likewise lends authority to Reeves’ thought that the most famous artifact associated with Tut – the gold funeral mask — was actually designed for the iconic queen. After all, it contains earring holes, which male pharaohs did not wear. 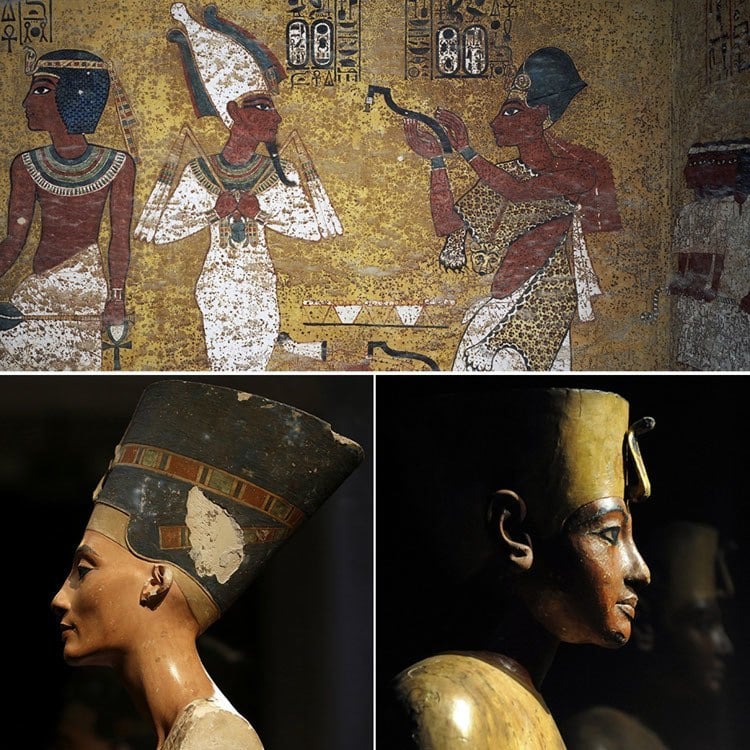 Reeves plans to use radar and thermal imaging technology to get a better grasp of what’s behind those walls this November, and results should come in quickly. The archaeologist suspects that one chamber may only be a storage area, but hopes to find a sarcophagus in the other.

Just who could be found mummified behind the north wall of King Tut’s tomb is open to speculation, and in fact that speculation has gotten Reeves in trouble with some members of the archaeological community. “Talk of the doorways would have been fine,” said Dr. Aidan Dodson, an Egyptologist at the University of Bristol, but it was “speculative” to add Nefertiti, The Independent reported.

Outside of Nefertiti, others hypothesize that the chamber could be the burial site of pharaoh Smenkhkare or queen Meritaton, the sister of Tutankhamun. (In another plot twist, Reeves actually believes that Tut’s predecessor, Smenkhkare; another pharaoh named Neferneferuaten, and Nefertiti were all the same person. The queen known as Nefertiti disappeared, and Reeves notes the possibility of her taking different names to become pharaoh alongside her husband, Akhenaten, Tut’s father.) 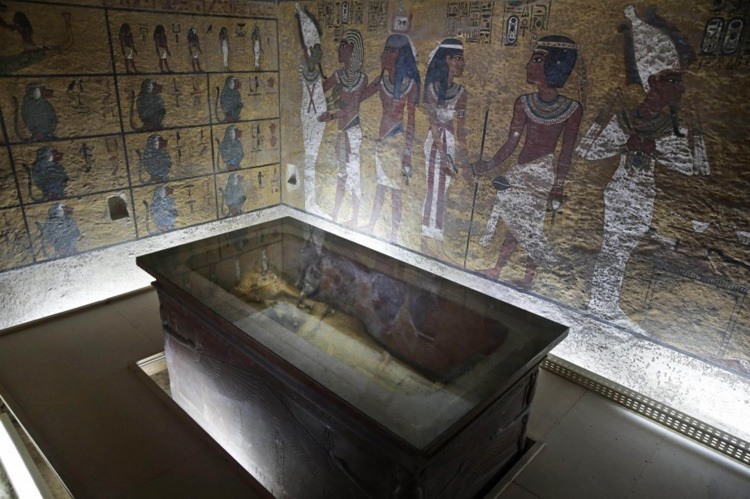 Only time and thermal imaging equipment can take these chambers from a place of hypothesis to history, but the prospect of finding a sarcophagus is one that Reeves — and Egypt’s flagging tourism industry — would find thrilling. “We could be faced for the first time in recent history with the intact burial of an Egyptian pharaoh in the Valley of the Kings. Goodness knows what that will tell us.”