"I really want to know what species exactly was eating my Twinkies." 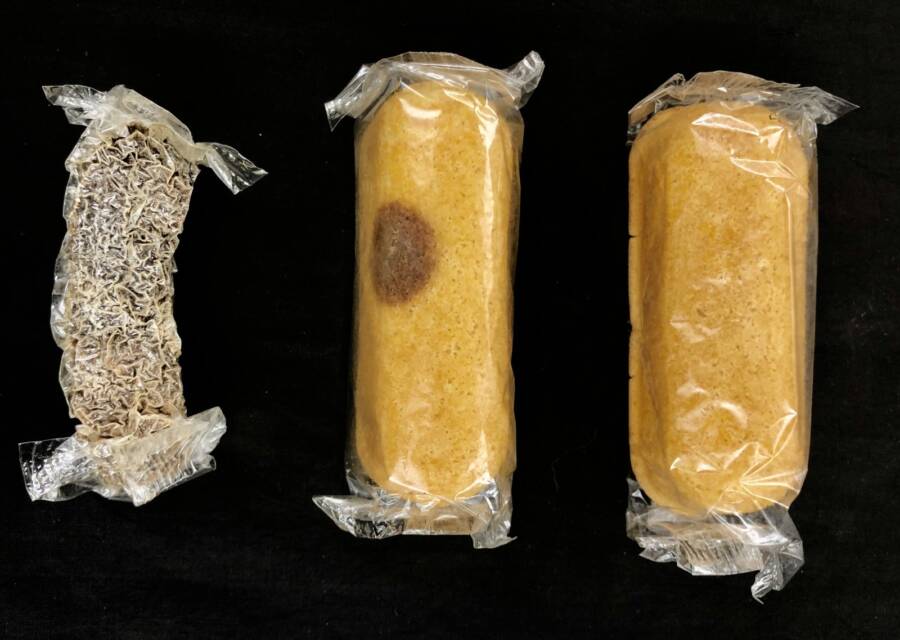 The mystery fungus that mummified an old Twinkie has been the talk of Twitter, and it all started with a quarantine snack gone wrong.

Hit with a sudden craving for sweets, Colin Purrington recalled an eight-year-old box of Twinkies he had stashed in his basement. The first Twinkie looked ok, but after taking one disgusting bite, Purrington knew something was amiss. “It tasted like old sock. Not that I’ve ever eaten old sock.”

So, he immediately shipped the others off for analysis to find out what kind of fungus had been munching on his cakes.

According to IFL Science, Purrington had stocked up on the cream-filled cakes in 2012. Concerned Hostess would shut down production in wake of its bankruptcy filing, he made sure to keep a stash at home. After all, Twinkies can survive forever — or so Purrington thought.

The curious Pennsylvanian chronicled the entire saga on Twitter, including how one of the Twinkies smelled like “rotting gingko fruit” and made him gag upon chewing. 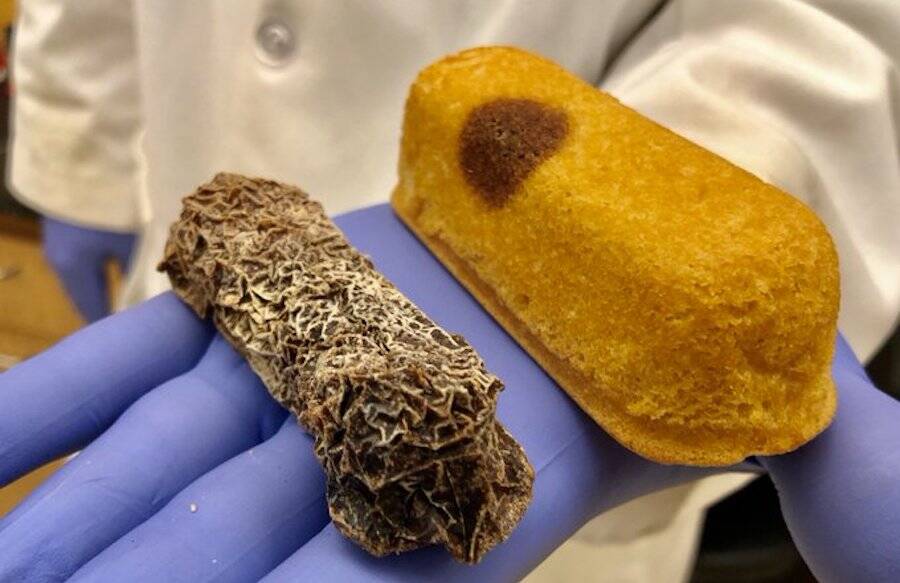 Matt KassonThe fungus growing on the Twinkie on the right was eventually identified, while the mummified Twinkie has yet to yield results.

While a snack with a listed shelf life of 45 days tasting bad eight years later isn’t news, the state of some of the other Twinkies certainly is.

One was hosting an organism he couldn’t identify, while another had “shriveled into a small log” with mysterious spots on the wrapper. It only got stranger when Matt Kasson, professor of forest pathology and mycology at West Virginia University, lent a hand — and Operation #MoldyTwinkie began.

Kasson and Lovett, who both study fungi at the same university, were ideal candidates to commandeer Purrington’s investigation. The two academics had previously tested how well mold can grow in Peeps, the ubiquitous American Easter treat, and found them highly resilient to fungi.

“In a way, they are kind of like an extreme environment, right?” Kasson told NPR. “The food industry has crafted the ability to make foods that have a long shelf life.”

Kasson clarified that fungi are virtually everywhere and have a remarkable set of chemical tools to break down all sorts of substances. Not even jet fuel is exempt from hosting fungi, for example. The pair was convinced these Twinkies suffered the same fate — and got to work. 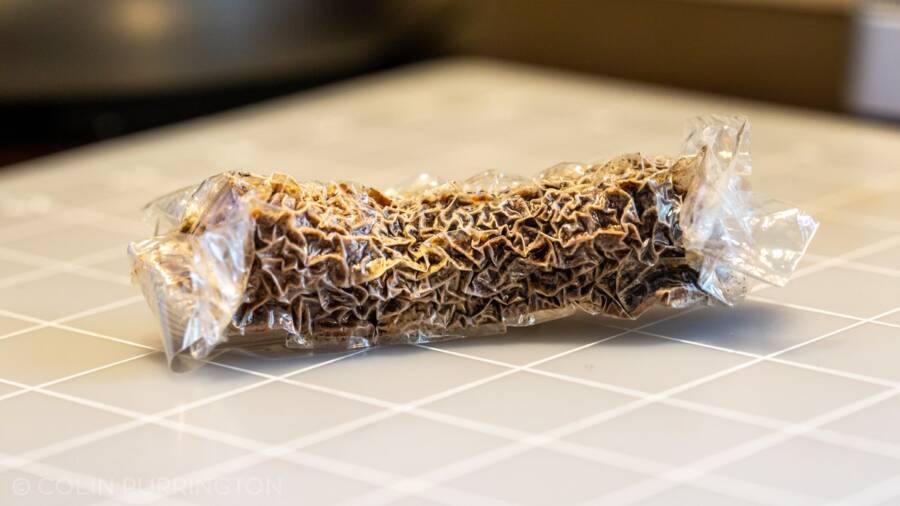 Colin PurringtonKasson and Lovett said they’ll keep trying to coax something back to life from the mummified Twinkie, which has yet to grow any fungi in the lab.

“Science is a collaborative sport,” said Purrington. “If someone can take this and figure out what was actually growing, I’m all in. I really want to know what species exactly was eating my Twinkies.”

Kasson and Lovett immediately noticed that the wrapping on the mummified Twinkie was sucked inward. This suggested the fungus had entered before the package was even sealed, and used more oxygen than it was releasing while it feasted on the snack.

“You end up with a vacuum,” said Lovett. “And very well that vacuum may have halted the fungus’s ability to continue to grow. We just have the snapshot of what we were sent, but who knows if this process occurred five years ago and he just only noticed it now.”

The fungi experts were delighted to find that Operation #MoldyTwinkie didn’t begin with an expected stench. “I thought the smell would possibly kill one of us, but because of the mummification there really was no smell at all,” said Lovett, “which was a really pleasant surprise.”

With a bone marrow autopsy tool in hand, the duo drilled into the mummified Twinkie and were shocked to find the interior still creamy. Lovett proffered that “the fungus was more interested in the cake on the outside than the filling.”

The severely colonized cake was quite challenging to sample. Thanks to a bone marrow biopsy tool, we made quick work of it! pic.twitter.com/IYik3iWPvb

At this stage, the pair put their Twinkie samples in numerous lab dishes with nutrients commonly used to grow fungi. Their scientific control group was a chunk of “asymptomatic” Twinkie from the same box, which hadn’t been taken over by fungi yet.

The Twinkie marked with just one blemish of mold yielded a fungal species called Cladosporum, which Kasson called “one of the most common, airborne, indoor molds worldwide.” As it stands, however, no fungi have grown yet from samples taken out of the mummified Twinkie.

“It may be that we don’t have any living spores despite this wonderful, rare event that we’ve witnessed,” said Lovett. “Spores certainly die, and depending on the fungus, they can die very quickly.” 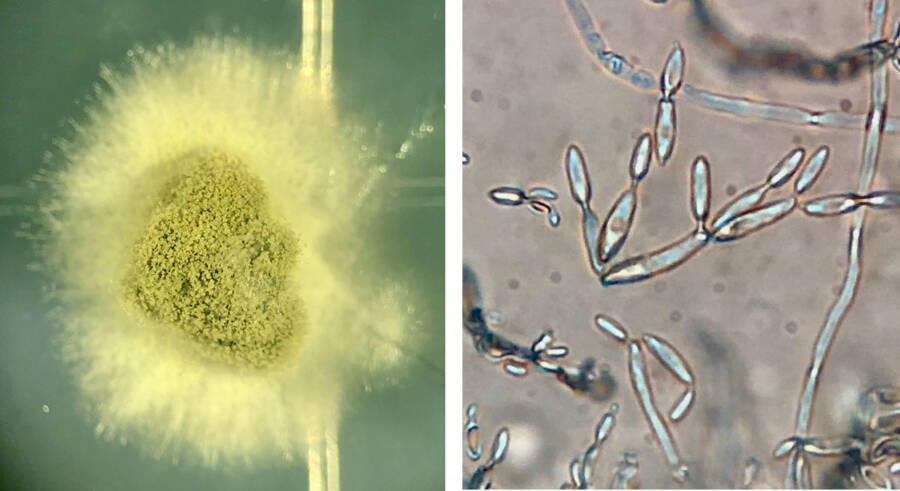 Matt KassonCladosporium colonies found in the Twinkie that retained its cream filling (left), and the same viewed at 20 times magnification using a compound microscope (right).

They’re not giving up yet, though, and will keep trying to coax something back to life from the Twinkie mummy. In the end, one brave bite by a bored and quarantined Pennsylvanian led to one of the most enthralling Twitter threads of 2020. As for the broad appeal, Kasson and Lovett have theories.

“When those memories are tainted by a visual reality like the Twinkie experiment, we are kind of caught off guard,” said Kasson. “We’re like, no, that’s a symbol of my childhood! You can’t take that from me, too.”

“We’re living in a time where we’re all really grappling with our mortality,” added Lovett. “Eventually, all of us are food for fungi. Seeing that is sort of facing the reality of our mortality and our destination.”

After learning about the unknown fungus found growing on eight-year-old Twinkies, read about five accidental discoveries that changed the world. Then, learn about the radiation-eating fungus in Chernobyl.