The Proteus is expected to house up to 12 people with facilities that range from research labs to a built-in greenhouse — all under the ocean. 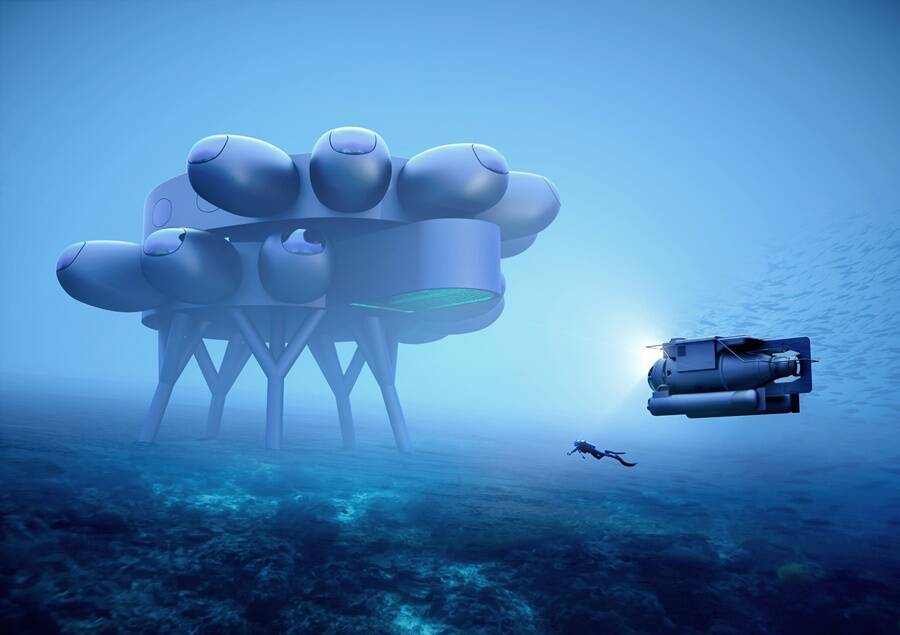 Yves Behar/Fuse ProjectDesigns for a new underwater habitat named Proteus in the Caribbean Sea were revealed by architect Yves Behar.

Meant to further mankind’s exploration of our oceans, the designs for an upcoming research hub set to be built on the floor of the Caribbean Sea were just released. Swiss architect Yves Behar described the structure as “the ocean’s equivalent to the International Space Station.”

Judging by the newly released designs, the research station does look extraterrestrial with two disc-like shapes overlapping on top of each other and little pods sticking out of its structure.

According to architectural outlet de zeen, Behar designed the underwater research center for an ocean conservation foundation under the direction of French conservationist Fabien Cousteau whose family has a long tradition of sea exploration.

The Proteus, named after the Greek sea god and keeper of knowledge, would provide a comfortable, pressurized environment for researchers to collaborate on important studies related to marine life at 60 feet below the ocean’s surface. 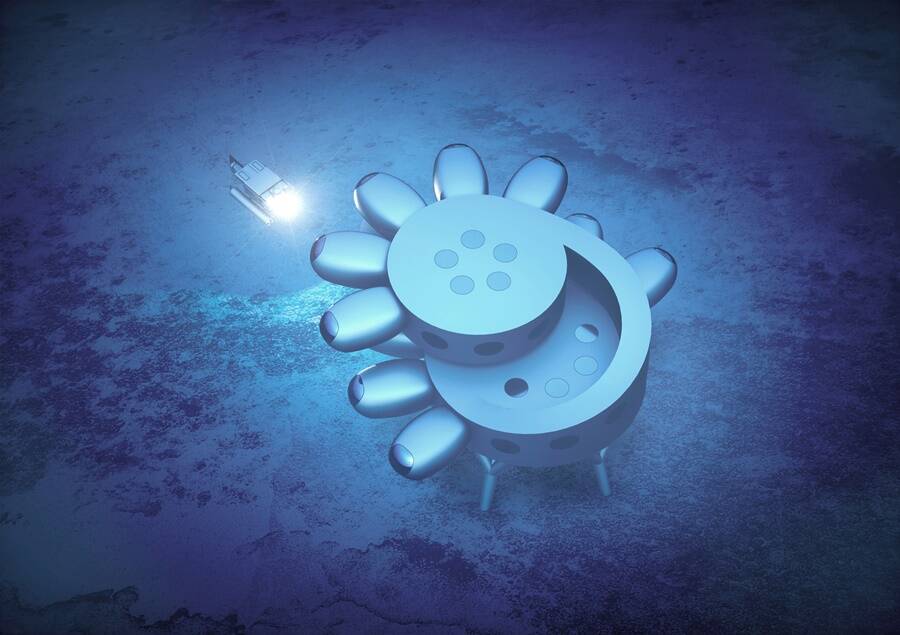 Yves Behar/Fuse ProjectThe Proteus will have 4,000-square-feet of space, providing a comfortable pressurized environment in the ocean.

“The research station will enable the discovery of new species of marine life, create a better understanding of how climate change affects the ocean, and allow for the testing of advanced technologies for green power, aquaculture, and robotic exploration,” Behar said.

Proteus will have enough space to house 12 researchers and will also feature a medical bay, video studio, and hydroponic greenhouse where scientists can grow their own produce. The research station is planned to undergo construction near Curaçao, a Dutch island territory located in the Caribbean.

It’s an ambitious project that reimagines how underwater scientific habitats could be improved. Behar emphasized that the focus of the design was on providing researchers with an environment that prioritizes and maintains their well-being while they are couped up in an isolated space. 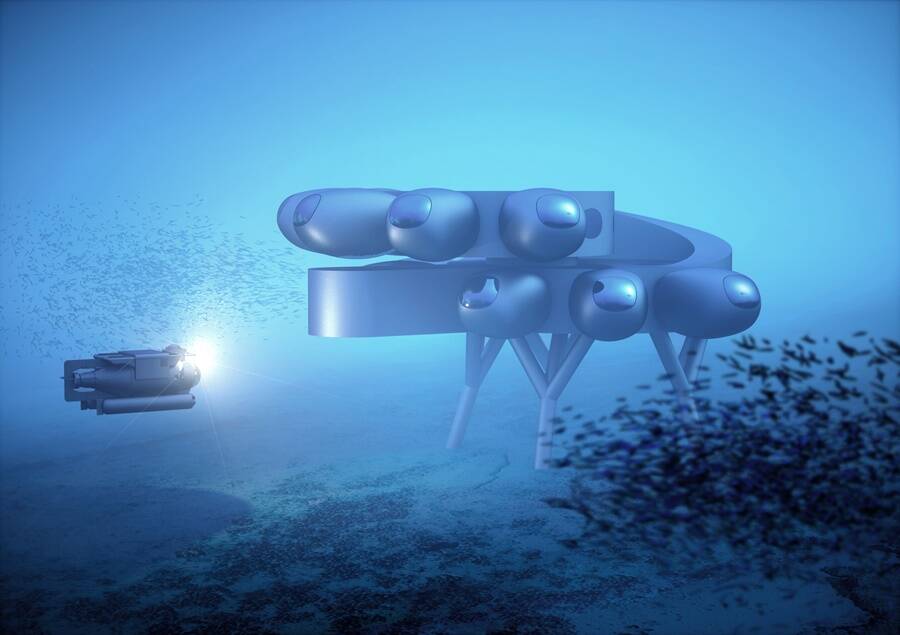 Yves Behar/Fuse ProjectThe Proteus is meant to accommodate long-term sea expeditions that could last for months.

“The social isolation, the humidity, the lack of light and lack of exercise all needed to be addressed,” Behar said. “I learned about these challenges from Fabien, who had the record as the person who lived longest in an underwater habitat.”

Indeed, Cousteau is no stranger to undertaking ambitious projects in the name of sea exploration.

His grandfather Jacques-Yves Cousteau was co-inventor of the aqua-lung apparatus which helps regulate breathing while scuba diving and helped develop one of the first underwater habitats known as Conshelf in 1962. 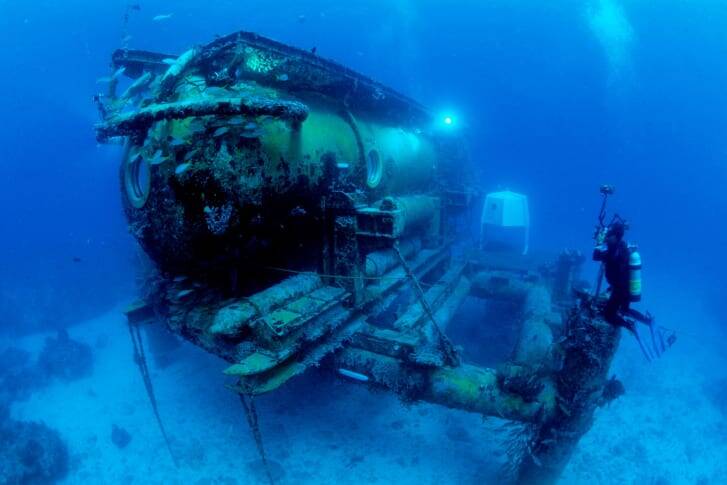 Mark Conlin/VW PICS/UIG/Getty ImagesThe Aquarius (pictured) is the size of a school bus and can only fit about six people.

Fabien Cousteau also participated in a 2014 sea expedition Mission-31. For 31 days, he shared an underwater living space with a team of five people inside the Aquarius habitat — which is about the size of a school bus — in the Florida Keys.

By comparison, the Proteus will have about 4,000 square feet of space, roughly the size of a big house. The idea for its all-inclusive design is to accommodate long-term research ocean expeditions — similar to how space missions are carried out. 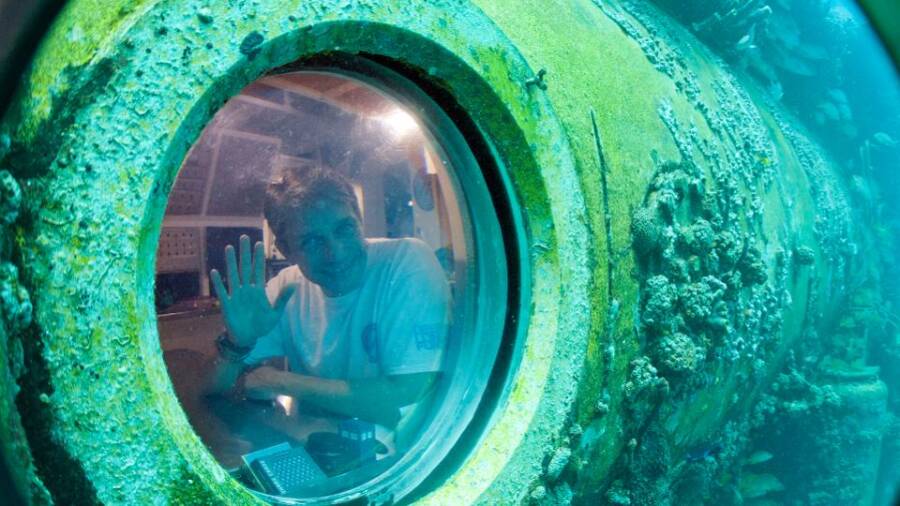 APFabien Cousteau, whose grandfather famously built the first underwater habitat, is behind the $135 million project.

“Most of the habitats were purpose-built for one mission or set of missions,” said Cousteau, co-founder of the New York-based non-profit Fabien Cousteau Ocean Learning Center. “They were never conceived as an ‘International Space Station,’ something that’s to be deployed for a longer period of time.”

The project is estimated to cost $135 million but that may be a small price to pay in advancing our knowledge of the ocean. Our oceans make up about 71 percent of the Earth’s surface, yet the National Oceanic and Atmospheric Administration (NOAA) estimates that humans have only explored about five percent and mapped less than 20 percent of these vast waters.

“Ocean exploration is 1,000 times more important than space exploration for — selfishly — our survival, for our trajectory into the future,” said Cousteau. “It’s our life support system. It is the very reason why we exist in the first place.”

Next, checkout how astronauts grew the first flower in space and see the designs for a luxury space hotel — named after a Nazi.