By 2025, You May Be Able To Stay In A Luxury Space Hotel Named After A Nazi

"Eventually, going to space will just be another option people will pick for their vacation, just like going on a cruise, or going to Disney World." 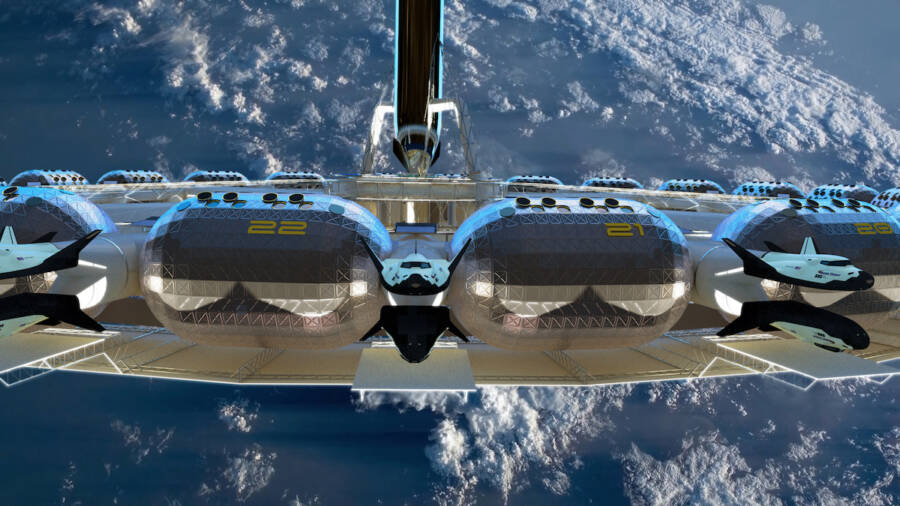 DezeenThe Von Braun Space Station is set to be the first commercial hotel in outer space.

As extreme tourism continues to grow — offering anything tours to the moon to recreational dives to the deepest places on earth — some companies have started looking to the sky for the next big thing.

One space start-up is hoping to launch the first luxury hotel in space named the Von Braun Space Station. The name comes from NASA scientist Wernher von Braun, who was the first to think up the concept behind the space hotel.

He was also a Nazi.

According to architectural design magazine Dezeen, the space hotel will be designed with a more natural, homey feel, in contrast to the cold, minimalist designs associated with space travel.

Tim Alatorre, the senior design architect for the project, drew comparisons with the space ship in Stanley Kubrick’s 1968 sci-fi thriller 2001: A Space Odyssey.

“While it made for a clearly futuristic feeling in the movie, in reality, it wasn’t a very inviting space. As humans, we innately connect to natural materials and colors,” Alatorre told Dezeen.

The space hotel is being designed by the Gateway Foundation, which hopes to have the space station up and running by 2025, with 100 visitors every week. Although we are still a long way from making space travel mainstream, the company wants to make the experience affordable for everyone.

“Eventually, going to space will just be another option people will pick for their vacation, just like going on a cruise, or going to Disney World,” Alatorre said.

The technology that will be used to design and build the Von Braun Space Station is based on earlier concepts that were designed by the Nazi scientist himself, who also developed the Nazis’ infamous V-2 rocket. After the end of the war, Wernher von Braun was hired by NASA, transforming himself into a renowned American scientist and contributing heavily to the American space program.

The Von Braun Space Station will have a rotating wheel that is about 623 feet wide in order to create a gravitational force similar to the moon’s. The design also boasts 24 individual modules fitted with sleeping accommodations and other support functions that will be dotted around the wheel; the Gateway Foundation calls this the “habitation ring.” 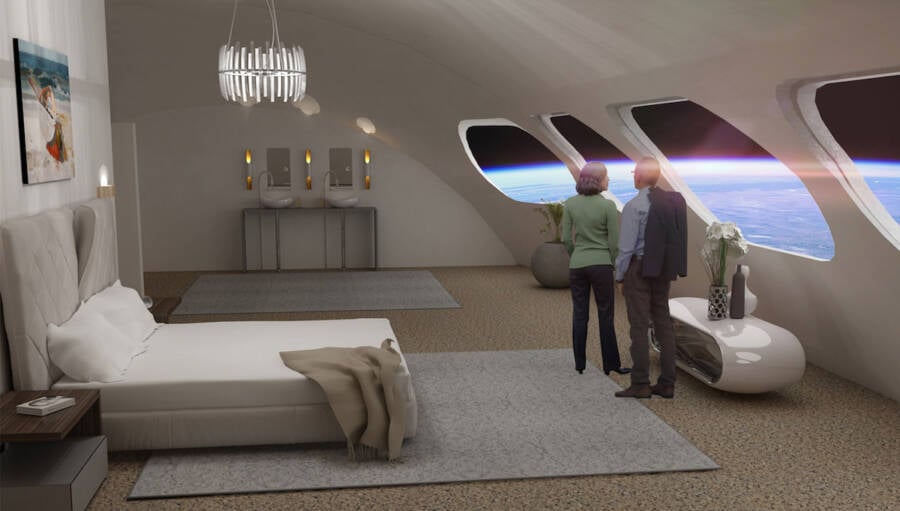 DezeenRendering of the ‘natural’ interior design inside the space hotel.

The Foundation plans to sell these habitation quarters to both long-term civilian residents and government agencies, as a hub for space. The space station will be able to house around 400 people.

The existence of gravity is a huge component to the success of the space hotel because it will allow it to have all the same comforts of a regular hotel on earth, meaning there will be a full-functioning kitchen for the restaurants and bars, movie screenings, theaters, and, of course, regular flushing toilets.

That means guests won’t have to worry about any constrictions when doing their business in space which continues to be an issue for astronauts.

Basically, the hotel will have everything that guests would expect to find on a cruise ship — only instead of deep ocean waters the view will be of earth. Although plans for the Von Braun Space Station are still ongoing, the company is already setting its sights on its next aerospace project: The Gateway, which will be a much bigger structure than the hotel to accommodate over 1,400 people at a time.

The company envisions The Gateway as a layover destination for space travelers on their way between planets or to the moon.

“These will be true cities in space that will be ports of call for those coming and going from the moon and Mars,” Alatorre said.

And while the name of the space station does seem like a fitting tribute to the man who originally conceived of the design, it begs the question: Who will want to stay in a space ship named after a Nazi whose V-2 rocket killed more than 20,000 prisoners who were forced to build it?

Now that you’ve learned of the luxury space hotel named after a notorious Nazi, check out these outrageous space colonies as imagined by NASA in the 1970s — and today. Then, discover the nine X-Files episodes that were based on real events.