"That's been about the strangest thing that I've come across out there in all my years of flying." 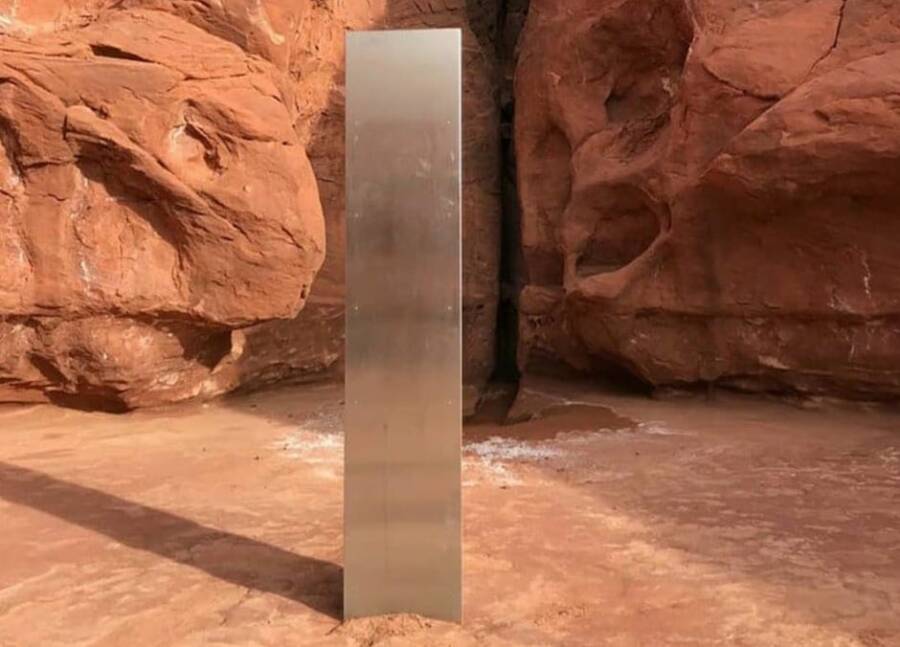 Utah Department of Public SafetyThe shiny monolith stands between 10 and 12 feet tall. It remains entirely unknown who made it.

On November 18, a routine aerial survey of Utah’s bighorn sheep led to a baffling discovery. Providing the Division of Wildlife Resources with a bird’s-eye view, officers of the Department of Public Safety’s Aero Bureau spotted a mysterious metal monolith planted in the middle of the desert.

According to CNN, the monolith sighting left wildlife and public safety officials utterly intrigued and somewhat unsettled. For those familiar with Stanley Kubrick’s 1968 classic 2001: A Space Odyssey, finding a monolith like this one isn’t exactly a sign of pleasant things to come.

Firmly planted into the ground in a desolate and remote area of southeastern Utah, the structure stands 10 to 12 feet high. According to The Guardian, it appeared to be made of some type of metal. Its pristine shine marked a stark contrast to the earthly, red-hued rocks around it.

“One of the biologists is the one who spotted it and we just happened to fly directly over the top of it,” said helicopter pilot Bret Hutchings. “He was like, ‘Whoa, whoa, whoa, turn around, turn around!’ And I was like, ‘What?’ And he’s like, ‘There’s this thing back there — we’ve got to go look at it!'”

Footage of the baffled Utah state employees at the site of the monolith.

The momentous flight appeared like any other, at first — as Hutchings was merely helping wildlife resource officers count southern Utah’s bighorn population with an aerial advantage.

“That’s been about the strangest thing that I’ve come across out there in all my years of flying,” he said.

Naturally, the odds that this is some sort of alien artifact are astronomically low. It’s far more likely that this notion, which was itself spawned by Kubrick’s 1968 masterpiece in the first place, was cheekily wielded by the monolith’s creator to give a jolt to anyone who found it.

“I’m assuming it’s some new wave artist or something or, you know, somebody that was a big 2001: A Space Odyssey fan,” said Hutchings.

Nonetheless, the subsequent footage capturing officials approaching the object was ominously familiar to those who’ve seen the film. Dressed in overalls resembling the movie’s spacesuits, two of the officers slowly neared the monolith — and climbed on each other’s backs in a monkeyish manner to see over the top. 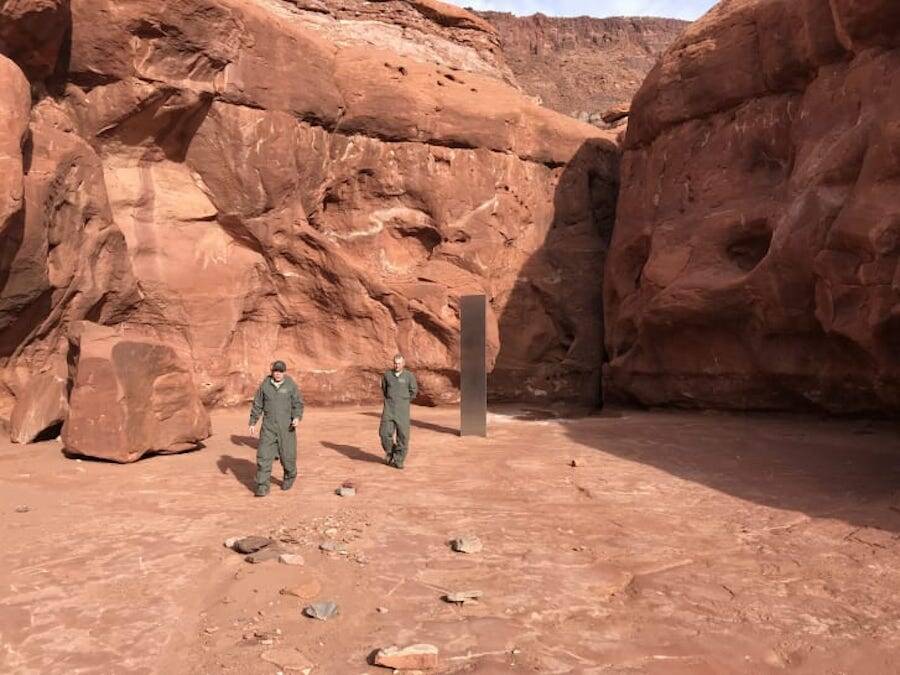 Utah Department of Public SafetyOfficials stood on each other’s shoulders to peer over the monolith’s top, but didn’t find any clues.

“We were kind of joking around that if one of us suddenly disappears, then the rest of us make a run for it,” said Hutchings.

While the bighorn sheep population was temporarily forgotten, the responsible wildlife officials soon returned to business and carried on with their duties. The curious species inhabits some of Utah’s most remote and topographically rugged landscapes, and are remarkably independent in terms of hostile climate conditions.

As for the monolith’s location, the state officials and their employers have opted not to disclose where it stands. That has naturally become a manner of intrigue on its own, as suspicious internet onlookers have drawn nefarious conclusions as to why there’s a need for secrecy.

For wildlife experts, of course, the answer is rather simple: there’s an unnecessary risk of amateur explorers getting stuck in these remote areas and consequently requiring time-consuming and costly rescues.

Additionally, the Utah Department of Public Safety responded to the incident with a statement, saying, “It is illegal to install structures or art without authorization on federally managed public lands, no matter what planet you’re from.”

Who made this monolith remains unclear, though some have likened it to the plank sculptures of artist John McCracken. McCracken has been dead for nearly a decade, however, and his gallerist hasn’t commented on the matter yet.

Perhaps most succinct in explaining the public’s fascination with the object, artist Liam Sharp tweeted:

After learning about the mysterious metal monolith discovered in the Utah desert, check out 25 wonderful cinemagraph GIFs from Stanley Kubrick movies. Then, learn about the nine most convincing alien abduction stories in modern history.