The Vajont Dam was the tallest in the world, but its unstable construction terrified those who lived in the valley below. On October 9, 1963, their worst fears came true. 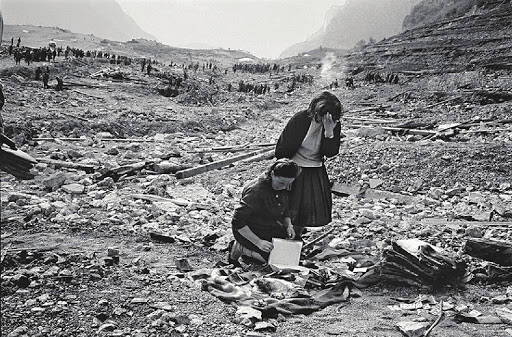 Wikimedia CommonsA landslide into the Vajont Dam reservoir in Northern Italy triggered a 13-billion-gallon mega-tsunami that engulfed the region.

Those who visit the Piave River Valley in Italy today would never suspect that the area was once subject to a massive and destructive dam disaster.

There are only a series of homely towns, rich in greenery, nestled here along the southern extremities of the Alps. However, as one goes further northward, they will eventually encounter an odd sight. Beyond two snow-studded peaks, straddling a narrow gorge, lies an enormous wall of concrete. This is the Vajont Dam.

The Vajont Dam is one of the largest dams in the world, standing over 850 feet tall — yet it is completely empty. That’s because a combination of overzealous human construction and rash oversight lead to its terrible demise.

Indeed, on one fateful day in 1963, a landslide instigated one of the worst dam disasters in history, creating a 13 billion-gallon tsunami that tore into the Piave valley and killed over 2,000 people.

The Vajont Dam Represents A New Phase In Post-War Italy 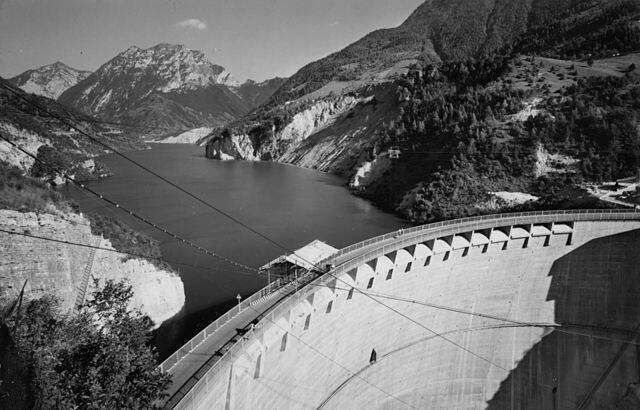 Wikimedia CommonsThe Vajont Dam when the reservoir was full before the disaster.

The Vajont River Gorge is one of the deepest naturally occurring narrow canyons in the world. Since the 1920s and 1930s, many had suggested that a hydroelectric dam should be built in the area between the two mountain ridges. This dam would be a crowning achievement of civil infrastructure, with the convienient effect of supplying energy needs to all of Northeastern Italy.

The only problem? The peak on the right of the dam is officially named Monte Toc, or “the walking mountain,” because of its propensity for landslides.

Benito Mussolini’s fascist government first approved the building of the dam during World War II, but it ultimately would not come to fruition until the 1950s. Flush with post-war cash due to the Marshall Plan, an American economic aid plan for western Europe, Italy finally began constructing the dam when Società Adriatica di Elettricità (SADE), one of the largest electric companies in the country, stepped up to the bat.

Across the country, the dam’s construction was widely regarded as a sign of technological prowess and societal advancement. Locals in the towns dotting the landscape beneath the dam, however, were not nearly so sure. 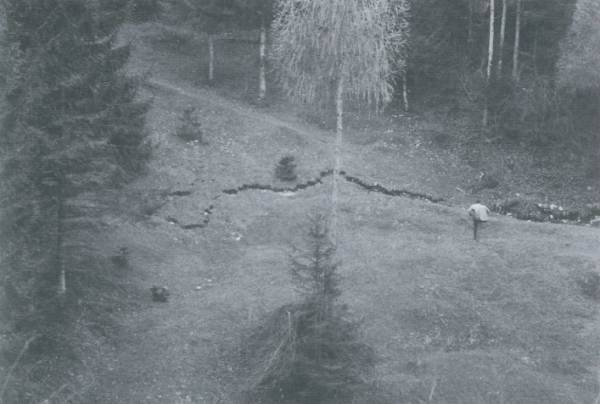 Via American Geological UnionCracks formed almost immediately in the mountains where the Vajont Dam was constructed.

The Vajont River gorge was historically known to be unstable. Beyond the mere lore of “the walking mountain,” geologists studying the area had known for decades that part of the gorge itself formed from a major paleo-landslide thousands of years ago. Indeed, even natural dams in the area constantly changed; their collapses were regular with frequent landslides and erosion.

Despite this opposition and damning evidence, the building of the dam forged ahead. The Italian government had granted SADE a near-monopoly on Italian energy earlier in the decade and so, in 1957, when construction started, nobody could stop them.

The Dam Was Doomed To Fail 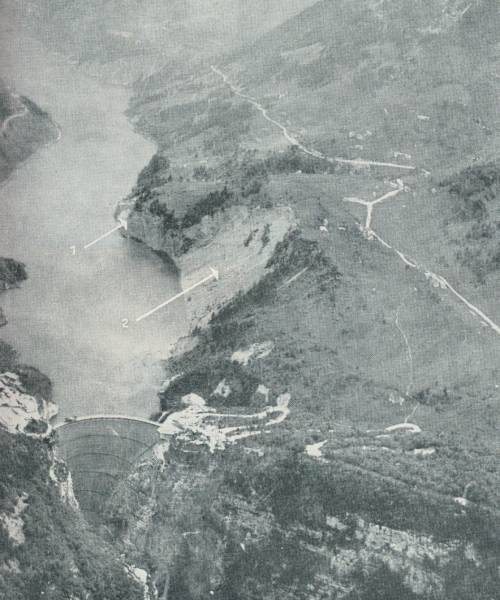 Via American Geological UnionThe aftermath of the landslide that destroyed the dam.

It became apparent almost immediately into its construction that there were major issues with the dam. In 1959, engineers discovered that the dam’s construction was instigating minor landslides and earth tremors across the valley. In mid-1962, the nearby municipalities of Erto and Casso reported earthquakes at a level 5 on the Mercalli Scale. This meant the tremors were strong enough to overturn objects, break dishes, and move furniture.

Yet, when journalists began to report on the issue, local governmental authorities sued them for “undermining social order.” The government claimed that the journalists did not have recordings of the quakes or definite evidence to back up their complaints, and the local officials agreed that it would be easier to simply quell the stories than to confront them. Rather than facing the problem, the government opted to cover it up.

Despite concerns, SADE began filling the empty reservoir with water in early 1960. While progress was slow at first, by October of that year, the water level reached nearly 560 feet — and surrounding mountains began to feel the strain. At this point, literal cracks began forming on the mountain faces on either side of the reservoir. One such crack reached 1.2 miles long.

Vajont Survivor’s CommissionThe city of Longarone, before and after the Vajont Dam disaster.

In November of that year, just a month after the first fissures began to form, technicians filled the reservoir to 590 feet. The mountain gave out under the strain. The surrounding hillsides released nearly 1 million cubic meters of rock, roughly equivalent to the volume of the Empire State Building, into the lake. Although the landslide was relatively small, it was a warning sign, and technicians quickly lowered the water level.

After a flurry of studies and research into the area, Vajont Dam technicians came to the somber realization that the mountain was inherently unstable — and unstoppable. The lead engineer from SADE even acknowledged as much, noting retrospectively that, “It appeared hopeless to arrest the slide artificially, because all means that would have had to be applied were beyond human bounds.”

The fate of the entire valley had been sealed in that dam.

A Mega-Tsunami Engulfs The Valley 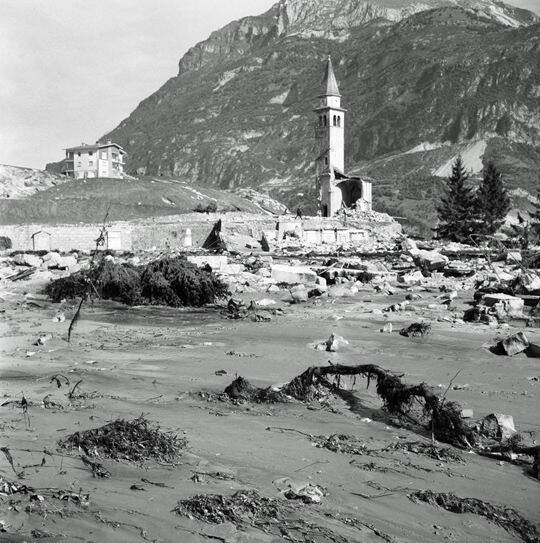 Wikimedia CommonsA church tower is one of the last few structures left standing after the tsunami.

Despite the risks, dam engineers came to believe that they could fill the reservoir up to 25 meters below its maximum level and still avoid a disaster. With careful studies and risk monitoring, they believed that they could control the issue.

And so they began filling. That year, just months after the first landslide, SADE raised the dam’s water level faster than any period before. The surrounding mountainsides responded in turn, shifting up to 3.5 cm/day, a huge increase from levels of 0.3 cm/day in the year prior. By 1963, the dam was completely filled — and the south side of the Monte Toc moved as much as a meter per day.

On Oct. 9, 1963, engineers began to see trees and rocks falling in the area, destroyed by a landslide. Based on the simulations they had created, however, the engineers believed that only a small wave would form in the reservoir as a result of this landslide. For a second, they relaxed.

Suddenly, however, at 10:39 p.m., a massive 260-million-cubic-meter chunk of the mountain began to hurtle down Monte Toc at an astonishing 68 m.p.h. As the mass careened into the reservoir, a 250-meter wave formed on impact, displacing 50 million cubic meters — or 13 billion gallons — of water in the process. 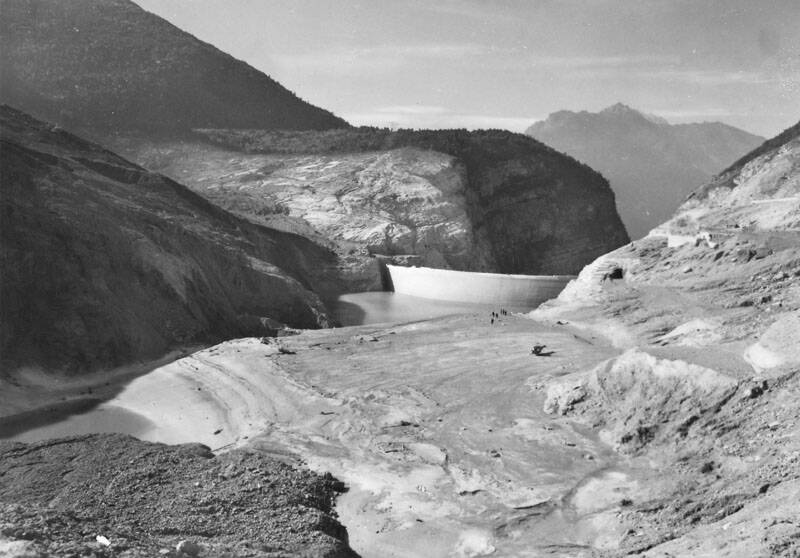 Wikimedia CommonsThe reservoir after the landslide and ensuing tsunami.

This resulting mega-tsunami utterly demolished the villages in the Piave Valley below. In the following hour, as a primordial tsunami dominated the landscape underneath, nearly 2,500 people lost their lives. Entire towns crumpled, and 60-foot impact craters scarred swaths of the landscape. Nearly one-third of the population of the town of Longarone perished.

Victims Of The Disaster Receive Some Justice

Today, nearly 60 years later, Monte Toc still bears wide gashes from the landslide as a visceral reminder of the disaster that transpired there.

The sheer magnitude of the Vajont Dam disaster stoked an uproar across the country. How could such an engineering marvel, supposedly built and maintained by the top scientists and geologists in the nation, have failed to such an extent?

In the years after, survivors have taken the government and dam engineers to court. In 1969, after a highly publicized trial, the president of the firm that built the dam, the chairman of the regional Public Works Council, and a lead company engineer were all convicted of negligence and manslaughter — each was sentenced to six years in prison. After further legal battles, some of the survivors were eventually compensated for their ordeal.

In 2008, UNESCO listed the Vajont Dam disaster as one of the worst man-made environmental disasters in history. The incident ought to serve as a reminder that man cannot put total faith in the idea of technological progress. The Vajont Dam pitted dam against mountain, man against nature. In the end, nature won out.

After this look at the Vajont Dam disaster, check out 34 photos of the deadliest catastrophes in modern history. Then, discover the worst natural disasters of the 21st century.

Jeffrey Wang
Jeffrey G. Wang is an amateur historian from San Diego, CA. He also writes on Quora, where he was a 2018 Top Writer.
You might also like
Remove Ads
×
Follow hu On