More U.S. Veterans Have Committed Suicide In The Last Decade Than Died In The Vietnam War

Since 2008, more than 60,000 U.S. veterans have taken their own lives, with more than half of those deaths via firearms. 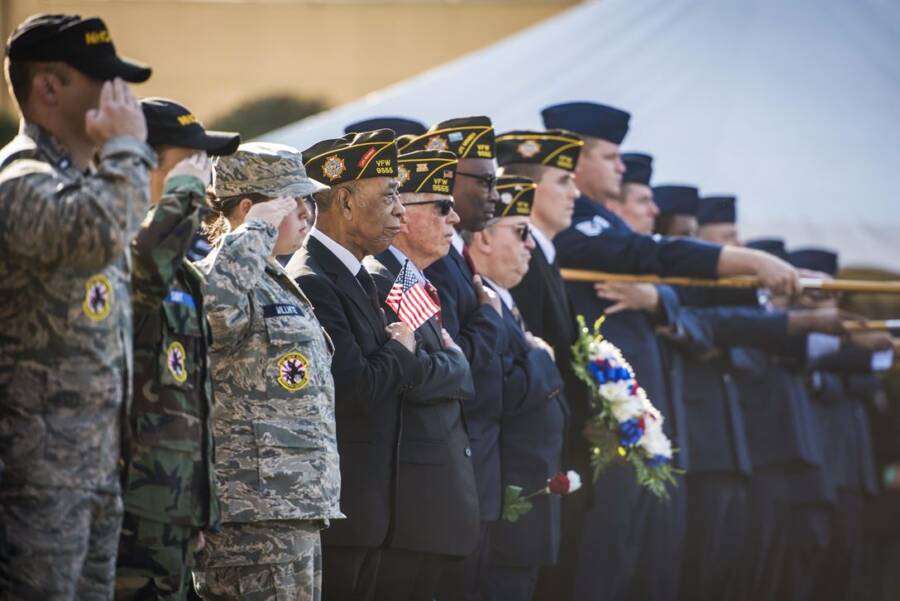 U.S. Department of Defense/Senior Airman Donald HudsonVeterans pay their respects at a Veterans Day ceremony in Japan in 2017. 6,139 veterans killed themselves that year.

When soldiers return home from war, they may feel that the worst is over. They made it back alive and are now free from the fear of dying in combat.

The reality, however, is much more complicated and alarming: More U.S. veterans have committed suicide between 2008 and 2017 than the number of U.S. soldiers that died during the entire Vietnam War. According to the defense news site Military.com, the U.S. Department of Veterans Affairs (VA) shared these alarming rates in a September 2019 report.

More than 6,000 veterans committed suicide every year during that timeframe, despite the fact that the total number of veterans declined by 18 percent.

This statistic serves as a stark reminder that soldiers need mental health treatment just as much as medical care for their physical injuries.

A 2017 FOX Business segment on the increasing rates of suicide among veterans.

The rate of veteran suicide continues to increase with each and every passing year. In the worst year on record, 6,139 veterans killed themselves in 2017. This marks an increase of two percent from the previous year — and a total increase of six percent since 2008.

Shockingly, almost 70 percent of veterans who killed themselves did not receive healthcare services from the VA in the lead-up to their suicides.

The report also found an unnerving number of suicides among former National Guard and Reserve members. These veterans were never “activated,” as the military describes it, and thus have no access to VA services. Within this group, there were 919 suicides in 2017 — a rate of 2.5 suicides per day. In total, around 12.4 percent of all military suicides in 2017 came from this group.

2017 was also the first year that the suicide rate for veterans reached 1.5 times the rate for non-veteran adults in the U.S.

CBS Evening News on the veteran suicides on VA properties.

While the VA’s report didn’t account for how effective its mental health programs have been, veterans are clearly in need of better care.

The VA statement accompanying their report underlined just how complex of an epidemic this really is. Officials in charge explained that the department is simply incapable of addressing the issue and that it needs help from the private sector to properly tackle it.

“We cannot do this alone,” said Dr. Richard Stone, the Executive in Charge of the Veterans Health Administration. “We call on our community partners to join us in this effort.”

“VA is working to prevent suicide among all veterans, whether they are enrolled in VA health care or not,” said VA Secretary Robert Wilkie.

“That’s why the department has adopted a comprehensive public health approach to suicide prevention, using bundled strategies that cut across various sectors — faith communities, employers, schools and health care organizations, for example — to reach veterans where they live and thrive.”

A CNN segment probing the inefficiency of the Department of Veterans Affairs.

However, the Government Accountability Office reported in December 2018 that the VA left almost $5 million of its suicide prevention outreach budget unused. Social media posts, public service announcements, billboards, and advertisements all declined in 2017 and 2018 — though this trend began to increase in 2019.

“The benefit of separating out subgroups is that it can help us identify higher-risk subgroups of the whole, which may be able to help us determine where and how to best focus resources,” he said.

According to the Federal Register, President Trump signed an Executive Order in March 2019 to do just that.

Order 13861, or the “President’s Roadmap to Empower Veterans and End a National Tragedy of Suicide” (PREVENTS) created a task force led by Wilkie to help consolidate federal funds and make suicide prevention more effective. The task force will offer research grants to state and local governments as well as collaborate with the private sector to address this issue.

“Veteran suicide requires an all-hands on-deck approach to preserve the lives of our Veterans who have served our country,” said Wilkie. “This is a call to action.”

After learning about the veterans’ suicide crisis that has claimed more U.S. soldiers’ lives than the Vietnam War, take a look at 22 portraits of U.S. veterans after a decade of war in the Middle East. Then, learn about the Vietnam veteran who died covered in ant bites at a Veterans Affairs hospital.