Often described as the voice of Chile’s poor, Víctor Jara was brutally tortured and executed during the military coup that installed General Augusto Pinochet as dictator in 1973. 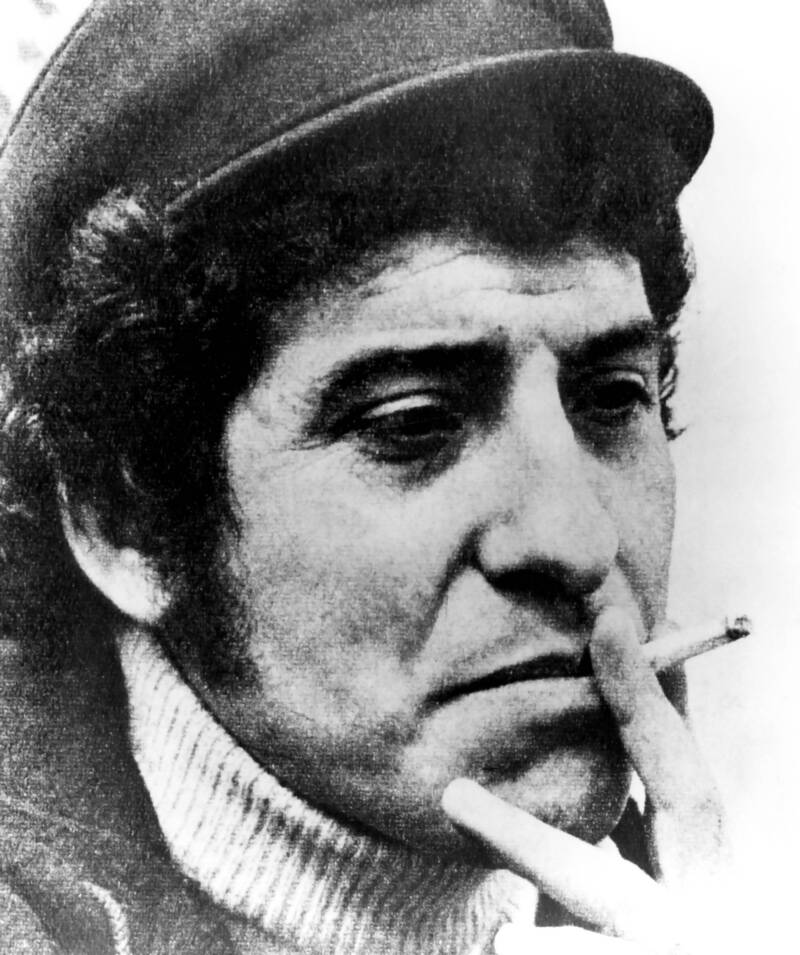 Gems/Redferns/via Getty ImagesVíctor Jara, c. 1960. Jara was a leader in Chile’s folk music scene who was executed during Chile’s 1973 coup for his socialist politics.

Like many countries, Chile was at a crossroads as the 1960s came to a close. The worldwide shift in political and cultural attitudes had seen a groundswell of hunger for change in a country long dominated by a land-owning ruling class. To poor and marginalized Chileans, that change was represented by Víctor Jara, a wildly popular and outspoken singer who championed the cause of left-wing President Salvador Allende.

The son of peasant farmers in rural central Chile, Jara had endured many of the struggles his countrymen faced well into the 20th century, finding dissatisfaction in the traditions of the church and postcolonial society and going through several periods of outright hardship and hunger.

He set these experiences to song and countered them with a vision for a better way. And he sang of that vision right up through his torture and to his murder at the hands of the military following the CIA-backed Chilean coup in September 1973.

Although his music was banned under the dictatorship of Augusto Pinochet and the military junta that ruled Chile with an iron fist for the next 18 years, it circulated widely underground, and gave hope to millions. 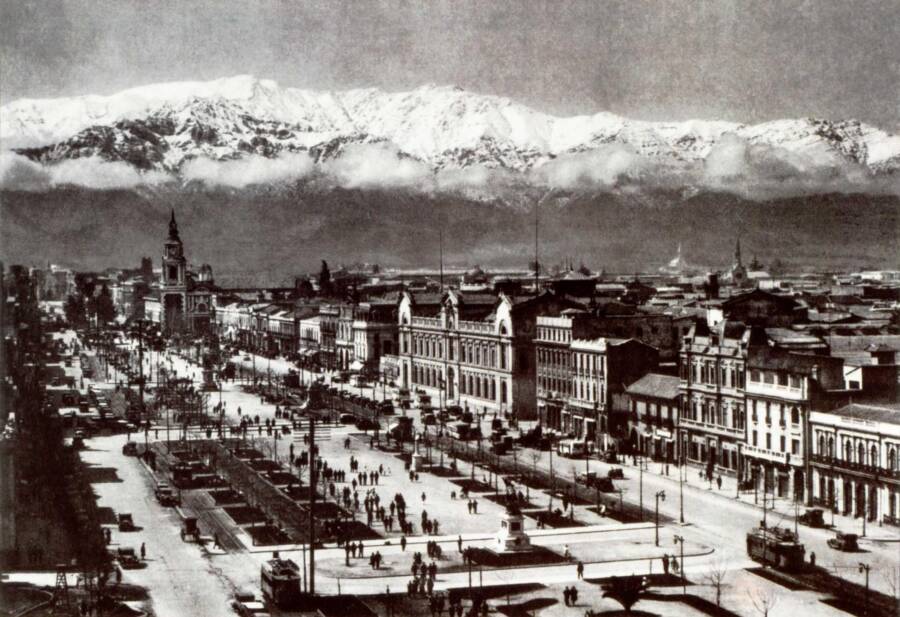 Wikimedia CommonsJara spent much of his childhood near the Alameda neighborhood of Santiago, Chile’s capital.

It was Amanda Martínez, Víctor Jara’s mother, who first taught him to play music. A resilient woman descended from the Mapuche Indigenous people of Patagonia, she struggled to raise Víctor and his siblings alone after her abusive husband abandoned them.

Looking for work that would allow her to support her children, Amanda moved the family to Santiago, the capital city, where she got a job as a cook in a marketplace. Just a few years of back-breaking work were enough to give her a stroke when Víctor was 15. His siblings long gone to other lives, he was left alone.

Jara drifted through a period in a seminary and a year of military service before traveling to northern Chile in 1953, where he rediscovered the traditional music to which his mother had introduced him.

Inspired, he applied to an acting course at the University of Chile, where he refined his vocal and performance abilities and met a generation of young artists who were breathing new life into long-forgotten folk music styles. 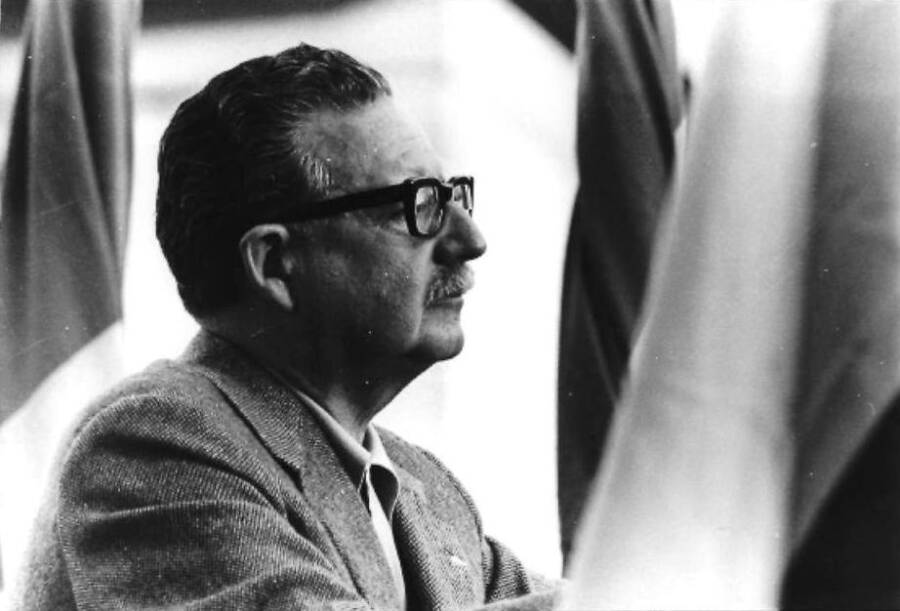 While in school, Víctor Jara gravitated towards political activism. He became attracted to the Communist Party of Chile, which he would later join, after touring the country and visiting Cuba and the Soviet Union. In 1958, as he entered his third and final year at the university, the Communist Party was only just emerging from a decade during which it had been outlawed.

Many poor Chileans saw it as a party that represented their interests rather than those of the landed oligarchs. To Jara, who’d grown up in both a rural village and a Santiago slum, he found in the party a means to effect real change.

It was during the presidential election of 1958 that Jara first learned of Salvador Allende, the founder of Chile’s Socialist Party who campaigned on a platform of radical social, economic, and political reform. Allende secured 28.5 percent of the vote that year, but he couldn’t compete with his opponent Jorge Alessandri’s land-owning and industrialist financial backers, and lost by a slim margin.

Despite the loss, Allende had won a key convert in Jara, who would follow the politician’s career intently over the following decade. 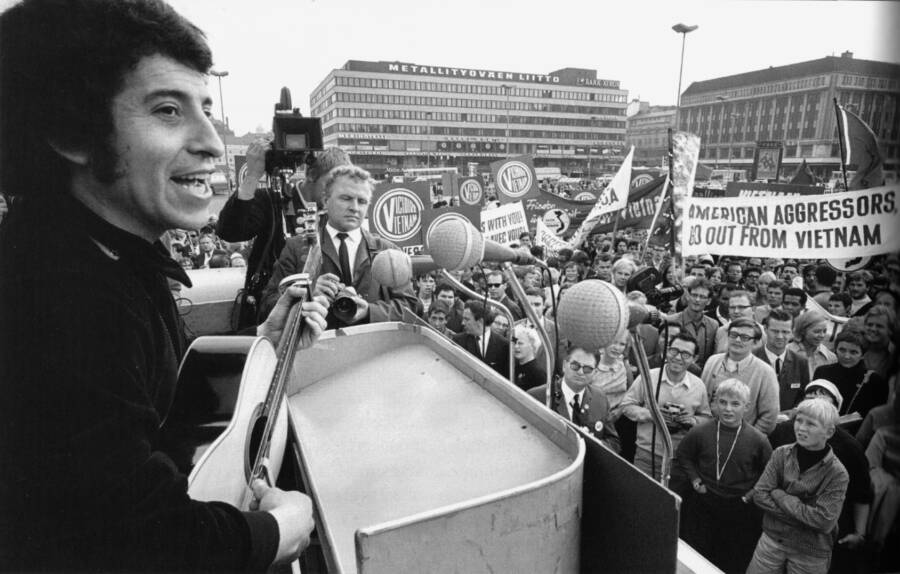 Víctor Jara spent the next few years honing his musical abilities, stockpiling folk songs and composing original tunes. In 1960, he met the English-born dancer Joan Turner and, after a short courtship, married her and adopted her baby daughter as his own.

His recording career began in earnest in 1966, with albums of songs that reflected working class and humorous themes. They were a hit. He’d had success playing coffee shops and bars up until then, but his records made him known throughout Chile and South America, even when censors kept some of his more daring compositions off the radio.

In 1969, an event occurred that would change Jara’s career and life permanently. Ninety impoverished families moved onto unused land outside of the southern port city of Puerto Montt. Their plan was to gain a legal right to the land and settle there. 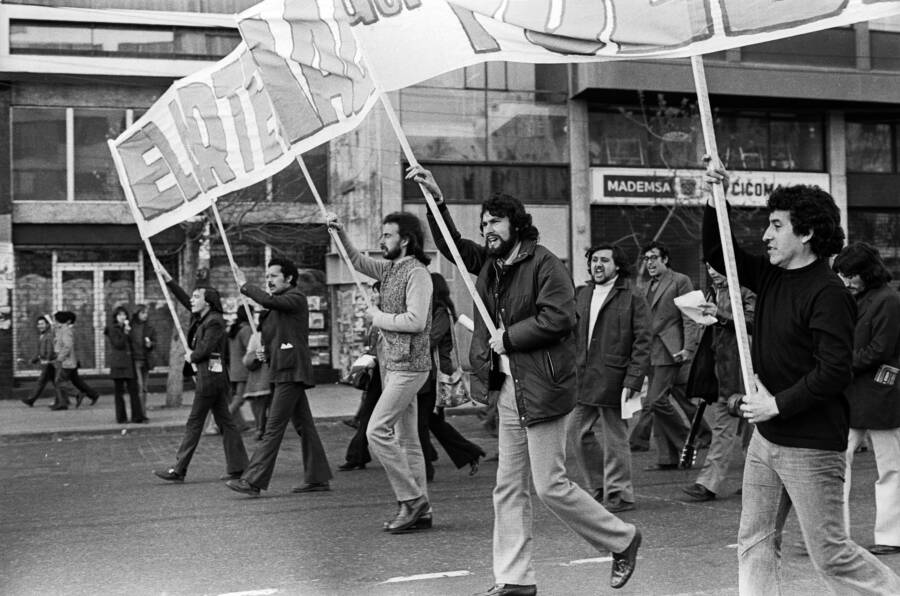 Getty ImagesA more overt political tone emerged in Jara’s work after a group of squatters were violently attacked in Puerto Montt, Chile.

This new direction made him a natural ally for Salvador Allende when he decided to run once again in the 1970 presidential election. This time, Allende ran on a platform of land redistribution, increasing the availability of housing, healthcare, and education, and nationalizing the largest industries, including the powerful United States-owned copper mines.

On the radio, Jara’s songs, like “Venceremos” (“We Will Overcome”), which became the movement’s anthem, encouraged huge numbers of Chileans to turn out in support of Allende. Jara was a visible presence in rallies, marches, and benefit concerts to raise money for the campaign.

The combined efforts of the coalition backing Allende paid off. On September 4, 1970, he narrowly won the presidency, beating out his old rival Alessandri. The Chilean working class celebrated, while conservatives, army officers, and the United States looked on in apprehension.

The Bloody Outcome Of The 1973 Chilean Coup D’Etat 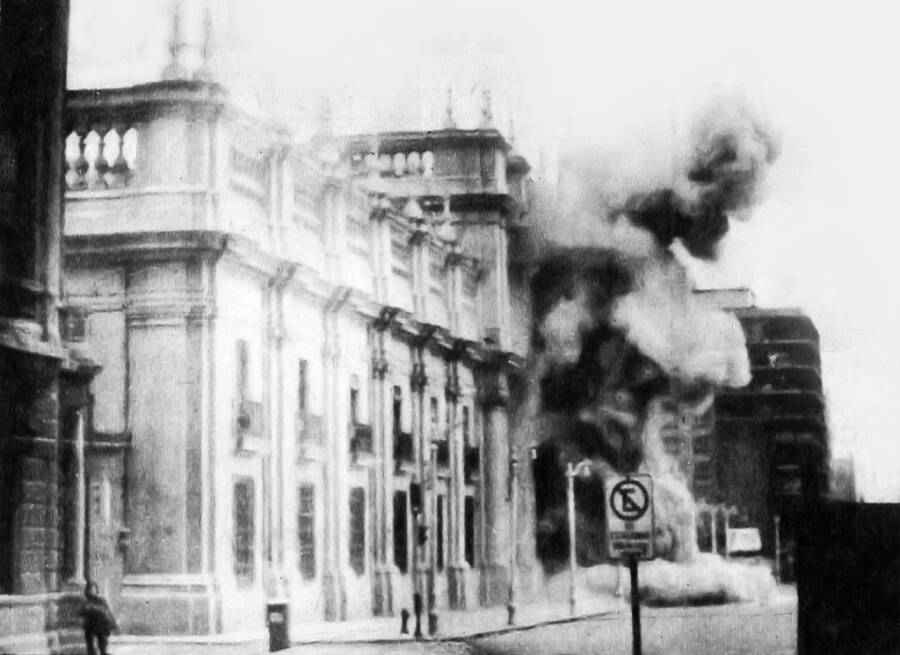 Wikimedia Commons/Library of the National Congress of ChileThe bombing of Chile’s presidential palace was the shocking peak of the 1973 coup d’etat. Shortly afterwards, Allende shot himself, signaling the beginning of nearly 20 years of military rule.

Allende got to work enacting his reforms. To Víctor Jara, it was a time of promise. As Joan Jara later remembered:

“All those people who’d been struggling all their lives were crying and Allende arrived and he was almost in tears and I remember I had the honour of going to congratulate him. And he said: ‘Hug me harder because this is a very special day.'”

Elements in the army, however, were not happy. Officers led by General Augusto Pinochet, along with the former ruling class, were a constant obstacle to Allende’s reforms. U.S. officials and industrialists, alarmed at what they saw as a covert communist revolution, offered “extensive and continuous” support in the form of more than $8 million in secret funding from the United States.

National Security Advisor Henry Kissinger summed up the administration’s attitude in an interview shortly after the election:

“I don’t see why we need to stand by and watch a country go communist due to the irresponsibility of its people. The issues are much too important for the Chilean voters to be left to decide for themselves.” 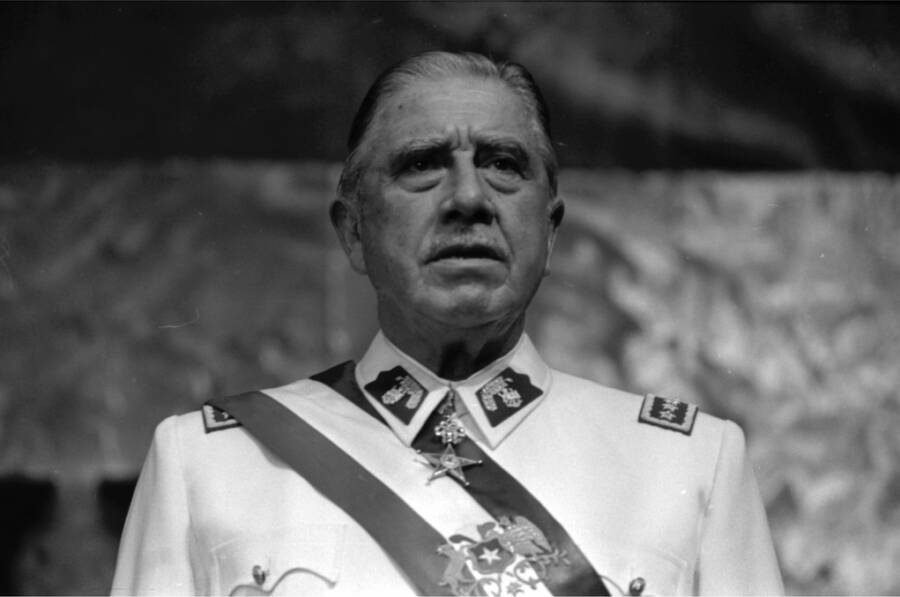 Wikimedia Commons/Library of the National Congress of ChileGeneral Augusto Pinochet (1915-2006) was Chile’s last military dictator, ruling from 1973 to 1990.

What Kissinger left unsaid was that he and the Nixon administration wasn’t just standing by. After three years, a destabilized political atmosphere — caused in part by false-flag operations and the import of anti-Allende propaganda by the CIA — and widespread strikes that crippled the economy presented Pinochet with an opening.

On the morning of September 11, 1973, Pinochet’s troops seized key military installations, shuttered radio and television stations, and surrounded La Moneda, the presidential palace, where Allende had retreated with an armed guard. After Allende delivered a farewell speech, Chilean Air Force pilots bombed the building, and he shot himself.

The government that Jara had fought to realize was no more.

In the aftermath, soldiers and police rounded up Allende’s supporters. Víctor Jara had been scheduled to perform at the University of Santiago, where he spent the night. The next morning, he was arrested and taken to Chile Stadium. Over a period of four days, Víctor Jara was tortured, beaten, and finally shot to death at the age of 38.

Witnesses stated that he once he was recognized on his way into the stadium, he was separated from the rest of the 5,000 prisoners and taken to a dressing room. There, soldiers broke his hands and wrists while demanding he play the guitar. Instead, he defiantly sang “Venceremos” through split lips.

Then, on September 16, 1973, an officer shot Víctor Jara through the right temple, allegedly in a game of Russian roulette. Then, at least three more soldiers shot more than 40 bullets into his body to make sure he was dead. 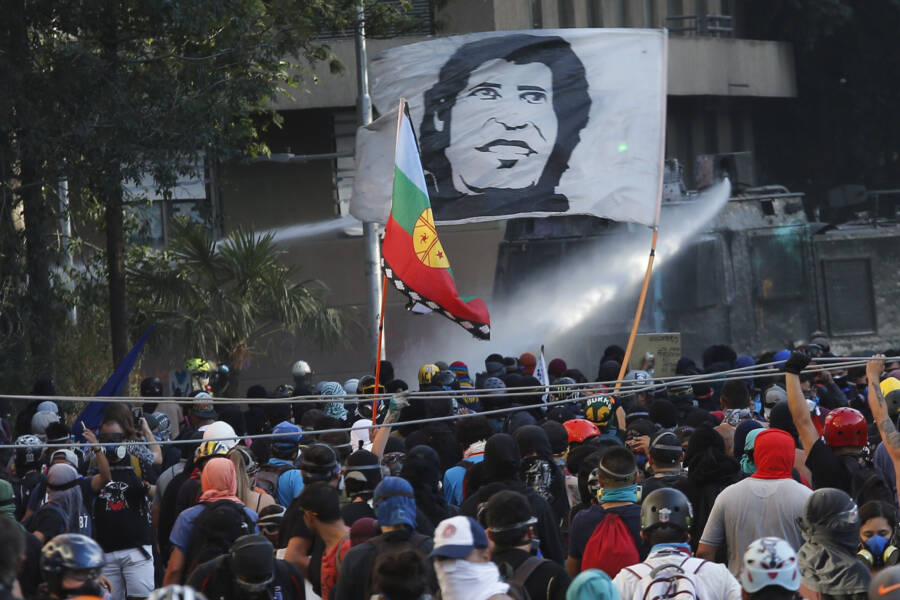 After Víctor Jara was killed, the army put his body on display outside of the stadium. Then, they collected it with the remains of other dead prisoners and dumped them nearby. When friends alerted Joan to the location of Jara’s body, she quietly gathered and buried it before fleeing the country with their two daughters.

In 1988, Chileans voted Pinochet out of power in a plebiscite, ending nearly two decades of dictatorship when he stepped down two years later.

The first of the men responsible for Jara’s murder wouldn’t be identified until 2008. Over the course of a decade, ten former soldiers and officers were charged with varying degrees of involvement, bringing a long and tragic chapter in Chile’s history to a close.

Today, Víctor Jara is still a revered figure in Chilean culture for his music, his activism, and his brutal final sacrifice. As a mark of atonement, the stadium where he died was renamed in 2004 to Víctor Jara Stadium.

After reading the tragic yet inspiring story of Víctor Jara’s life and death, find out more about Tank Man, the lone man who became a symbol of resistance in China’s Tiananmen Square Protests. Then, take a closer look at some of the most sinister programs ever carried out by the CIA.