Caused by a lightning strike in a forest in New South Wales, over 50 bushfires have spread throughout the region, threatening the last 43,000 koalas in Australia. 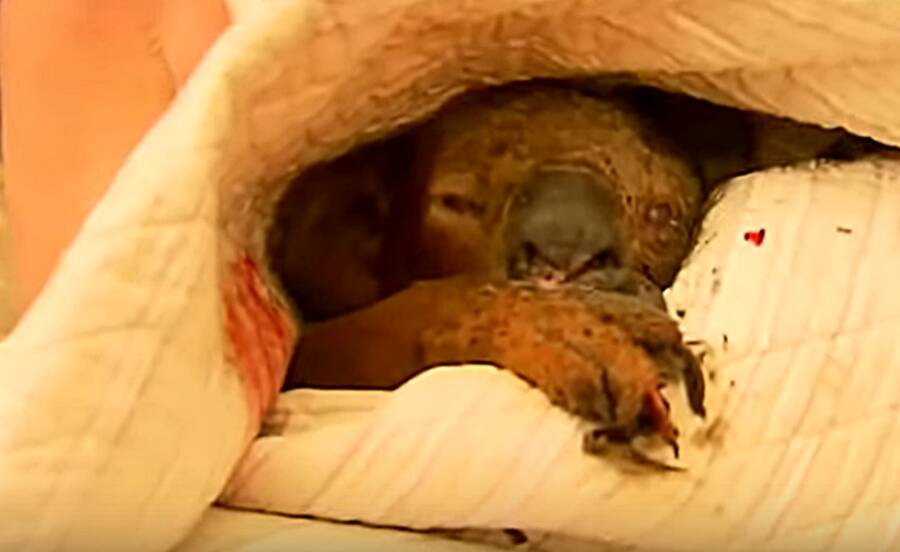 YouTubeVideo of the harrowing rescue of a koala who was trapped in an Australian bushfire has captured the world’s attention this week.

Much like the wildfires that have ravaged California this year, the bushfires in Sydney, Australia, have been devastating for both human residents and the surrounding animal populations. One furry victim of the fires around Sydney was a terrified koala bear trapped by the rapidly-spreading flames. But thanks to the heroic actions of a good Samaritan, the animal is now safe and on the road to recovery.

As reported by CBS News, a woman noticed the koala bear as it crossed a road in Sydney that ran through a wooded area caught up in a bushfire. Chasing after the koala, she followed it into a haze of smoke and rescued the animal from a tree in the midst of the blaze — and it was all captured on video.

Near the beginning of the video, recorded by a bystander, the koala is seen trudging across the road and up an embankment, crossing smoldering ground as flames spread wildly, mere inches away from the marsupial. That’s when Toni Doherty witnessed the helpless animal and made the split-second decision to attempt a rescue.

“He just went straight into the flames,” Doherty told a reporter from Australia’s 9News, “and I just jumped out of the car and went straight to him.”

In a brief window where the bushfire appears to subside, Doherty — having taken off her shirt — rushed half-naked through the burning forest toward the koala, who was clinging onto a nearby tree. With the thick white haze from the fires still blazing around her, Doherty used her shirt as a makeshift blanket, wrapping it around the animal before quickly rushing back to safety with the koala bear in her arms.

Toni Doherty bravely rushed into a burning forest to rescue a trapped koala.

As Doherty made her way back to the road with the koala — where a handful of bystanders had gathered — a voice from behind the cameraperson can be heard warning her, “Just be careful, his claws.” A man offered a large white-colored coat to use in place of Doherty’s ruined shirt as she instructed someone on the scene to fetch water out of her car.

Water bottle in hand, Doherty fed it to the koala who gulped it down quickly. Then, she doused the koala’s entire body with water to try and soothe the burns it suffered from the fire while the koala let out several heartbreaking cries.

A few water bottles later, the video showed a clearer image of the injuries the koala sustained. Pink, bloody patches of skin where the koala’s fur had been singed off are immediately apparent, and the koala’s left eye appeared shut from the burns around its face.

After the ordeal, the rescued koala was tucked safely inside the coat and was taken by Doherty and another rescuer to a nearby sanctuary, where the koala is now recovering from its injuries. Doctors there reported that the koala’s prognosis was good.

Toni Doherty pays a visit to the koala bear she rescued from an Australian bushfire, whom the doctors at Port Macquarie Koala Hospital have named Lewis.

Australia’s koala population has become seriously endangered in recent years — even without the threat of bushfires — due to a mix of disease, poaching, and a habitat in decline. They are listed as “vulnerable” under Australia’s Environmental Protection and Biodiversity Conservation Act and roughly 43,000 koalas are believed to be left in the wild. 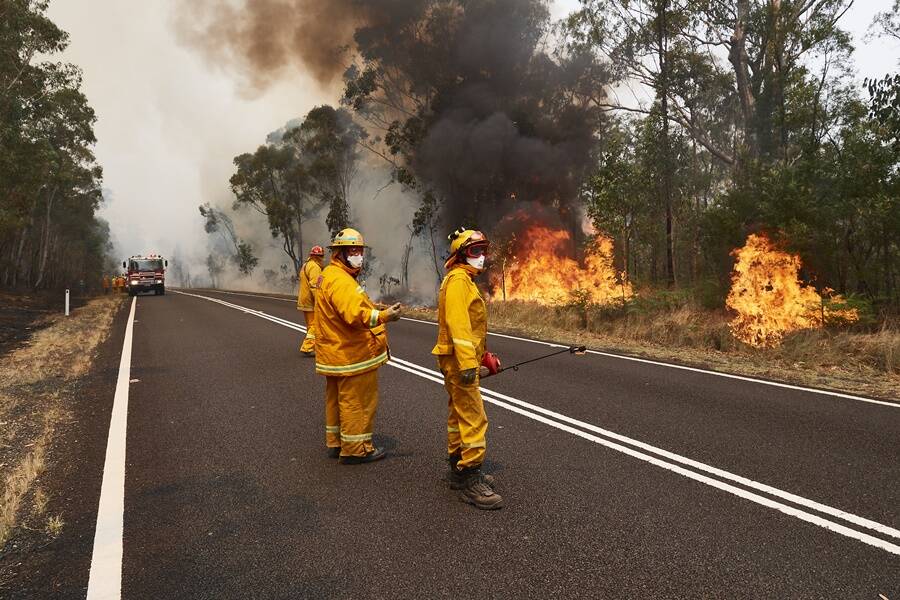 Brett Hemmings/Getty ImagesFire fighters work to put out the bushfires along Putty Road in Sydney, Australia.

Now, the population’s survival is further threatened by this year’s deadly bushfire season, which advocates estimate have killed more than 300 koalas since the fires began in October. At least 31 have been brought into the Port Macquarie Koala Hospital for treatment so far, and the hospital has launched a GoFundMe campaign to raise money for the koalas’ care.

“If we look at a 50 percent survival rate, that’s around about 350 koalas and that’s absolutely devastating,” the hospital’s President Sue Ashton told the Associated Press. “We’re hoping it’s not as bad as that, but because of the intensity of the fire and the way koalas behave during fire, we’re not holding out too much hope.”

During a bushfire, koalas try to survive by curling into a ball after climbing to the tops of nearby trees, but if a bushfire isn’t brought under control quickly, entire koala colonies can perish in the blaze.

“Twenty years worth of work at the place. I just feel like walking away, I really do,” she said. “I’m not going to, but it’s just awful.”

Two-thirds of the area destroyed by the fires is considered to be a koala “hot spot,” a fertile breeding grounds for the animal, which only adds to the pressure on the remaining koala population.

On the day of Doherty’s koala rescue, temperatures in west Sydney reached a scorching 98.6 degrees Fahrenheit and smoke from the raging fires has pushed the city’s air quality to “hazardous levels.” Tragically, at least six people have died due to the fires and with the end of the fires nowhere in sight, more casualties can be expected.

Now that you’ve witnessed the heartbreaking rescue of a koala bear from the ravaging bushfires in Australia, check out these adorable photos of a lost baby koala who was rescued by a golden retriever. Next, learn about the survival tale of a dog who was saved by Thai oil rig workers 135 miles offshore.