When a curious landowner on the Orkney Islands found human bones, archeologists investigated his grounds and found a staggering trove of Viking treasure underneath. 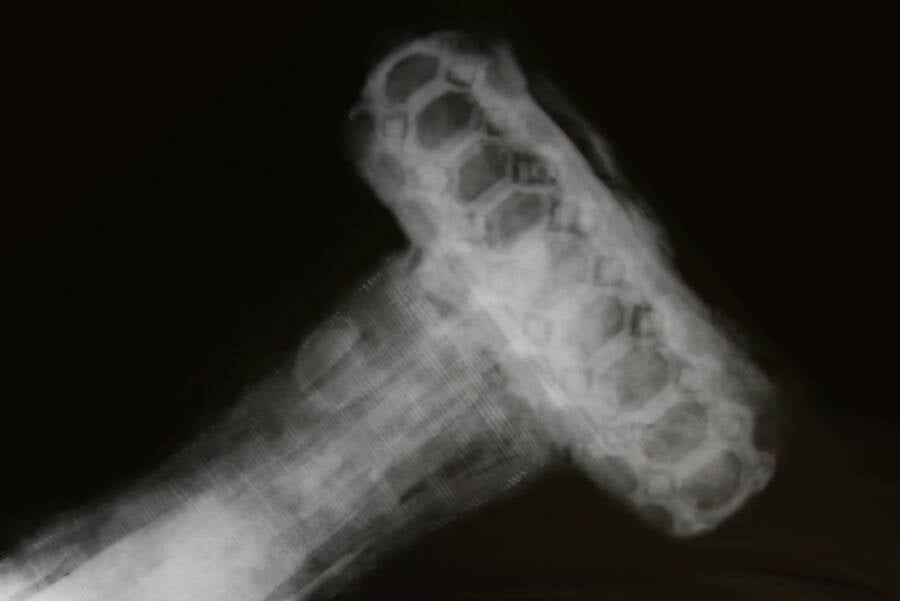 Scotland’s Orkney Islands are as isolated as they are historic. In 2015, archaeologists unearthed a Viking sword from the ninth century on the isle of Papa Westray. Dug up from what is now known as the “Mayback Viking burials,” it endured 1,000 years of corrosion — with X-rays now revealing its details for the first time.

According to The Smithsonian, the weapon was found in a hidden cemetery that yielded numerous Iron Age burials. Archaeologists were stunned to find several arrowheads, two shield bosses, and a buckle used for a waist belt or for the sword itself. A scabbard, or sheath for the sword, had fused to the weapon over time.

According to Historic Environment Scotland, the government agency funded a heritage company called AOC Archaeology to analyze these artifacts. Dated to between 850 and 950 A.D., the Viking-era treasures have since been transported to the mainland — where scientific imaging revealed the sword’s elaborate designs.

“To preserve as much evidence as possible, we lifted the whole sword and its surrounding soil in a block to be transported to the lab and forensically excavated there,” wrote Andrew Morrison, lead archaeologist. “The iron in the sword has heavily corroded, with many of the striking details only visible through X-ray.” 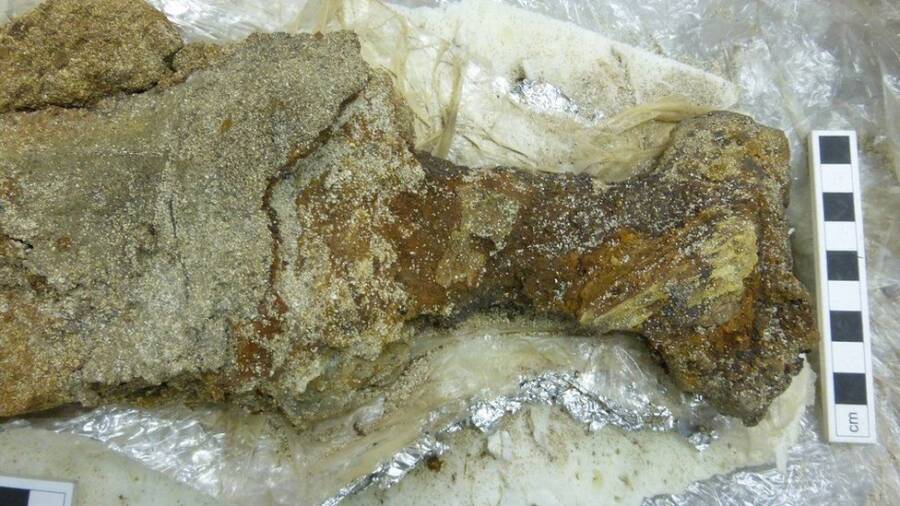 Remarkably, none of these revelations would have been made were it not for a curious Orkney landowner. Finding human bones littered across a sand ridge on his property in March 2015, he contacted the Orkney Council’s archaeologist Julie Gibson. When she confirmed the bones were indeed human, AOC stepped in.

After trekking to northeastern Papa Westray, the archaeological team discovered the remains were centuries old. Excavating the area, they unearthed a simple grave with no coffin, traces of stone linings, or a marker. Radiocarbon dating revealed it was an Iron Age burial and predated others nearby by over 1,000 years.

Over the next few months, they found another set of human remains alongside evidence of a Viking-era ship burial. In August 2015, they found a series of rectangular stone cairns and the remains of a Viking warrior. His sword had been oddly positioned, with the hilt by the feet and the tip of the blade over the face.

After AOC Archaeology’s senior conservator Gretel Evans block-lifted the grave, thorough research could finally get underway. Over the next six years, the team discovered the rest of the remarkable artifacts within the soil — with the sword remaining the most fascinating of all. 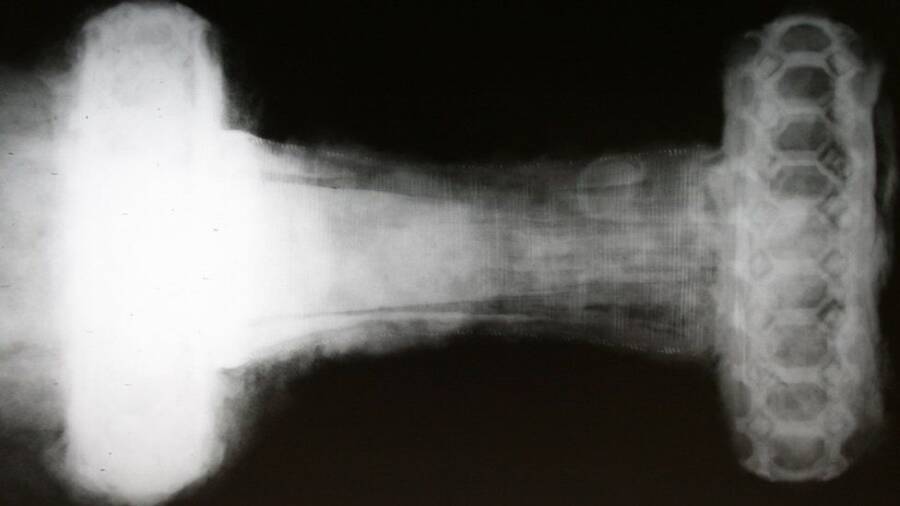 After careful X-rays allowed AOC Archaeology to get a closer look, they identified the Mayback Sword as a Pedersen Type D. This typology was created by Jan Petersen in 1919 and connotes some of the biggest swords ever used by the Vikings. They are so heavy, they need a sturdy hilt for balance and stabilization.

Remarkably, only about 30 even comparable swords from that era have ever been found. Half of those were unearthed in Norway, while the rest were discovered in Ireland, Slovakia, Poland, and Russia. Most staggering, however, is that this particular sword is one of only two Pedersen Type D swords known to exist.

“Possibly one of the most exciting and most complex artifacts [found at the site], this rare survival will have many stories to tell,” wrote Morrison. “It’s so fragile we don’t even know what the underside looks like yet, so our understanding is sure to change in the coming months.”

What we do know is that the guards of the Mayback Sword were once elaborately decorated. X-rays have shown it adorned with geometric patterns like elongated octagons, and potentially raised lozenges. Experts believe this was achieved with various metals and yielded a honeycomb-like design. 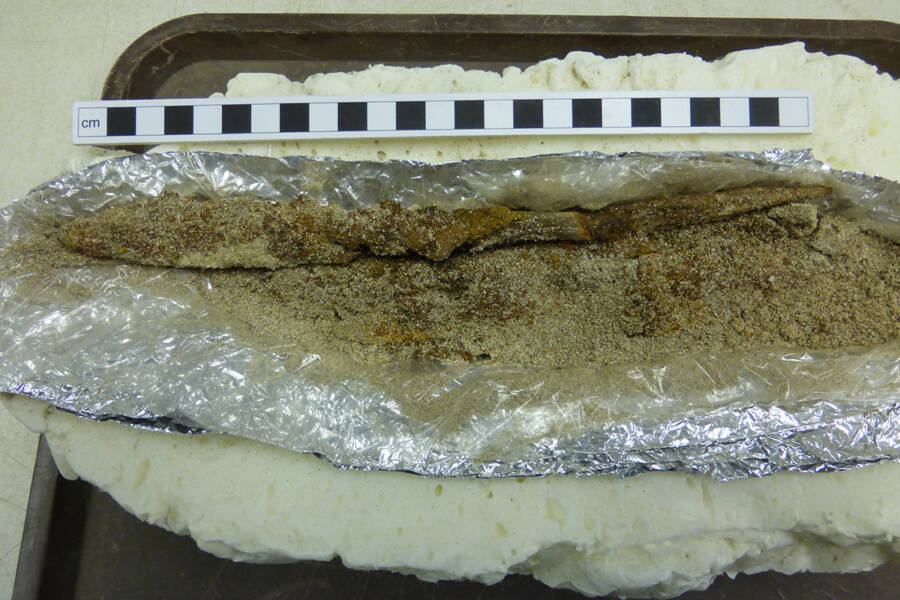 AOC ArchaeologyThe wooden arrows were preserved by the sediment around them mineralizing.

With the hilt found covered in mineralized organics, experts believe it was once adorned by a cover that was sewn onto the sword. The scabbard was found partially stuck to the double-edged blade itself, surviving as a piece of mineralized wood — much like the wooden shield bosses which also dated to the ninth century.

“Most Viking Age scabbards are made up of an inverted fleece lining next to the blade,” wrote Morrison. “This would have been contained within a sheath made from thin lathes of wood, then bound — possibly with strips of a fine textile.”

The experts are still unsure as to how many arrowheads they’ve retrieved, as they were found lumped together by corrosion. Their broadness suggested they were used for hunting rather than warfare, however. As for the brass or bronze buckle loop, it held an intricate design of bands, knots, and illustrated animal paws.

After reading about the Mayback Sword, learn about scientists confirming Vikings lived in North America 1,000 years ago. Then, read about the massive Viking ship burial discovered via radar in Norway.