Vintage Mongolia: Photos Of Life Before The Soviet Purge

In the 1930s, Stalin's forces slaughtered between 3 and 5 percent of the Mongolian population. Look back at the days, both gruesome and exuberant, before. 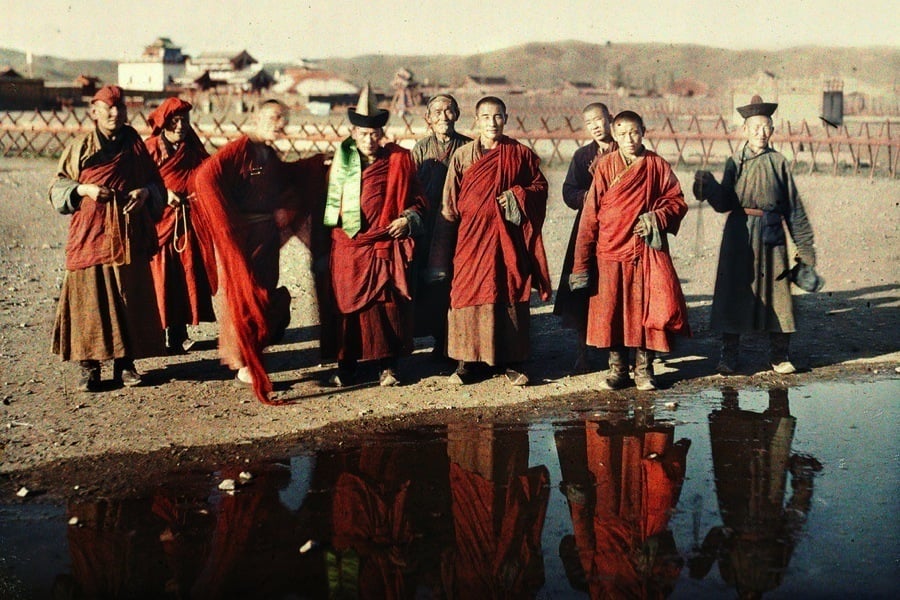 Buddhist monks in the Mongolia capital as it was over 100 years ago.

Nearly one hundred years ago, the Bolsheviks in Russia revolted. Mongolia, the cold, massive country lodged between Russia and China, had its own Communist revolution in 1921. Though Mongolia remained outside the Soviet Union, Joseph Stalin brought Mongolia heavily under Soviet influence with violent incursions into Mongolian life and politics.

During the Soviet purges in the 1930s, Stalin’s forces slaughtered between 3 and 5 percent of the entire Mongolian population. The Soviets showed particular disdain for the country’s rich Buddhist history, killing tens of thousands of monks and destroying around 2,000 monasteries and temples.

The photos in the gallery below show the world that existed before Stalin smashed it. As you’ll see, it was a world of tradition and religious exuberance, but also of cruelty and desperation. While much of Mongolian tradition survived the violence of the 20th century, much was destroyed. Through these photos, we can see shadows of what was lost. 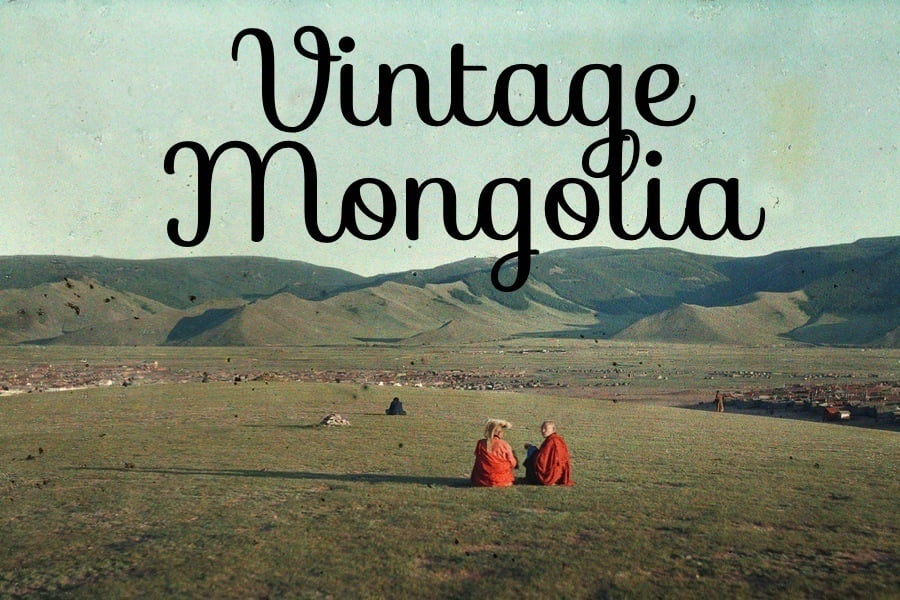 This is the world the Soviet’s shattered. Image source: yeeyan.org 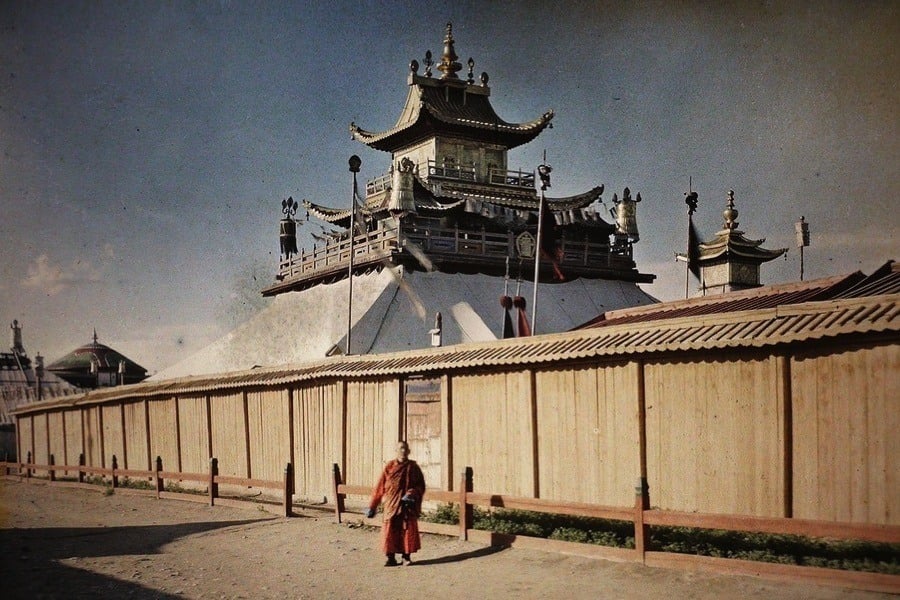 An orange-robed monk walks past a temple in what was called Khuree and is now Ulaanbaatar, the capital of Mongolia. Source: wikimedia.org 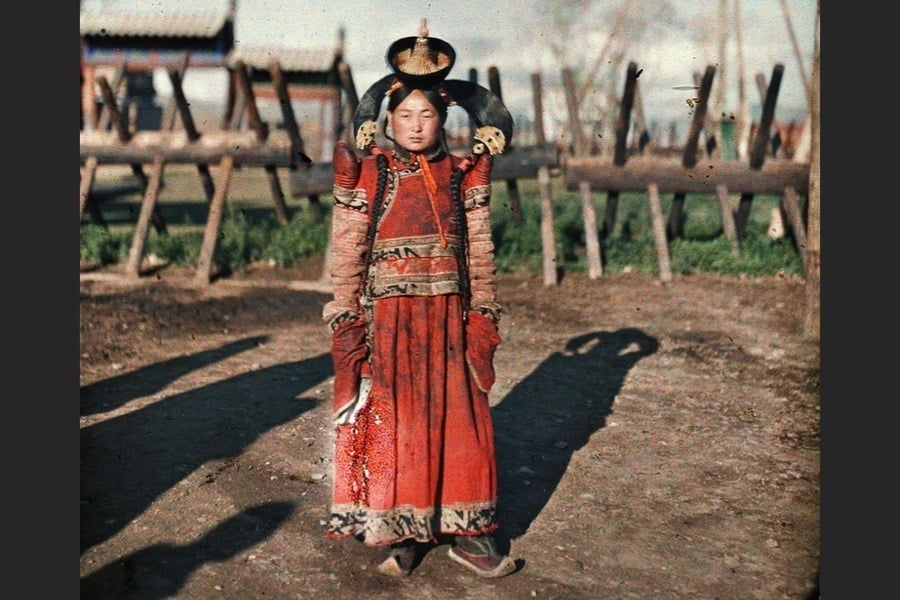 The woman in this 102-year-old photo wears traditional dress that signifies she is married and part of the Mongolian nobility. Source: wikimedia.org 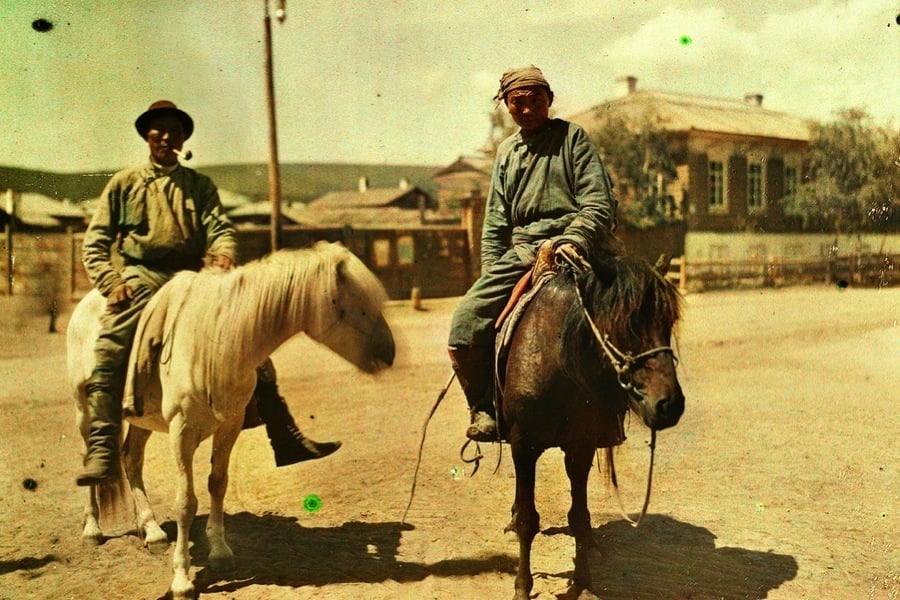 Mongolian riders near the Russian border in the early 20th century. Source: yeeyan.org 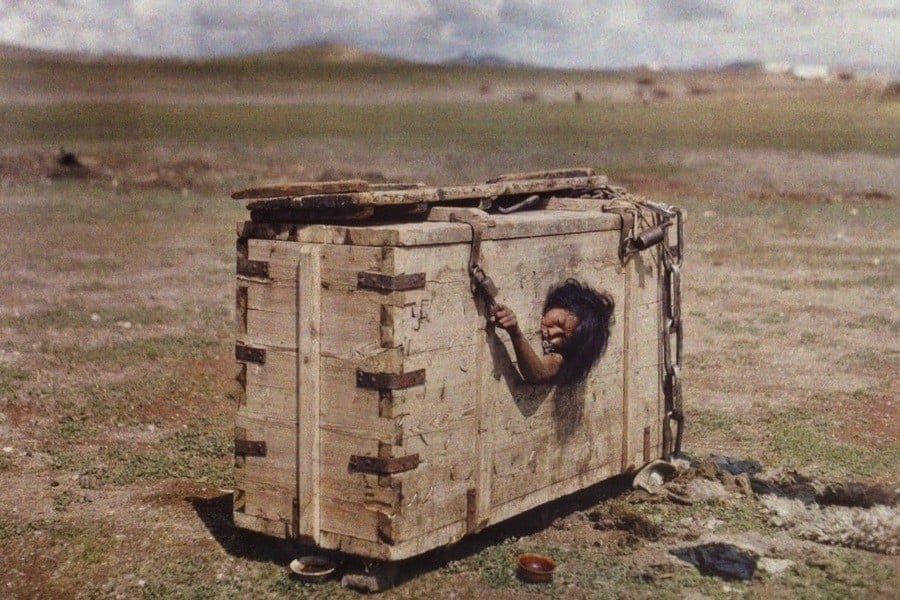 Despite the flourishing Buddhist monastacism, pre-Soviet Mongolia had plenty of cruelty, including this form of “portable prison.” Prisoners were sometimes left in such boxes to starve. Source: wikimedia.org 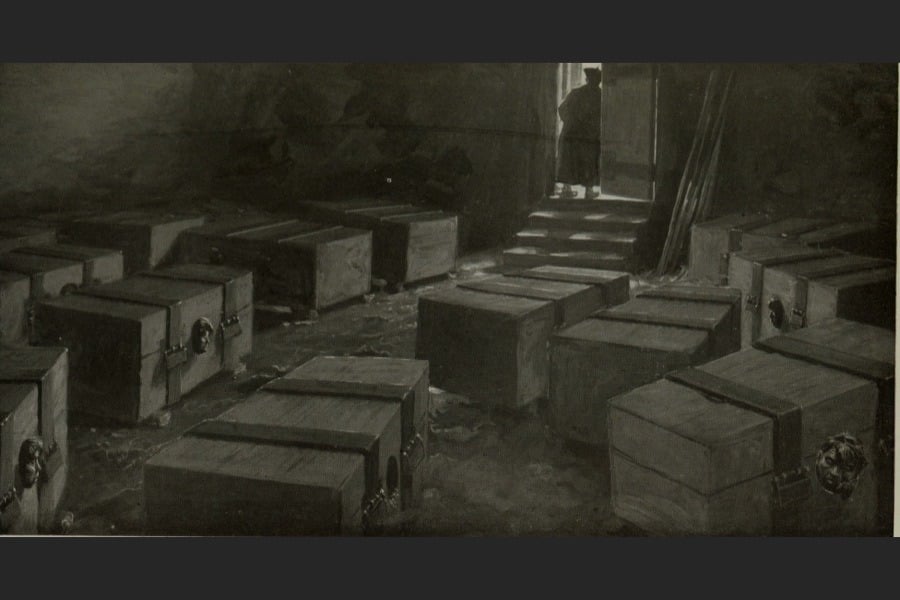 This is a sketch of the same form of treatment included in Beatrix Bulstrode’s book A Tour in Mongolia. Though they were fed, these prisoners were condemned to life-sentences inside these four-foot-long boxes. Source: library.upenn.edu 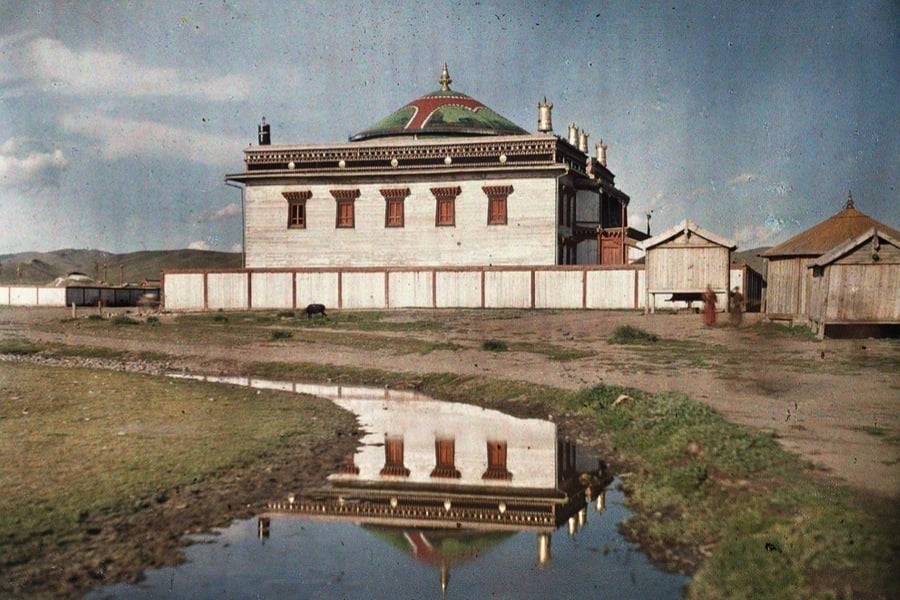 This 1913 photo shows exactly the kind of monastery destroyed by Joseph Stalin and his forces during the purges in the 1930s. Source: wikimedia.org 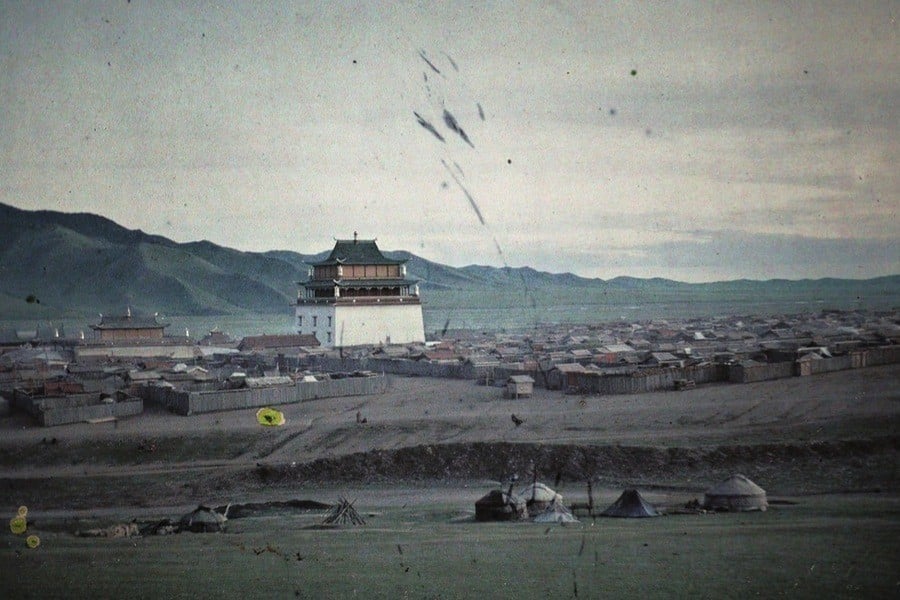 Built in 1809, the Gandantegchinlen Monastery still stands in Ulaanbaatar, though it is now surrounded by concrete apartment blocks and office buildings. Source: wikimedia.org 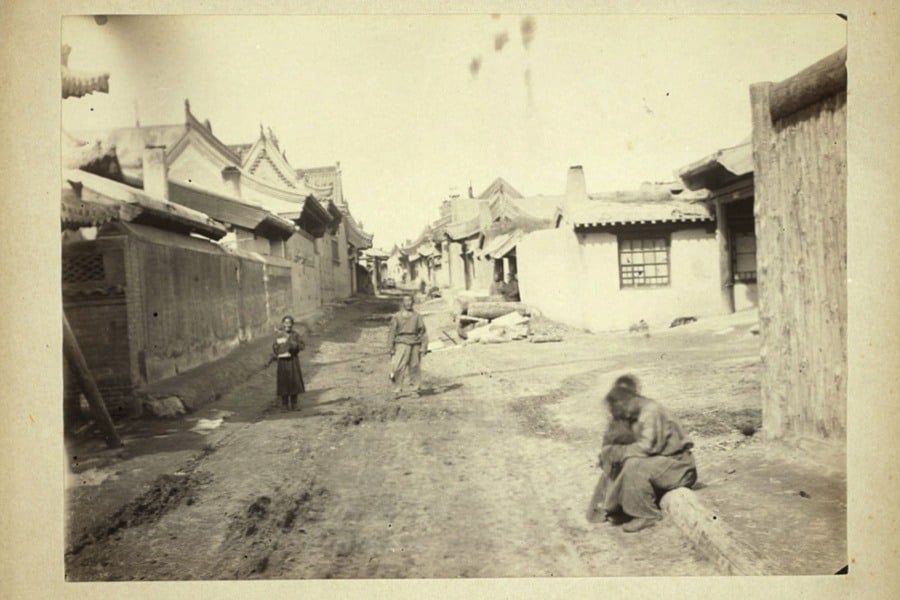 This photo, showing a street scene from 1885, comes from the scholarly papers of George Kennan, an American diplomat and Soviet scholar. Source: loc.gov 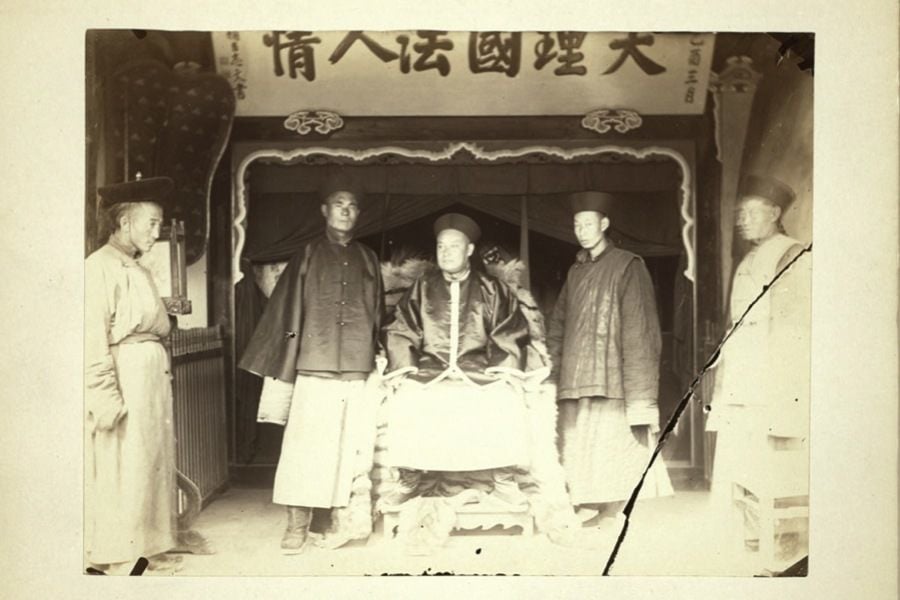 A Chinese governor of a northern Mongolian province holds court near the end of the 19th century. Source: loc.gov 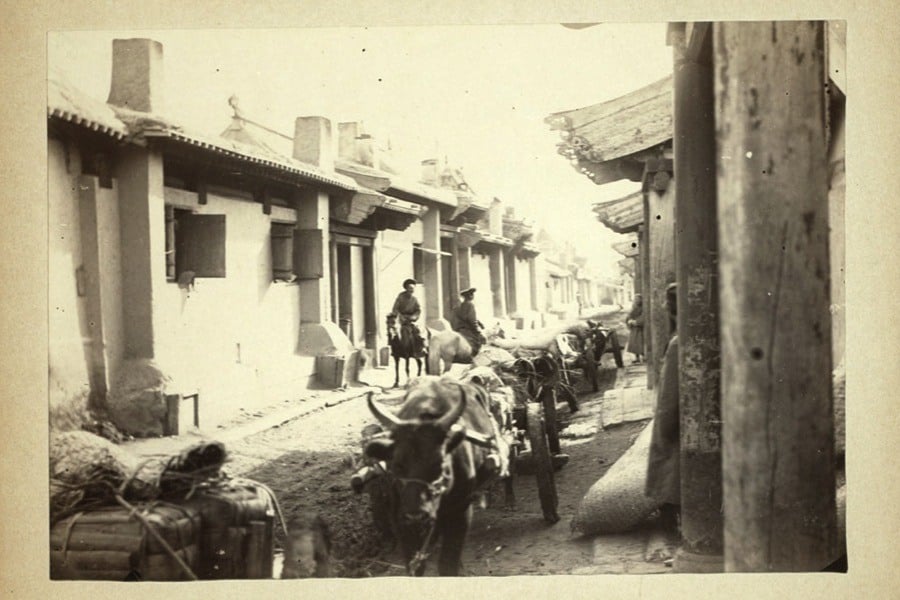 A caravan of oxen drags supplies through a city street. Source: loc.gov 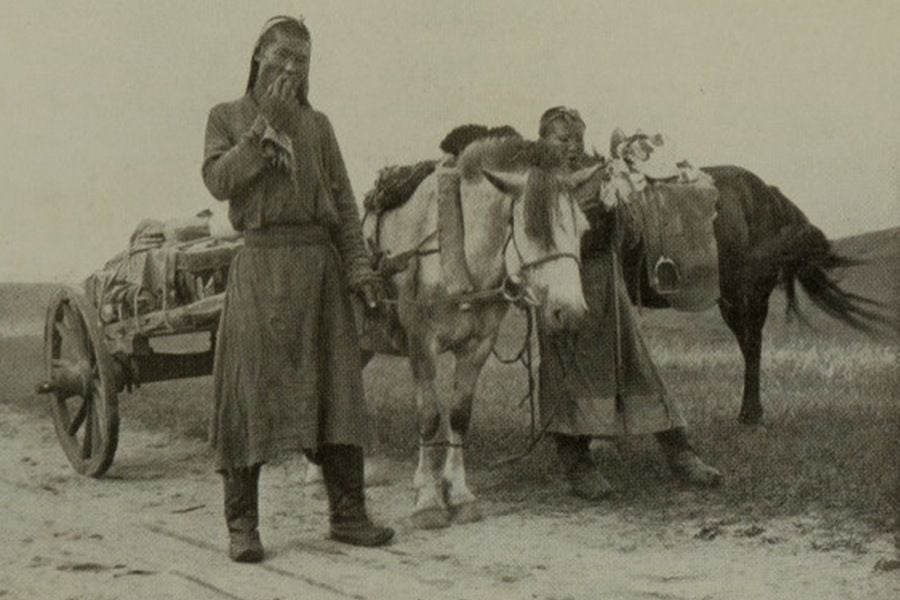 Beatrix Bulstrode, a British woman, snapped this photo of Mongolian traders during her journeys through the country between 1913 and 1919. Source: library.upenn.edu 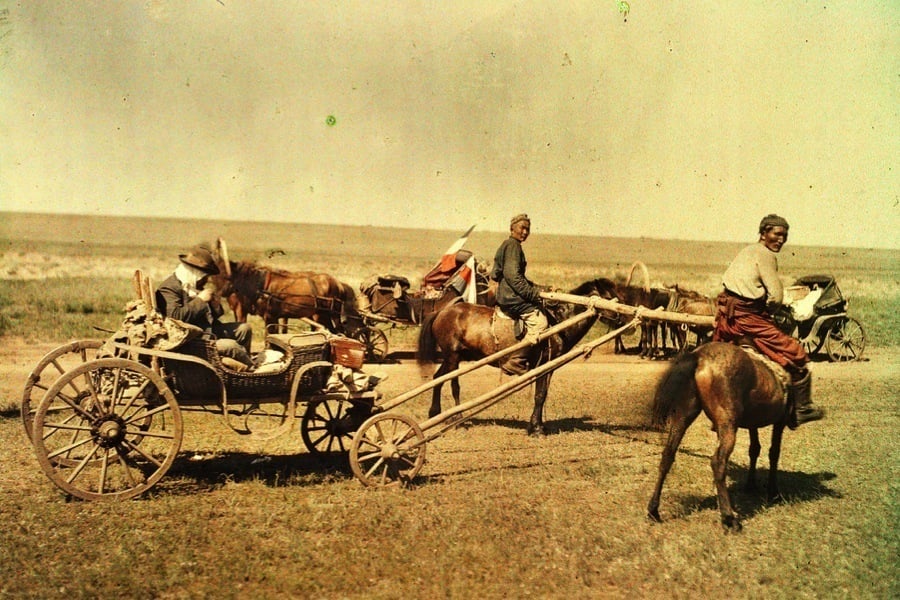 These two riders drag a small VIP wagon behind them across the steppe. Source: yeeyan.org 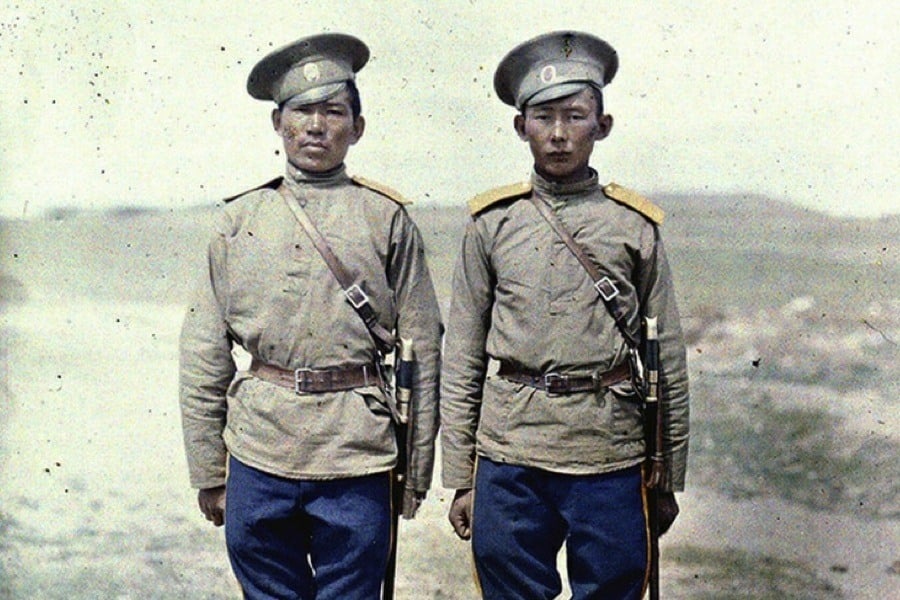 These are two Mongolian soldiers as photographed in 1913. Source: yeeyan.org 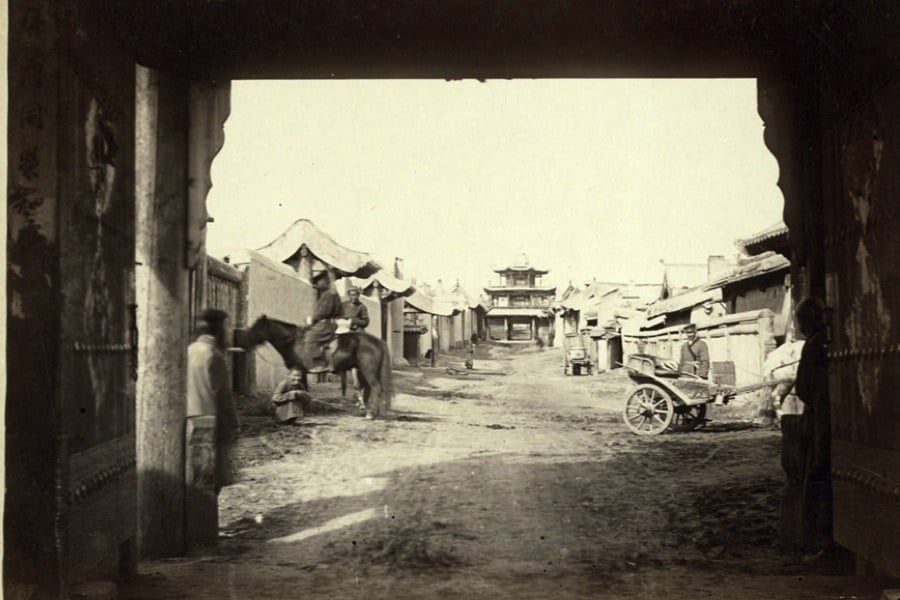 This shot from around 1885 shows a trading post near the Mongolia-Russia border. Source: loc.gov 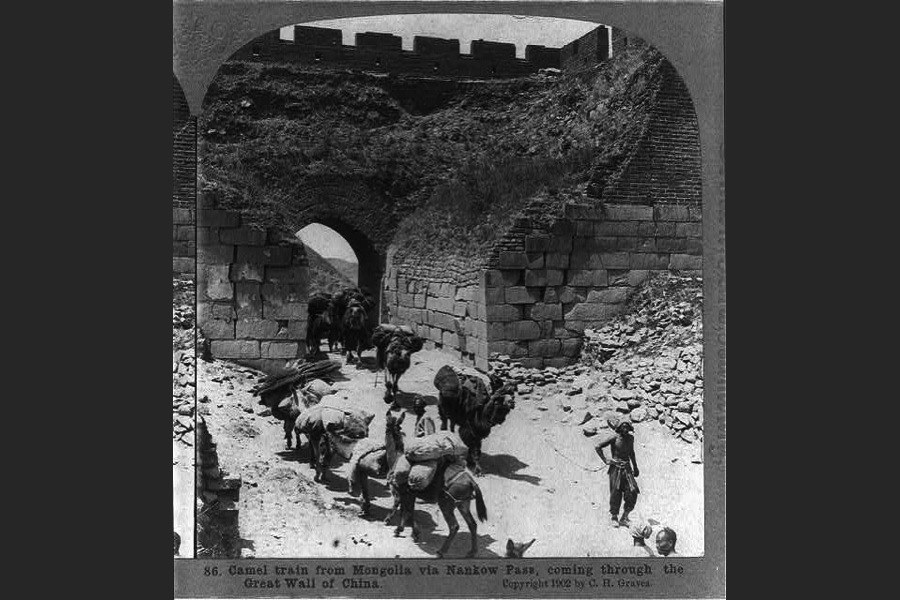 Here, on the opposite side of the country, Mongolian merchants cross into China through a gate in the great wall. Source: loc.gov 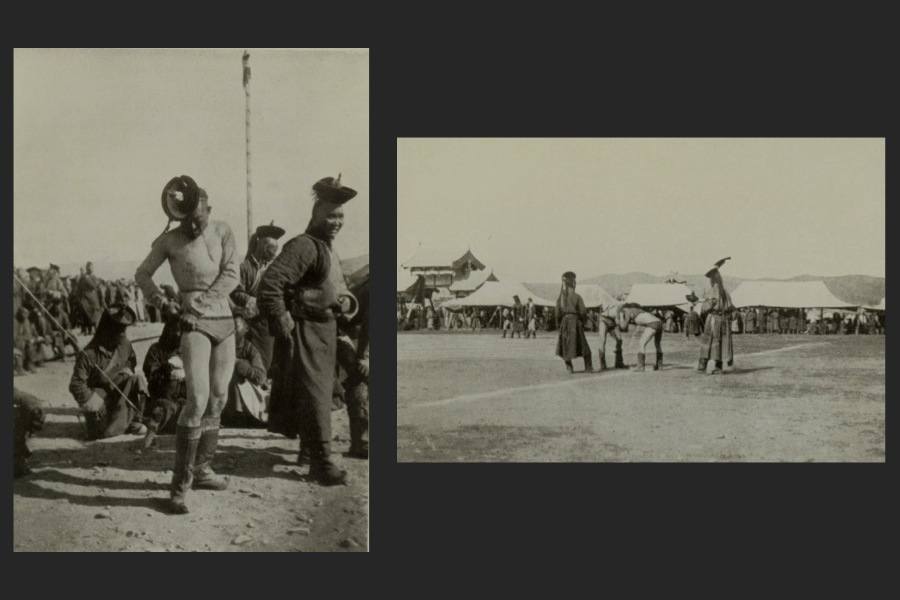 Here, as photographed by Beatrix Bulstrode, are Mongolian wrestlers participating in a festival one century ago. Source: library.upenn.edu 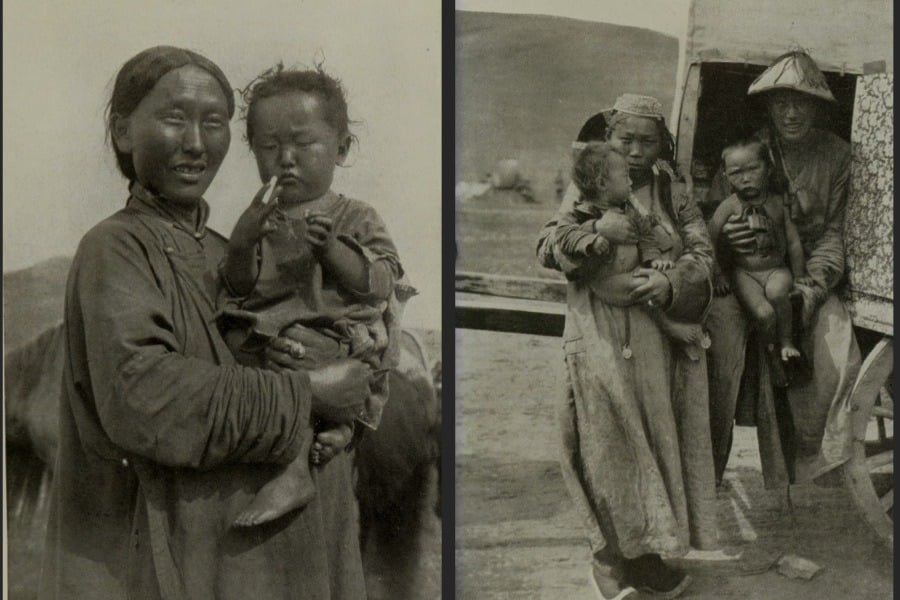 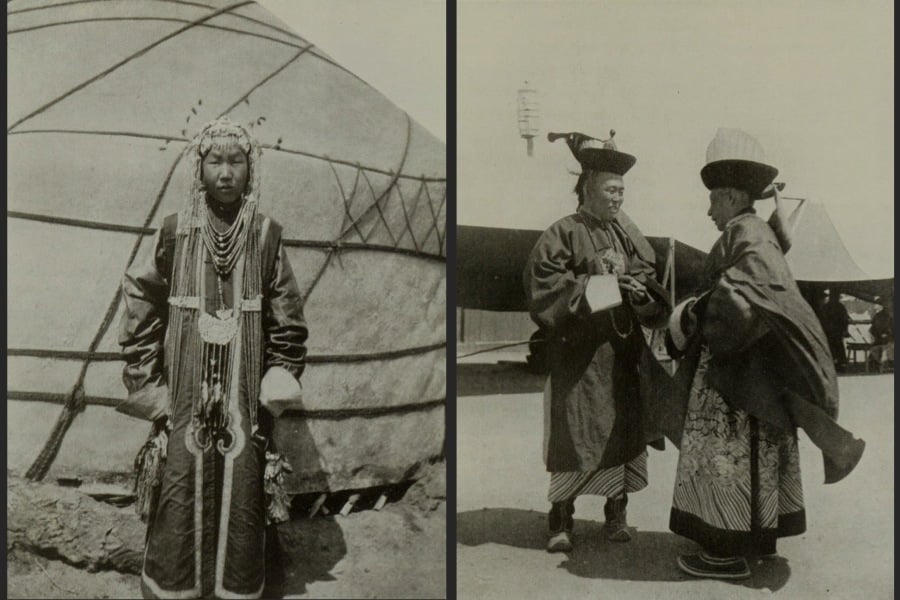 A Mongol bride (left) stands in front of a ger. A lama and a Mongolian prince (right) greet each other near a temple in the capital. Source: library.upenn.edu 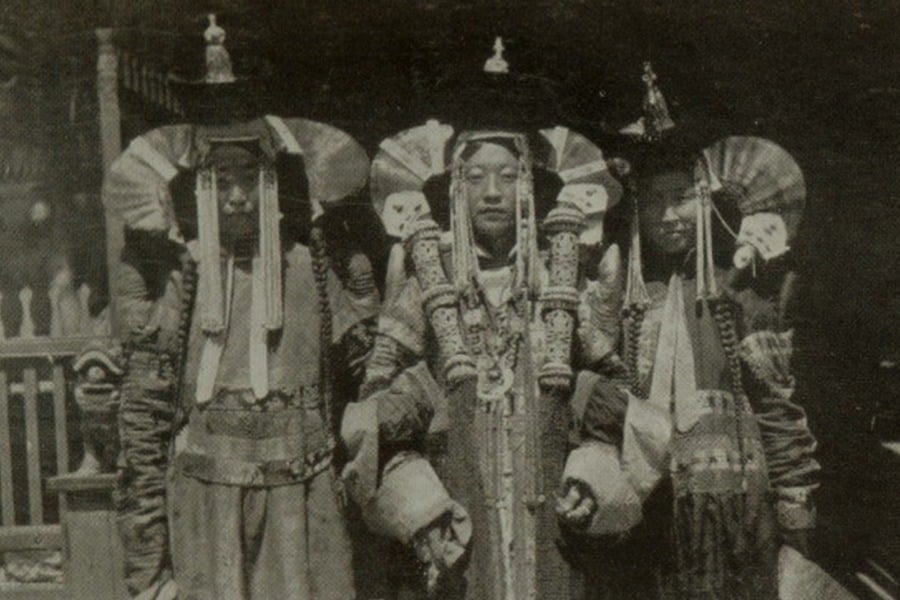 Three women pose for the camera after making offerings at a Buddhist temple outside the capital city. Source: library.upenn.edu 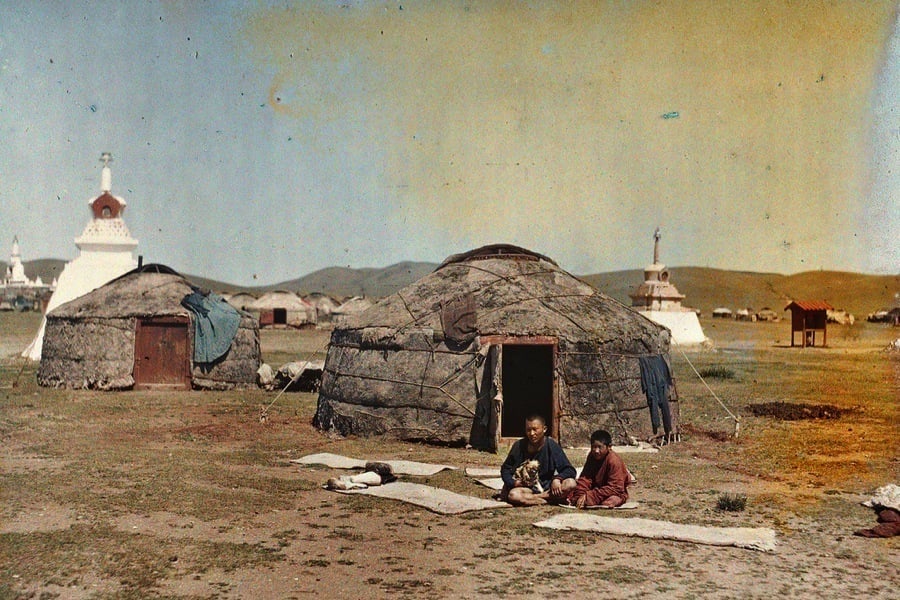 Two boys sit on animal skins outside of a traditional ger. Source: wikimedia.org 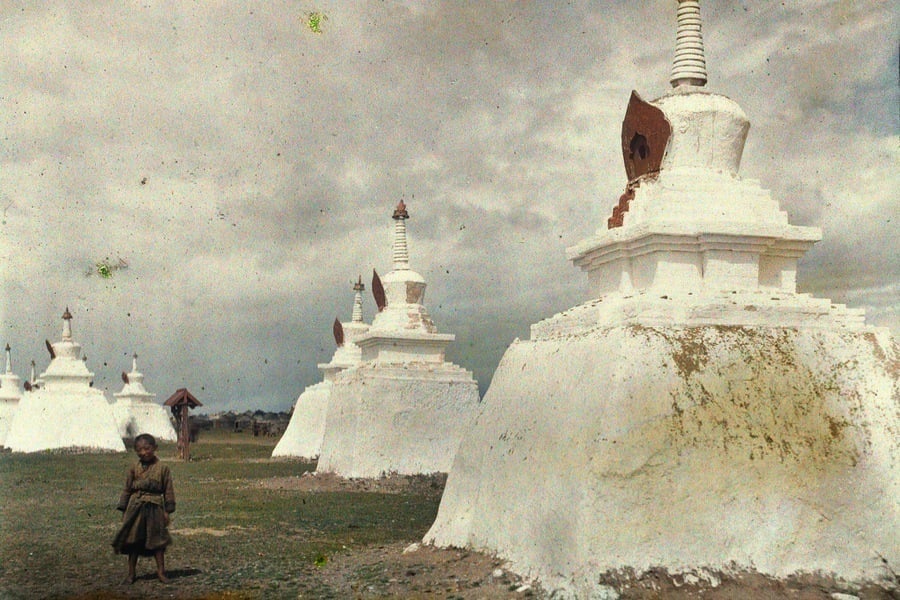 A tiny monk stands near a stupa, which is a holy Buddhist reliquary. Source: yeeyan.com 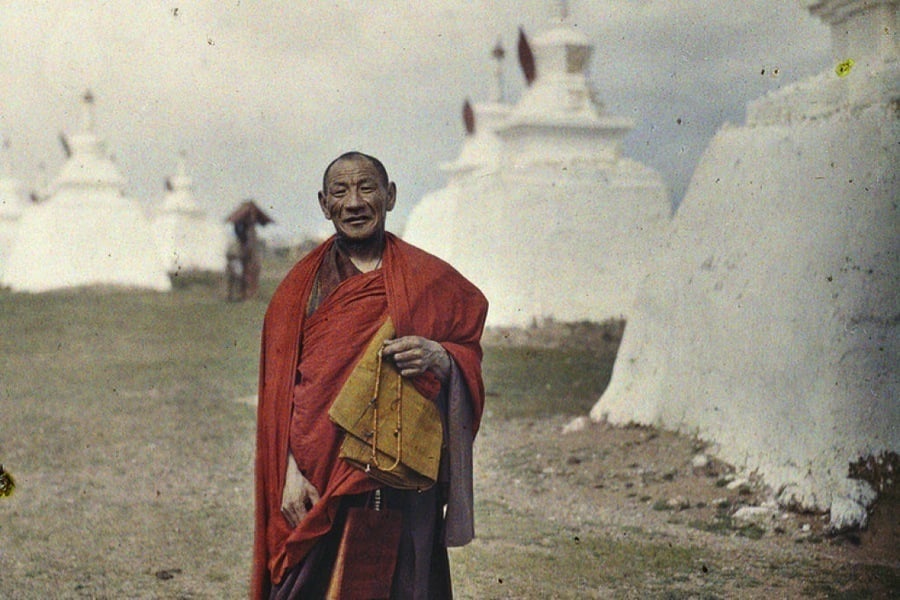 A much older monk stands for a picture in the same location. Source: yeeyan.org 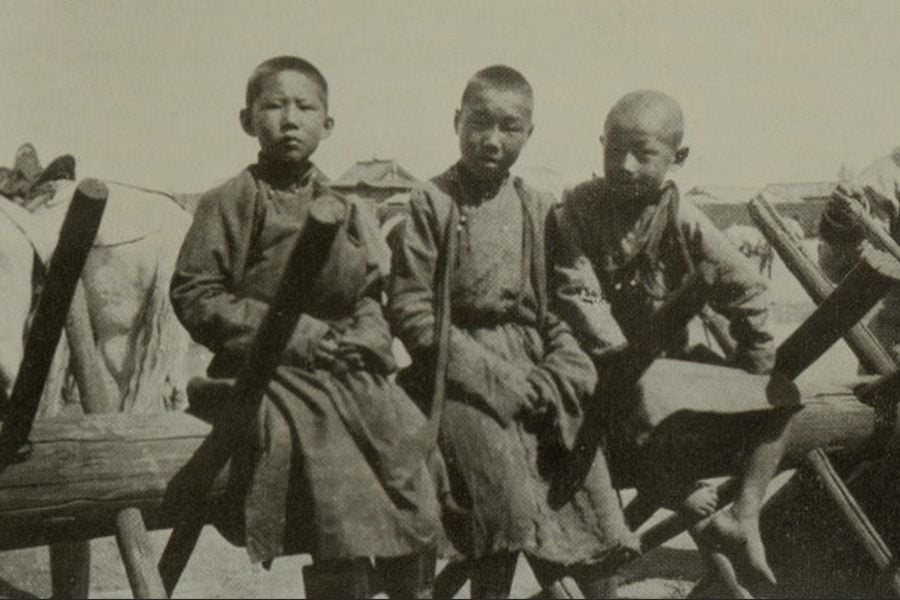 Young monks sit on a barricade near Mongolian capital in the early 20th century. Source: library.upenn.edu 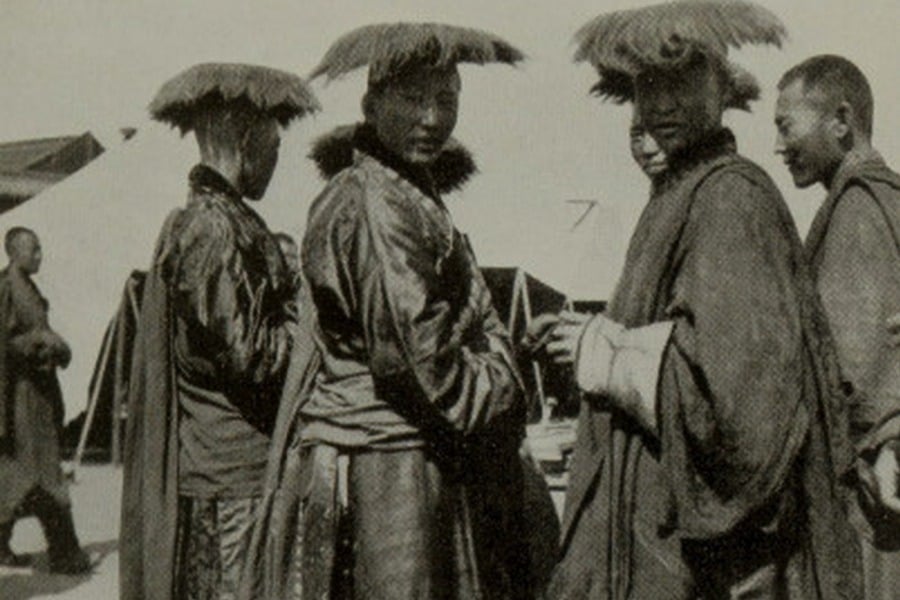 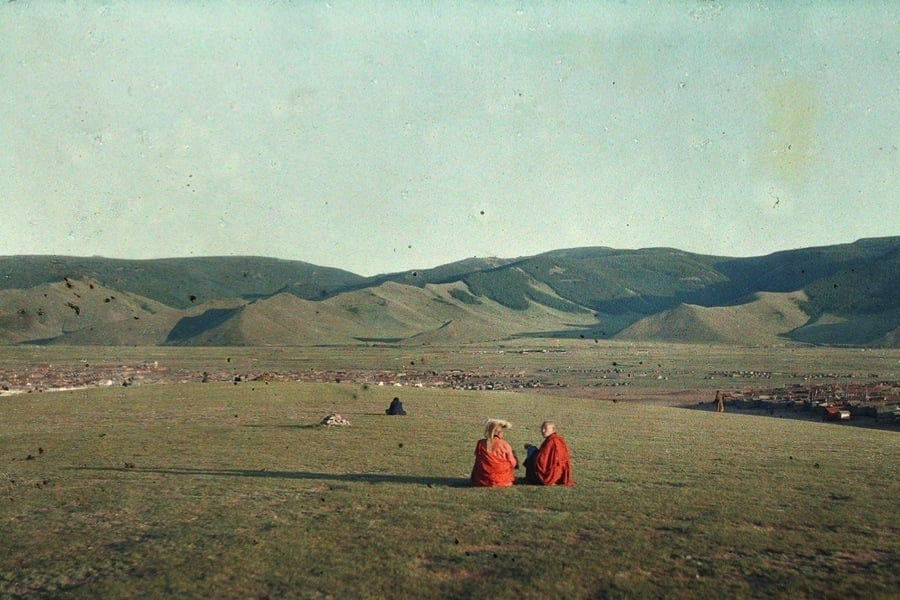 Two monks sit in the open plains outside the capital.