The giant opah, also known as a "moonfish," was reeled in about 80 miles off the Virginia Beach coast. 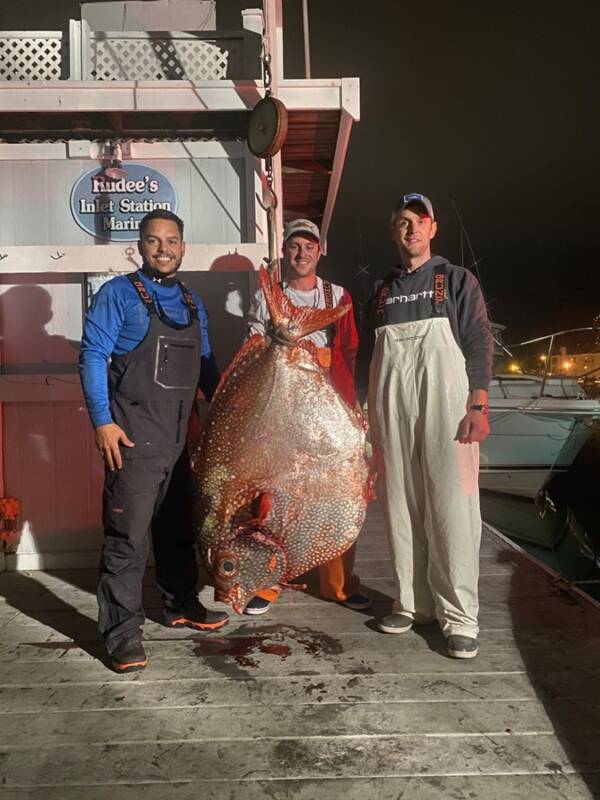 A group of fishermen sailing near Norfolk Canyon, about 80 miles off the Virginia Beach coast, reeled in the catch of a lifetime: a rare deep-sea opah.

According to local news outlet WAVY, fishermen Jon Wetherington, Michael MacTaggart, and Nick Kemp had been sailing around the area for a few hours in search of a swordfish. As it turns out, they ended up catching something even more incredible.

The group had nearly given up for the day before they felt a tug on the line. As they operated the hand-crank rod, their catch came into view. They couldn’t believe what they were seeing. The opah they hooked weighed an impressive 143 pounds and had striking bright orange and red coloring.

“They start yelling ‘opah’ and I think ‘what are these clowns talking about,'” Wetherington recalled. But their guesses were spot on as they reeled the rare giant opah fish onto their boat. It took them 45 minutes to secure the fish.

“It was definitely a surreal moment for all of us,” said MacTaggart, who shared that the area’s depth went down to about 6,000 feet below the ocean surface. 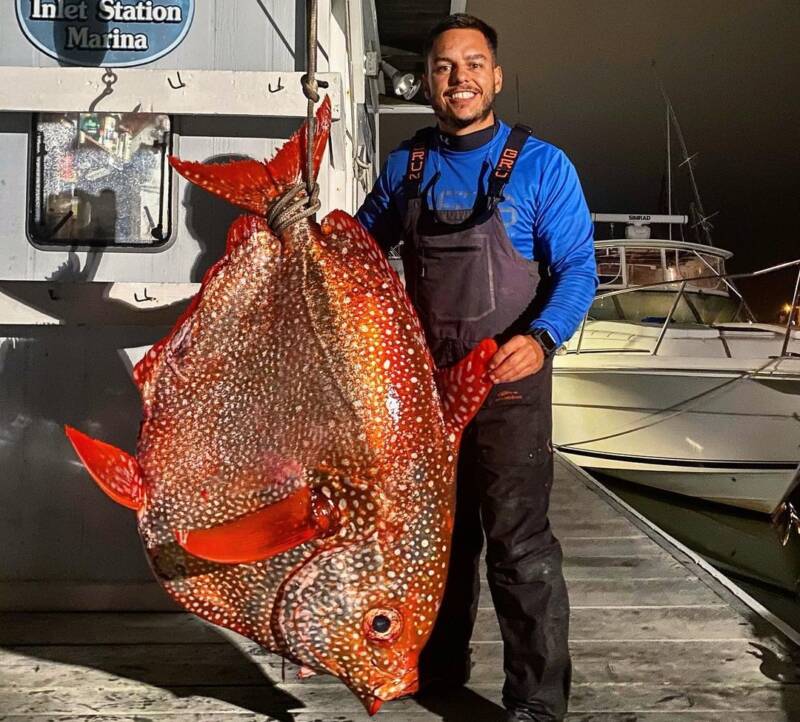 Michael MacTaggart posing with the giant opah also known as a “moonfish.”

According to the National Oceanic and Atmospheric Administration, this deep-sea fish species is also known as the moonfish, not to be confused with the even more massive ocean sunfish. Much of what is known about this fish is mostly guesswork since there haven’t been enough studies on it.

Scientists believe opah (Lampris guttatus) share general traits with other Pacific Ocean pelagic fish, which are species that inhabit the middle column of the water. They are enormous fish and likely have a rapid growth spurt. It’s uncertain how long their life span is, but scientists use their fin rays to estimate how old each individual fish is.

Opah fish caught on longline fisheries usually range from one to six years old. These fish average 100 pounds in weight, making the fishermen’s catch well over the standard-size fish. Still, the opah fish is a rare sighting even among those who spend their days out on the water.

“When it happened, we hit all the other boats up on the radio and I think even they thought we were wrong,” Wetherington said.

As The San Diego Union-Tribune reports, the opah fish has long been a cherished catch among fishermen in Hawai’i. It is considered good luck and commonly given as a goodwill gift rather than selling it. 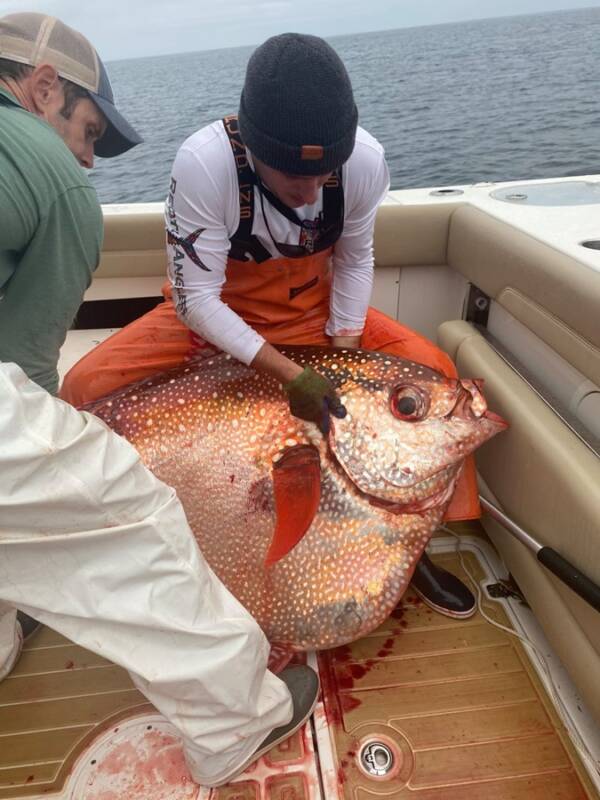 The opah fish has become an increasingly popular item on seafood menus, particularly in restaurants around California where a steady population of opah fish has been found off the state’s coastline.

“It’s the best fish that nobody knows,” said Tommy Gomes, whose work with the Catalina Offshore Products involves educating public consumers about this little-known fish. “If you don’t educate people about the different cuts, they won’t know how to cook them.”

According to Gomes, opah tastes great every way that it’s prepared, from sashimi to stir-fry. The versatile fish is listed as a species that is sustainably managed and responsibly harvested under U.S. regulations, according to NOAA, making it a more responsible and affordable choice for consumption.

Based on records from the International Game Fish Association, the current world record for an opah catch is 180 pounds. But that has not deterred the Virginia group’s excitement. The fishermen are also waiting to determine if their rare catch is in fact the first opah ever caught off the Virginia coast.

“This is just a piece of the dream,” Wetherington said. “It could’ve happened to anybody but it happened to us so we take that as a win.”

Next, read about how scientists accidentally created a hybrid “sturddlefish” inside the laboratory and then meet the arapaima, the Amazon “river monster” that has survived for 23 million years.