Meet The Arapaima, The Amazon ‘River Monster’ That Has Survived For 23 Million Years

Also known as the pirarucu or paiche fish, the arapaima is a massive air-breathing fish native to the Amazon Basin in South America.

If you’ve played Nintendo’s Animal Crossing: New Horizons video game, you’ll have likely met an impressively large fish with red-and-black coloring called the arapaima. While animals featured in the game are based on real living creatures, the massive size of the arapaima makes it almost unreal.

The arapaima, or pirarucu fish, is a giant fish that has existed for 23 million years. Not only is it one of the oldest living species in the world, but it’s also one of the largest freshwater fish.

Here’s everything you need to know about this ancient monster fish. 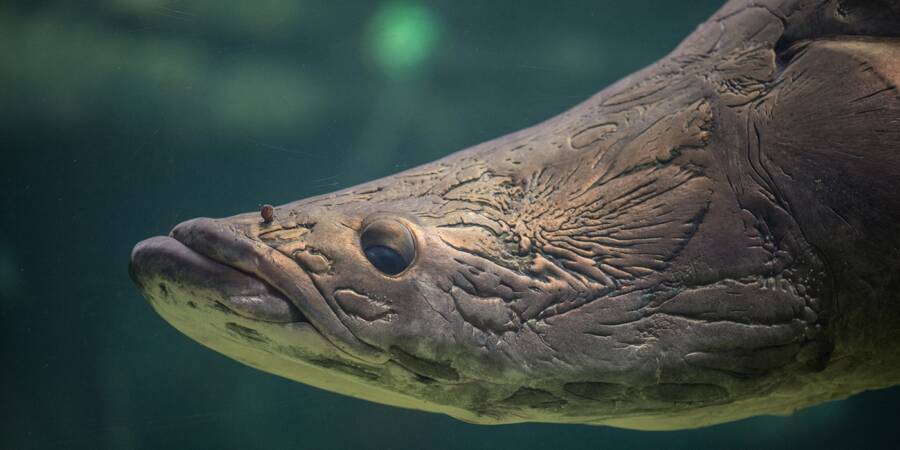 Smithsonian’s National Zoo and Conservation Biology InstituteOne glance at the arapaima and you’ll have the uncanny sense that you’re looking at a living fossil.

The arapaima has been on Earth for at least 23 million years, which is why the gigantic fish species has been dubbed the “dinosaur fish” — even though these aquatic creatures didn’t co-exist with dinosaurs. Until 2013, Arapaima gigas was believed to be the only species of this ancient fish, but several other species have since been discovered.

The arapaima has an antediluvian face and an enormous scaled body which can reach gargantuan sizes for a freshwater fish. The largest arapaima on record weighed over 440 pounds and measured 15 feet long, but the average fish typically grows up to 200 pounds and is 10 feet in length.

Not only are they among the oldest living freshwater fish in the world, but they are also one of the largest known to humankind. Their native habitat is the Amazon River, which runs through Brazil and Peru, and the Essequibo River that cuts through Guyana.

To the people of Peru, the arapaima is known as the paiche fish while in Brazil it is called the pirarucu fish, a word derived from the native language of the Indigenous Tupi people. For centuries, the arapaima has been an important source of protein to the Indigenous tribes who hunt it for food. 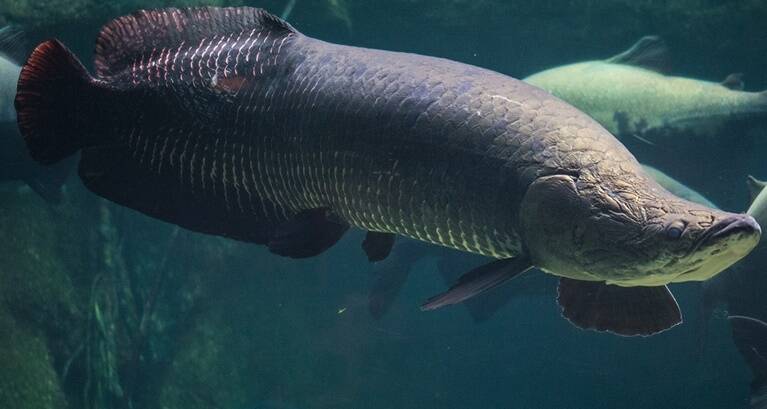 The arapaima’s tough scales give it a natural body armor strong enough to withstand attacks from a shoal of piranhas in a feeding frenzy.

In addition to the arapaima and the piranha, more than 3,000 freshwater fish species can be found in the Amazon River and many more are suspected to remain undiscovered.

With its indomitable size, the arapaima was the top predator of the Amazon waterways for a long time — that is, until humans arrived on the South American continent. The arapaima’s need to surface for air makes it vulnerable to spearing, a weakness that has caused the species to be knocked from its top spot in the food chain.

A Fish That Breathes Air 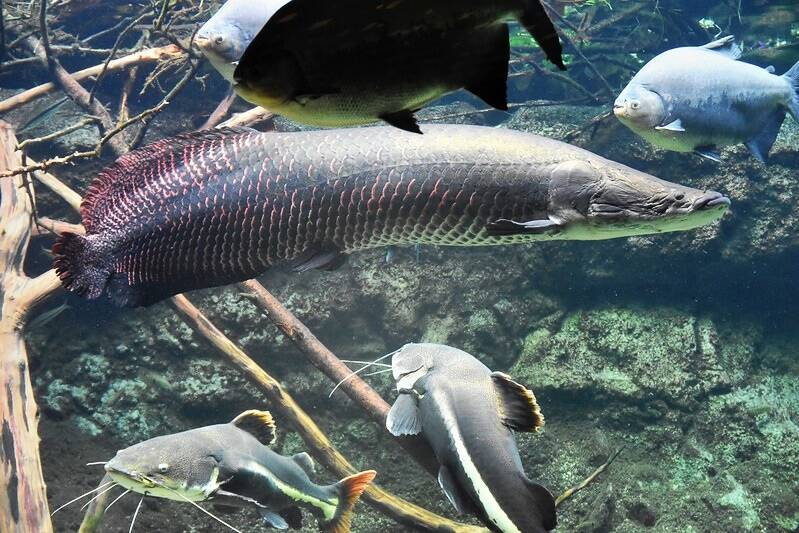 jpellgen/FlickrTheir unique breathing ability allows them to survive outside of water for 24 hours.

Besides its girth and appearance, what sets the Arapaima gigas apart from most fish is its need to breathe air.

Fish typically take in oxygen present in water and filter it into their cardiovascular system through a set of gills. But the arapaima’s gills are so small that they need to surface for air about every 10 to 20 minutes. They suck in air using a modified swim bladder that opens in the fish’s mouth and essentially functions like a lung.

This ability is especially important in the aftermath of a flood when arapaimas can be flushed out of rivers and trapped in landlocked pools. Most fish would quickly die given such pools’ low oxygen levels, but low oxygen is no obstacle for an arapaima. In fact, the arapaima can survive for as long as 24 hours entirely outside of water. 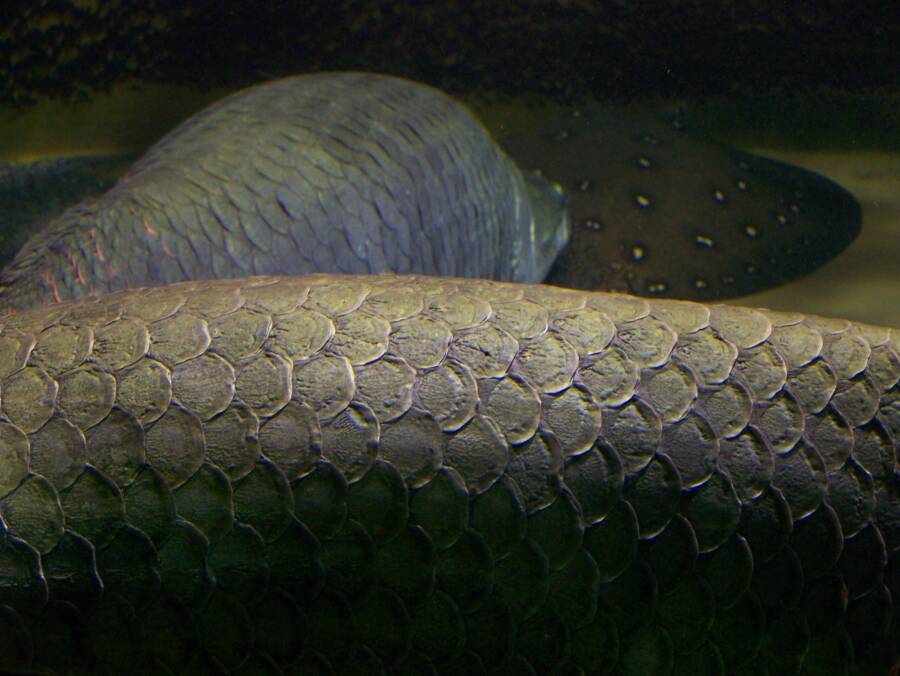 Wikimedia CommonsTheir body is covered in a thick natural armor that can even block bites from piranhas.

Arapaima fish eat mostly smaller fish but have also been known to eat birds, insects, fruits, seeds, and even small mammals that wind up in their watery habitat. To feed, they use a “gulper” technique which involves opening their large mouths to create a vacuum that pulls in food.

Furthermore, their ability to adapt to low-oxygen waterways gives them an advantage over smaller fish that have to slow down due to the diminished supply of oxygen. Sharp teeth allow the arapaima to thoroughly shred its prey. 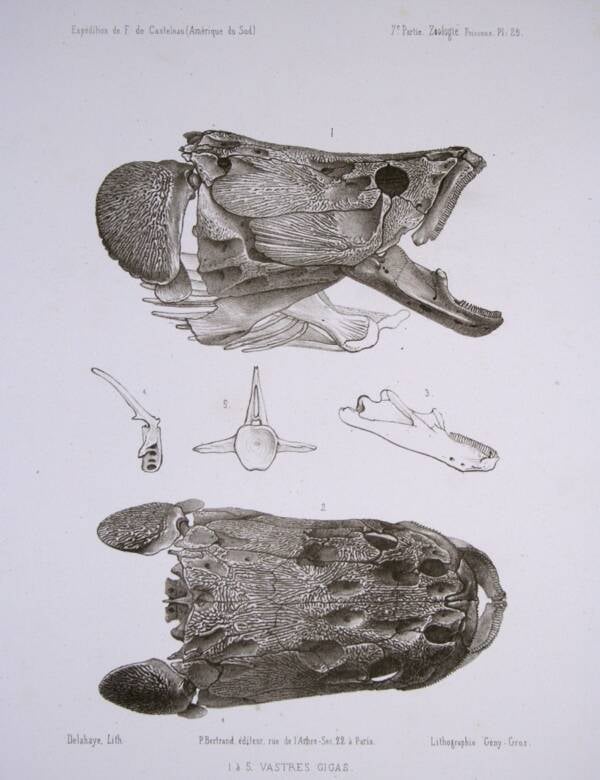 The arapaima breeds during the dry season between February and March, when they lay thousands of eggs in hollowed-out nests in the sand. It’s believed that the males use their mouths as incubators during the emergence of potential threats.

These eggs hatch by the start of the wet season, which is an ideal time for these baby fish, or fry, to learn to gather food. Once grown, this massive fish can live up to 20 years.

Unfortunately, recent scientific studies have found that the arapaima fish has already gone extinct in certain parts of the Amazon basin due to overfishing. The threats faced by the arapaima roused governments and local populations, such as the residents of Rewa village in Guyana, to actively protect these animals. 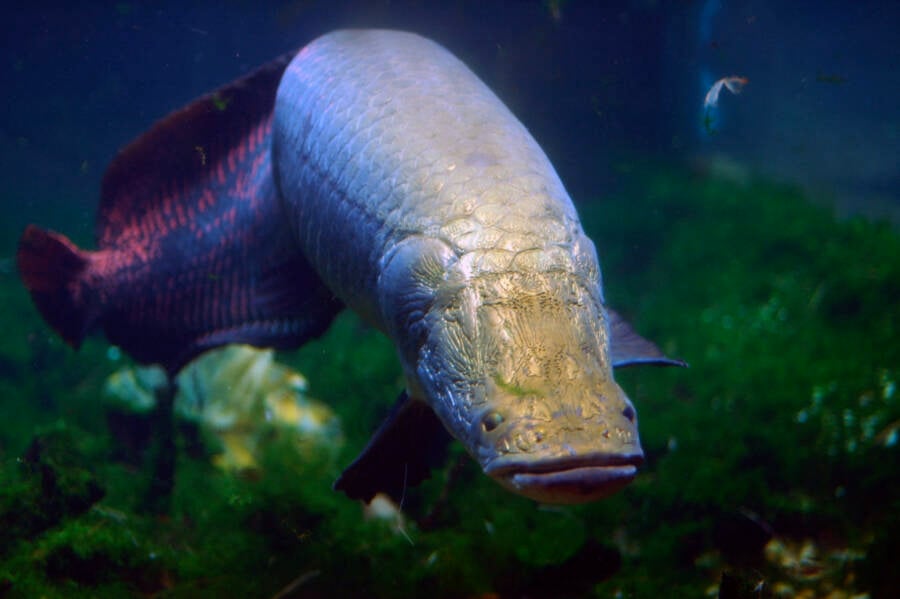 Jeff Kubina/FlickrThe arapaima has disappeared from some parts of the Amazon basin but remains protected in others.

“For many years they overfished arapaima for income. They began seeing fewer and fewer arapaima and realized they were threatening their natural resources,” said conservation biologist Lesley de Souza, referencing Rewa village’s conservation efforts. “After a pledge to no longer harvest arapaima, they currently contain the highest density of arapaima in Guyana.”

The arapaima, she said, has become “a symbol of great pride” for many locals, who now work with researchers to protect the fish. Because of this changed approach, the paiche fish is still thriving in areas of the river basins where strict regulations have helped slow down its decline. 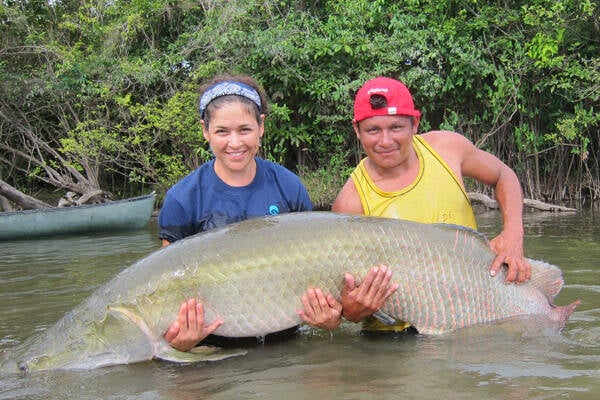 Researchers have teamed up with locals to put tags on these giant fish so that their migratory routes can be studied. Working with Indigenous communities is also beneficial for researchers who are trying to learn more about the mysterious fish’s biology and behavior. Who better to learn from than the people that have coexisted with the arapaima for millennia?

“Working closely with Indigenous communities I have heard many anecdotal accounts of undocumented arapaima behavior,” de Souza said. “This is certainly a gap we need to fill in arapaima research.”

Now that you’ve read about the arapaima “dino fish,” check out the incredible mola-mola, the floating fish the size of a rhinoceros. Then, learn about the rediscovery of the coelacanth, the 400 million-year-old fish species everyone thought was extinct.