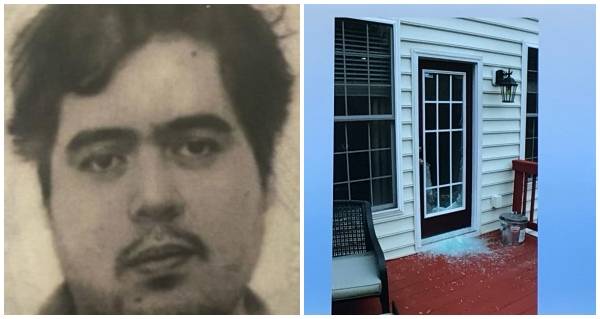 CBS 6Skinner shattered a glass door in an attempt to get inside.

On June 21, in front of the basement door of a Goochland, Va. home, Troy George Skinner told a woman on the other side that he had hitchhiked 30 miles and needed help.

The truth was Skinner had actually arrived via Greyhound bus from Washington, D.C. And to get to Washington D.C., he had taken three flights – from New Zealand to Australia, to Los Angeles, to D.C.

The truth was, the 25-year-old from New Zealand showed up at that particular house because a 14-year-old girl he had met online lived there, according to Sheriff James Agnew of Goochland County.

Agnew said Skinner and the girl met three or four months prior through an app called Discord, which allows video gamers to chat with each other, and that the girl had been trying to end communication.

When the woman inside the house, who is the girl’s mother and remains unidentified, didn’t let Skinner in, things escalated.

“He got a brick and attempted to break that door down,” Agnew said. “This 6-foot-1-inch, 275-pound man attempted to violently get inside her house.”

The mother, who was painting with one of her two daughters in the basement at the time, locked the door at the top of the basement after they had run upstairs.

But Skinner reappeared on the back deck. The girl’s mother warned him that she was armed with a handgun, but he persisted. He threw a landscaping stone through a glass door and attempted to unlatch the lock inside. That’s when the mother fired twice, hitting Skinner in the neck.

By that time, police had already received a call about a man dressed in black attempting to break into the house.

Skinner collapsed in a nearby yard as he was trying to flee.

Investigators found on Skinner his New Zealand driver’s license, his plane ticket from Auckland, and his bus ticket from D.C.

Authorities said that Skinner had pepper spray in his pants pocket and duct tape in his backpack. He also made a stop at Walmart on the way to the house to buy a pocketknife.

“This was not spontaneous,” Agnew said during a news conference. “This was something very planned.”

Skinner was taken to the hospital and is expected to survive.

He’ll be charged with breaking and entering with a deadly weapon with the intent to commit a serious offense. Agnew also asked the F.B.I. to investigate further in order to decide if federal charges are warranted.

“He was not invited here, he was not expected here, he had been told in the past that the daughter no longer wished to communicate with him,” Agnew said.

“I’m so bewildered by what happened I can’t, I don’t know what was going through his head that was so outrageous,” said a friend of Skinner’s who wanted to remain anonymous. “Everyone who knows him is like, ‘What the hell has happened?’ This is so out of character. He’s got no history of drugs, no criminal record,” the friend added. “[He] may be a little aggressive but nothing really crazy.”

Next read about the nine-year-old thief who was arrested after an Alexa device recorded his voice. Then read about the off-duty cop who shot a crazed gunman near her daughter’s school.