‘I Am Going Mad Again’: The Tragic Tale Of Virginia Woolf’s Suicide

Virginia Woolf's suicide note revealed the sad reason why she drowned herself in England's River Ouse. But the full story behind her death is even more heartbreaking. 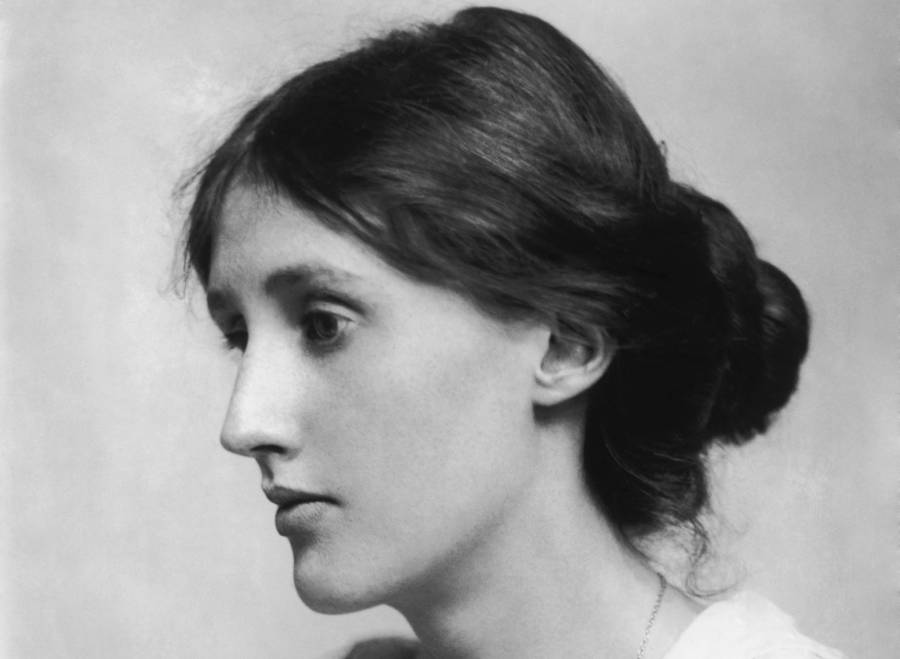 Wikimedia CommonsVirginia Woolf’s suicide note revealed the immense pain the writer was in before she took her life.

The works of prolific English writer Virginia Woolf continue to influence modern culture a century or more after they were written. And while her renowned novels like Mrs. Dalloway and feminist essays like A Room of One’s Own remain captivating to this day, so too does the story of Virginia Woolf’s suicide, when on an early spring day in 1941, she filled her pockets with rocks and walked into a nearby river.

But behind the tale of Virginia Woolf’s death is the haunting story of a woman who battled tragedy and mental illness for most of her life, ultimately succumbing to her own harrowing thoughts.

The Woman Behind The Tragedy

Her parents, Sir Leslie Stephen and Julia Stephen, were prominent figures in their London community. Both were writers themselves, with Leslie working as the editor of the Dictionary of National Biography and Julia penning a book on her profession, nursing.

Woolf and her sister, Vanessa, were first schooled at home in their father’s vast library. Soon enough, they both attended the Ladies’ Department of King’s College London. 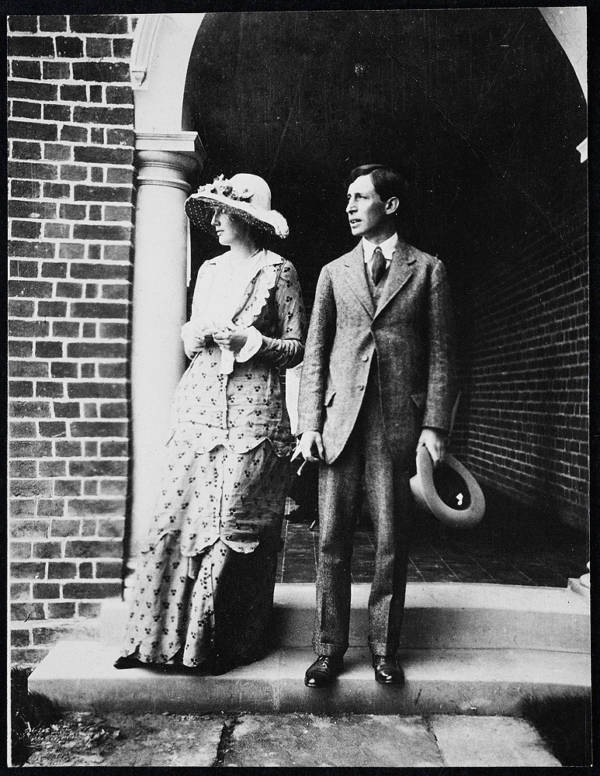 After graduating, Woolf fell swiftly into the world of literature, joining a circle of artists and intellectuals known as the Bloomsbury Group. This is where she met her husband, essayist Leonard Woolf.

Soon after their 1912 marriage, the couple bought a printing press, Hogarth Press, and published the works of writers such as Sigmund Freud and T.S. Eliot.

Woolf also started publishing her own writing, beginning with her first novel, 1915’s The Voyage Out. However, she didn’t reach true renown until her fourth novel, Mrs. Dalloway. Published in 1925, this novel tackled modernist themes such as feminism, mental illness, and homosexuality.

Woolf then published other notable and popular novels such as To the Lighthouse and Orlando, as well as feminist essays such as A Room of One’s Own and Three Guineas. All of these works led to her critical success as a revolutionary and prominent writer.

But, with several failed suicide attempts already behind her, it was clear that Woolf was not as well as her sharp writing and crystalline ideas might have suggested.

Virginia Woolf once said, “Growing up is losing some illusions, in order to acquire others.”

Woolf lost many of her illusions as a young child through instances of trauma. The first of these came when her half-brothers, George and Gerald Duckworth, began to sexually abuse her. In her personal essays, Woolf revealed that the abuse occurred from the time she was six up until she moved out of her family home at the age of 23.

While this sexual abuse most likely prompted many of her struggles with mental illness, her mother’s death in 1895 appeared to be what solidified them. Soon after, at the age of 13, Woolf had her first mental breakdown. 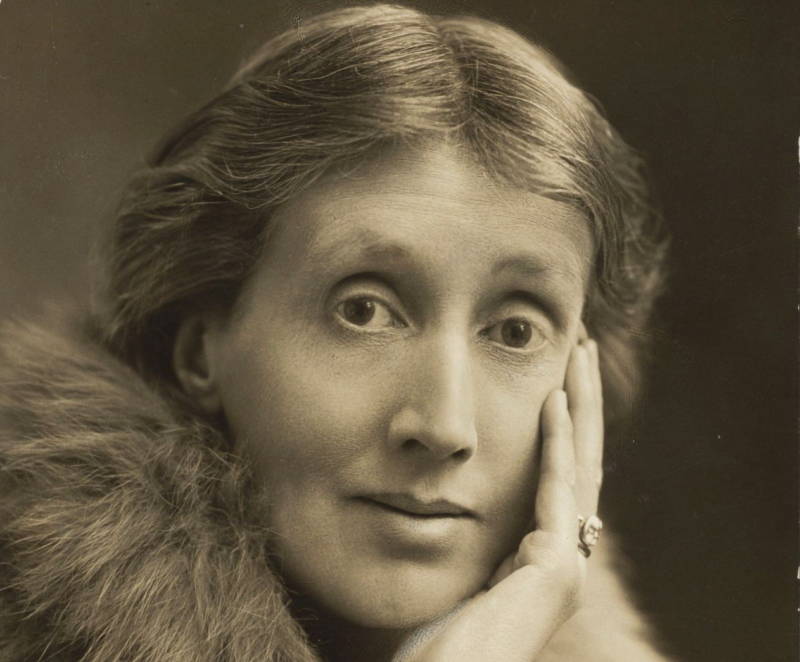 In the years following her mother’s death, Woolf experienced a succession of trauma. Her half-sister Stella passed away two years later and in 1904 her father died from stomach cancer. This soon led to Woolf being institutionalized for a brief amount of time.

Even after her writing success and happy marriage to Leonard, Woolf continued to deal with depression and mental illness. She made several suicide attempts throughout her life and suffered from hallucinations as well as periods of mania.

Woolf tried various psychiatric treatments, but because of the infancy of mental health research during her time, they had only negative results. One of these treatments even involved pulling several of her teeth out, a common medical theory in the 1920s that associated mental illness with dental infections.

On the morning of March 28, 1941, Leonard Woolf knew that something was not right with his wife of 29 years.

After speaking with her in her writing lodge outside of their Sussex home, he suggested that she go inside and rest.

This was the last time Leonard saw his wife alive. 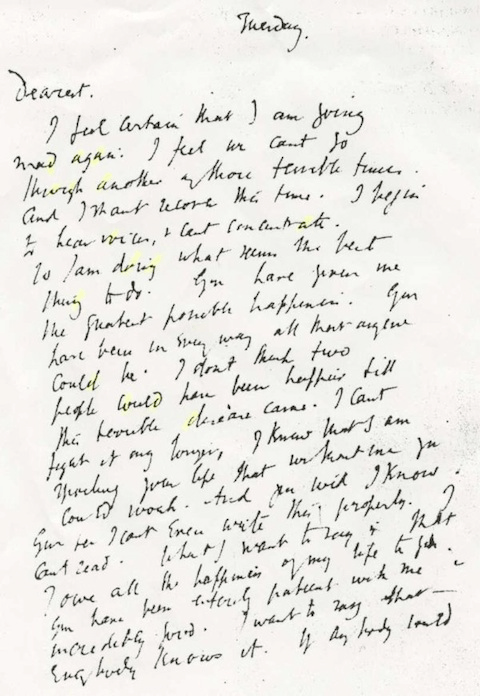 Wikimedia CommonsVirginia Woolf’s heartbreaking suicide note. It was the third such note she wrote before taking her life.

After Leonard went to his office, Woolf put on her fur coat and Wellington boots, exited the front gate, and made her way to the River Ouse next to their house. When Leonard went upstairs to check on her a couple of hours later, he found two suicide notes in the place of his wife. One was addressed to him, and the other to her sister, Vanessa.

Virginia Woolf’s suicide note to her husband read, “Dearest, I feel certain that I am going mad again. I feel we can’t go through another of those terrible times. And I shan’t recover this time. I begin to hear voices, and I can’t concentrate. So I am doing what seems the best thing to do.”

“What I want to say is I owe all the happiness of my life to you. You have been entirely patient with me and incredibly good. I want to say that — everybody knows it. If anybody could have saved me, it would have been you. Everything has gone from me but the certainty of your goodness… I don’t think two people could have been happier than we have been.”

Frantic upon reading Virginia Woolf’s suicide note, Leonard Woolf searched nearby for her. He soon found her footprints and walking stick on the river bank, but the water had already swept her body away. It would be found three weeks later, washed up near Southease, England.

When Virginia Woolf’s death was announced, T.S. Eliot wrote that it was “the end of a world.”

Following Virginia Woolf’s death, she was cremated and her ashes were sprinkled beneath the two Elm trees, nicknamed “Virginia” and “Leonard,” in the couple’s backyard. Leonard had a stone engraved with the last lines from her novel The Waves: “Against you I fling myself, unvanquished and unyielding, O Death! The waves broke on the shore.”

She left a novel and autobiography unfinished. Virginia Woolf’s suicide note would be her final piece of writing. 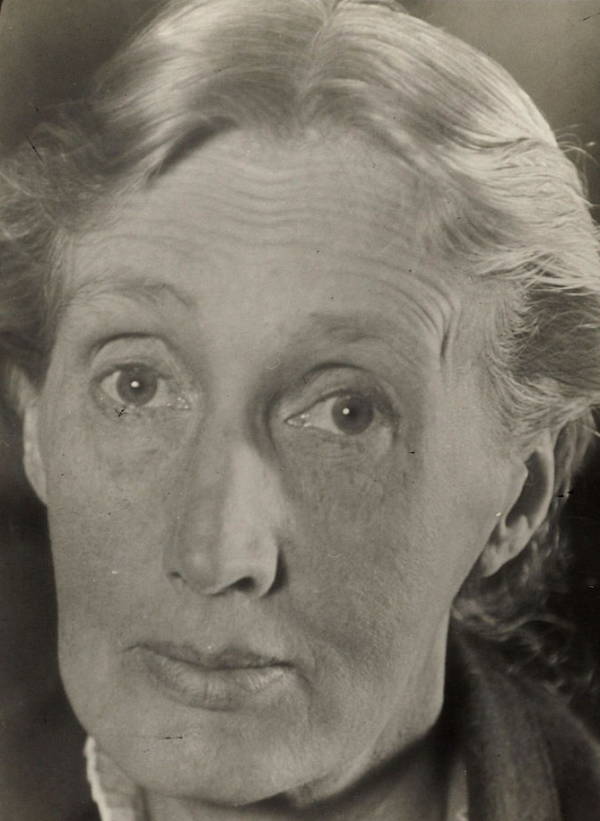 Woolf’s name and memory, however, have lived on. Her novels have become beloved classics, while her essays have turned her into a modern feminist icon. She was even immortalized in the Pulitzer Prize-winning novel The Hours by Michael Cunningham, with Nicole Kidman playing her in the film adaptation.

Furthermore, Virginia Woolf’s death also inspired a team of researchers to work on creating an app that could predict a person’s suicidal tendencies based on their writing.

By studying Woolf’s diary, which she kept throughout her lifetime, as well as her personal letters, the team hopes to create software that can analyze texts, emails, and social media posts of at-risk patients. When the app identifies a negative change in the writing of the patient, it will automatically alert a caregiver in time to intervene.

In this way, Virginia Woolf has left behind a legacy that is much larger than her life or death. As she once wrote, “When you consider things like the stars, our affairs don’t seem to matter very much, do they?”

Now that you’ve seen Virginia Woolf’s suicide note and read all about her death, discover the stories behind some more of history’s most famous suicides. Then, read about Japan’s haunting suicide forest.