What Killed The Dinosaurs? Inside The Catastrophic Mass Extinction Event

Though scientists have put forth several theories as to what exactly wiped out the dinosaurs, evidence suggests that an asteroid strike was the beginning of the end for the prehistoric creatures.

Millions of years ago, dinosaurs ruled the Earth. From the chicken-sized Compsognathus to the towering Apatosaurus, these prehistoric reptiles roamed all around the globe during the Mesozoic Era. So then, what killed the dinosaurs in such a sudden fashion?

Whatever it was, it also destroyed 75 percent of all plants and animals on the planet, according to London’s Natural History Museum. 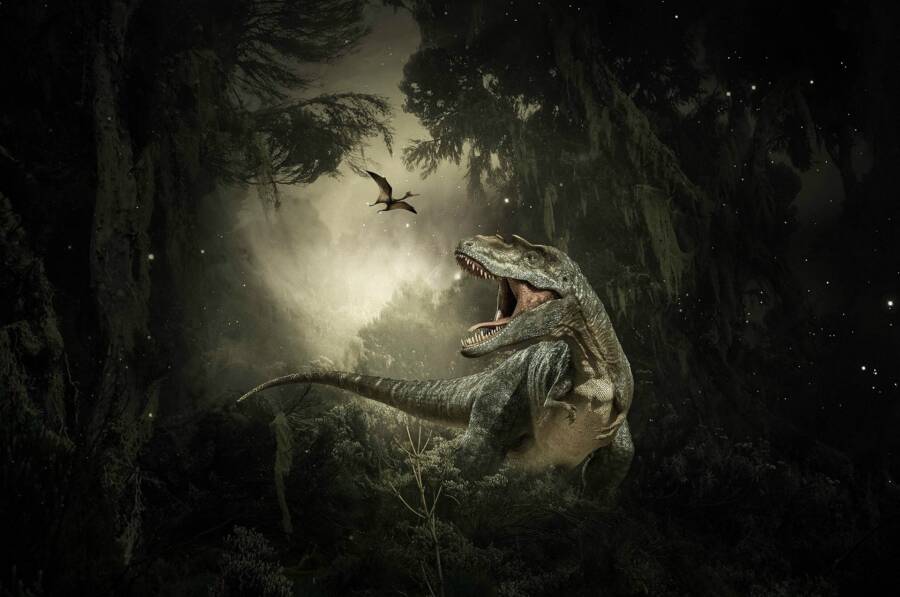 Willgard/Pixabay After walking the Earth for 165 million years, dinosaurs were wiped out in a mass extinction event 66 million years ago.

Ever since the first dinosaur fossil was identified in the early 19th century, scientists have put forth theories as to what could have killed some of the largest creatures to ever walk the Earth. They discussed everything from starvation to evolutionary disadvantages, but none of their hypotheses ever fully answered the question. Then, a giant crater was discovered in Mexico.

Today, most scientists agree that an asteroid strike sparked the mass extinction event that wiped out the dinosaurs. However, it’s likely that more than one factor attributed to the beasts’ demise. What is certain is that 66 million years ago, something big happened — and it was not favorable to life on Earth.

The Earliest Theories About What Killed The Dinosaurs

Before paleontologists uncovered much information about the Cretaceous period — the time in which the dinosaurs died — they put forth early theories about their extinction. According to HISTORY, one of these theories was that smaller mammals ate too many dinosaur eggs, reducing their population to the point of unsustainability.

Another theory was that the dinosaurs simply evolved out of their brains. That is, their bodies grew too large while their brains remained small. Other experts believed a deadly plague killed off the dinosaur population and then spread as other animals ate their carcasses.

And others thought that starvation was the reason for the dinosaurs’ demise. Bigger dinosaurs required a lot of vegetation to survive, after all. Perhaps they just ran out of food, scientists surmised.

However, most of these first theories could be disproven pretty quickly. If a dinosaur’s brain was incapable of adapting, the species probably wouldn’t have lasted for 165 million years. And many types of plants suffered a simultaneous extinction, so widespread disease didn’t make sense.

Climate change was also on the list of suspects. Eruptions from a supervolcano in India at the time were spreading immense heat and trapping gases inside the atmosphere, causing the Earth to get warmer.

Eventually, scientists agreed that a sudden, mass extinction event must have occurred that affected all life on Earth — from tiny microorganisms to the largest dinosaur. But what had the power to do such a thing?

In 1977, geologist Walter Alvarez was collecting limestone samples near Gubbio, Italy, when he made an odd discovery. In an area that had once been below sea level, he spotted a layer of clay between the limestone of the Cretaceous period and that of the later Tertiary period. In the Cretaceous limestone beneath the clay, there was a wide variety of fossils of the small sea creatures called foraminifera. In the stone above the clay, there was just one type of fossil. 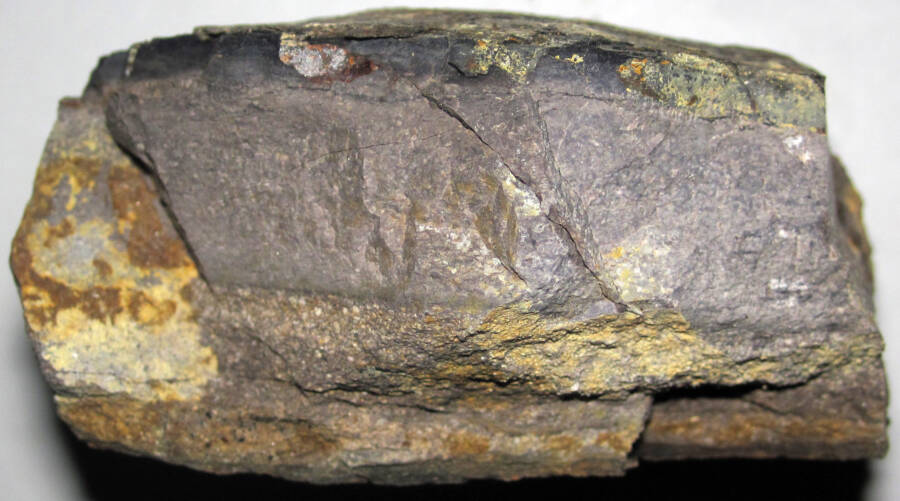 jsjgeology/FlickrThis Cretaceous-Tertiary (K-T) boundary clay excavated in Colorado has high levels of iridium, an element not commonly found in the Earth’s crust.

He took his findings to his father, Nobel laureate physicist Luis Walter Alvarez, and the two published a theory in 1980 that would shed an enormous amount of light on what exactly happened 66 million years ago.

The Alvarez duo discovered that the clay was rich in iridium, a silvery-white metal that is virtually non-existent in the Earth’s crust. However, high concentrations of iridium are often found in extraterrestrial objects. What’s more, scientists later found iridium in clay layers at dozens of other sites around the world with complete geological records of the Cretaceous-Tertiary boundary.

Luis and Walter Alvarez wrote that an asteroid hitting the Earth created the iridium-rich layer of clay — and killed the dinosaurs.

According to Berkeley Lab, this idea was controversial at first. If an asteroid that destructive had hit the Earth, where was the crater? At the time, most experts were courting the theory that volcanic eruptions at India’s Deccan Traps were what killed the dinosaurs.

However, in 1991, scientists identified the scene of the crime: the Chicxulub crater. Located on the coast of Mexico’s Yucatán Peninsula, the impact crater is 112 miles wide and 12.5 miles deep — large enough to hold two Mount Everests stacked atop one another.

Furthermore, researchers discovered shocked quartz, microtektites, and soot in the global iridium clay layer samples. These substances could only have been created in an enormous and violent impact, one that was full of heat.

The asteroid, the Alvarezes posited, tossed huge amounts of debris into the air, caused massive tidal waves, and sparked fires. It also landed in a sulfate-rich area, releasing deadly sulfur aerosols upon impact. This caused a global cocoon of toxic dust.

Some scientists insist the blame can’t be placed entirely on the asteroid. Before it crashed, Earth was experiencing climate change, causing substantial hardships for all life. 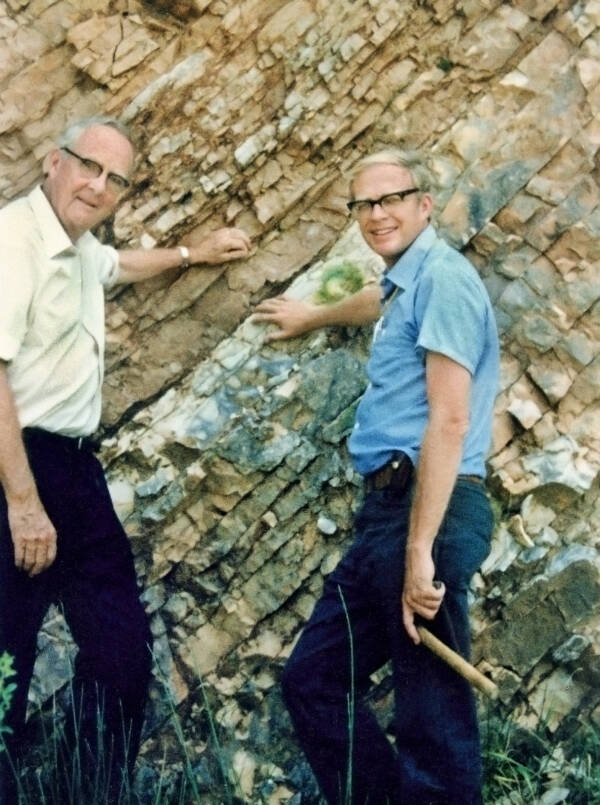 In the area that is now central India, there were intense volcanic eruptions causing their own problems. The result is a giant lava outcrop known as the Deccan Traps. It is one of the largest volcanic features on Earth, covering 200,000 square miles — as large as the states of Washington and Oregon combined.

Professor Paul Barrett, a paleontologist at the Natural History Museum in London, noted, “For two million years there was a huge amount of volcanic activity going on, spewing gases into the atmosphere and having a major impact on global climate.”

“There were also longer-term changes,” he continued. “The continents were drifting around and splitting apart from each other, creating bigger oceans, which changed ocean and atmosphere patterns around the world. This also had a strong effect on climate and vegetation.”

This information begs the question: were the dinosaurs already in trouble, and the asteroid was just the final blow? According to the museum, some scientists say yes, but others say new research indicates they were doing fine — even flourishing — before the asteroid sealed their fate.

Inside The Argument For The “Lone Cause” Of Dinosaur Extinction

With such changes occurring in the prehistoric world, it seems possible that what killed the dinosaurs was actually a few things in tandem. However, some Yale researchers are adamant that the blame lies solely on the asteroid.

According to CNN, their research indicates that any environmental impact from the eruptions in the Deccan Traps happened long before the mass extinction event. 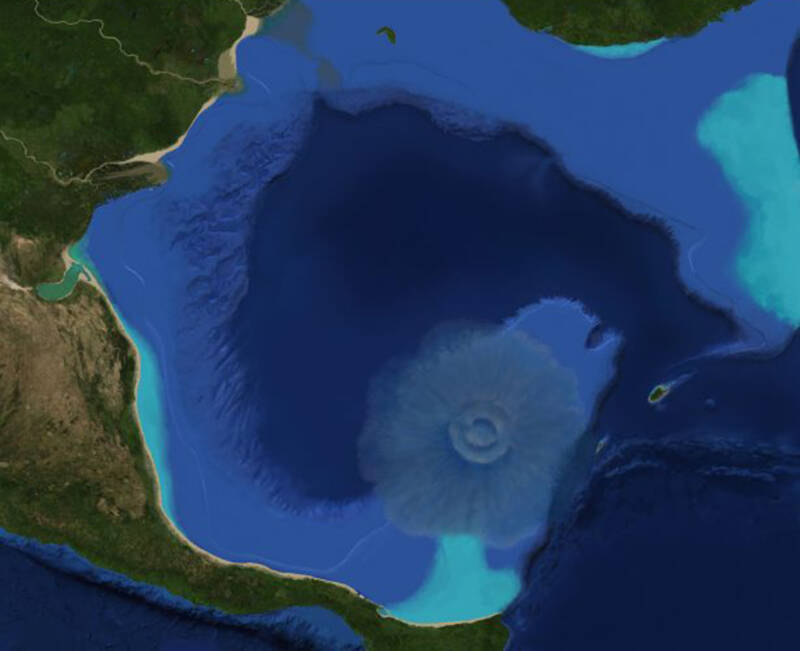 The volcanoes did “cause a warming event,” according to researcher Michael Henehan, but its effect had waned by the time the asteroid struck. All in all, gradual global warming of about two degrees likely did not have the power to cause a mass extinction.

An assistant professor of geology and geophysics at Yale, Pincelli Hull, agrees. “If someone came up with compelling evidence tomorrow, I’d be prepared to say we are wrong. But it really doesn’t look like it based on what we know today,” she told CNN.

Any way you look at it, the loss of dinosaurs cleared room for the animals of the modern world. But things could be much different today if that asteroid had hit just a few moments earlier or later — into the ocean instead of the gulf.

After learning about what killed the dinosaurs, read more about where the asteroid that caused the mass extinction event originated in space. Then, go inside the dinosaur nest with intact embryos discovered in Argentina.