Why Is The World Filled With Depictions Of A White Jesus When The History Says Otherwise?

Was Jesus white, Black, or another race entirely? Go inside the complicated history of what color Jesus of Nazareth may have been. 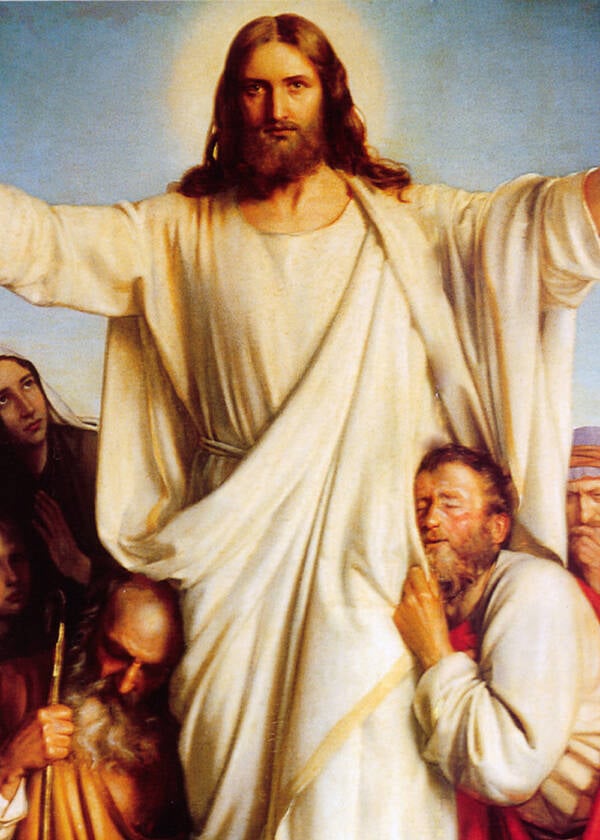 Jesus Christ has been an object of veneration and worship for nearly 2,000 years. As the central figure in Christianity, images of him fill churches, homes, and museums around the world. But why is Jesus white in most of these depictions?

As Jesus’ following spread out of the Middle East — sometimes via devoted missionary work and sometimes by more aggressive methods — people across western Europe started casting Jesus in their image.

Doing that was relatively easy since the Bible contains only a few (contradictory) words on what Jesus’s race was and what he looked like. However, scholars have a better idea of what people, in general, looked like in the Middle East around the first century — and they weren’t light-skinned.

Yet, a white Jesus remains the standard in most modern depictions. Why?

Though the Bible tells the story of Jesus Christ — whose real name was actually Yeshua — it says little about his appearance. In the Old Testament, the prophet Isaiah describes Jesus as having “no beauty or majesty.” But the Book of Psalms directly contradicts this, calling Jesus “fairer [more beautiful] than the children of men.”

Other descriptions of Jesus Christ in the Bible offer few other clues. In the Book of Revelation, Jesus is described as having hair like “white wool,” eyes like “flames of fire,” and feet “like burnished bronze, refined as in a furnace.”

This “graffito” from first-century Rome shows someone named Alexandros worshipping a man with a donkey head who is being crucified. The inscription reads “Alexandro worshiping his god.” 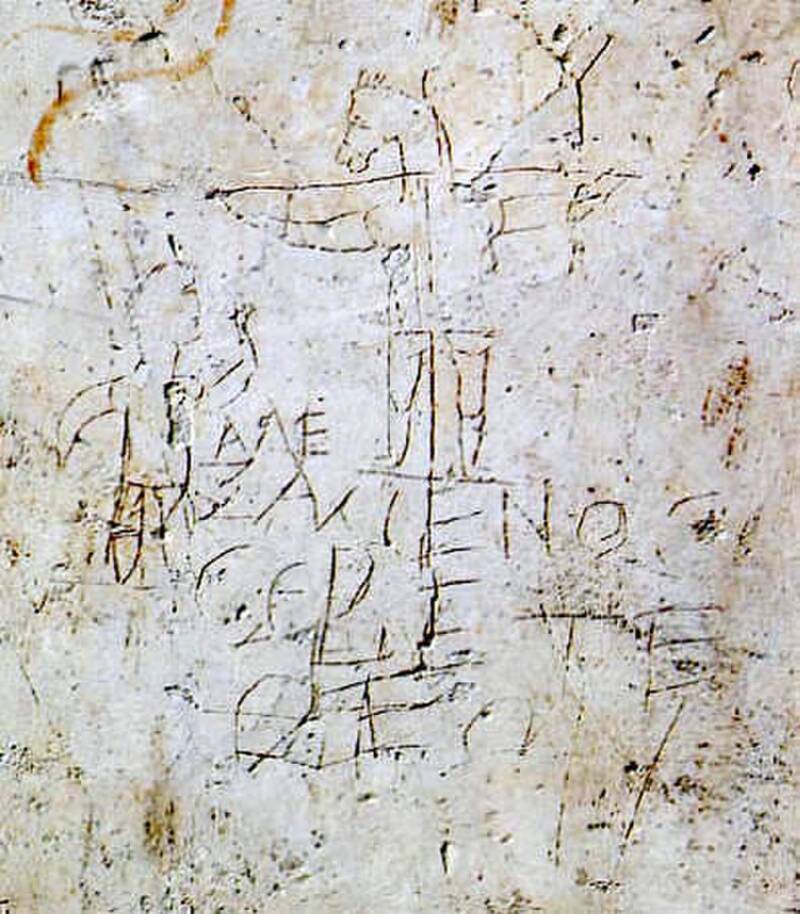 Public DomainOne of the earliest known depictions of Jesus Christ is actually a mockery.

The Callisto catacomb in Rome, for example, contains a famous third-century image of Jesus Christ — the “Good Shepherd” — with a lamb over his shoulder. Significantly, he is depicted here without a beard. Though this was a common look among Romans of the age, most Judean men had beards. 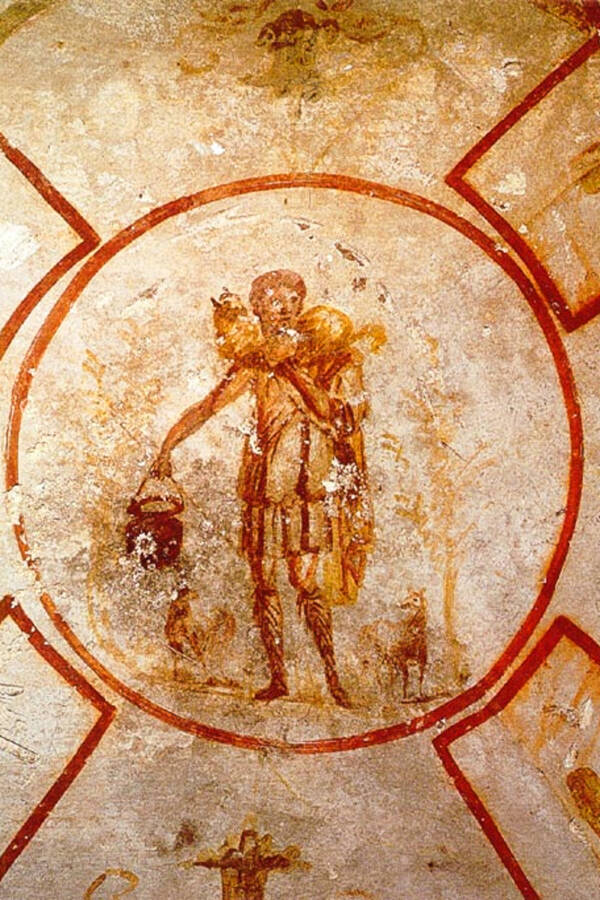 Public DomainJesus Christ as the “Good Shepherd” in the Callisto catacomb in Rome.

In this image, one of the oldest known attempts to depict him, Jesus appears Roman or Greek. And as Christianity began to spread, images like this began to appear throughout Europe.

Depictions Of Jesus’ Race Under The Romans

Though early Christians worshiped in secret — passing along clandestine images like ichthys to share their faith — Christianity began gaining prominence in the fourth century. Then, the Roman emperor Constantine converted to Christianity — and depictions of Jesus Christ began to proliferate. 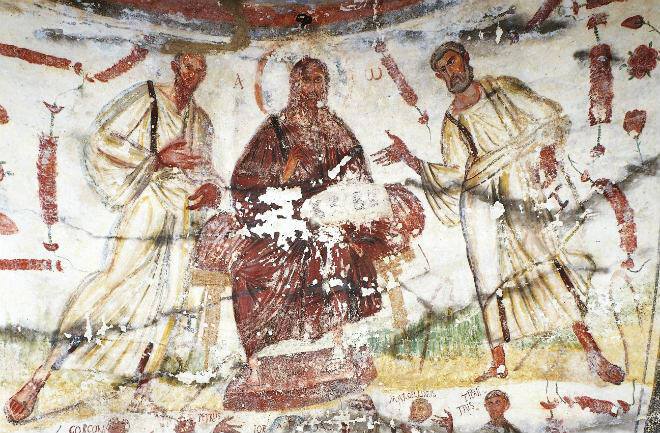 In the fourth-century fresco above, many elements of traditional Christian iconography make an appearance. Jesus has a halo, he’s in the top-center of the composition, his fingers are held in a benediction, and he’s clearly European. He — and Peter and Paul — wear European-style clothing.

Significantly, Jesus also has the wavy, flowing hair and beard seen in many modern-day depictions.

This depiction grew so popular that it ricocheted back into the Middle East, where Christianity has its roots. That’s because white Christians were moving aggressively across the globe — colonizing and converting as they went — and they brought images of a white Jesus with them. 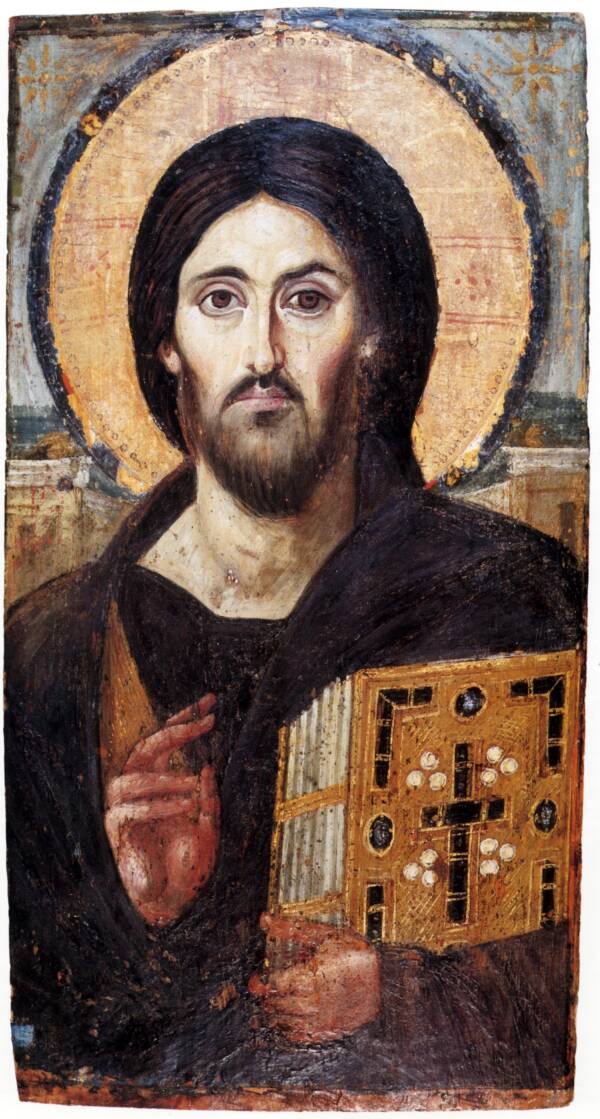 Wikimedia CommonsJesus Christ as depicted in the sixth century at Saint Catherine’s monastery in Egypt.

For colonizers, white Jesus had a dual purpose. Not only did he represent Christianity — which colonizers hoped to spread — but his fair skin put the colonizers themselves on the side of God. His race helped enforce caste systems in South America and the suppression of indigenous people in North America.

The Modern Look Of The White Jesus

As the centuries passed, depictions of white Jesus became enshrined in popular culture. Since early artists wanted their audiences to recognize Jesus — and feared accusations of heresy — similar images of Jesus Christ were reproduced across the centuries.

In 1940, the idea of a white Jesus got a special boost from American artist Warner E. Sallman, who painted Jesus Christ as white-skinned, blonde-haired, and blue-eyed.

Sallman’s original image, meant for a youth magazine called Covenant Companion, swiftly gained in popularity, appearing in churches, schools, courtrooms, and even on bookmarks and clocks. 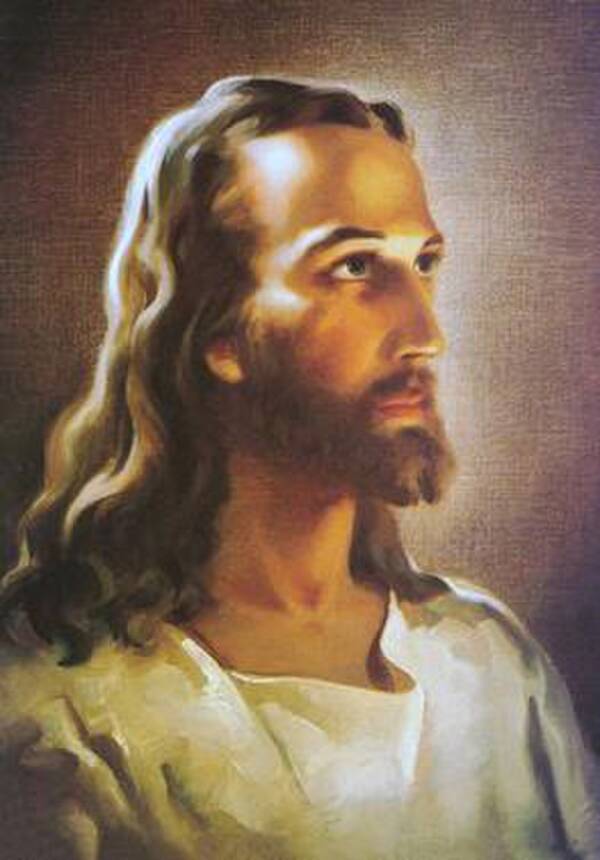 Though Sallman’s white Jesus faced backlash during the civil rights movement of the 1960s, contemporary depictions of Jesus continue to show him as fair-skinned. Frescoes may have fallen out of style but modern-day portrayals of Jesus certainly appear in films and TV shows.

Film depictions often take more liberties, but most of the actors chosen to play Jesus Christ are white. Jeffrey Hunter (King of Kings), Ted Neeley (Jesus Christ Superstar), and Jim Caviezel (The Passion of the Christ) were all white actors. 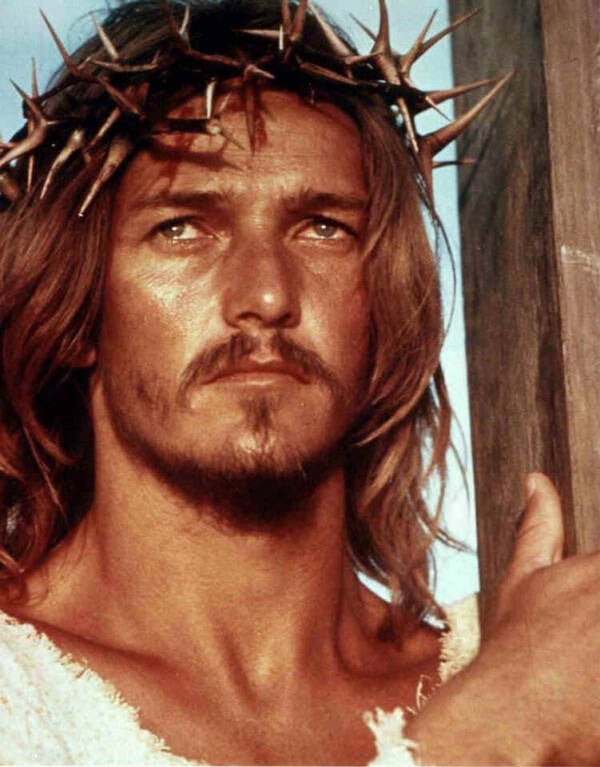 The whiteness of Jesus Christ has faced pushback in recent years. Activists equating white Jesus with white supremacy have called for a change, with one noting that “the Jesus you saw in all the black Baptist churches [looks] like the people who were beating you up in the streets or setting dogs on you.”

Their depictions — of Jesus Christ as a person of color — are somewhat closer to the truth. People of his time and place likely had dark hair, dark skin, and dark eyes.

Though it’s all but certain that images of white Jesus will continue to appear, many people are open to new depictions of Christ. After all, the story of Jesus Christ — and the rise of Christianity — is a complicated one. Certainly, it’s one with room for plenty of interpretation.

After this look at the myth of a white Jesus, read up on the tomb of Jesus as well as the true story of who wrote the Bible.