How Did Whitney Houston Die? Inside The Iconic Singer’s Tragic Final Days

One of America's most successful singers, Whitney Houston died from a drug-related drowning in her hotel bathtub in Beverly Hills on February 11, 2012.

Whitney Houston died at the Beverly Hilton on Feb. 11, 2012, the day before the 54th Annual Grammy Awards. Ever since record producer Clive Davis had signed her to his label 30 years before, it had become a tradition for him to host a party at the hotel the night before the awards. But this year, Houston wouldn’t make it.

Earlier that day, Houston’s longtime assistant, Mary Jones, left the singer’s suite for mere moments to find a dress for her, only to return and see her facedown and unresponsive in the bathtub.

The Beverly Hills Fire Department arrived at 3:30 p.m. and performed CPR for 20 minutes before pronouncing Whitney Houston dead at 4 p.m. 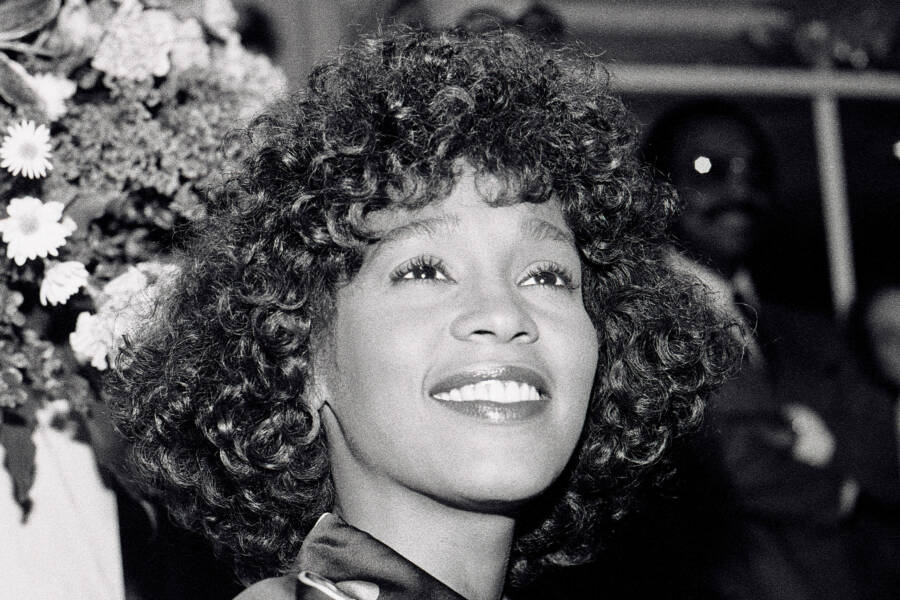 Steve Rapport/Getty ImagesWhitney Houston died of “drowning and effects of atherosclerotic heart disease and cocaine use.”

Drug paraphernalia littered the bathroom, but Houston’s prescription medications had been moved, and her driver’s license was missing. The coroner’s report concluded she had been “acutely intoxicated from cocaine” and that this “contributed” to her accidental death. But Jones believed foul play was involved.

And to this day, there remain numerous unanswered questions about how Whitney Houston died at the Beverly Hilton when she was just 48 years old.

Whitney Elizabeth Houston was born on August 9, 1963, in Newark, New Jersey. While her father, John, was an Army veteran who worked for the city, her mother, Emily Drinkard, was a gospel singer and Dionne Warwick’s cousin. Drinkard had sung backup vocals for Aretha Franklin, whom Houston gleefully met as a child.

Houston appeared to have God-given talent at an early age and began singing in church with the dedication of a professional. Her voice had grown so powerful in her teenage years that both Chaka Khan and Lou Rawls hired her as a backup singer. Soon, record producers came calling. 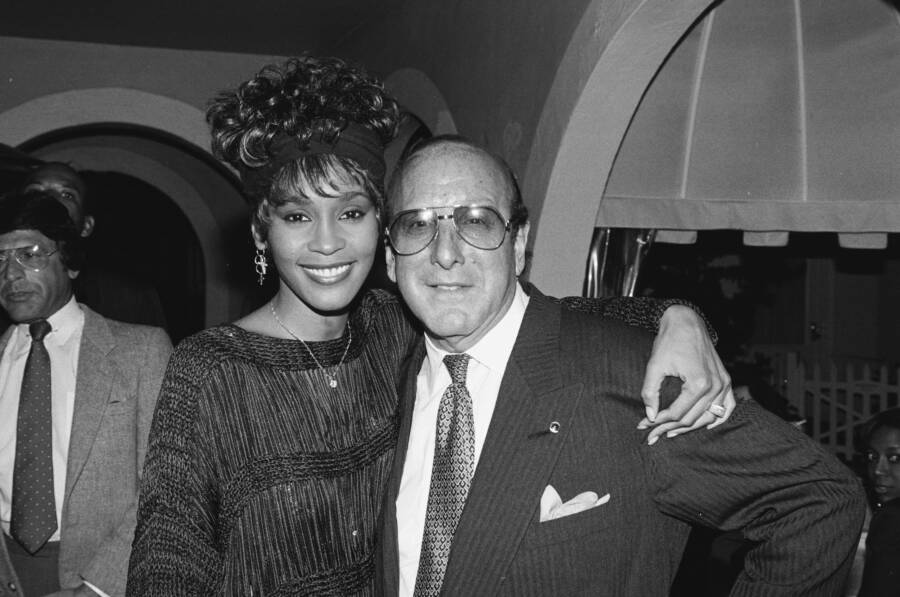 When he offered Houston a record deal with Arista Records in 1982, Clive Davis had already turned talents like Bruce Springsteen and Billy Joel into superstars. And at just 21 years old, Houston released her self-titled debut album in 1985 and took off with iconic hits like “The Greatest Love of All” and “How Will I Know.”

With unparalleled passion and the voice of an angel, her sophomore effort Whitney garnered her a Grammy Award for “I Wanna Dance with Somebody.” She grew into a musical icon in the span of a decade.

But it was also a time of rampant recreational cocaine use in the industry, and as her star power grew, so did her deadly addictions. After she married singer Bobby Brown in 1992, her drug use soared.

What Investigators Found In The Hotel Room

When Whitney Houston checked into her Beverly Hilton suite in February 2012, she was prepared to attend both the annual pre-Grammy party hosted by Clive Davis on February 11 and the awards the following day. Her family later revealed that she had once again been using cocaine. 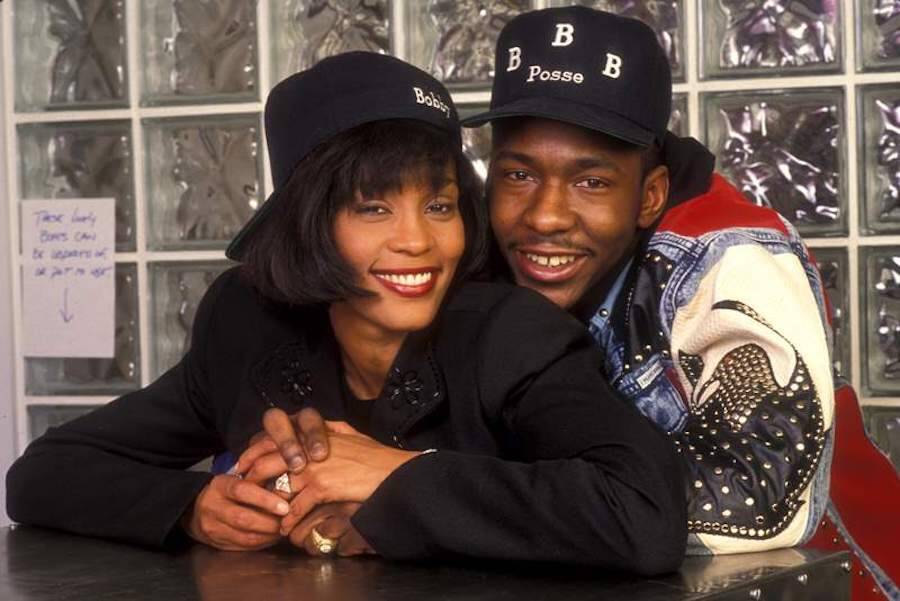 One day before attending the pre-party, Houston had a premonition. She found her 18-year-old daughter, Bobbi Kristina Brown, asleep in her bathtub and saved her from drowning. As Houston’s goddaughter Brandi Boyd revealed, mere moments could have cost the 18-year-old her life.

“Whitney said that God told her to go and check on Krissi,” said Boyd. “Her mother literally was her savior. If my godmother had not walked in that bathroom the very second she did, Krissi would have died.”

In a macabre turn of events, Whitney Houston died the next day and was found with a “bloody purge coming from her nose.” The 42-page coroner’s report would be published on March 22, 2012, and revealed Whitney Houston’s cause of death to be “drowning and effects of atherosclerotic heart disease and cocaine use.”

The coroner’s office also explained that she was found in a water-filled bathtub with the faucets turned off. Drug paraphernalia was scattered about the bathroom, including a “small spoon with a white crystal like substance in it and a rolled-up piece of white paper.”

The report on the death of Whitney Houston also stated that 12 bottles of prescription medication were present. These included Xanax, Benadryl, and the muscle relaxant Flexeril, which had been doled out by five different doctors. Houston had traces of marijuana and cocaine in her system, while her bedroom held an open bottle of champagne, two beers, and loose tablets.

Found dead with a wig on her head, Whitney Houston’s body held scars from breast augmentation surgery and showed signs of the defibrillators used in attempts to revive her at the scene.

How Did Whitney Houston Die?

Whitney Houston’s assistant, Mary Jones, discovered her body. She had been with Houston all day and left her hotel suite for only a few minutes to pick up a dress for the pre-Grammys party before returning to discover Houston in the bathtub with her wig still on her head. None of it made sense to her. 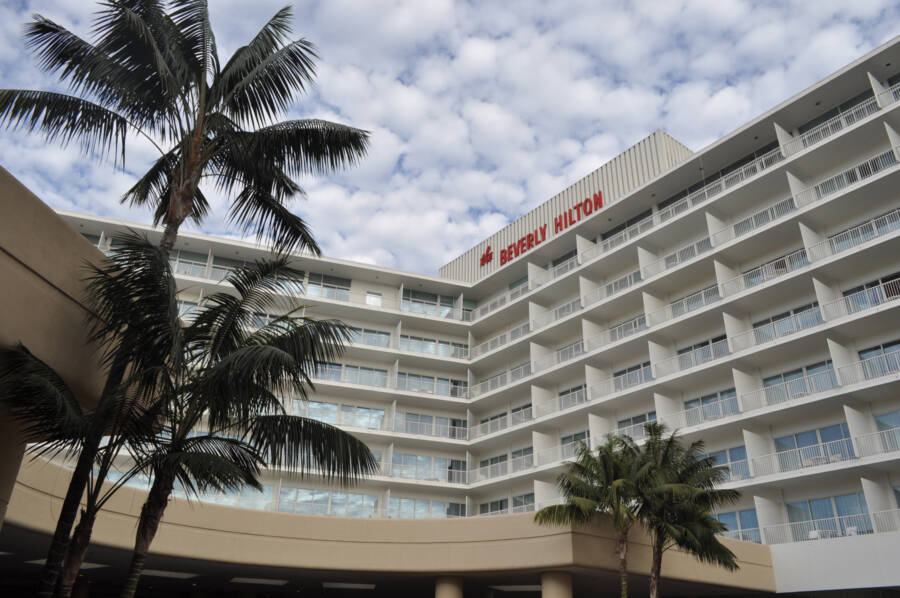 “Somebody was in the room with her, had given her these drugs, and had found her drowned in the bath, switched off the taps and left the room,” said Jones.

In his report on Whitney Houston’s death, forensic pathologist Cyril Wecht noted the bathtub water had reached 93.5 degrees — hot enough to leave burn marks on her skin — and stated that he didn’t believe she drowned.

“I think that she fell into this very hot water, that accounts for a little bruise that was seen in the left forehead area, some other pressure markings on the face, including the slight laceration of the lip, and the fact that she is lying face down,” said Wecht.

“I think that this lady fell into the water, she was unconscious, dead or dying when she fell into the tub. I do not believe that the death was due to drowning, although I cannot rule out that she could’ve been in the agonal moments and with her head submerged in water that certainly could have contributed to her death.”

The coroner reported that, while Houston’s purse contained her wallet, the singer’s “California driver’s license had been removed from the wallet, which was inside the purse, prior to my arrival.”

“Also prior to my arrival, the majority of the decedent’s prescription medication bottles had been removed from a brown bag that was on top of the table in the southeast corner of the living room, and then placed on top of that same table.” 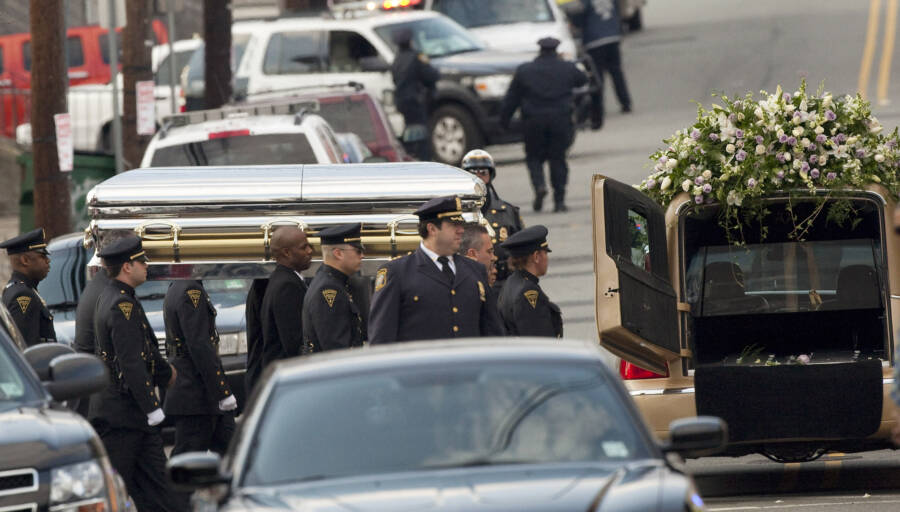 Whitney Houston’s death was ruled an accident, and she was buried on Feb. 19, 2012, at the Fairview Cemetery in Westfield, New Jersey, next to her father.

Her sister-in-law Pat Houston later told Oprah Winfrey that the singer had been “chasing a dream… looking for comfort, love” and that she had been chasing someone “that would ultimately hurt her.”

And despite surviving her near-drowning in 2012, Bobbi Kristina Brown would die under tragically similar circumstances as her mother just three years later.

Found unconscious in her bathtub in January 2015, Bobbi Kristina Brown was hospitalized in a coma for six months before dying of pneumonia. She was buried next to her mother.

After learning about Whitney Houston’s death, read about the questions that still surround Marilyn Monroe’s death. Then, learn about 9 notorious stage mothers and celebrity parents.