"DxE members have repeatedly entered our stores and property to conduct demonstrations that disrupt customers and team members by blocking access to our aisles, departments and cash registers." 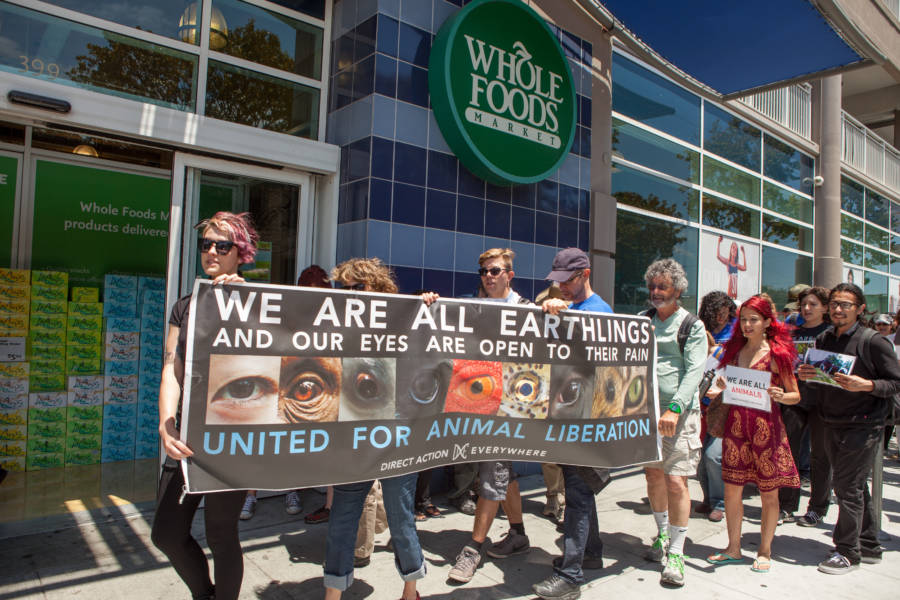 A Whole Foods supermarket in Berkeley, Calif. was forced to file a restraining order against a vegan group which was determined to “expose” the chain’s animal welfare violations.

The order was filed against the group known as Direct Action Everywhere, or DxE, after they threatened to “Occupy Whole Foods” during a weeklong protest in late Sept. 2018.

The group called for “total animal liberation” on behalf of the health-food chain and claims to have witnessed animal abuse on behalf of multiple Whole Foods farm suppliers.

DxE had hoisted a big black banner with the phrase “OCCUPY WHOLE FOODS” in big black lettering, implying that they planned to enter the store itself and demonstrate on Whole Foods property.

But before that plan could materialize, the restraining order was granted to the store and DxE protesters were prevented from entering the premises.

“We are not allowed to even step foot in the parking lot right now,” said Cassie King, a DxE organizer. “We can’t go inside the store and ask our questions.”

The group claims that their protests are peaceful and non-evasive. However, a Whole Foods spokesperson reported that the protesters had been disrupting the store’s daily operations and had even put their staff at risk prior to this failed occupation.

DxE says that they are seeking “greater transparency in both Whole Foods and Amazon’s supply chain. They also accuse Whole Foods of running a “conspiracy” to cover up their animal welfare practices, though there is little evidence that supports this allegation.

According to the director of the farm animal program for the Animal Welfare Institute, Dena Jones, Whole Foods administers a more rigorous evaluation when it comes to the animal products they supply and sell.

“All suppliers of fresh meat, poultry, and eggs to Whole Foods must be certified by Global Animal Partnership (GAP), which is a farm animal welfare rating program,” Jones stated via email. “On-farm inspections are conducted every 15 months to determine whether the farm is in compliance with GAP standards. Unlike the organic program, GAP standards are comprehensive and cover nearly all aspects of animal care.”

But protesters from DxE insist that this is not the case. They claim that Whole Foods uses poultry suppliers who confine their chickens in overcrowded spaces and are not given access to the outdoors — even though Whole Foods labels their chickens as “free-range.”

A graphic video published by DxE in which the group accuses a Whole Foods supplier of mistreating their chickens.

DxE has become known in the Bay Area specifically for their extreme forms of protest. Aside from disrupting store operations, members have been known to splatter eggs with fake blood, act out scenes of animal slaughter, and display graphic images of animals in poultry and other meat aisles in stores.

According to SF Gate, earlier in 2018 one DxE activist smeared herself in animal feces in front of a Berkeley Trader Joe’s market in order to illustrate the treatment of chickens at one of the chain’s egg suppliers in Michigan. The protester claimed that those chickens were forced to live in their own feces.

DxE provided video footage that they claimed came from that supplier, but Trader Joe’s denied any such accusation.

“We have spoken with Dutch Farms, who supplies three offerings of eggs to our stores in the Midwest, and have been assured that the footage shown in the video is not from a farm that supplies eggs to Trader Joe’s,” Trader Joe’s spokeswoman Kenya Friend-Daniel said in a statement.

“If we were to discover that any Trader Joe’s supplier is not meeting our expectations, we would take immediate action, up to and including terminating our relationship,” she added.

Despite this recently awarded restraining order, DxE has continued their efforts. Members are still in protest against the Whole Foods store in Berkeley from the nearest distance that they are legally allowed.

Next, read this story about a Pennsylvania dog breeder who was accused of “debarking” his dogs. Then, learn about a court ruling in India that claimed all animals have the same rights as humans.