Why Was The Eiffel Tower Built? Inside Its Controversial Construction

When the Eiffel Tower was built by Gustave Eiffel in 1889, it was designed to be the main attraction of the World's Fair — but most Parisians hated it.

Today, the Eiffel Tower is a symbol of romance and beauty in the heart of the City of Lights, but countless critiques were leveled against the structure when it was first erected in the late 19th century. Scores of people across Paris couldn’t comprehend why the Eiffel Tower was built at all.

Constructed for the 1889 World’s Fair, the Eiffel Tower was originally built to commemorate the 100th anniversary of the French Revolution. But if a vocal group of Parisians had their way, the beloved monument would’ve been torn down immediately after the festivities were over.

“A diabolic undertaking of a boilermaker with delusions of grandeur!” exclaimed French author Guy de Maupassant when the Eiffel Tower was built.

Others called it a “truly tragic street lamp,” a “mast of iron gymnasium apparatus, incomplete, confused and deformed,” a “hideous column with railings, this infundibuliform chicken wire, glory to the wire and the slab, arrow of Notre-Dame of bric-a-brac.”

Even before engineer Gustave Eiffel, the man who built the Eiffel Tower, kicked off construction in 1887, the project was marred by mass protests led by Parisian critics who dubbed the new landmark a “useless and monstrous” eyesore that would taint Paris forever. However, history certainly had a way of eventually proving such critics wrong. 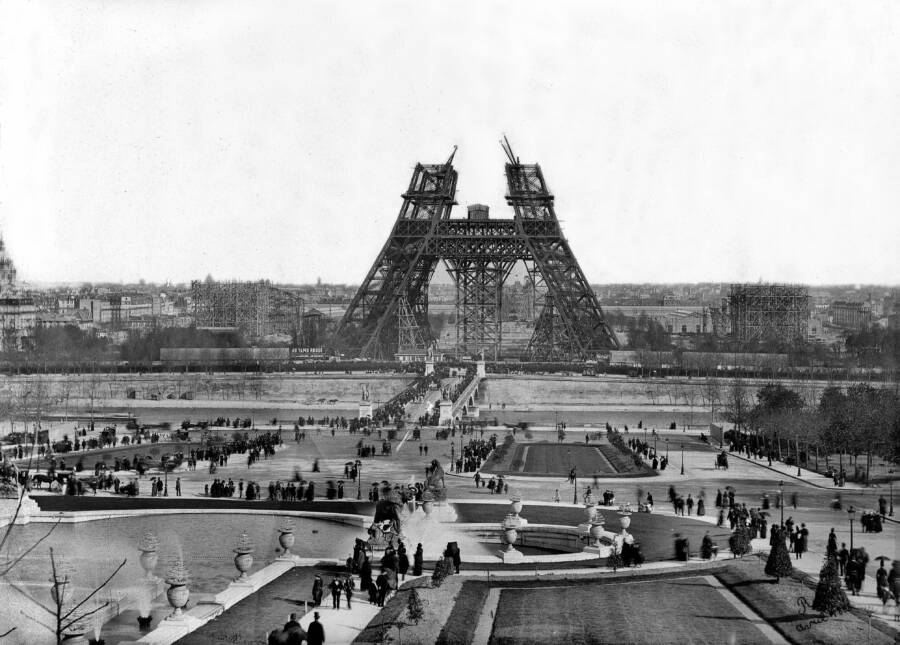 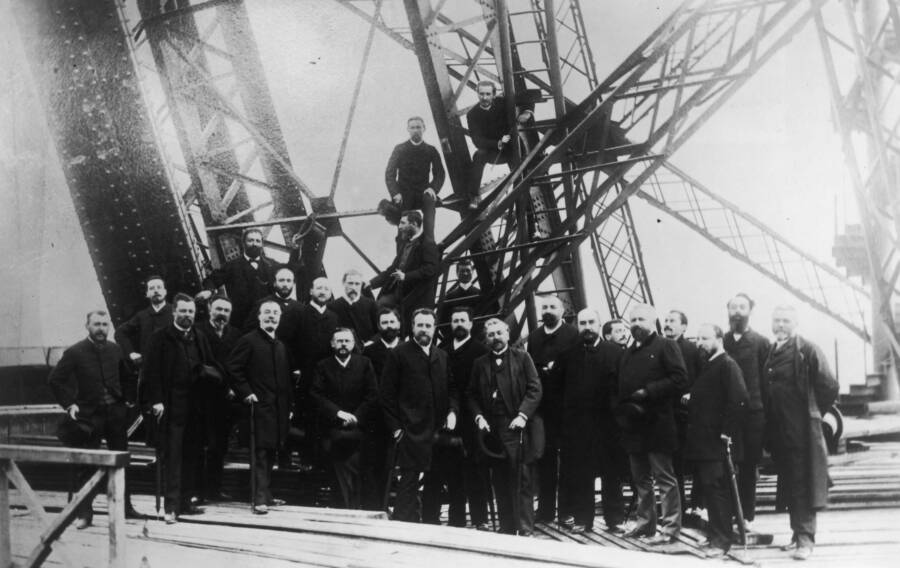 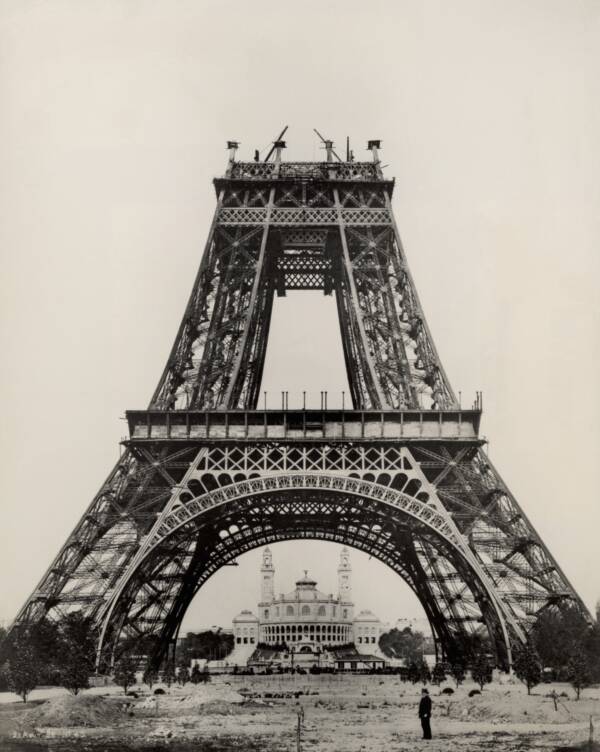 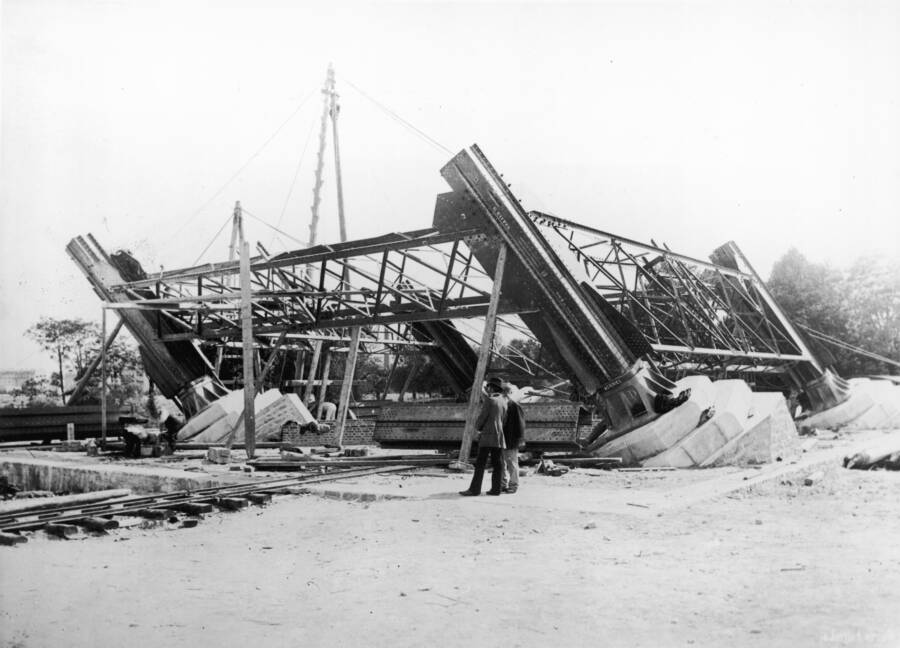 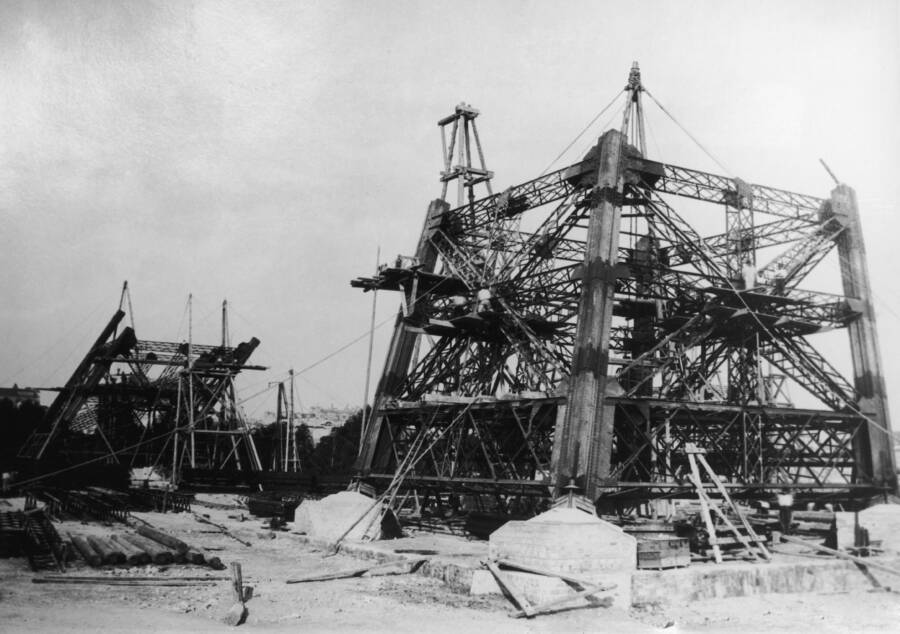 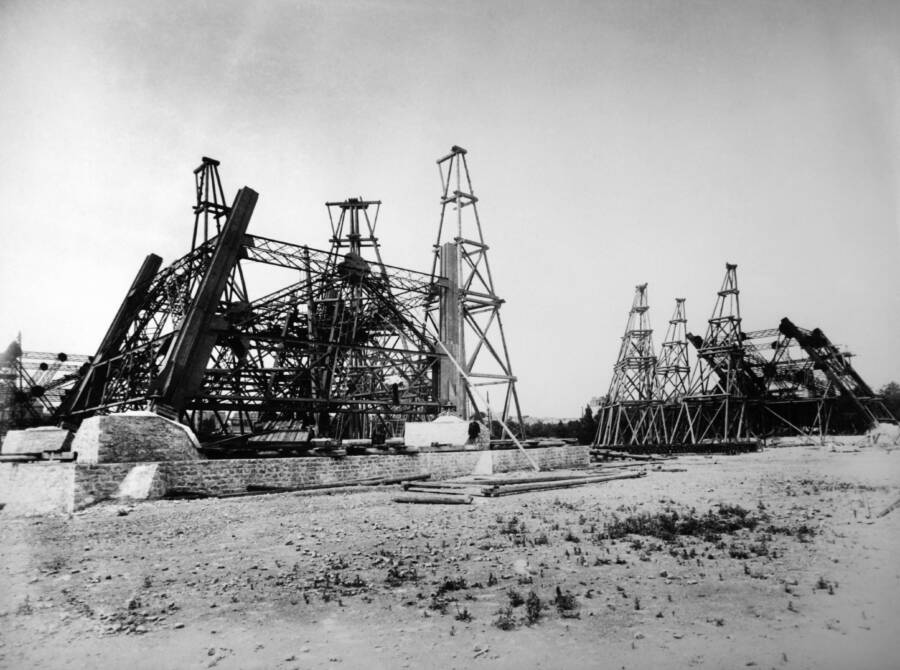 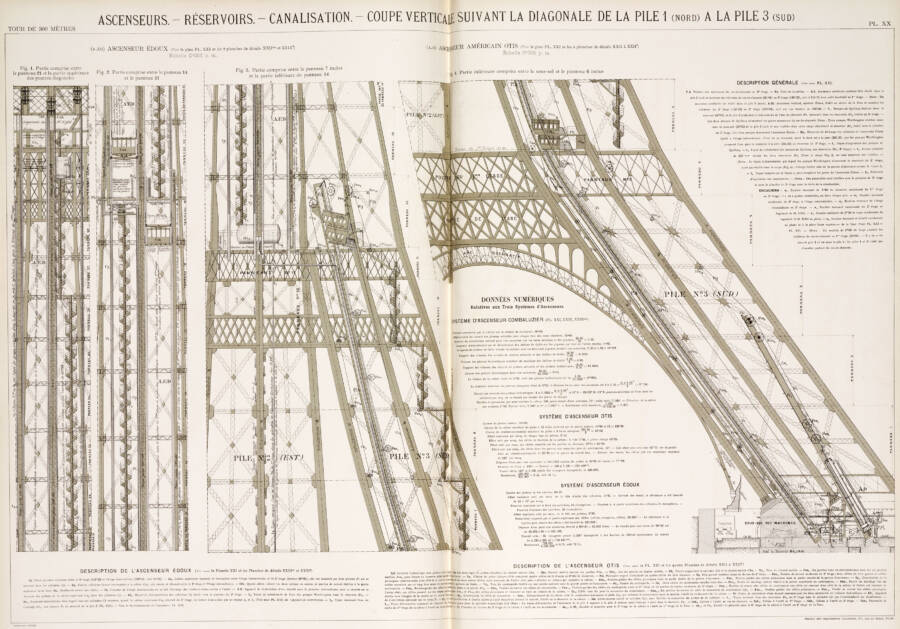 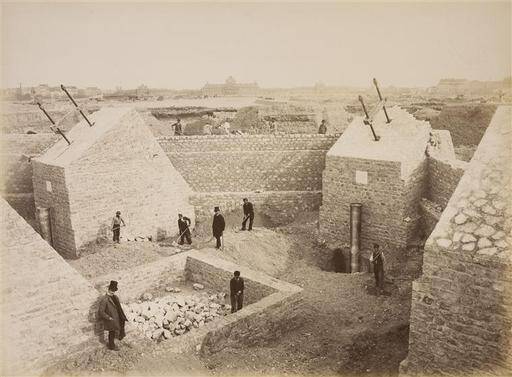 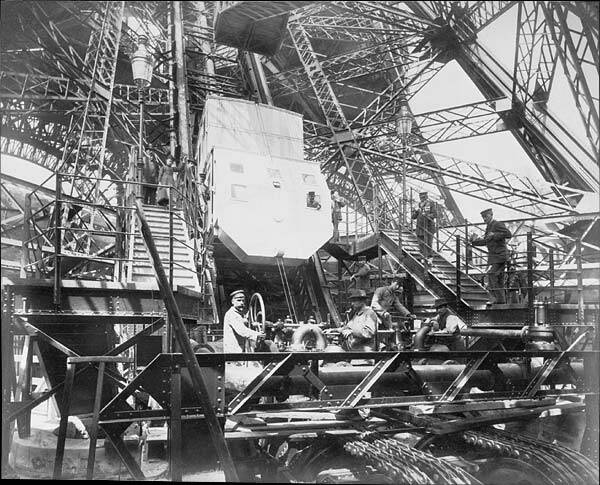 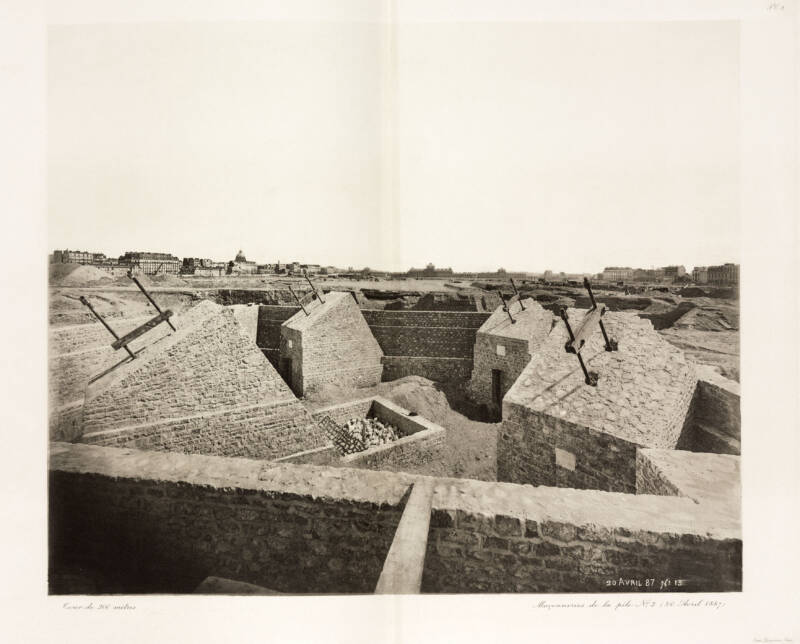 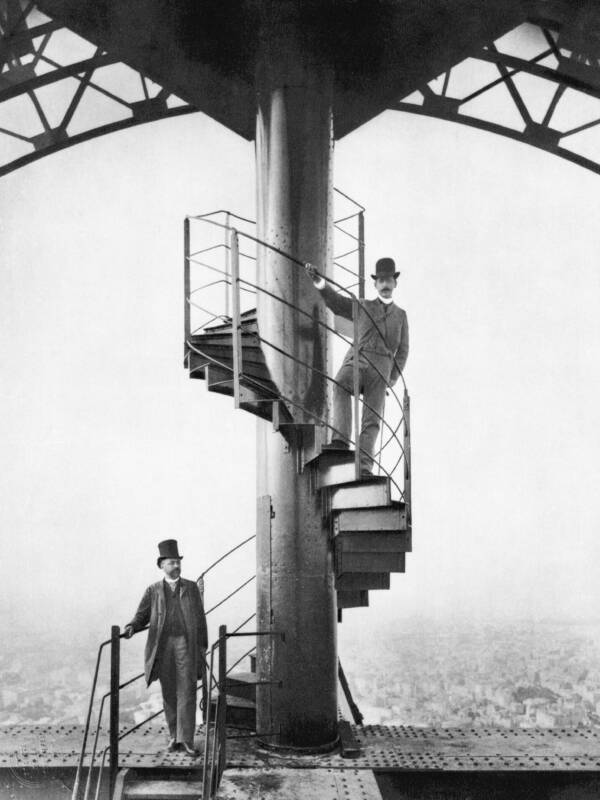 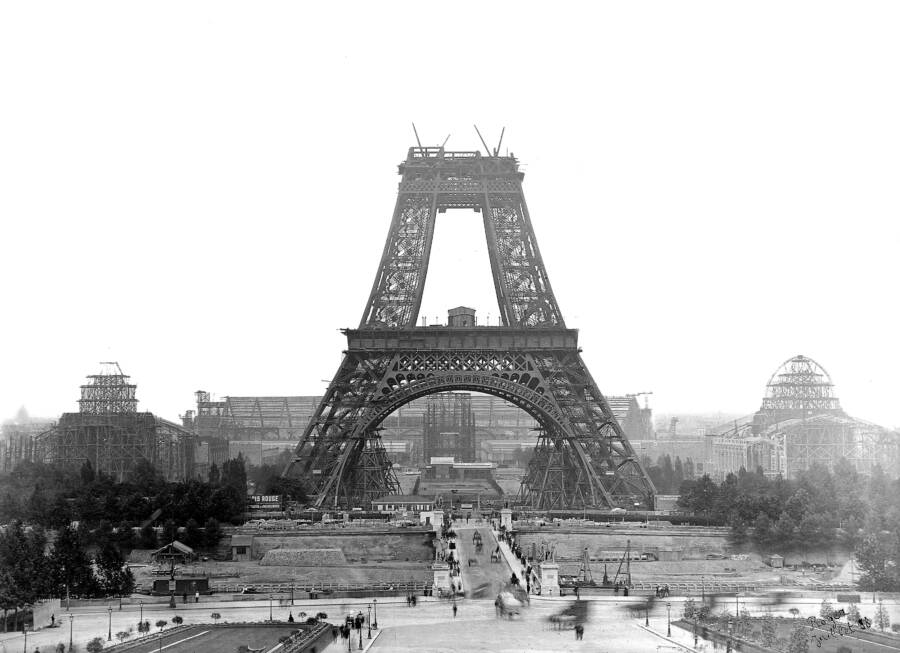 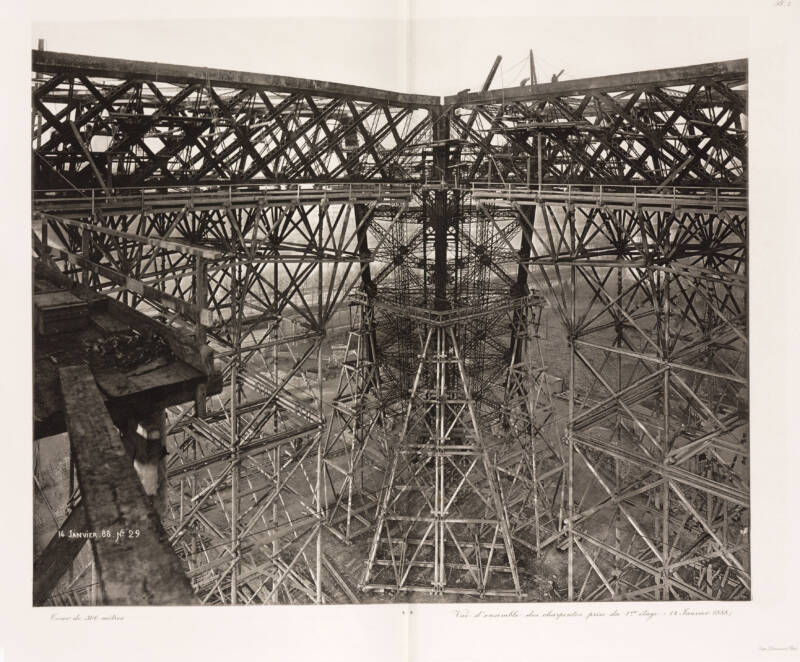 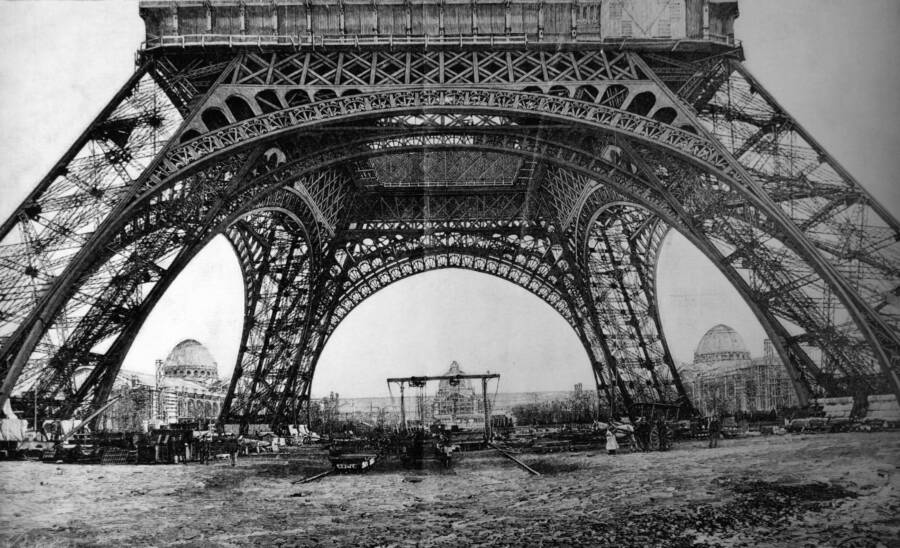 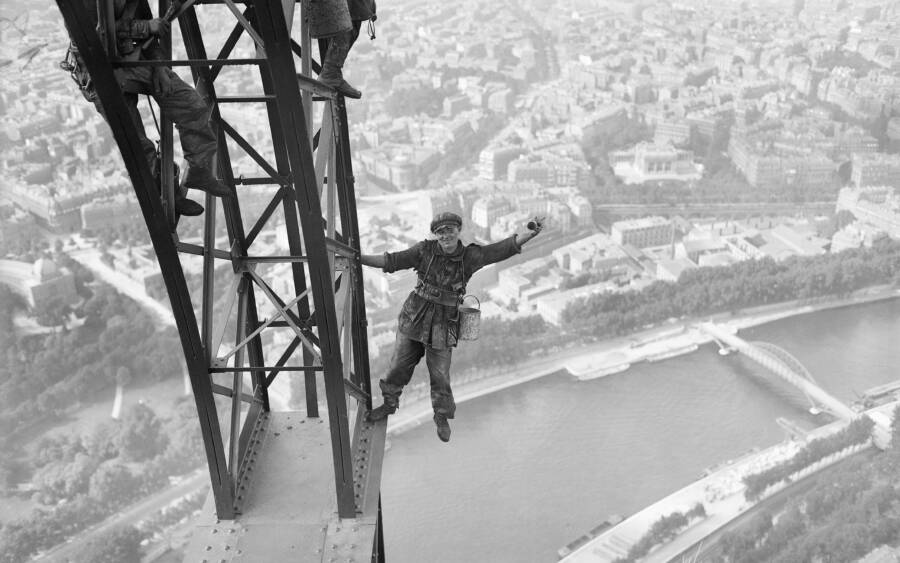 The architects inspected the structure in the company of Gustave Eiffel (center, right). FPG/Archive Photos/Getty Images
3 of 16
French engineer Gustave Eiffel stands at the base of the Eiffel Tower during its construction in 1888. Why Was The Eiffel Tower Built? Inside Its Controversial Construction
View Gallery

Why Was The Eiffel Tower Built?

Alexandre Gustave Eiffel was born on Dec. 15, 1832, and grew up in Dijon, the capital of Burgundy. Weaving was a common profession among his family members, but it was two chemist uncles who would have an outsized influence on him. They encouraged his interest in a variety of subjects. 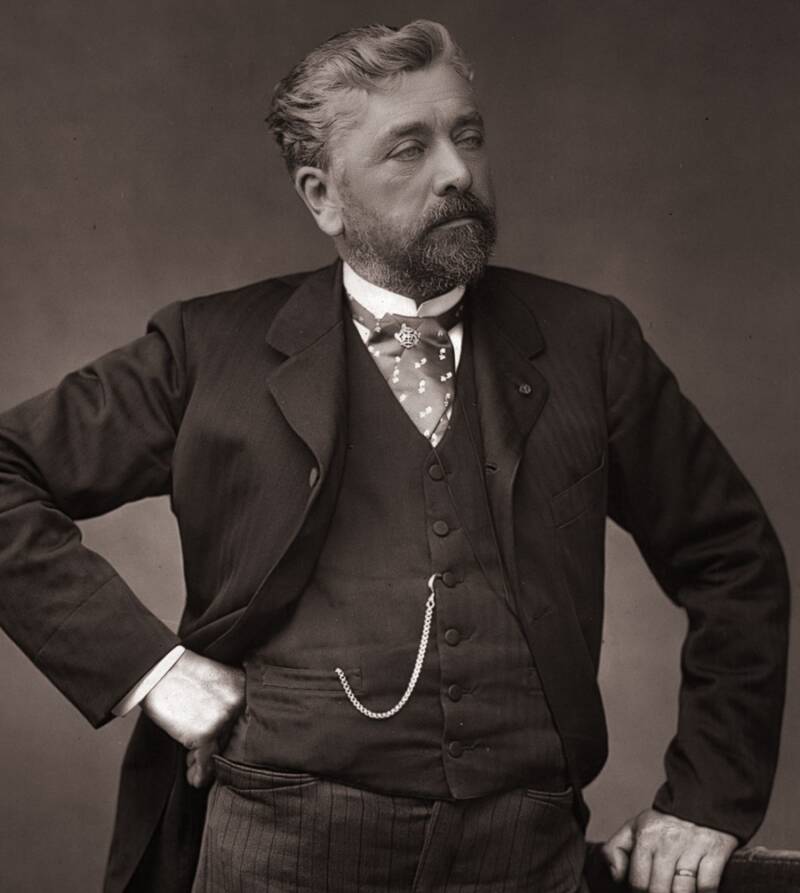 Eiffel eventually turned his attention to metal work and moved to Paris, where he sought to make a name for himself. He landed a job under a railway construction engineer named Charles Nepveu, who later entrusted Eiffel with the execution of the Bordeaux Bridge. His work on the bridge was completed in 1860 and it led to many similar projects.

In 1886, the French government held a design competition to build a flagship structure for the upcoming World's Fair in Paris, which also coincided with the centennial commemoration of the French Revolution. This landmark design needed to be completed within three years.

Confident in his skills as an architect, Eiffel decided to submit a design for the competition. His design for a steel lattice tower beat the 700 other submissions received by the Centennial Exposition Committee.

Gustave Eiffel's design was tremendously ambitious. Standing at nearly 1,000 feet tall, the Eiffel Tower would outsize the Washington Monument, which at 555 feet was the tallest landmark in the world at the time. 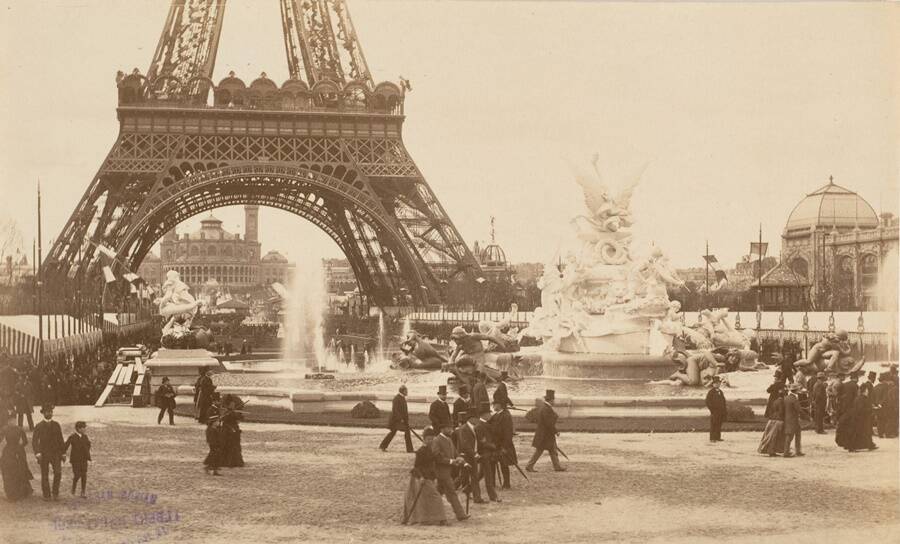 Sepia Times/Universal Images Group via Getty ImagesThe construction of the Eiffel Tower was initially met with protests from the city's artists.

Not only extremely tall for its time, the Eiffel Tower was also very intricate. It would be made of 18,000 wrought iron pieces held together with 2.5 million rivets, with four curved iron piers connected by a lattice of girders. After careful calculations, the tower's curves were designed to offer the maximum amount of efficient wind resistance.

Describing the design, Eiffel said, "Before coming together at the high pinnacle, the uprights appear to burst out of the ground, and in a way to be shaped by the action of the wind."

When The Eiffel Tower Was Built, Parisians Immediately Began To Protest 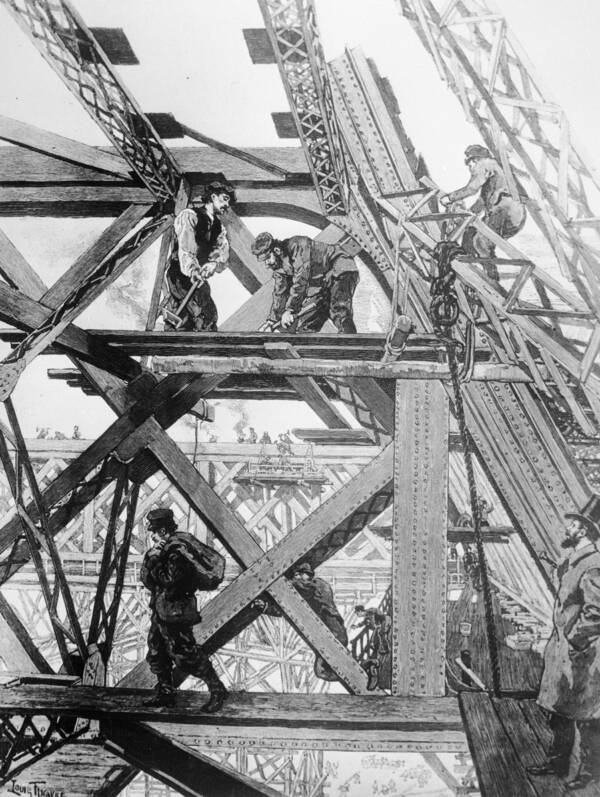 Three Lions/Getty ImagesWorkers inside the tower's steel skeleton during the construction.

For Eiffel, the tower was a symbol of the modern century. He hoped that the structure would also prove useful for the work of meteorologists and cartographers given its tremendous height.

But not everyone was impressed. News of the dark steel tower sparked criticism from the public, mainly among the creative city's legion of artists.

Led by Charles Garnier, the architect behind the famed Grand Palais Garnier, hundreds of artists — mostly painters, poets, and writers — signed a public petition in protest of the Eiffel Tower. 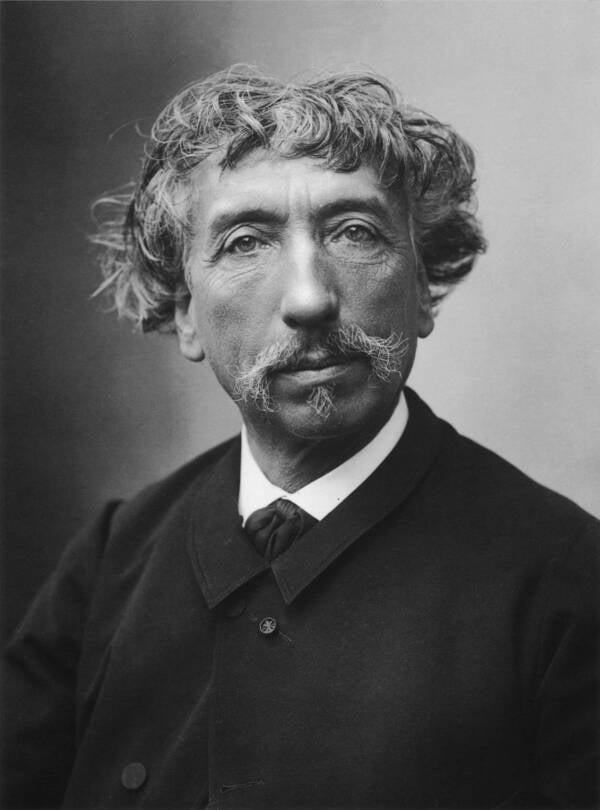 Wikimedia CommonsArchitect Charles Garnier spearheaded protests against the Eiffel Tower, which culminated in a dramatic petition.

The widely circulated petition was published on Valentine's Day in the local publication Le Temps and made the group's stance clear about the "gigantic black factory chimney" that they were certain would become an eyesore:

We have come, writers, painters, sculptors, architects and passionate devotees of the hitherto untouched beauty of Paris, to protest with all our strength, all our indignation, in the name of slighted French taste...against the erection, in the heart of our capital, of this useless and monstrous Eiffel Tower...Will the city of Paris go on to associate itself with the baroques, with the mercantile imaginations of a machine builder, to become irreparably ugly and dishonor itself? For the Eiffel Tower, which commercial America itself would not want, is, doubtless, the dishonor of Paris. Everyone feels it, everyone says it, everyone deeply grieves it, and we are only a weak echo of the universal opinion, so legitimately alarmed.

But Gustave Eiffel saw it differently. He believed his design, if successfully carried out, would be a monumental feat for society. He asserted that if one were to dismiss his tower, one might just as easily dismiss the ancient pyramids of Giza, since they were "only artificial mounds of dirt."

"We are not simply the country of entertainers," Eiffel argued, "but also that of engineers and builders called from across the world to build bridges, viaducts, stations and major monuments of modern industry, the Eiffel Tower deserves to be treated with consideration."

Fortunately for him, the French government felt the same way and construction on the Eiffel Tower began in earnest in January 1887. 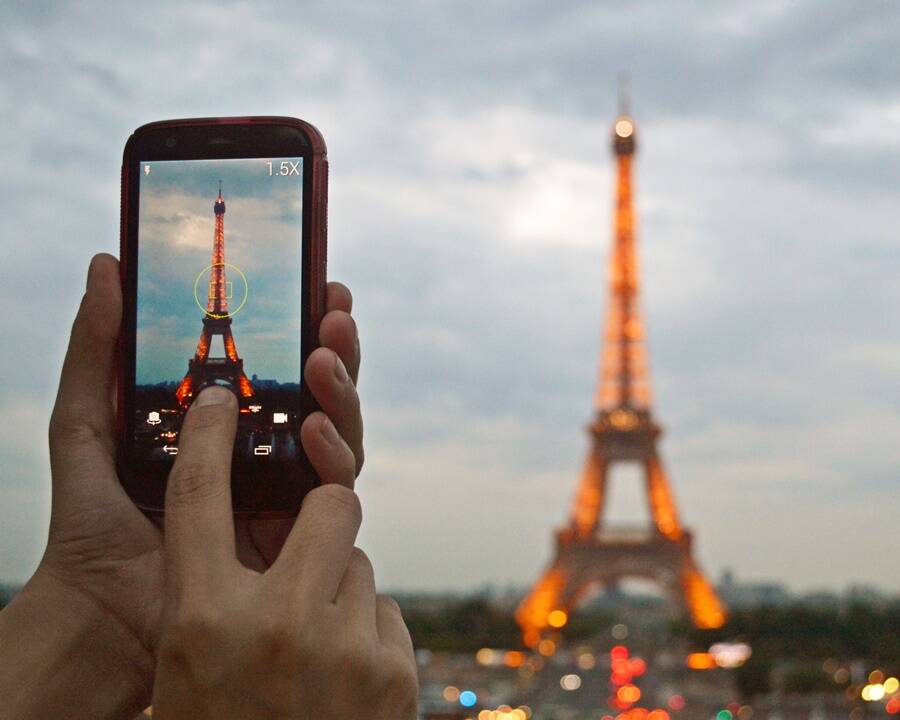 Wikimedia CommonsDespite its rough beginnings, the Eiffel Tower is now a beloved icon of Paris.

While Gustave Eiffel may have exaggerated its architectural significance, the construction of the Eiffel Tower was indeed a monumental undertaking.

Due to the tower's unprecedented height, construction workers had to use moveable cranes, pyramidal scaffolds, and elevators to move 200 builders and the materials higher and higher as the tower was completed.

The construction of the Eiffel Tower was completed on March 31, 1889, just in time for the World's Fair. Despite initial protests, the impressive landmark that was once decried as a monstrosity slowly become France's most celebrated symbol.

The Eiffel Tower eventually lost its title as the world's tallest structure after the Chrysler Building was erected in New York City in May 1930. Yet well over a century since its completion, the landmark remains the greatest emblem of Parisian elegance, and it continues to attract about 7 million visitors every year.

In contrast to its present-day popularity, Guy de Maupassant's iron disdain for the structure remained unwavering until his death four years after the monument's completion. He would boast to others that he often took his lunch inside the Eiffel Tower because "it's the only place in Paris where I don't have to see it."

Now that you've learned about why the Eiffel Tower was built, take a look at 33 photos from the liberation of Paris. Then, enjoy the Paris of the 1960s with these 44 striking photos.