The Gruesome Reason Why Chainsaws Were Invented

The chainsaw was invented to more safely perform a brutal surgery known as a symphysiotomy on laboring women, during which the birth canal was widened with a hand-cranked, rotating blade.

Chainsaws are great for cutting down trees, pruning overgrown bushes, or even carving ice. But the reason why chainsaws were invented might shock you.

The answer goes back to the 1800s — and it’s unsettling. Indeed, chainsaws were not invented by inventive landscapers but instead were created by doctors and surgeons. 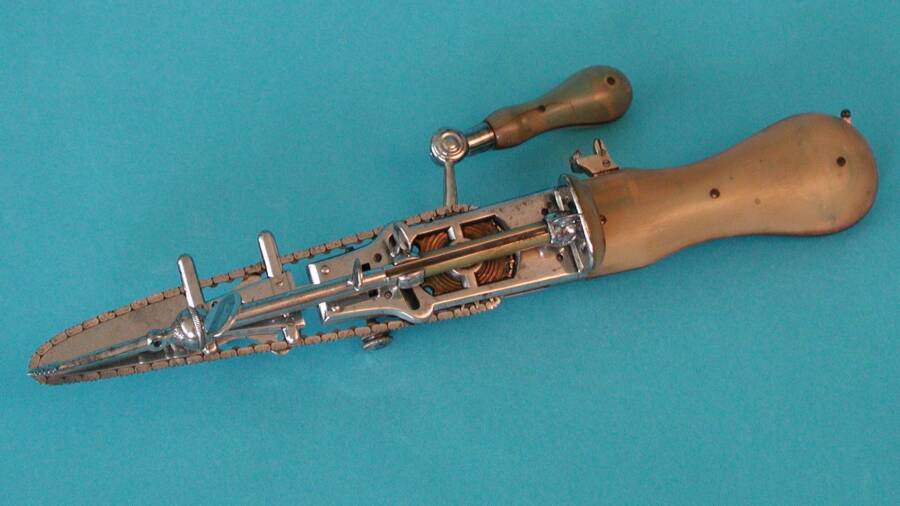 Sabine Salfer/Orthopädische Universitätsklinik FrankfurtThe reason why chainsaws were invented might shock you. The chainsaw’s original use was nothing short of gruesome.

Of course, that meant these fast-rotating blades weren’t originally used on trees, but rather the first chainsaws played a role in childbirth.

Why Chainsaws Were Invented

Childbirth has presented a bevy of challenges throughout human history. Though childbirth is safer now with a global rate of 211 maternal deaths per 100,000 live ones, an alarming number of women and babies have succumbed in the past.

A mother dying before childbirth was such a challenge in the Roman era that a law was actually put into place which decreed that physicians must attempt a dangerous procedure known as a “Cesarean” on dead or dying mothers in order to save the baby. 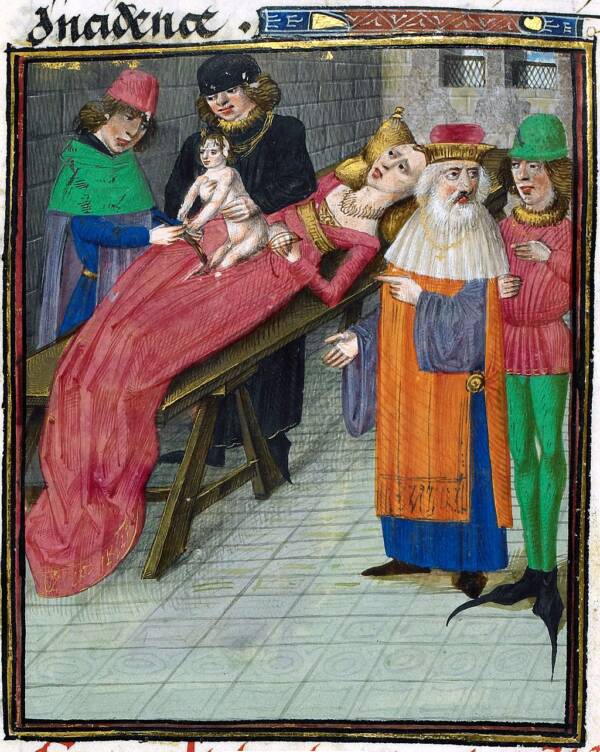 Dubbed a Cesarean for the fact that it was Emperor Caesar who allegedly wrote the law, the procedure required a physician to cut open a dying mother and remove the infant. For centuries, cesarean sections were a last resort as it was unlikely that physicians could save the lives of both mother and child, so the procedure prioritized the baby’s life over the mother’s.

But rumors claimed that a cesarean section could save both lives. In 1500, a Swiss veterinarian reportedly saved his own wife and child with a C-section, though many treated the tale with skepticism.

Then in the 19th century, medical advancements like hygiene hinted at the possibility of saving both mother and child during a cesarean. But in an era before anesthetics or antibiotics, the abdominal surgery remained intensely painful and perilous.

It didn’t help that the surgery had to be completed either by tearing into the woman’s uterus by hand or using scissors, neither of which were often fast enough to spare the mother pain or save the baby’s life. 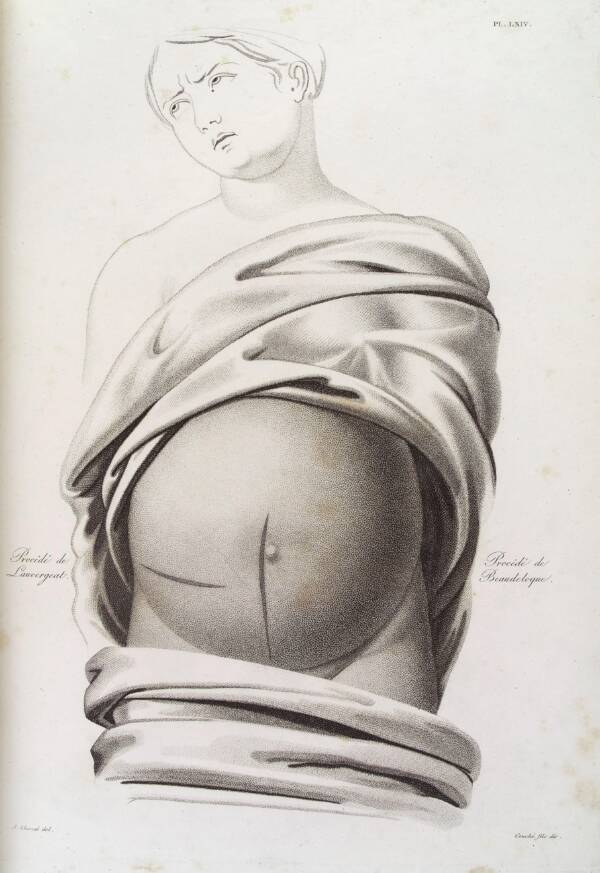 Indeed, the same year that the medical chainsaw was invented, Dr. John Richmond published this horrifying tale of a failed cesarean.

After hours of labor, Richmond’s patient was at death’s door. “Feeling a deep and solemn sense of my responsibility, with only a case of common pocket instruments, about one o’clock that night, I commenced the cesarean section,” Richmond related.

He cut into the woman using a pair of scissors. But Richmond still could not remove the child. “It was uncommonly large, and the mother very fat,” Richmond explained, “and having no assistance, I found this part of my operation more difficult than I had anticipated.”

Over the mother’s agonizing cries, Richmond declared “a childless mother was better than a motherless child.” He declared the baby dead and removed it piece by piece. After weeks of recovery, the woman lived.

Richmond’s horrific story helps answer the question of why chainsaws were invented originally as a more humane alternative to the C-section.

The First Devices That Replaced C-Sections 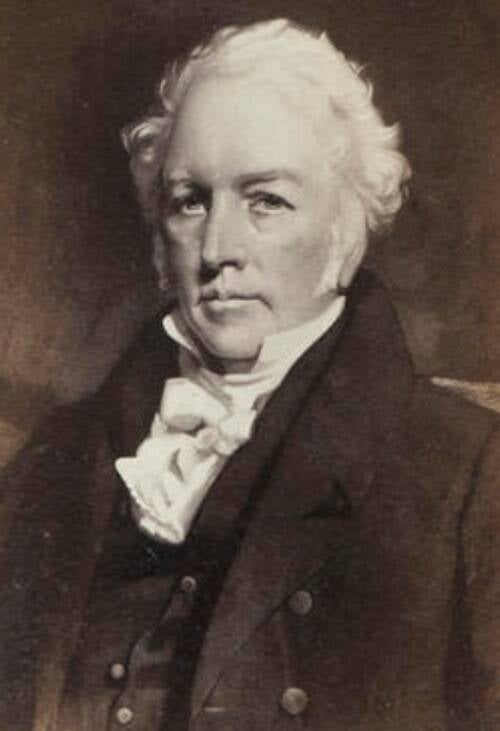 John Graham Gilbert/Wikimedia CommonsDr. James Jeffray, who is credited with inventing the chainsaw. Jeffray ran into trouble for reportedly buying bodies to dissect.

Around 1780, Scottish doctors John Aitken and James Jeffray came up with what they hoped would be a safer alternative to C-sections. Instead of cutting into the abdomen, they would cut into the mother’s pelvis in order to widen her birth canal and remove the baby vaginally.

The procedure was known as a symphysiotomy, and it is no longer in use today.

But a sharp knife was often not fast and painless enough to perform this surgery safely. So Aitken and Jeffray consequently envisioned a rotating blade that could cut through bone and cartilage, and thus, the first chainsaw was born.

Initially small enough to fit in a doctor’s hand, the original chainsaw was more like a small serrated knife attached to a hand crank. And though it sped up the process of widening a laboring mother’s birth canal, it too proved too dangerous for most doctors to attempt.

However, Aitken and Jeffray were not the only doctors of their era to innovate with medical chainsaws.

About 30 years after Aitken and Jeffray’s invention, a German child named Bernhard Heine began experimenting with medical devices. Heine came from a medical family, his uncle Johann Heine manufactured artificial limbs and orthopedic devices, for instance, and so he spent most of his childhood learning how to construct different orthopedic tools.

While his uncle focused on the technical side of orthopedics, Heine studied medicine. After gaining surgical training, Heine specialized in orthopedic surgery. That’s when he saw a way to blend his medical training with his technical skills.

In 1830, Johann Heine invented the chain osteotome, a direct ancestor to the modern chainsaws of today.

Osteotomes, or tools used to cut bone, used to be chisel-like and hand operated. But Heine added a chain to his crank-powered osteotome, creating a faster and more effective device.

The Original Uses Of Chainsaws 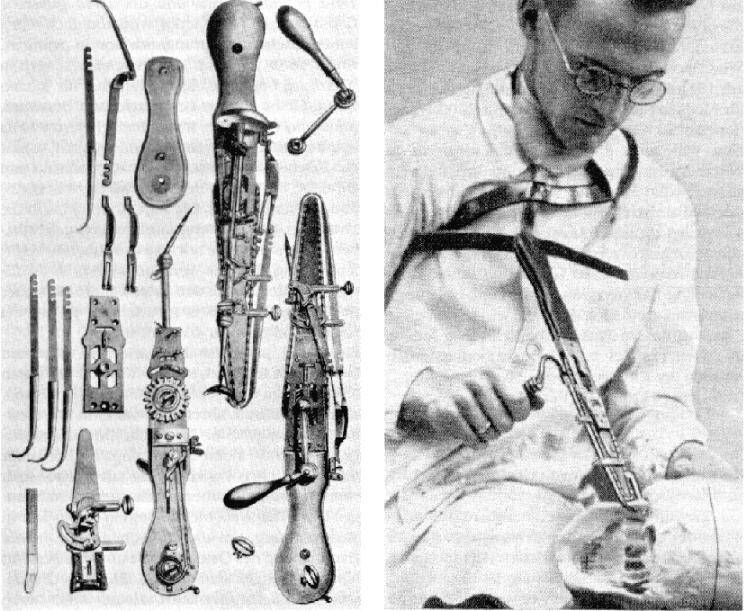 Wikimedia CommonsA demonstration of how physicians used the chain osteotome to cut through bone.

Johann Heine considered the medical applications of his invention carefully, and therefore it came to be used for a variety of surgeries.

Heine added guards on the edges of the chain to protect the surrounding tissue, so surgeons could now cut into the skull without causing bone splinters or destroying soft tissue. It vastly improved any medical procedure that required cutting through bone, such as 19th-century amputations.

Before the chain osteotome, surgeons used a hammer and chisel to take off a limb. Alternatively, they might use an amputation saw that required jarring motions. The medical chainsaw simplified the procedure and improved results.

Consequently, the osteotome became incredibly popular. Heine won a prestigious award in France and earned an invitation to Russia to demonstrate the tool. Manufacturers in France and New York began making the surgical instrument en masse. 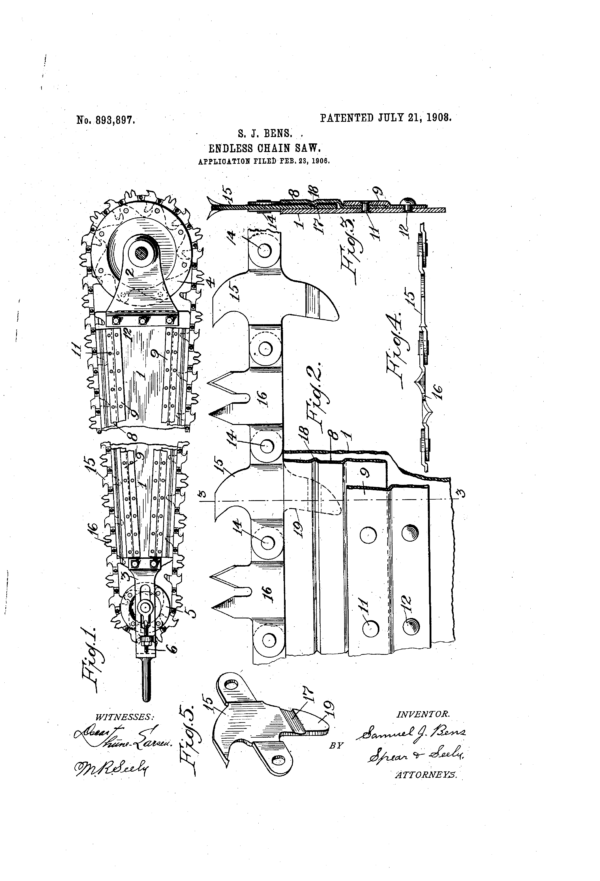 In the case of amputation, the medical chainsaw certainly surpassed a hammer and chisel. Yet in childbirth, the chainsaw was not the best solution to an age-old problem. Instead, sterile surgical environments, anesthesia, and access to more advanced medical care saved more lives in childbirth.

And in 1905, an inventor named Samuel J. Bens realized that the medical chainsaw could cut through redwood trees even better than it could bone. He filed a patent for the first recognizably modern chainsaw.

Thankfully, the era of using chainsaws to help women survive labor was short-lived.

After this look at why were chainsaws invented and what the chainsaw’s original use was, read about James Barry, the famed 19th-century doctor who was secretly born a woman. Then learn about these fascinating accidental inventions.