Ryan Utterback, 29, has been charged with second-degree child molestation, fourth-degree domestic assault, and a misdemeanor charge of furnishing pornographic material to a minor. 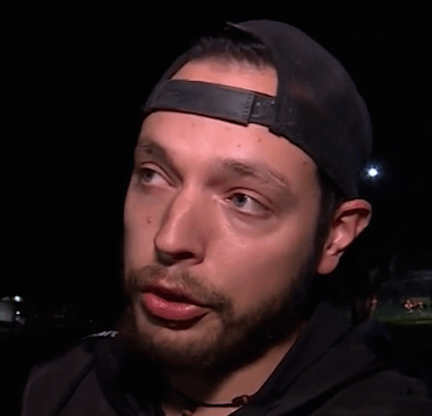 KMBCRyan Utterback told local news that “only I have the intimate understanding of what is and isn’t appropriate for my children.”

At a school board meeting in the fall of 2021, North Kansas City father Ryan Utterback supported banning certain LGBTQ titles from the school district’s libraries. Now, the 29-year-old is facing multiple charges, including molesting a child under the age of 12 and showing a four-year-old pornography.

Last fall, Utterback told KMBC that books with sexual themes like Fun Home by Alison Bechdel — which became a Tony Award-winning musical — and All Boys Aren’t Blue by George M. Johnson, don’t belong in the classroom.

“Those conversations are to be had at home,” he said at the time, “and only I have the intimate understanding of what is and isn’t appropriate for my children.”

The decision to ban those particular books was reversed after students pushed back. “I definitely understand their struggles,” Utterback added about the student protestors. “It’s not lost on me.”

Since then, however, Utterback has been arrested. According to KMBC, he faces a felony charge of second-degree child molestation, a misdemeanor of fourth-degree domestic assault, and a misdemeanor charge of furnishing pornographic material or attempting to furnish to a minor in a separate case.

According to a probable cause statement, Utterback laid down with and fondled a child younger than 12. He also put the child on his lap and moved the child against him. In another incident, he put his finger through a hole in a teenager’s jeans and rubbed their leg, which the teenager told authorities they “didn’t like … at all.”

Additionally, Utterback also faces charges of showing sexual videos on his cell phone to a child around the age of four.

Though neither Utterback nor his attorney have offered any comment on the charges, many in the community have reacted to his arrest.

“When I heard about that, the irony was just really there. Haha,” Gladstone, Missouri resident Parker Christian said according to Fox 4 Kansas City. Christian also started a Facebook page about the case and a petition to get Utterback’s bond revoked, which was denied.

“At the end of the day, if I can bring this to light, then maybe I can keep them safe in the future,” Christian told Fox 4.

Other members of the community reacted to the charges against Utterback with horror, including James Richmond, the president of the Northland Parent Association. During the school board meeting to ban Fun Home and All Boys Aren’t Blue, Richmond spoke passionately about removing the books from public libraries as Utterback held his signs. 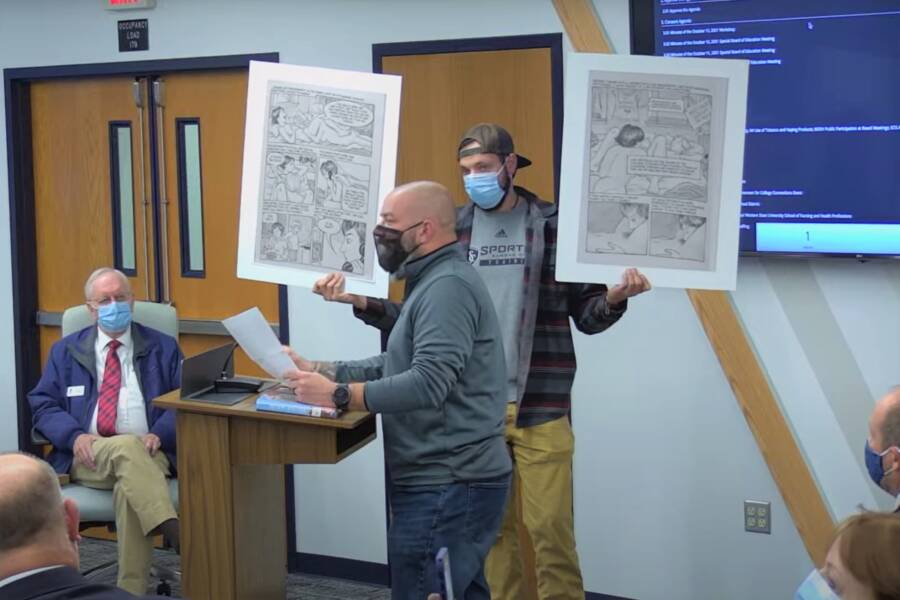 NKC School District Board of EducationRyan Utterback holding up enlarged pages from Fun Home during a 2021 school board meeting.

“Ryan was an attendee at the board meeting,” Richmond told Fox 4. “I needed help holding a presentation, and he helped. I can’t comment on the alleged charges against him, because I have no knowledge about them and they have nothing to do with me or the Northland Parent Association.”

According to the American Library Association (ALA), books with LGBTQ themes comprised half of the top 20 most challenged and banned books between 2010 and 2019. And the ALA says there’s been a surge in book ban requests in recent years.

“I’ve worked at ALA for two decades now, and I’ve never seen this volume of challenges come in,” Deborah Caldwell-Stone, the director of the ALA Office for Intellectual Freedom, told NBC.

“Book ban advocates have long tried to inaccurately claim that LGBTQ representation in books, films, TV, and ads is ‘unsuitable’ or ‘obscene,'” she explained, “while other media with narratives and themes about opposite-sex relationships — even those with graphic sex or violence — are not targeted.”

When it comes to Fun Home, All Boys Aren’t Blue, and the North Kansas City School District libraries, however, book ban advocates didn’t have their way. Fox 4 reports that both titles are back on the shelves.

As for Ryan Utterback? KMBC reports that he has pled not guilty to all charges. His case is still pending.

After reading about Ryan Utterback, the Missouri man who wanted to ban books with sexual situations or imagery, and now faces charges of child molestation, look through these books, films, and ads that have been banned in America. Or, see how detectives busted a Florida sex trafficking ring.