45,000 Wild Horses To Be Killed By U.S. Government To Save Money, Grazing Pasture 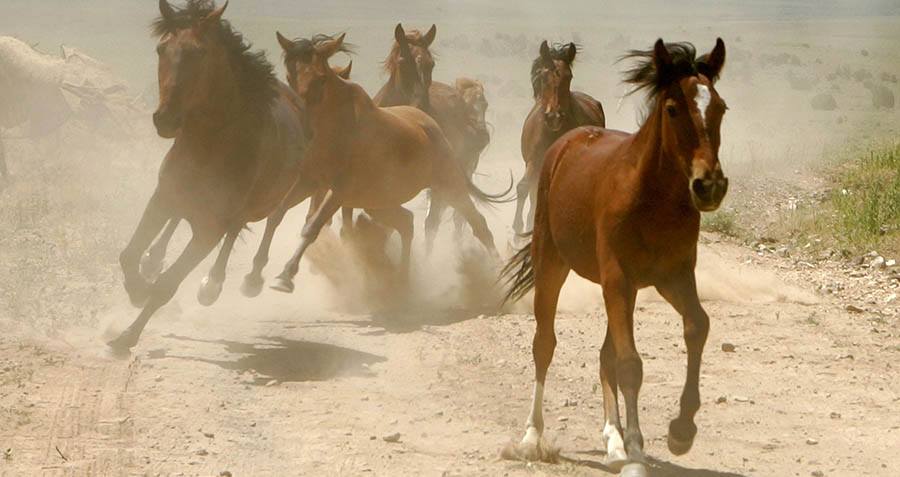 On Friday, the Bureau of Land Management’s (BLM) National Wild Horse and Burro Advisory Board voted in favor of killing 45,000 wild horses currently in government holding.

This decision has been a long time in the making. As Inhabitat reported, over the course of two decades the BLM has removed wild horses from their natural habitat so that privately owned cattle can graze on the land.

The horses obviously had to go somewhere, and so the BLM placed them in government-owned facilities across the United States. These facilities have generated problems of their own: Just in 2015, they cost taxpayers $49 million, nearly half of the horse and burro program’s budget.

In response to these costs, the view that wild horse populations are too high and will overgraze rangelands, the BLM advisory board voted to recommend that the horses be euthanized — a move which has generated harsh criticisms from animal rights activists.

As the Humane Society wrote on Friday in a press release, “The decision of the BLM advisory board to recommend the destruction of the 45,000 wild horses currently in holding facilities is a complete abdication of responsibility for their care. The agency would not be in this situation but for their long-term mis-management.”

For instance, BLM critics say that the wild horse “overpopulation problem” is a result of the BLM’s policy of rounding up and warehousing the horses, not a sign that the policy needs to add euthanasia to its management regimen.

Speaking to the House Subcommittee on Federal Lands this June, Ginger Kahrens, the director of the nonprofit Cloud Foundation, said that “Current management practices of round-up, removal and warehousing…cause compensatory reproduction — an increase in populations as a result of decreased competition for forage.”

She added that the problem lies not with the horses, but land use allocations. “Livestock outnumber horses and burros 47 to 1, and livestock are allocated 82 percent of the forage.”

In recent years, some have gone further than Kahrens in assailing the BLM’s horse roundup policy, saying that its concerns with horse overpopulation are based more in fiction than fact.

Even individuals who have worked for the BLM admit that the odds are not stacked in wild horses’ favor. “The wild horses are not getting a fair shake,” Bob Edwards, who worked for the BLM for 30 years as a natural resources specialist, told NBC News. “I don’t they have been given their proper place on the landscape in the American West.”

Still, some who work in the American livestock industry say that if the horses are not contained, they may face financial ruin.

“I’m on the range and I see what the damage is,” Utah rancher Fred Tolbert told NBC News. Tolbert pays the BLM for permits to graze his cattle with wild horses, and says he’s had enough of the horses’ overgrazing.

“If my cows don’t calve, I don’t make any money. There’s no feed, they’re not gonna have calves.”

Tolbert, like many ranchers, supports the idea of euthanasia, especially after they’ve been warehoused. “Let ‘em go to the slaughterhouse,” Tolbert said. “What value are they now? …They’re a drain. They’re a negative.”

Federal law actually permits the BLM to sell the horses without limitation, including for slaughter — though the body has come under fire for what some view as violating the Wild Free-Roaming Horses and Burros Act of 1971, which states that wild horses and burros “shall be protected from capture, branding, harassment, or death.”

Indeed, Laura Leigh of the Wild Horse Education advocacy group has taken BLM to court four times for what she views as inhumane treatment of the animals.

“It’s my observation that the government continually violates the provision of the act that requires humane handling of these animals,” Leigh told NBC News. “I feel that removing wild horses by helicopter stampede is inherently inhumane.”

Leigh is referring to how the BLM rounds up horses: helicopters hover over horses and drive wild horses into a trap, from which point horse families are split up and sent to separate holding facilities.

But critics say there are better ways to solve the population problem.

The U.S. Humane Society, for instance, has proposed adding fertility control to limit population growth. As of 2013, the BLM only devoted 1.5 percent of its wild horse budget to “population suppression,” like treating female horses with contraceptives, NBC News reported. The agency says that it hasn’t expanded that budget because the contraceptive they used was “not…as effective as we had hoped.”

Even though they have solutions at hand, people like Kahrens doubt the horse populations will be saved. “The BLM would like to see wild horses gone because with no wild horses, end of problem…wild horses will be managed to extinction.”

Next, learn how people get overpopulation wrong with people, too.