No Blacks And No Jews Allowed 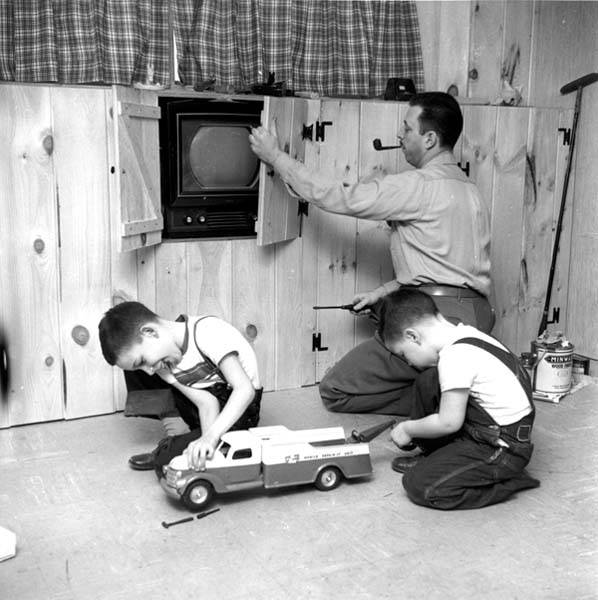 Library of CongressA father works in the rec room while his two boys play. Levittown, Pa. 1953.

“If we sell one house to a Negro family,” William Levitt said, justifying his rule to only sell to what he called the Caucasian race, “90 to 95 percent of our white customers will not buy into the community.”

Levittown thrived on conformity. Even after the community was dotted with its identical homes, William Levitt insisted that the people stay the same. His company dictated where every tree was planted and how every bush was trimmed. And, if anyone ever failed to keep their lawn in order, he sent them a bill.

And that went for the people, too. Even if it wasn’t spoken aloud, it was part of the sales pitch: Levittown was a town full of white-skinned newlyweds and their young children. It was a community where people looked the same. He’d promised his customers an “escape from the claustrophobia of city life,” but the real promise was an escape from its diversity.

He wasn’t a racist, William Levitt insisted — he was just a businessman, and he was willing to give up making a better world if he could make a few more dollars.

He might have been telling the truth. Before Levittown, he’d sold houses with a company policy never to sell to Jews — even though Levitt was Jewish himself.

And perhaps he was right about America, too: 1,400 families moved into the all-white community of Levittown within the first three hours of it opening its doors.

It was so popular that he soon built a second Levittown in Pa., this one with a few different styles of houses to choose from for a small hint of variety.

Ultimately, people flocked to every city that bore William Levitt’s name. Within a few years, he was one of the richest people in the world.

The families loved the communities that William Levitt had created — and, though none would say out loud that it was the conformity and segregation they clung to, little hints of it were coded into the praises they showered on their artificial towns. They called it a “private haven in a heartless world”, a place where “parents wouldn’t have to worry” about their kids.

It was a place where everyone was the same, and that made the people of Levittown feel safe. It was something they felt deep down, but wouldn’t say allowed — until that conformity came to an end, and the dark, secret underbelly of suburbia came out.