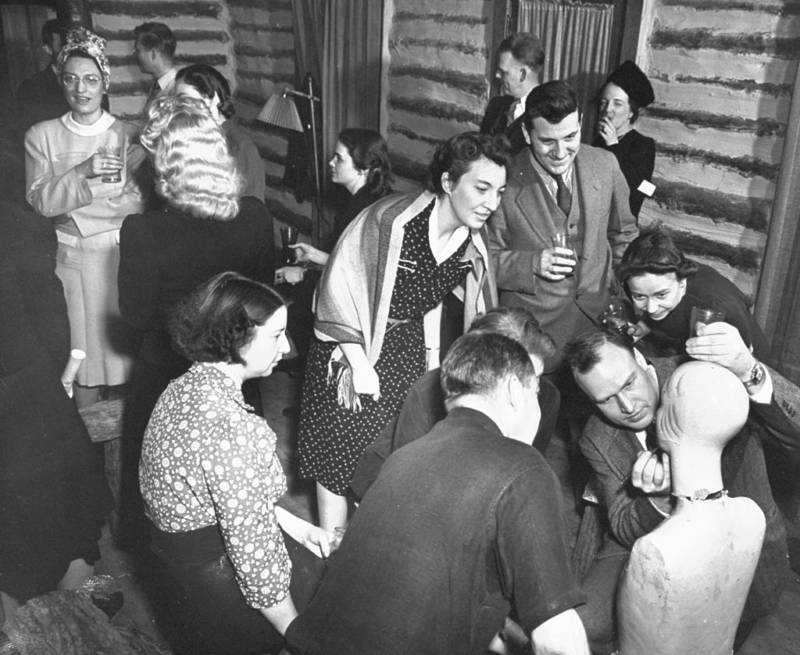 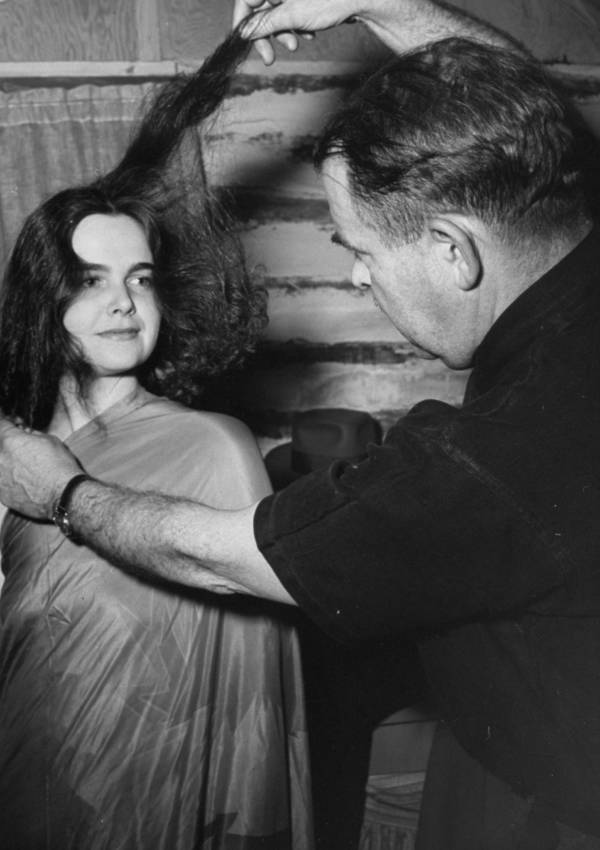 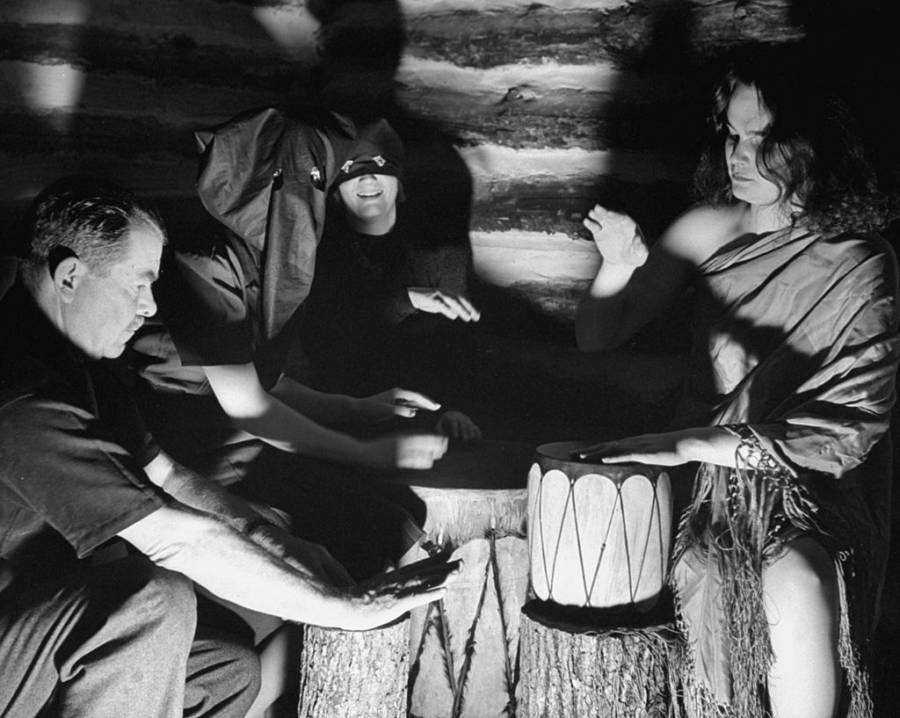 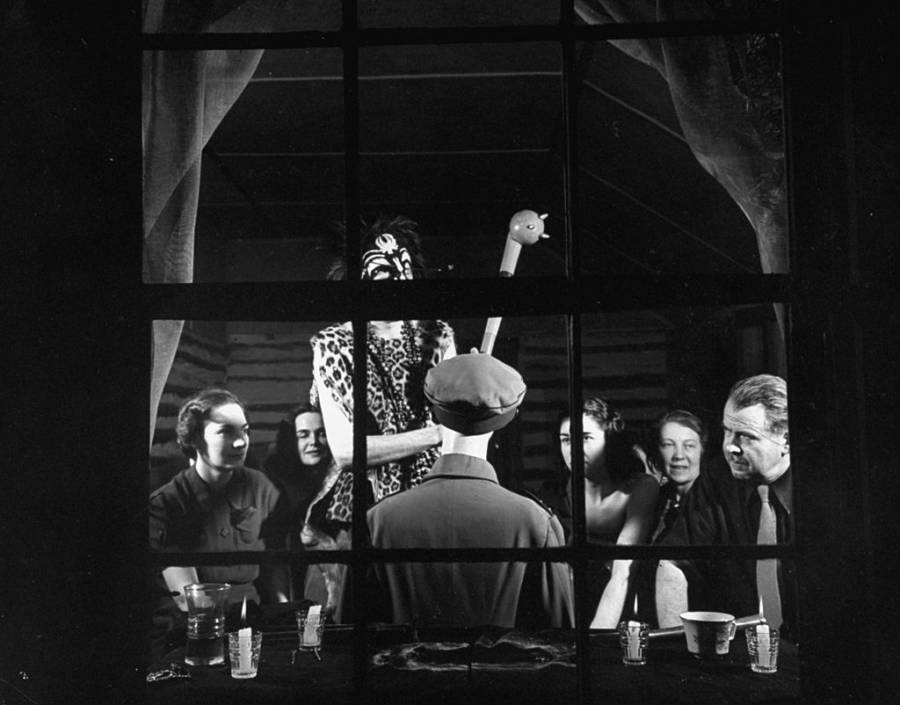 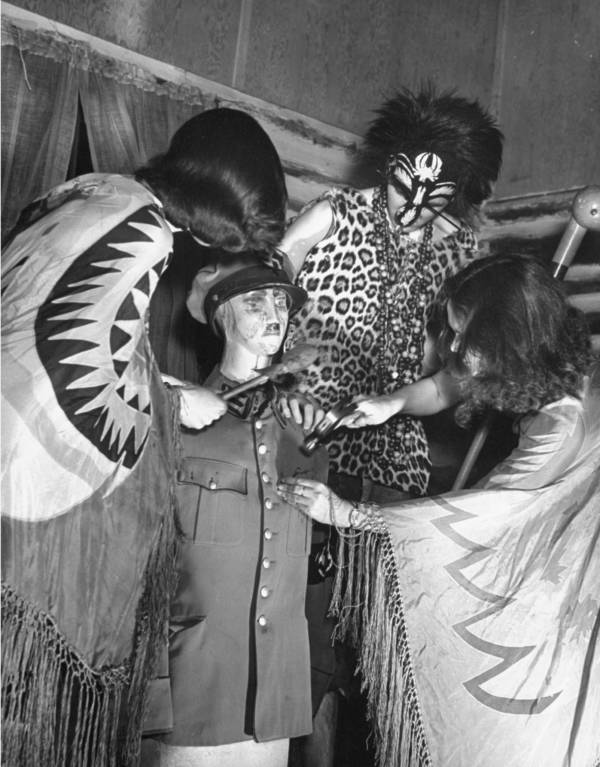 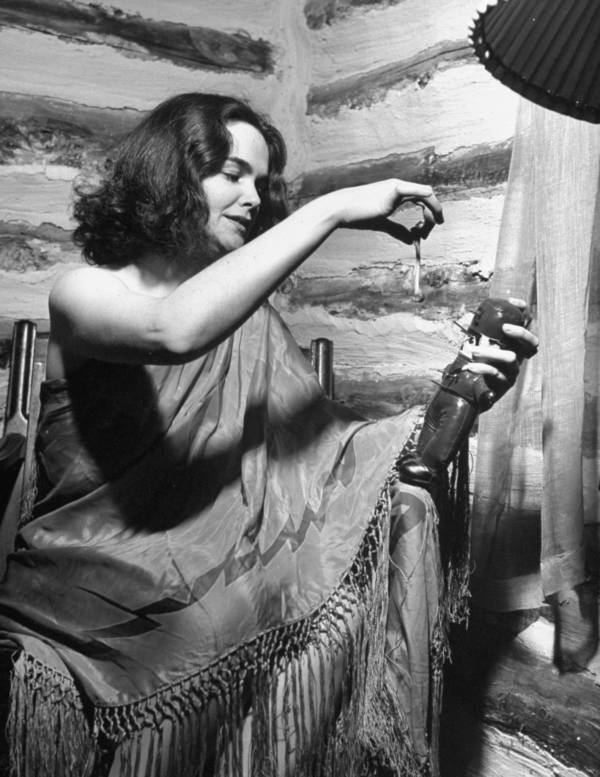 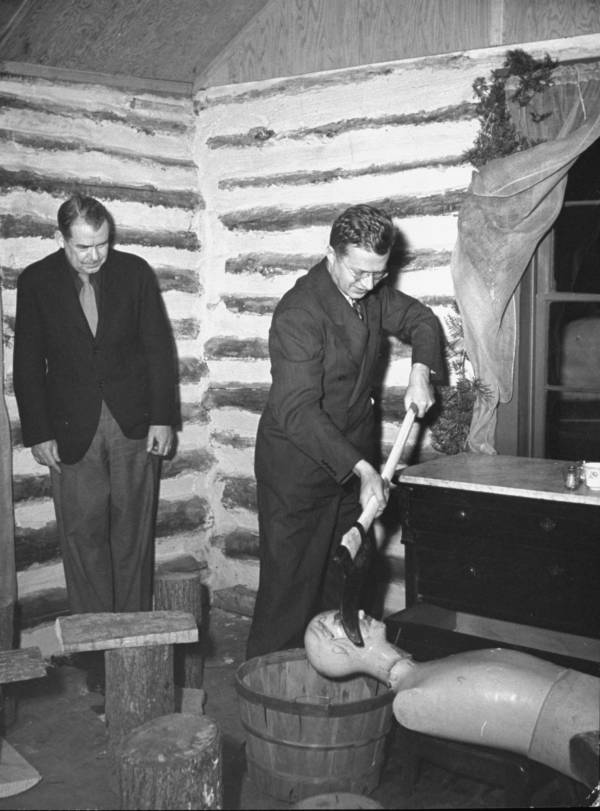 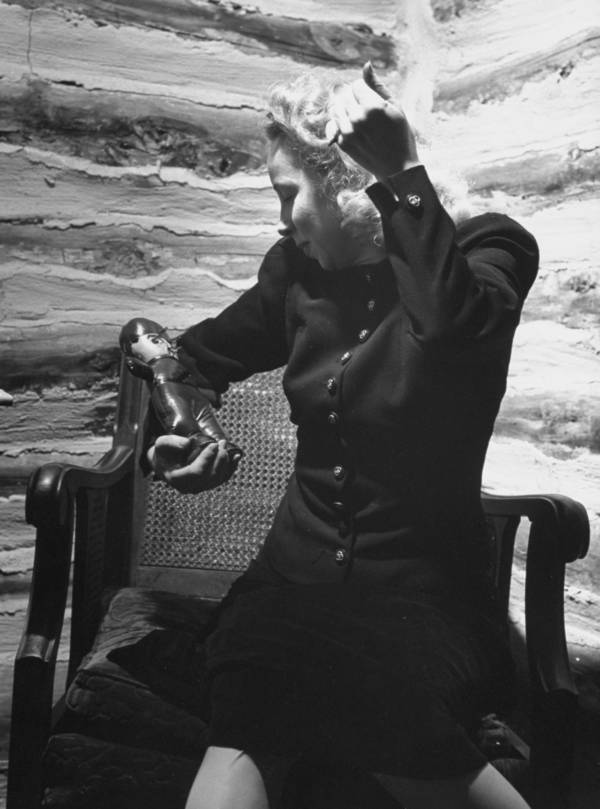 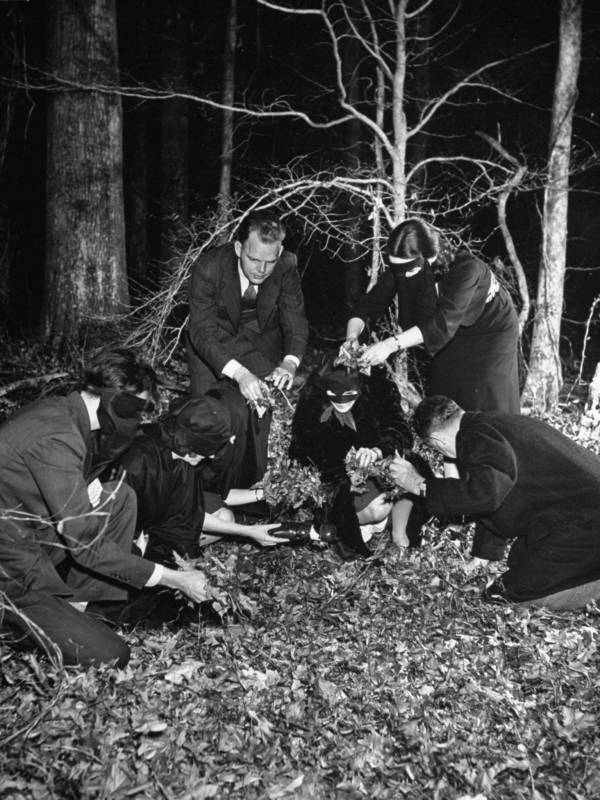 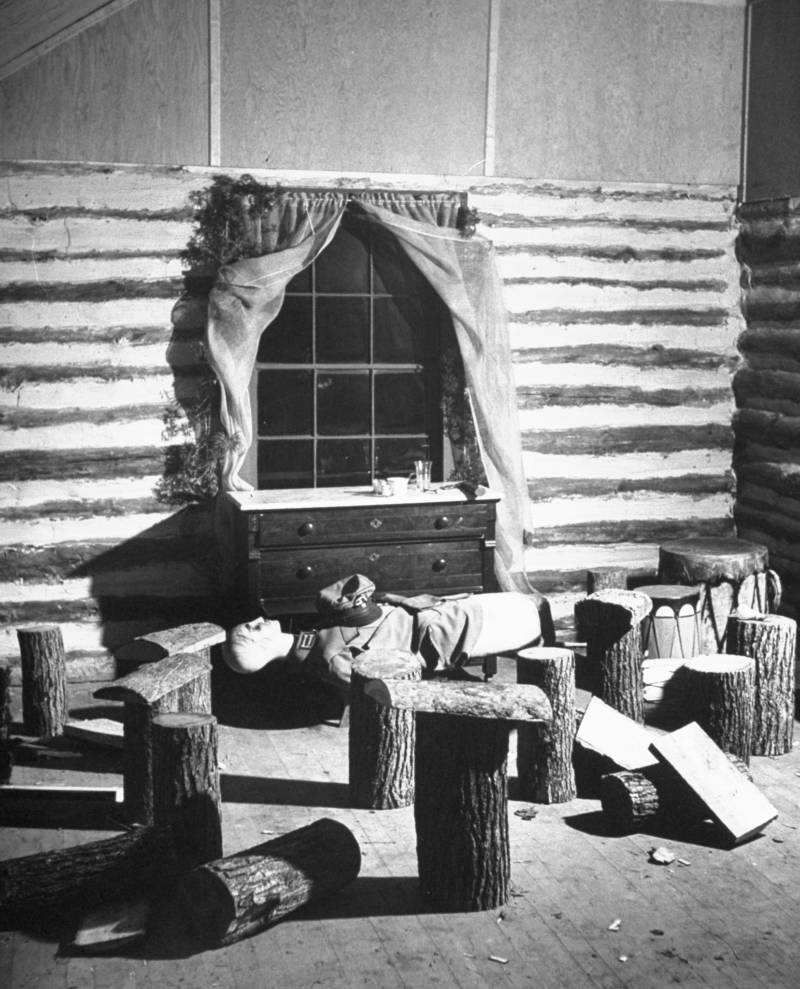 1 of 12
The hexing party gathers around to watch William Seabrook prepare the dummy. On January 22, 1941, a group of young people went out into a cabin in the woods of Maryland and tried to kill Adolf Hitler.

Their weapons were a dressmaker’s dummy, a Nazi uniform, a few axes, a box of nails, plenty of rum, and a strong faith in the dark powers of voodoo magic.

They really believed that the powers of their dark voodoo magic would be able to hex Hitler and send him to hell – and they brought a LIFE magazine photographer along to document the whole thing.

It takes a strange person to go out into the woods of Maryland and try to curse Adolf Hitler with voodoo magic — and there likely has never been a stranger person than the man who did it, William Seabrook.

Seabrook was an author, a traveler, an occultist, and a member of the Lost Generation, but all those accomplishments were eclipsed and forgotten when he ate human flesh.

Nearly two full decades before the hexing party, William Seabrook made his name as a cannibal. He traveled out to West Africa and met with a cannibal tribe, who he begged to let him try the taste of human flesh. When they refused, he had a friend steal human flesh from a hospital. Then he fried it up, ate it, and wrote about the experience.

“It was like good, fully developed veal,” Seabrook wrote in his book Jungle Ways, describing the taste of human flesh. “I think no person with a palate of ordinary, normal sensitiveness could distinguish it from veal.”

Strange as he was, William Seabrook had his fans. A group of young people living in Washington, D.C. read his book Witchcraft: Its Power in the World Today, in which Seabrook detailed everything he’d learned about Satanism and Haitian Voodoo, and became inspired. Dark magic, they believed, was real — and they could use it for good.

The group called Seabrook and asked for his expertise. Seabrook, never one to turn down a new experience, readily agreed to join — as did LIFE.

“Voodoo incantations,” the magazine explained, repeating Seabrook’s justification, “succeed only when the intended victim knows that they have taken place.” Life was there to make sure Hitler found out about it — and to encourage readers at home to hold hexing parties of their own.

William Seabrook and his group dressed up their dummy in a Hitler costume. Then one attendee named Ted Caldwell, dressed up in a witch doctor’s robe, shook a rattle above its head, chanting at the dummy, “You are Hitler! Hitler is you!”

“Istan!” the revelers called out, demanding the help of a dark pagan god. “Send 99 cats to claw his heart out and 99 dogs to eat it when he’s dead!”

When it was all done, William Seabrook and his friends buried the Hitler dummy deep in the earth. There, they declared, the worms would eat away at the dummy and thus bring down the real man himself.

Seabrook urged the photographers to include as much detail as they could so that people around the world could follow his lead. “For those who may wish to hold Hex Hitler parties at home,” LIFE wrote, “Mr. Seabrook points out that a life-size image is unnecessary.” A small doll could easily be dressed up as Hitler, they explained, and could be picked up at any five-and-dime.

Hitler, of course, did not die in 1941. He would live on for three more years before killing himself in an underground bunker in Berlin on April 30, 1945.

William Seabrook’s own fate wouldn’t prove too different. A year after Hitler’s death, Seabrook killed himself with a fistful of pills in Rhinebeck, New York. He left behind, though, one of the strangest lives that any man has ever lived.

Next, check out some of the most eye-popping photos of witch doctors around the world. Then, see the most truly bizarre photos in history.