These interesting facts about William Shakespeare will change everything you thought you knew about the infamous bard. 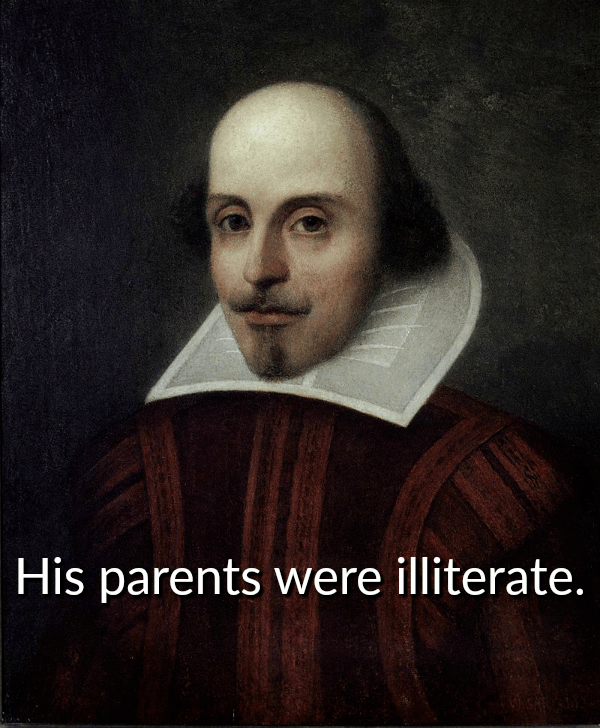 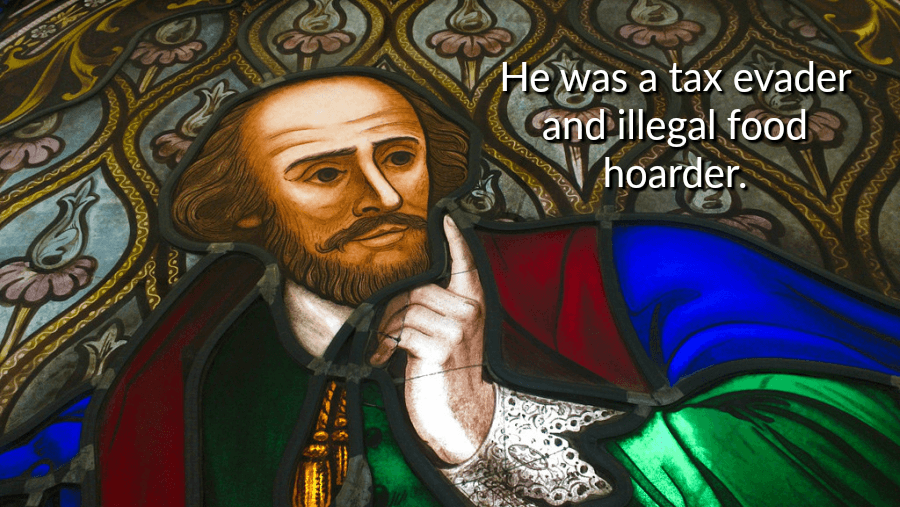 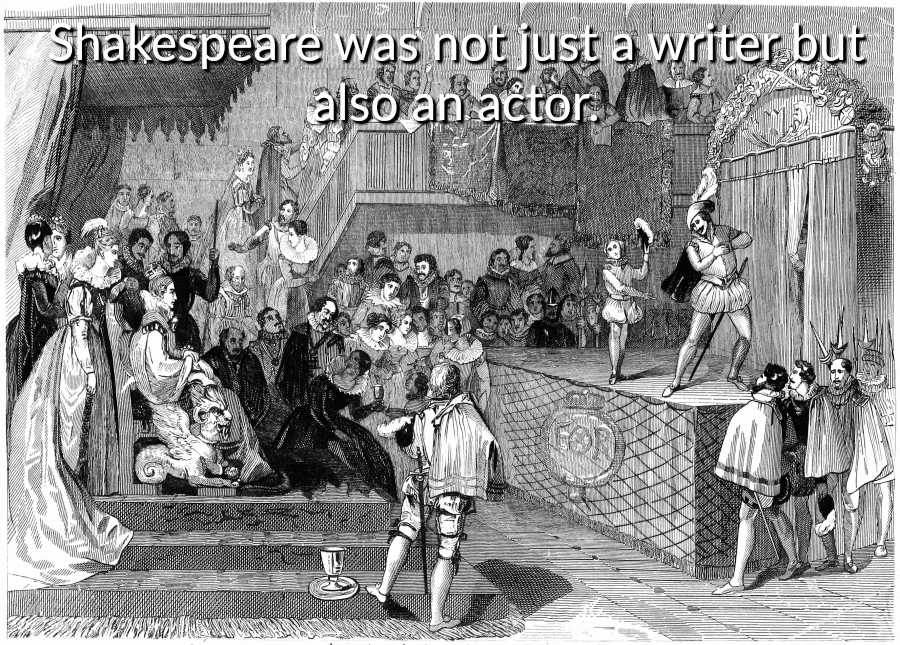 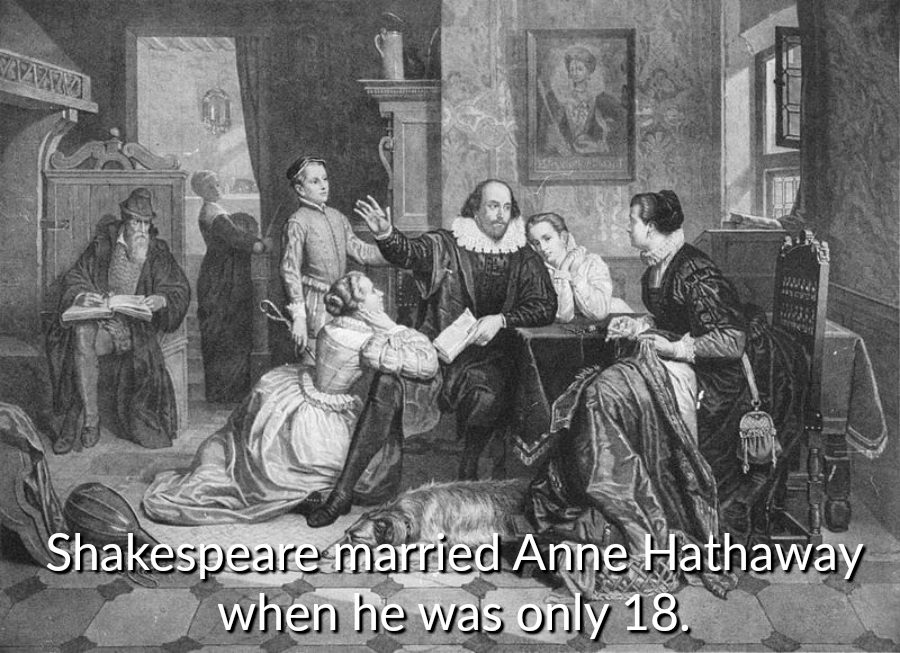 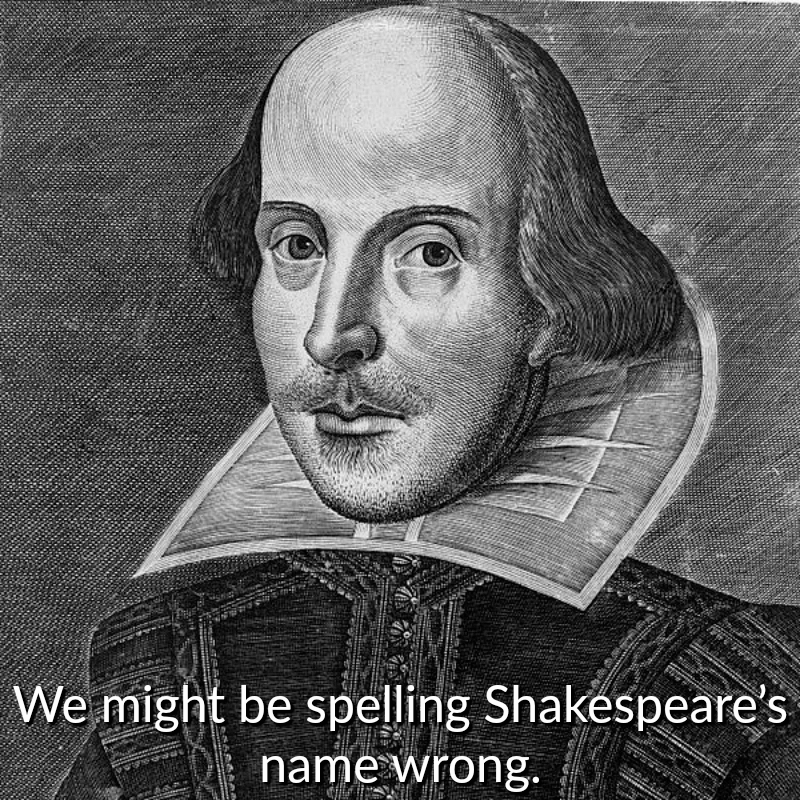 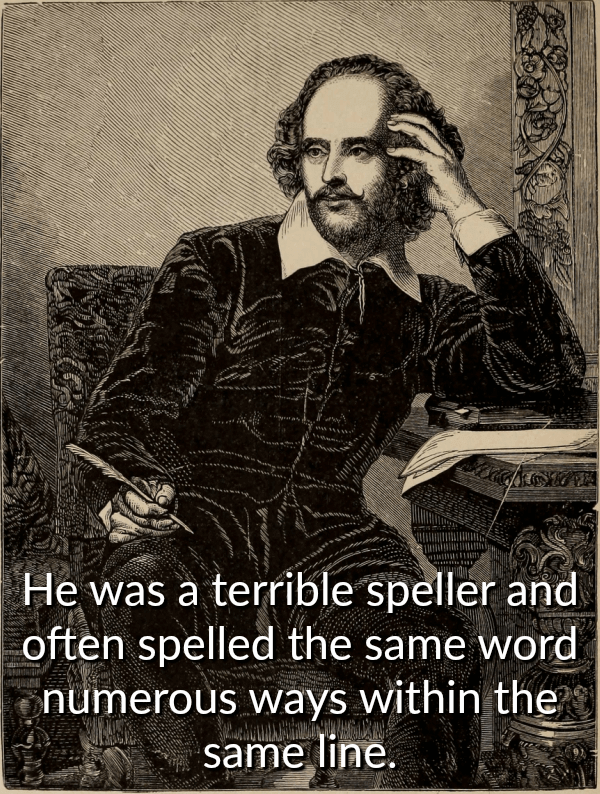 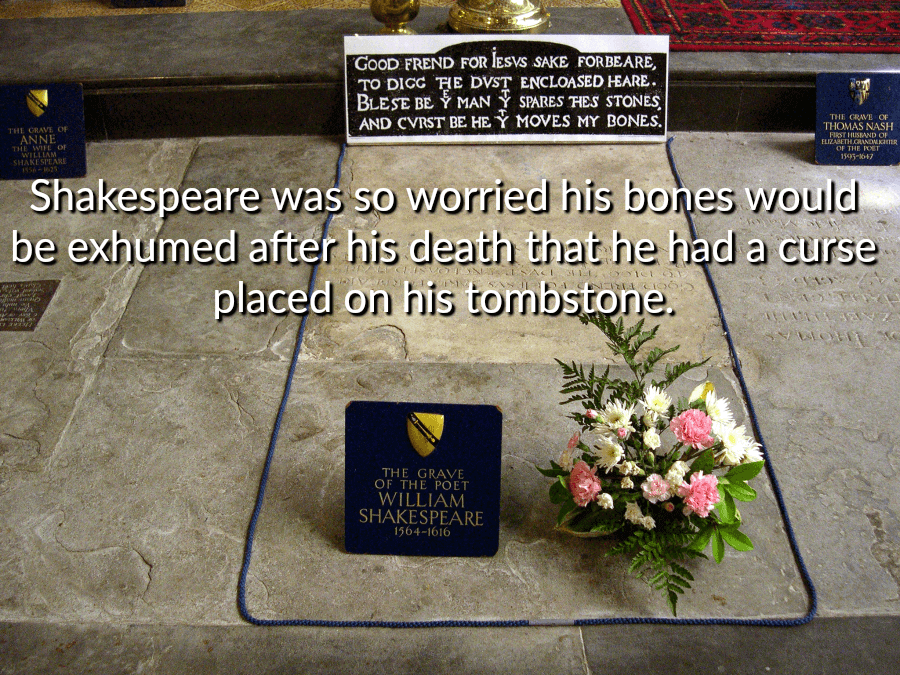 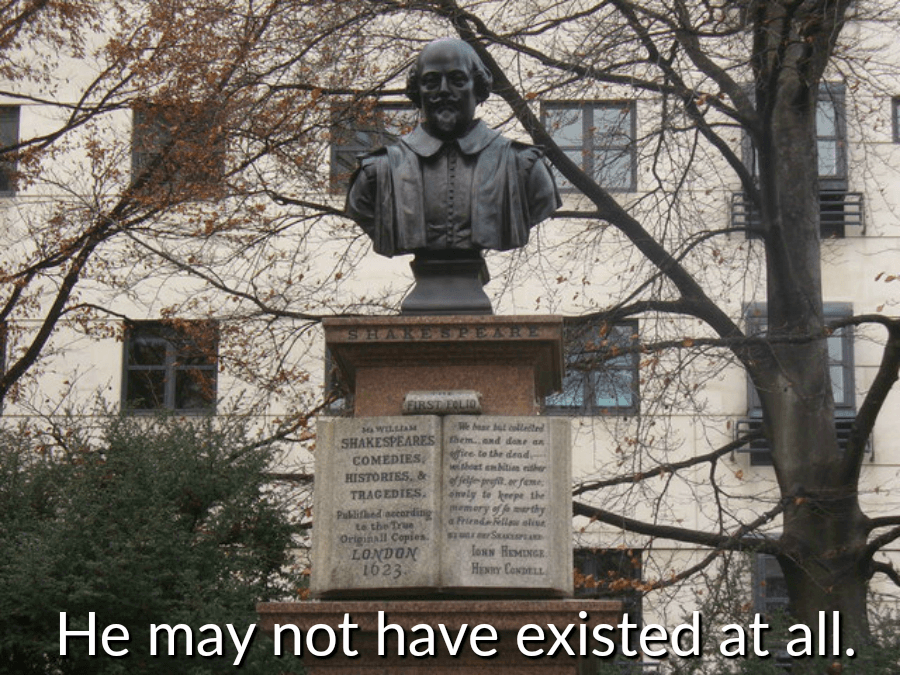 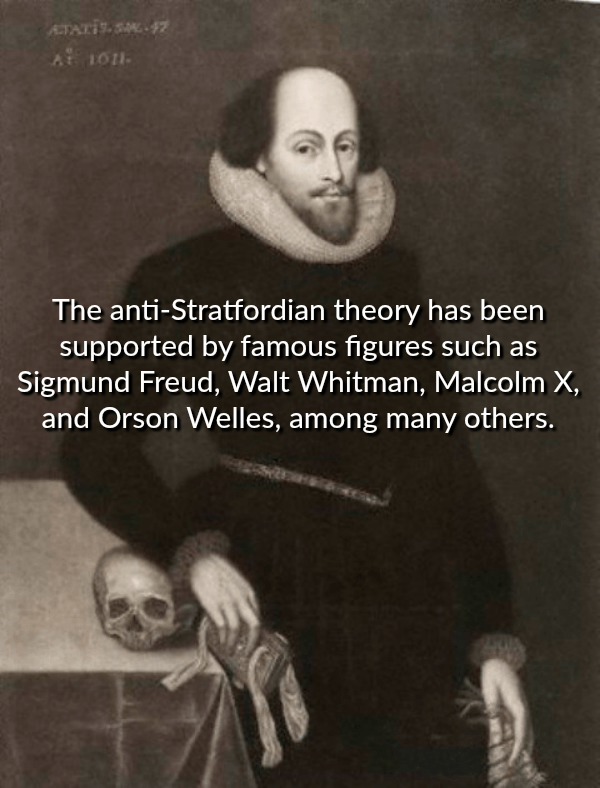 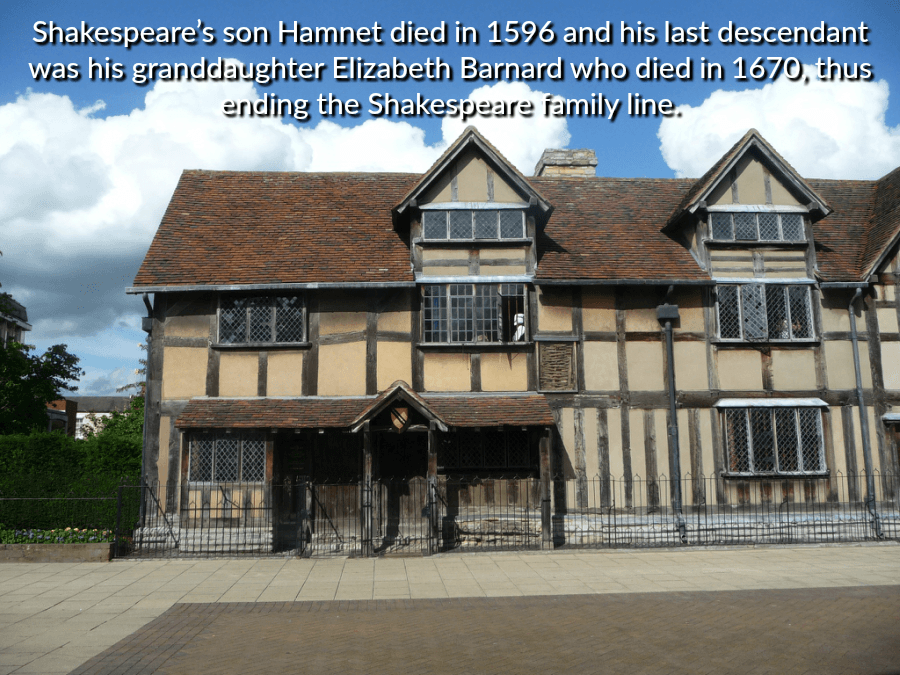 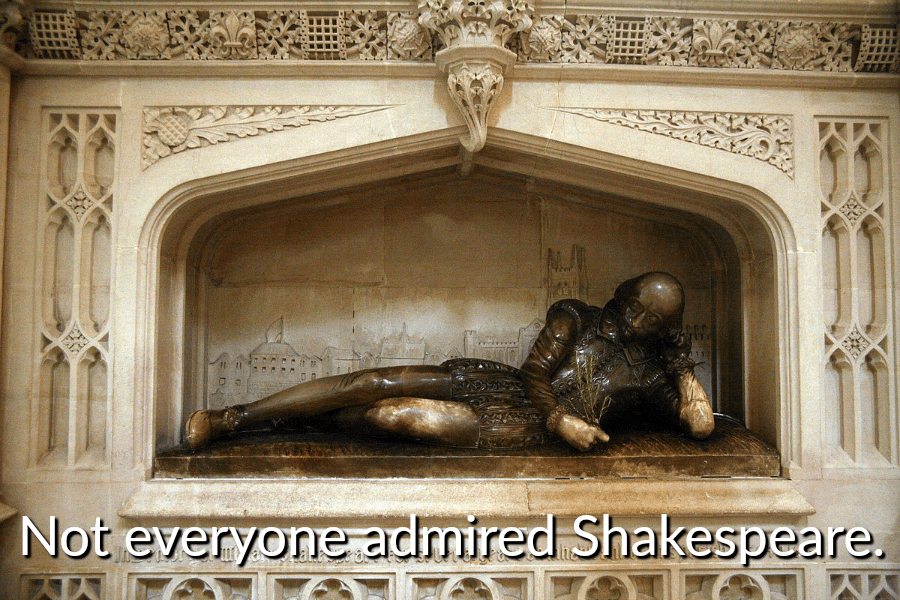 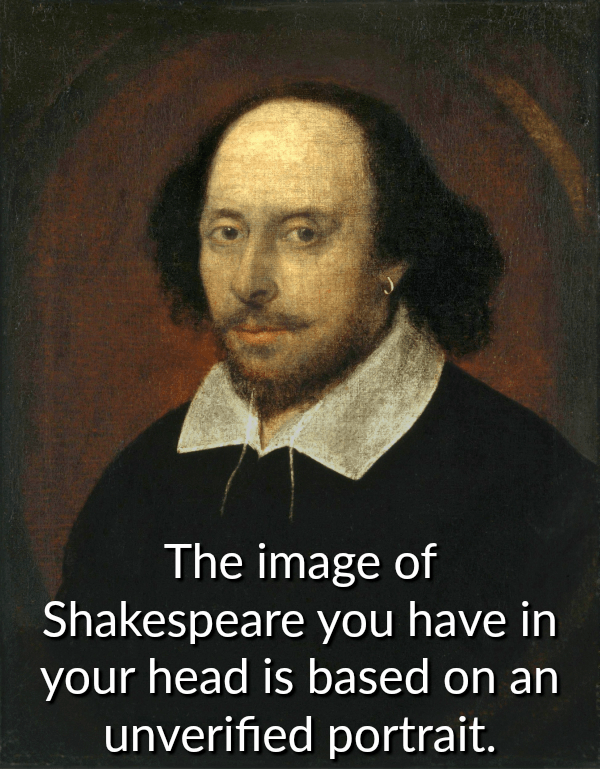 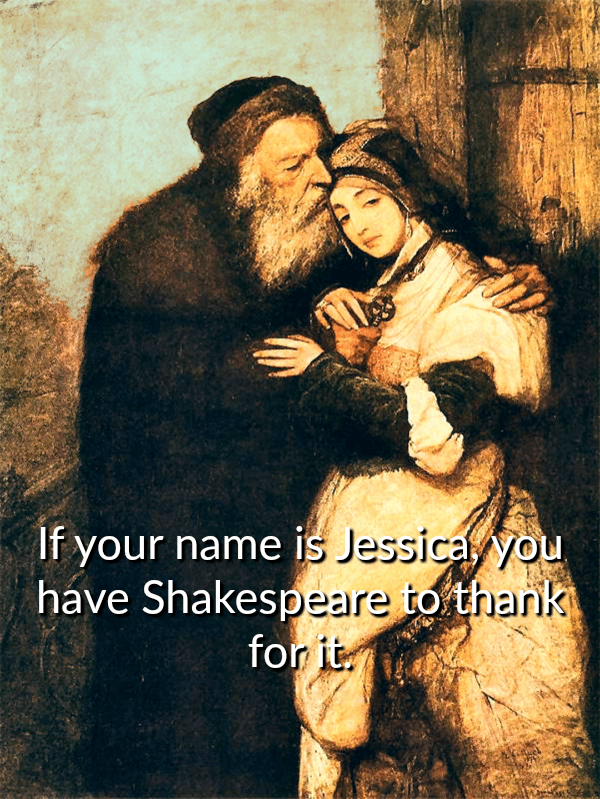 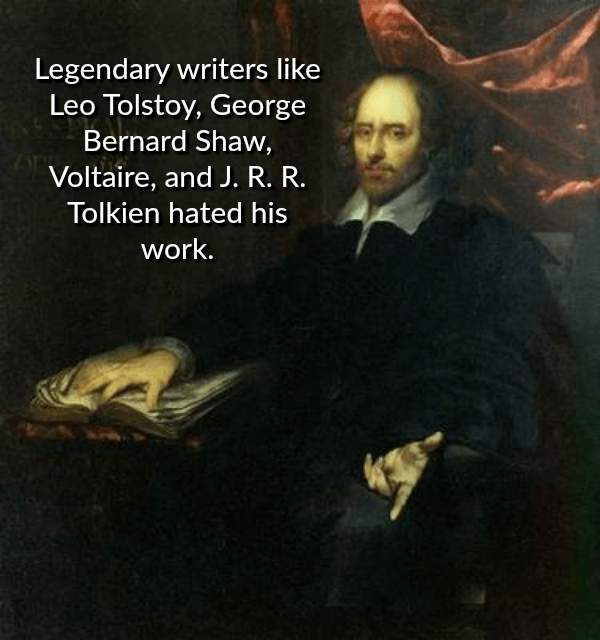 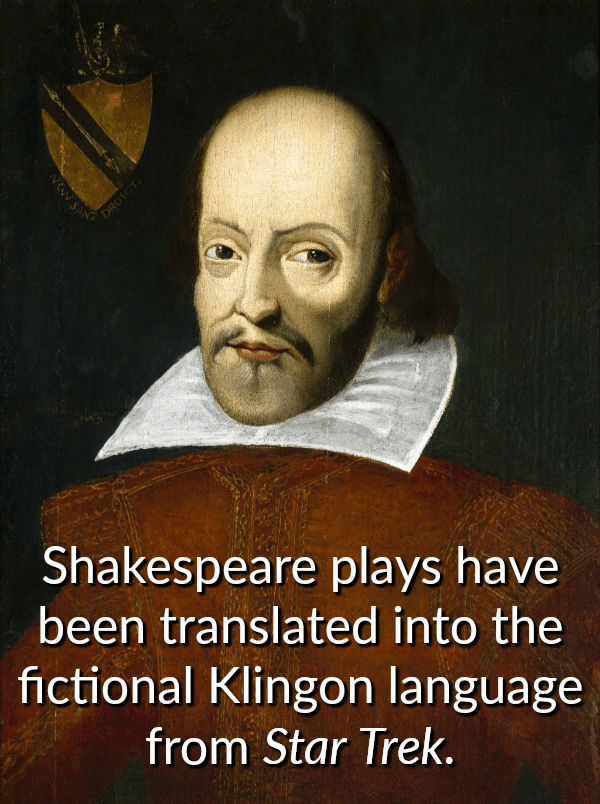 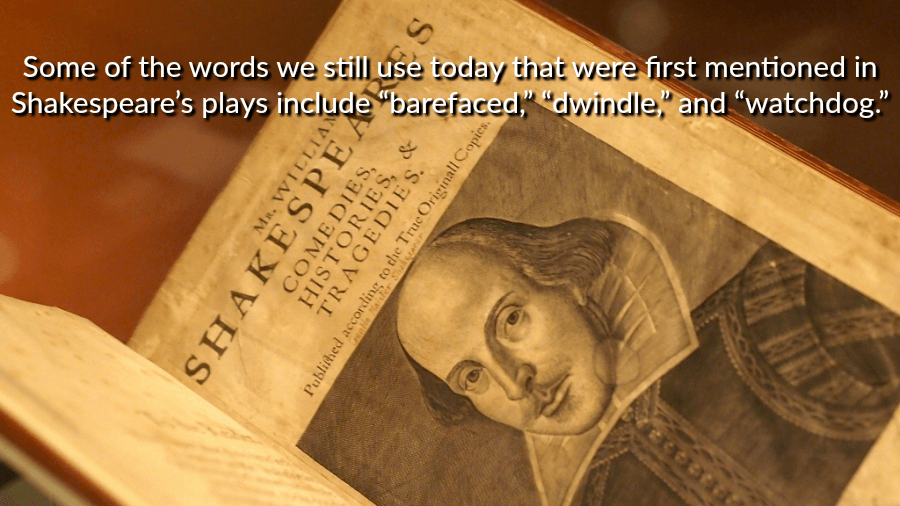 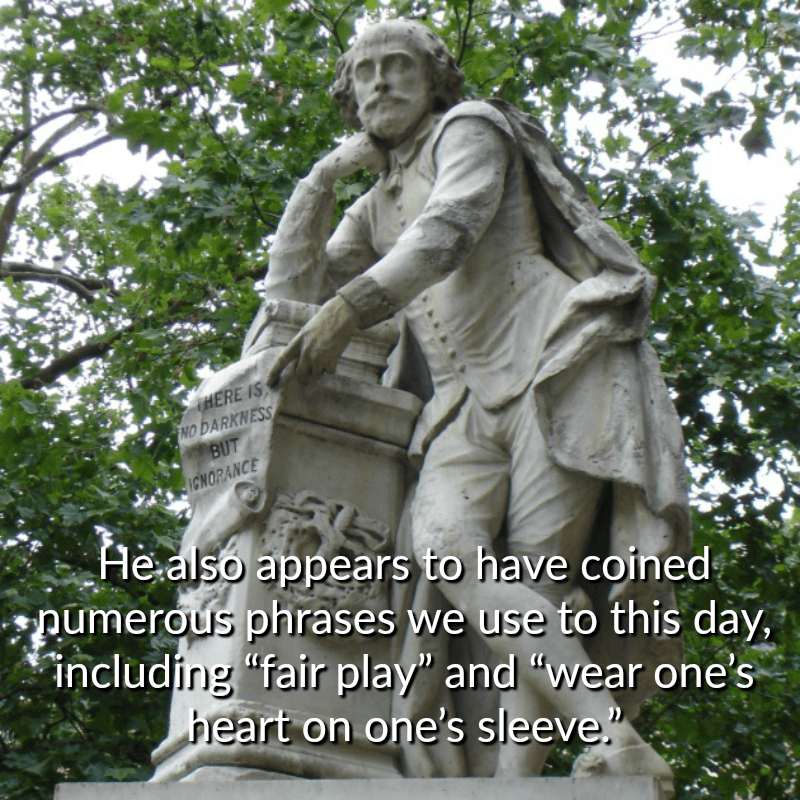 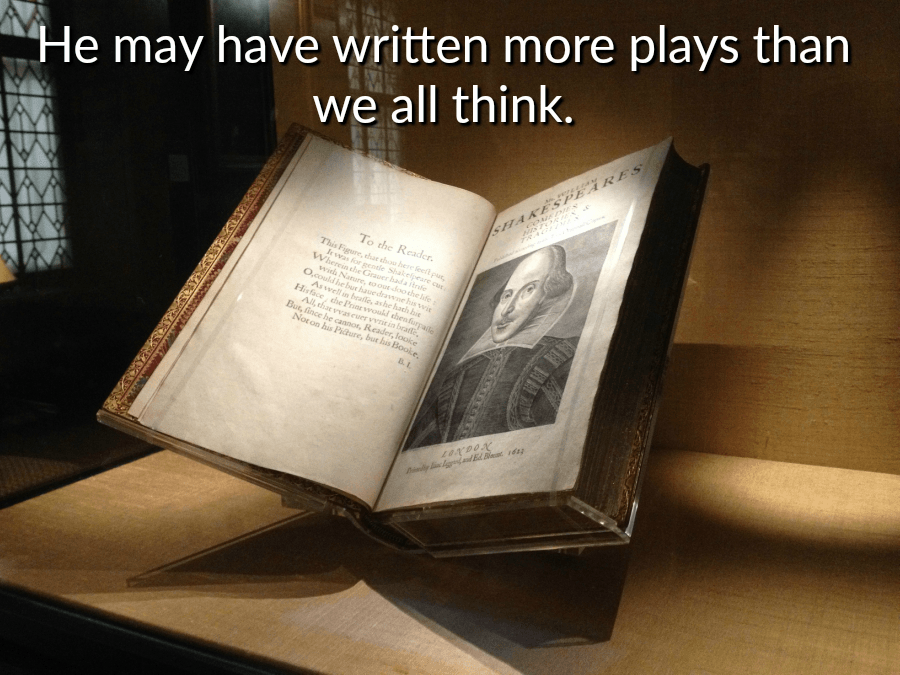 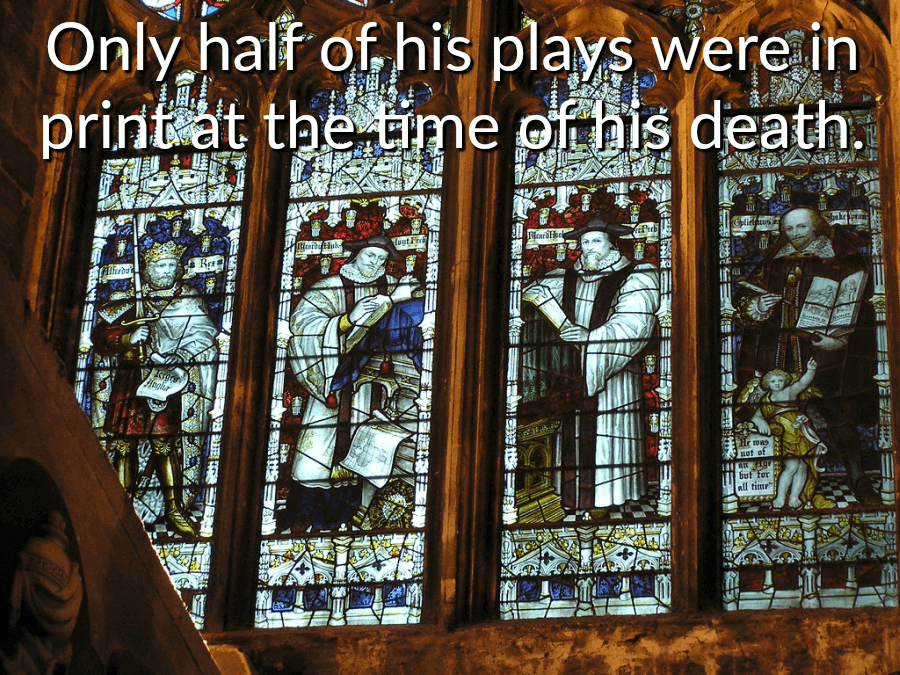 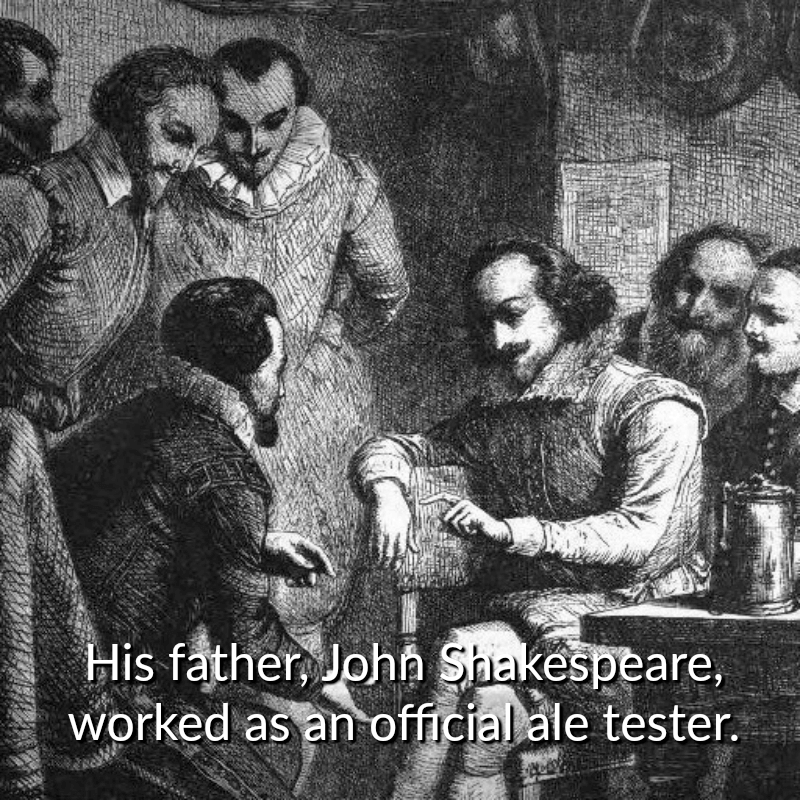 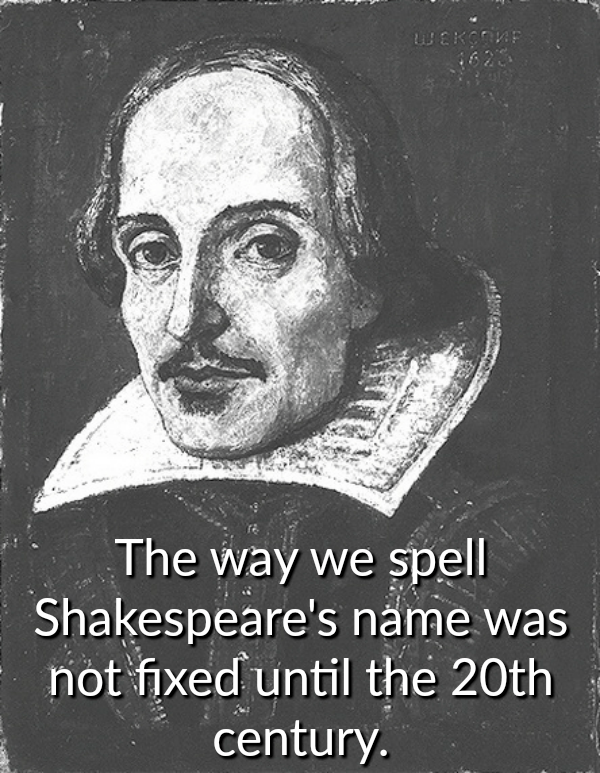 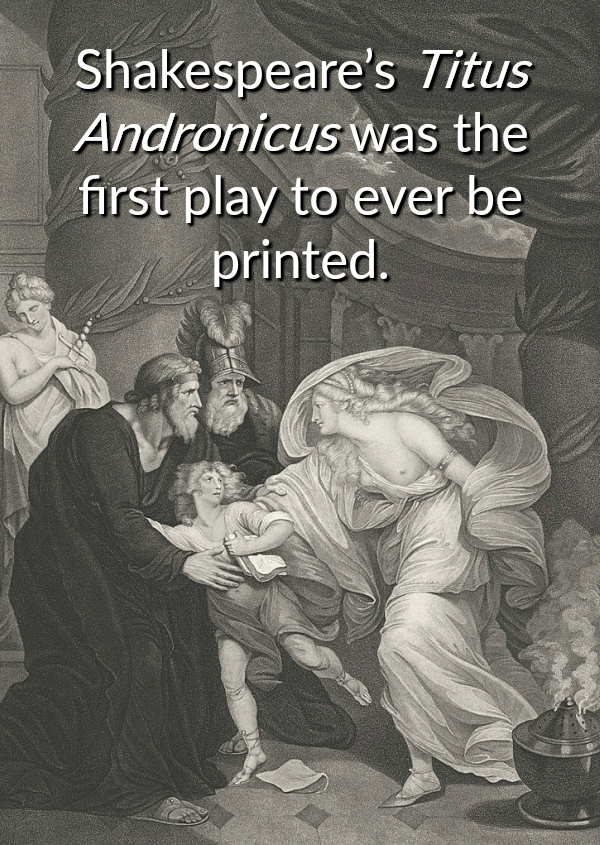 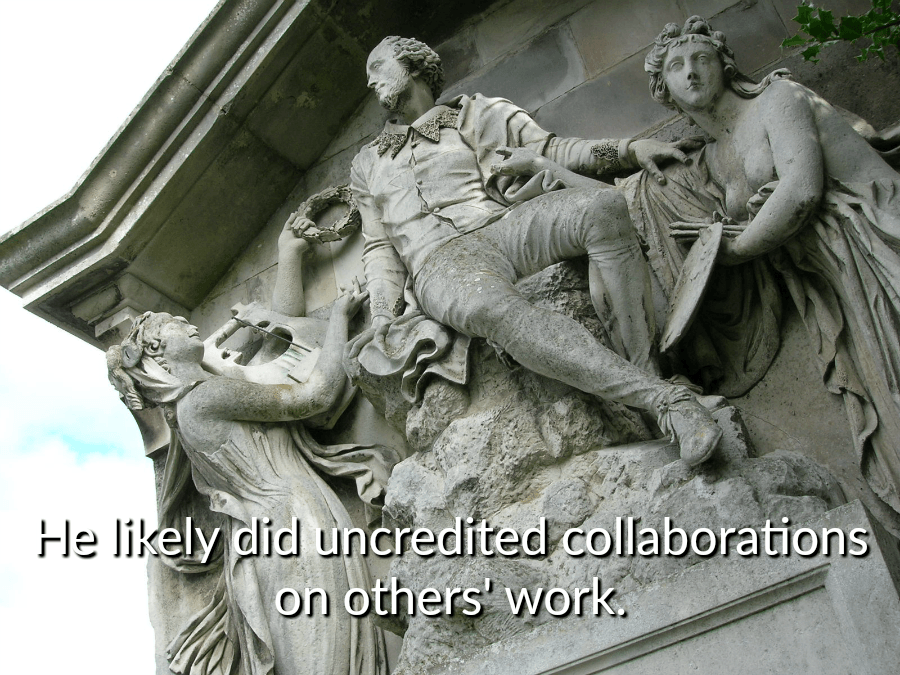 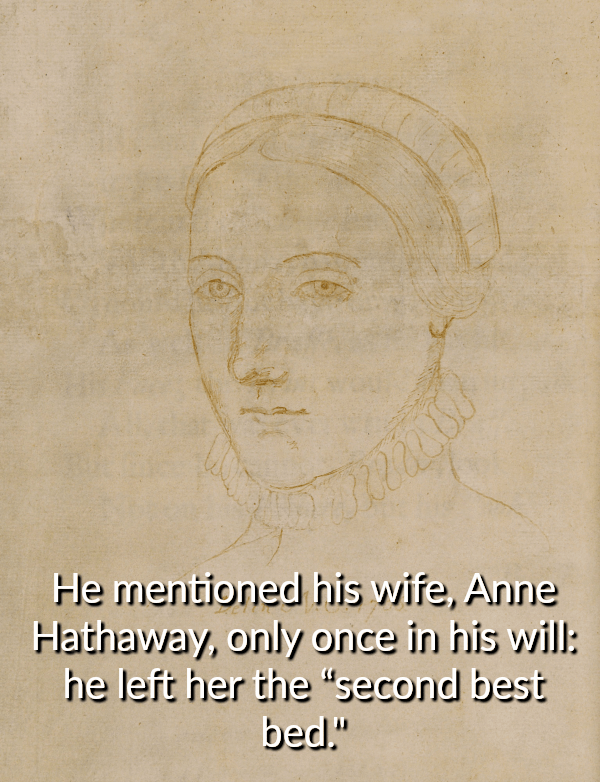 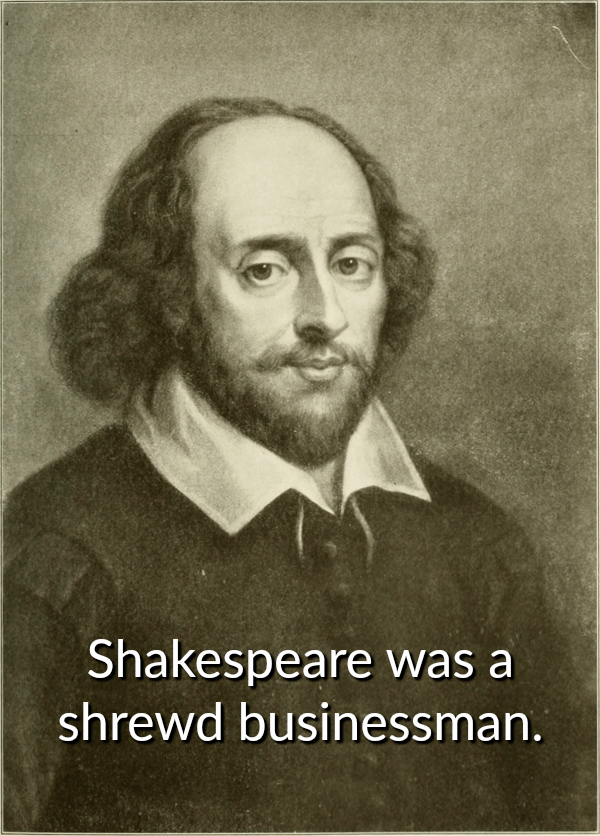 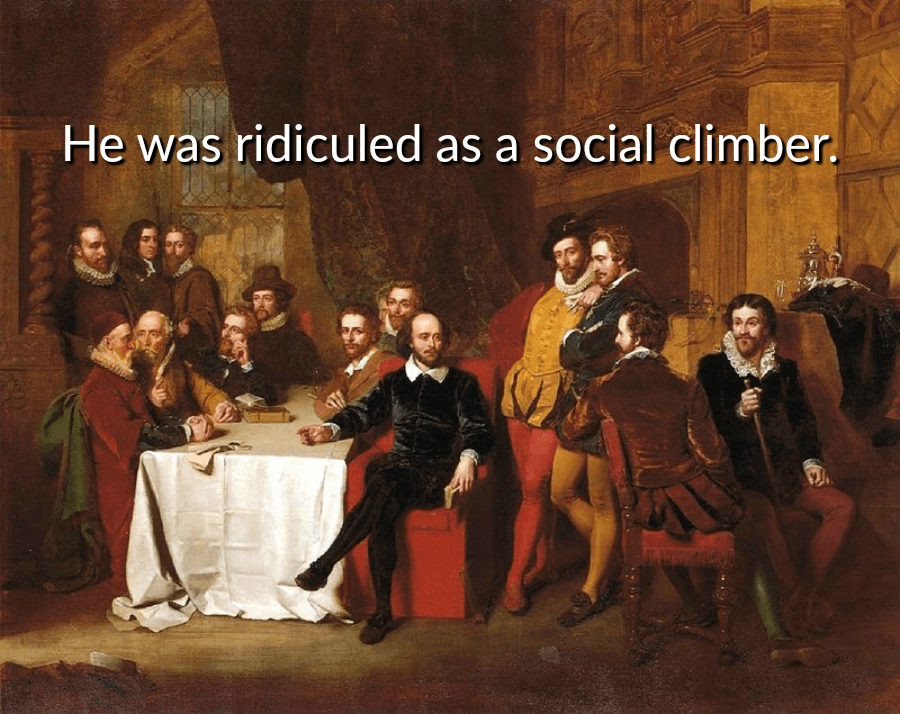 1 of 28
His parents were illiterate. Nevertheless, Shakespeare apparently learned how to read and write just fine. Wikimedia Commons
2 of 28
He was a tax evader and illegal food hoarder. He was prosecuted for amassing food and selling it at inflated prices to his neighbors and tradesmen during food shortages of late 16th and early 17th century. Nevertheless, he left 10 pounds to the poor of Stratford in his will. Salman Javed/ Flickr Commons
3 of 28
Shakespeare was not just a writer but also an actor. He acted in many of his own plays as well as the plays of others. He is said to have favored "kingly parts." Wikimedia Commons
4 of 28
Shakespeare married Anne Hathaway when he was only 18. Anne was eight years his senior and their wedding was rushed — she was already several months pregnant. Wikimedia Commons
5 of 28
We might be spelling Shakespeare’s name wrong. Over the course of his life, Shakespeare signed his name not only as "Shakespeare," but also as "Willm Shakp," "William Shaksper," "Wm Shakspe," "William Shakspere," "Willm Shakspere," and "William Shakspeare." Wikimedia Commons
6 of 28
He was a terrible speller and often spelled the same word numerous ways within the same line.Wikimedia Commons
7 of 28
Shakespeare was so worried his bones would be exhumed after his death that he had a curse placed on his tombstone. The curse, which he supposedly wrote himself, reads: "Good friend for Jesus sake forbeare, To dig the dust enclosed here. Blessed be the man that spares these stones, And cursed be he that moves my bones." It must have worked, because his bones were never moved. Wikimedia Commons
8 of 28
He may not have existed at all. According to the anti-Stratfordian theory, the philosopher, statesman, and scientist Francis Bacon was the real author of all, or most, of Shakespeare's works. Shakespeare supposedly only acted as the front man so that Bacon's reputation as a statesman and scientist would not suffer. Colin Smith/ Geograph
9 of 28
The anti-Stratfordian theory has been supported by famous figures such as Sigmund Freud, Walt Whitman, Malcolm X, and Orson Welles, among many others. Wikimedia Commons
10 of 28
Shakespeare may have been bisexual. Scholars cite the fact that some of his sonnets were addressed to a man known as "Fair Youth" or "Fair Lord."Wikimedia Commons
11 of 28
Shakespeare’s son Hamnet died in 1596 and his last descendant was his granddaughter Elizabeth Barnard who died in 1670, thus ending the Shakespeare family line. Wikimedia Commons
12 of 28
Not everyone admired Shakespeare. His contemporary Robert Greene – a well-known playwright and poet – attacked Shakespeare in his pamphlet called "Groatsworth of Wit" by calling him an "upstart crow," meaning someone who may have improved his social and economic standing but who lacks the necessary social skills. After Greene’s death, his publisher issued an apology to the "upstart crow." Wikimedia Commons
13 of 28
The image of Shakespeare you have in your head is based on an unverified portrait. While the famous Chandos Portrait may have been painted during Shakespeare’s time, there’s no conclusive evidence to suggest that it actually depicts the famous Bard. Wikimedia Commons
14 of 28
If your name is Jessica, you have Shakespeare to thank for it. The name was first used in his play The Merchant of Venice. Wikimedia Commons
15 of 28
Legendary writers like Leo Tolstoy, George Bernard Shaw, Voltaire, and J. R. R. Tolkien hated his work. Wikimedia Commons
16 of 28
Shakespeare plays have been translated into the fictional Klingon language from Star Trek. These works include Much Ado About Nothing and Hamlet.Wikimedia Commons
17 of 28
Some of the words we still use today that were first mentioned in Shakespeare’s plays include "barefaced," "dwindle," and "watchdog." Others, like "eyeball," "assassination," and "puke" are falsely attributed to Shakespeare. Farrukh/ Flickr Commons
18 of 28
He also appears to have coined numerous phrases we use to this day, including "fair play" and "wear one’s heart on one’s sleeve." Wikimedia Commons
19 of 28
He may have written more plays than we all think. Some of his works may have been lost, such as Love’s Labour Won and Cardenio.Wikimedia Commons
20 of 28
Only half of his plays were in print at the time of his death. Wikimedia Commons
21 of 28
His father, John Shakespeare, worked as an official ale tester. At the time, it was a very respectful occupation. Wikimedia Commons
22 of 28
The way we spell Shakespeare's name was not fixed until the 20th century. This was because Shakespeare spelled his name inconsistently during his lifetime, which led to editors spelling it however they pleased. In the 18th century, most editors began spelling his name as "Shakspeare" and continued to do so until 1840. Wikimedia Commons
23 of 28
Shakespeare’s Titus Andronicus was the first play to ever be printed. It was printed — or rather, pirated — by a man named John Danter who also printed a defective version of Romeo and Juliet that appears to have been pieced together from shorthand notes made during the performance. Neither play attributed Shakespeare as the author.Wikimedia Commons
24 of 28
He likely did uncredited collaborations on others' work. Similarly, it is likely that he didn't write his plays alone either. Wikimedia Commons
25 of 28
He mentioned his wife, Anne Hathaway, only once in his will: he left her the "second best bed." However, according to English Common Law, she would have also inherited one-third of his estate. Wikimedia Commons
26 of 28
Shakespeare was a shrewd businessman. Not long after he joined a famous theater group known as "Lord Chamberlain's Men," he became one of its shareholders and earned enough money to purchase an impressive house in Stratford. Wikimedia Commons
27 of 28
He was ridiculed as a social climber. He was born into a fairly poor family but managed to secure himself the status of a gentleman by applying for a coat of arms. Wikimedia Commons
28 of 28 You have most likely heard of the poet and playwright William Shakespeare or maybe even read at least one of his plays; probably Romeo and Juliet, Macbeth, or Hamlet - at some point in your life. Perhaps this was an assignment, though, and not a choice. If we're being honest, it's doubtful any William Shakespeare facts we learned as kids made much of an impression, but these interesting facts about Shakespeare may just change that.

As young people, we might've even uttered a grumble or two at having to learn weird-sounding lines and write essays on plots bearing little resemblance to reality. Indeed, almost every English teacher in every school in every country will require their students to read at least one Shakespeare play as part of the curriculum. Students analyze the archaic language and make use of the notes provided to understand the intricate — and often surreal — plotlines. However, as we grow older we realize that our studies were not in vain.

It is then we begin to realize the importance of Shakespeare's works. We can understand why people regard him as one of the greatest writers in the English language, and perhaps then want to delve into some Shakespeare facts to impress our friends with.

We suddenly notice his aptitude for highlighting human emotion. His experience in eloquent verse and his talent for storytelling highlight his uncanny study of character. Furthermore, it is thanks to Shakespeare that we have a great number of cliché (but very fitting) phrases at our disposal.

Interestingly, while we study Shakespeare's work in great detail at school – and sometimes later on in life - very little is actually known about the man who wrote the plays, the tragedies, and the poems.

This causes some to believe that Shakespeare did not exist. This may sound like blasphemy, but when you consider the elusiveness of the bard, it kind of makes sense. It comes as no surprise that there could be 27 interesting William Shakespeare facts that you didn't learn in school.

Still, Shakespeare experts rebuke this theory, claiming that a man named Shakespeare did exist, and wrote plays, tragedies and poems that made him famous. Not just in his lifetime — but many centuries later.

After this look at these interesting William Shakespeare facts, why not look at some of Benjamin Franklin's best quotes. Then, have a chuckle while reading about one of the greatest literary hoaxes of all time.