Inside The World Of The Wolf Eel, The Grotesque Yet Friendly Sea Monster Of The North Pacific

Despite its monstrous jaws and teeth, the wolf eel is actually a gentle giant that’s even known to cuddle with divers.

Few beasts strike more fear into the hearts of humans than those that make their homes in the unknown darkness. One of the most terrifying of these is the wolf eel of the North Pacific — a remarkably ugly creature that can grow up to eight feet long and sports powerful jaws and sharp teeth. However, these monsters of the deep are much friendlier than you’d ever think — and they aren’t actually eels at all.

Contrary to popular belief, the wolf eel (Anarrhichthys ocellatus) belongs to the wolffish family, though this particular specimen is notably longer than its relatives. And unlike its cousins, the wolf eel slithers through a vast swathe of the Pacific, from the waters of Northern California and the Bering Sea to the Sea of Japan.

While many people across this third of the globe might find themselves terrified by the wolf eel, these gentle giants are not what they seem. 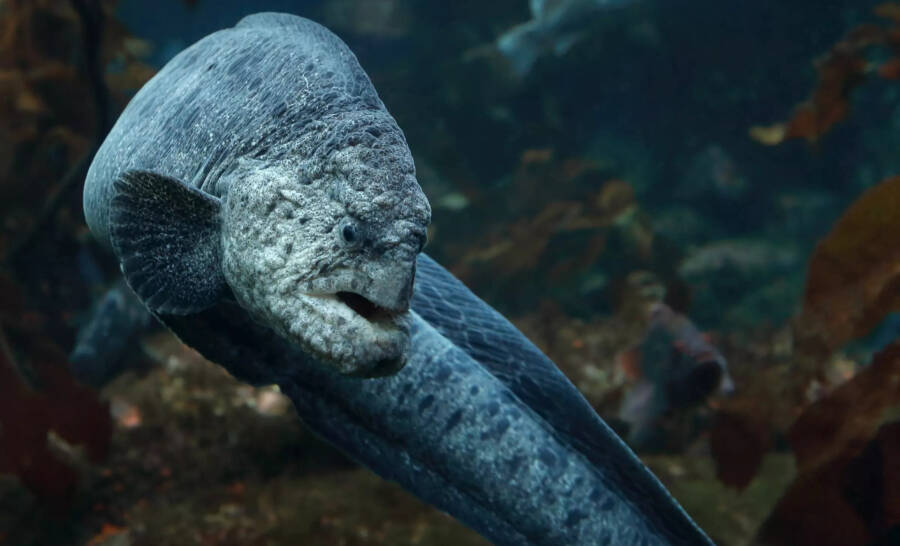 With an unsettling face and muscular body, the wolf eel resembles mythical beasts from seafaring tales of yore. In truth, however, it uses its skills to eat nothing more than hard-shelled invertebrates and has rarely bitten human swimmers. Nonetheless, they do ascend from the depths — with jaws one would be wise to avoid.

While they are typically found sheltered by coral reefs or caves, they do have to strike out in order to feast. Furthermore, the young spend most of their early lives in open water. Only as they mature, however, do the fish venture out into shallower water or comb the seafloor for food — living as deep as 740 feet. 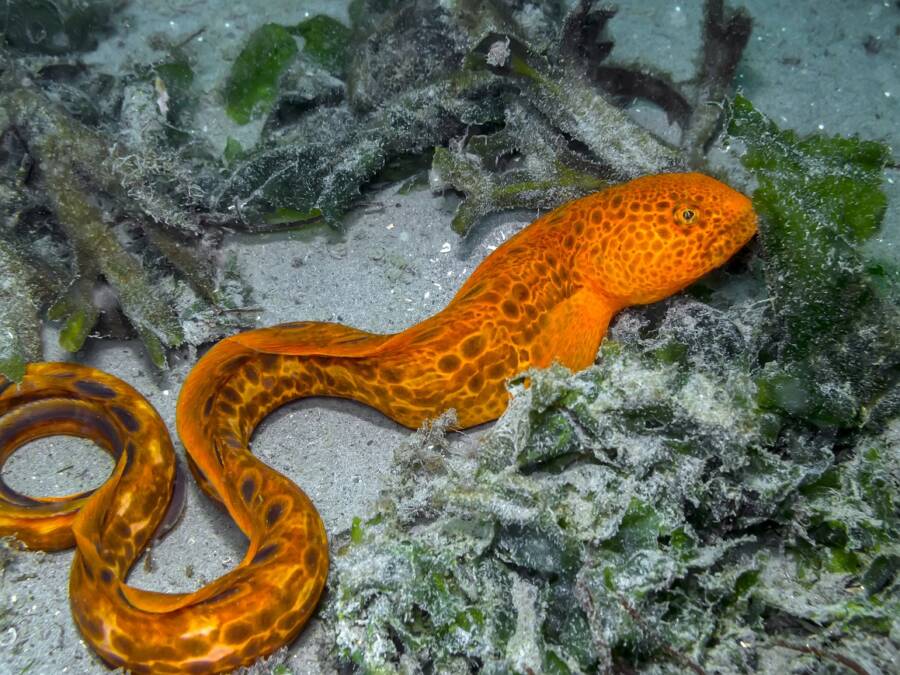 Seattle AquariumWolf eels are orange in their youth.

One can easily spot newborn or juvenile wolf eel by the glaring orange hue of their bodies. While it takes time for it to fade into the uniform gray of an adult, wolf eel set out to hunt after a few days following birth. Perhaps just as impressive as their natural-born survival instincts are the reproductive habits.

The Heartwarming Family Life Of This Monstrous Creature

Wolf eel are not only monogamous but take care of their young as a cohesive parental unit. The female lays up to 10,000 eggs at a time, beginning at age 7 — with an average lifespan of 25 years for both genders. After doing so, the female wraps her body around the eggs, as the male wraps his around hers.

The female periodically writhes against her eggs to circulate oxygenated water around them, and after spending four months in their eggs, the young wolf eel hatch — ready to feast. Fortunately for humans, their daunting faces and explosive bites are rarely a threat. 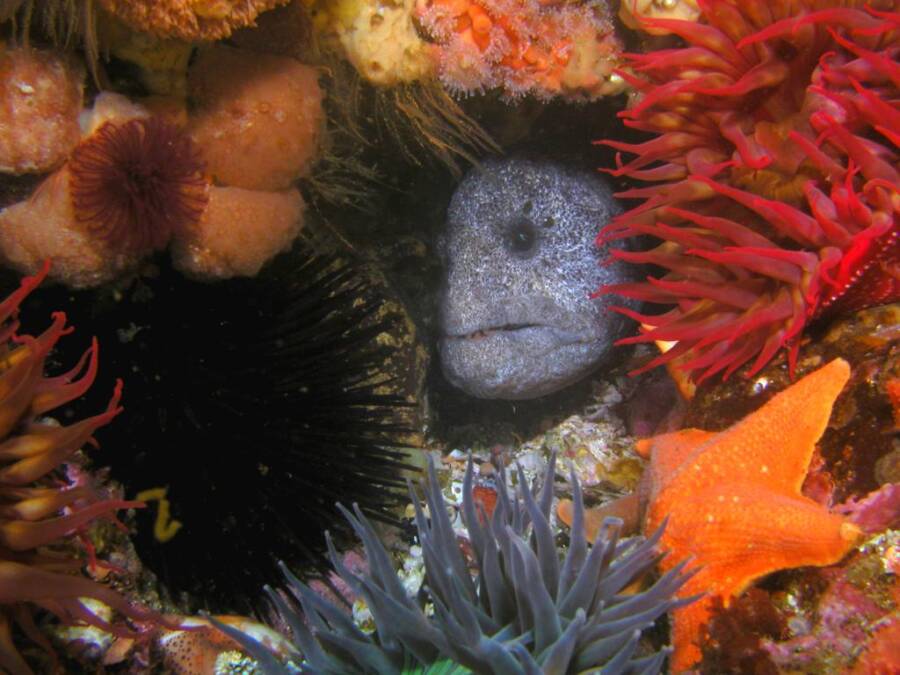 Flickr/California Department of Fish and WildlifeA wolf eel in its cave.

“They’ve got faces only a mother could love,” said Scott Reid of the Monterey Bay Aquarium. “Their jaws are very strong and if you got your finger in there you’d regret it. But they’re really slow. It may be a vicious-looking eel, but it totally has the opposite temperament.”

Threats To The Wolf Eel’s Future

Not unlike a snake on the ground, the wolf eel uses its body to propel itself forward. It essentially curves into an S-shape to push forward across the sea. While the young begin their feeding as 1.6-inch larvae that consume zooplankton while drifting on currents, active hunts with their jaws and canines begin within days.

Striking at their prey is done in the same manner that swimming is — a wolf eel coils into an S-shape to lunge forward. A young specimen has yet to grow its molars, however, and focuses primarily on catching small fish with their snaggle-toothed canines. The adults, meanwhile, essentially crush their enemies in half. 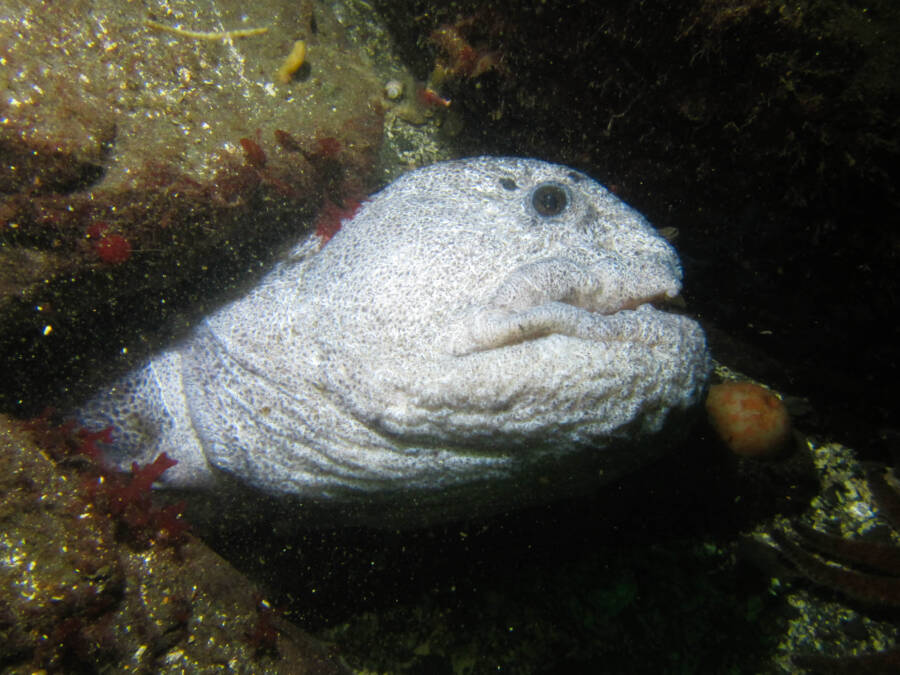 A mature wolf eel seeks out hard-shelled invertebrates like crabs, sea urchins, and sand dollars. Snatching them into their gullets, they clamp down with their jaws to destroy the shells and swallow the animals whole. While wolf eels have hearty appetites, they aren’t the only ones — those that hunt them are just as hungry.

“They like to hide — that’s part of what they do,” said Reid. “They’re not out there to be seen.”

Wolf eels are wise to remain undercover much of the time, but not every predator is stymied by their retreat. Harbor seals in Northern California have been observed sneaking into their caves and ripping wolf eel out with abandon. Unfortunately for the wolffish, its offspring is far easier to catch.

The unguarded youth are often swallowed up by a variety of predators as they drift along their currents. From kelp greenling to rockfish, hungry ocean dwellers have no qualms about feasting on the newborn competition. 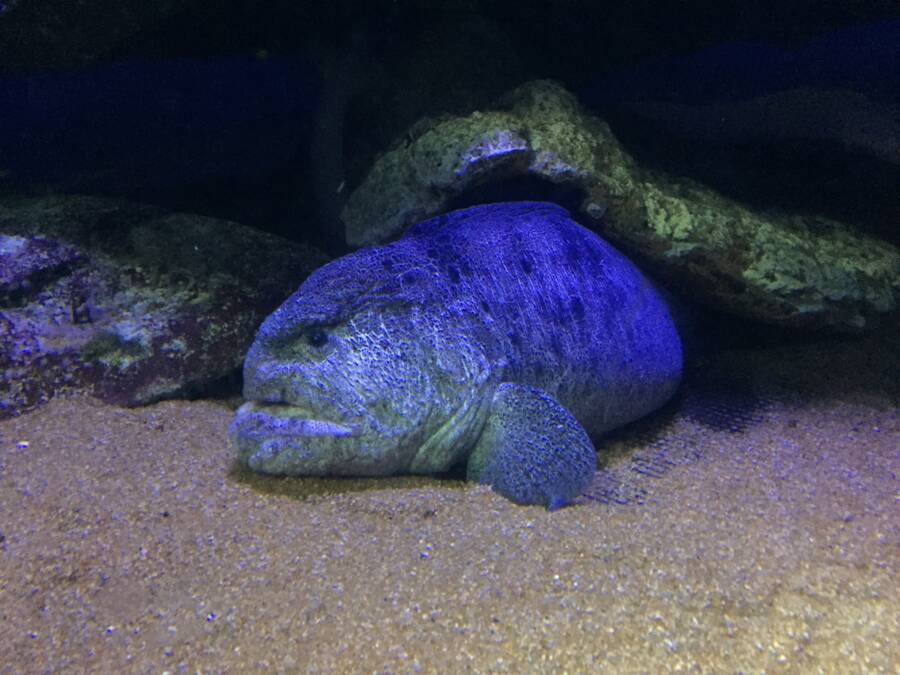 However, the wolf eel faces its gravest danger from mankind. The species is often caught in fish traps and crab nets, and are threatened by pollutants in the ocean. Fortunately, conservationists have found their global population to be stable — for now.

After learning about the wolf eel, read about Medieval Europeans eating the terrifying lamprey “vampire fish” as a delicacy. Then, learn about the blue-ringed octopus being one of the deadliest animals in the world.